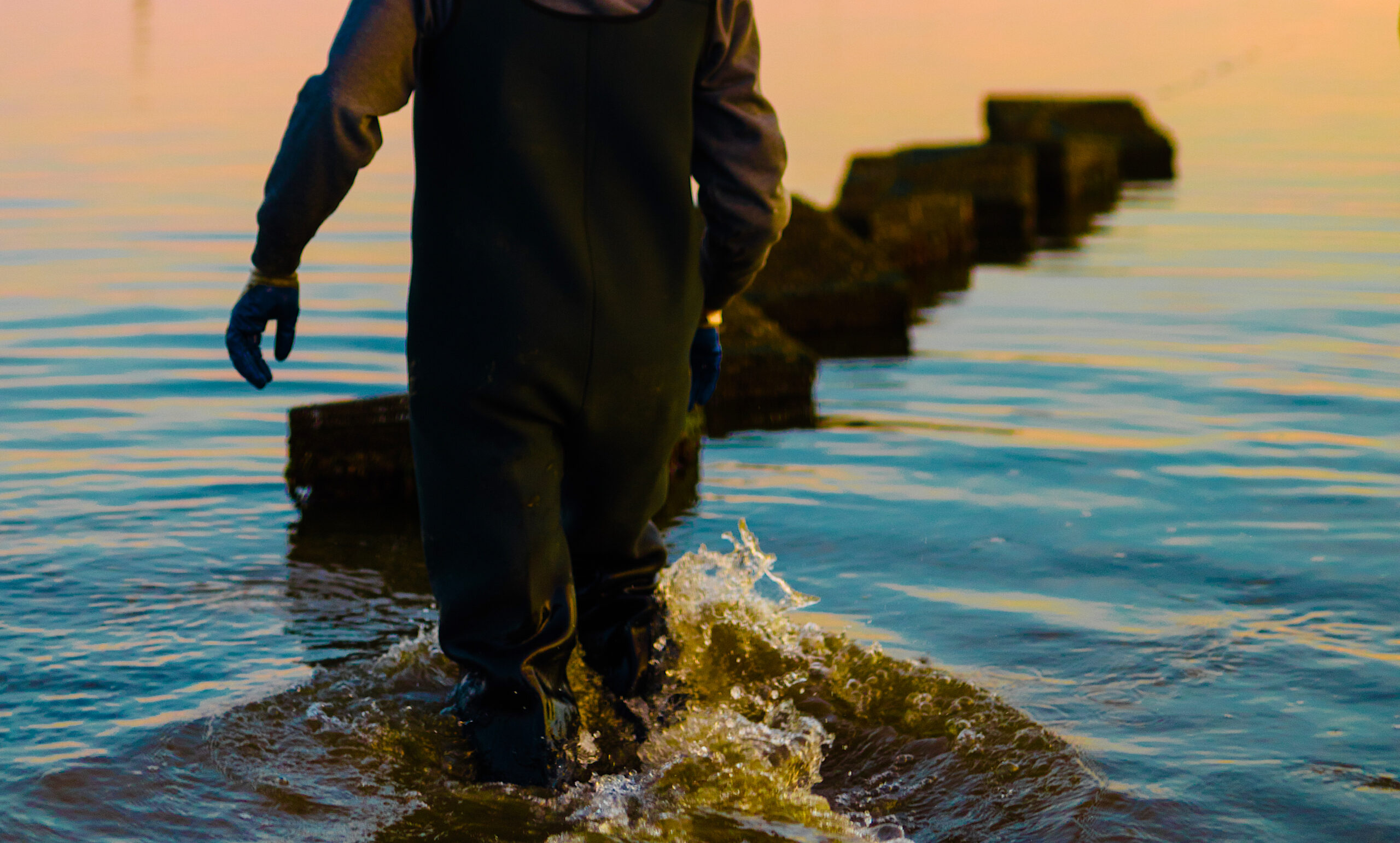 Cooler weather brings the wild harvest of oysters — and an appetite for oyster roasts and stew. Beginning in mid-October, oysters can be harvested from the wild with tongs, rakes, or by hand, in intertidal areas and shallow water along coastal North Carolina. They are also caught by dredges in parts of the Pamlico Sound.

Because of overharvesting, habitat loss, disease, and pollution, the number of oysters harvested in North Carolina dropped to a low of 42,322 bushels in 2003 from its heyday of 800,000 bushels (or 5.6 million pounds) in 1902.

Recognizing the vast ecological and economic benefits that oysters provide, state departments, nongovernmental organizations, and other interest groups work hard to maintain and restore the native oyster population. In fact, the N.C. Division of Marine Fisheries has worked since the 1950s to regulate the oyster harvest and enhance reef habitat.

Interest also has turned to oyster farming (“aquaculture”) as a way to sustain the supply of oysters for consumers — and year-round at that. But it remains unclear whether aquaculture can provide equivalent levels of habitat for a diverse collection of aquatic animals, including many important commercial and recreational fish species.

Scientists compared consumption rates by fish and invertebrate predators between oyster reef and aquaculture operations for the Eastern oyster during various times of the year at 12 locations in Rhode Island, Virginia, and North Carolina. They measured the relative feeding intensity of predators at four different types of site: natural reefs, aquaculture sites using gear on the estuary bottom, aquaculture sites using off-bottom gear, and a control site with bare sediment.

To do so, the research team used the “squidipop,” a piece of dried commercial squid tethered to a garden stake and inserted approximately eight inches above the surface of the sediment. They set out 25 squidpops at each of the four habitat types at all 12 study locations. They scored each squidpop as “present” (uneaten bait) or absent (eaten bait) after 1 hour and after 24 hours.

After 24 hours and across all sites and study months, consumption rates were the greatest in the summer and declined through the fall and winter in North Carolina and Virginia. In Rhode Island, consumption was greater in October than in July. The scientists also found that the rate of squidpop consumption depended on the type of study site.

Examining loss of squidpops after only one hour revealed similar results, but there also were a few differences. The average consumption rate was about the same at natural oyster reefs and on-bottom aquaculture sites, but overall consumption was particularly low after 1 hour, (likely the reason no significant difference was evident overall). However, higher consumption beneath off-bottom floating bags compared to adjacent sediment was significant at one hour and even stronger afterward.

Despite poor visibility across most sites, GoPro footage provided anecdotal examples of blue crabs, juvenile black sea bass, pinfish, and other predators interacting with the squidpops.

This study revealed that certain types of oyster aquaculture bring comparable or greater ecological benefits than natural reefs, suggesting an important role for this novel habitat in maintaining coastal fisheries.

This research was financially supported by a North Carolina Sea Grant award (to Fodrie), the David H. Smith Postdoctoral Research Fellowship (to Smyth), and an NSF grant OCE-1652320 (to Hughes). Lefcheck was supported by the Michael E. Tennenbaum Secretarial Scholar gift to the Smithsonian Institution.

« What Affects the Success of Divers When They Try to Remove Lionfish?
How Do Humpback Whales Behave Around Busy Atlantic Seaports? »