Story and Photos by Chuck Weirich

Earlier this year, I had the opportunity to accompany Cory and Callie Carawan on a trip to the West Coast. They wanted to survey the shellfish aquaculture industry in Oregon and Washington.

The Carawans are involved in Mattamuskeet Seafood, a family business that processes crab and shucks oysters in Hyde County. To help ensure a steady supply of oysters to the company, last year Cory founded Striking Bay Shellfish and began setting oysters on his lease in Germantown Bay.

And that’s why we made this trip: To see West Coast shellfish aquaculture processes firsthand while picking up some ideas for Cory and Callie to apply to their young and developing venture in North Carolina.

First, we went to Whiskey Creek Shellfish Hatchery, adjacent to Netarts Bay, south of Tillamook. Our hosts were Alan and Chrissie Barton who oversee the hatchery’s daily operations. The Bartons had spent some time working to establish a shellfish hatchery near Swansboro so they were familiar with our southern accents.

Whiskey Creek is the largest shellfish hatchery in the United States. It provides oyster, clam and mussel seed for commercial and restoration efforts.

The hatchery also has been at the forefront of ocean acidification research and adaptation. Beginning in 2007, the hatchery struggled with mass mortalities of their shellfish seed associated with highly corrosive upwelled water off the Oregon coast. In the past few years, thanks to research and improvements in hatchery monitoring techniques, Whiskey Creek has been able to better predict and respond to changes in ocean chemistry and the negative impacts of those changes on shellfish larvae.

Next, we went to Ekone Oyster Company in Bay Center, Washington, located on the eastern side of Willapa Bay. There we met Roberto Quintana who manages a remote setting facility producing spat on shell, as well as single oysters for the company to stock or to sell to other growers. Many of Roberto’s techniques to set larvae on oyster shell are similar to what the Carawans employ in their operation in North Carolina. However, Cory and Callie learned some interesting tips and methods that may improve their business.

Then, we called on Ron Neva, owner of a wholesale and retail seafood market in Astoria called Northwest Wild Products. I had struck up a conversation with him at a local bar and grill, and Ron and invited us to visit. His products range from Dungeness crab to smoked sturgeon. During our visit, Ron and the Carawans discussed how he could get some blue crabs and eastern oysters from North Carolina. So a business deal — albeit a small one — was made.

The next morning, we made our way back to Ocean Park on the Long Beach Peninsula on the western side of Willapa Bay in Washington. There we met with Phil Stamp, who helps manage a remote setting facility for Taylor Shellfish Farms. We had a short visit because Phil was installing tanks in the facility and preparing for the 2016 setting season.

Our next stop was Shelton, Washington, which lies on Oakland Bay and is the westernmost city on Puget Sound.

It is the headquarters of Taylor Shellfish Farms, a family operation going back five generations, which has been producing shellfish since 1890. Taylor has multiple operations throughout western Washington and in parts of British Columbia. It produces a variety of shellfish, including clams, oysters, mussels and geoducks.

Gordon King, who oversees the company’s mussel farming operations, showed us the Taylor’s massive floating upwelling system, also called a FLUPSY, located on Oakland Bay. The FLUPSY provides a favorable growth environment for shellfish seed to grow large enough to be used in growout operations. Paddlewheels cause bay water to flow through mesh-bottomed containers where the shellfish seed are retained. The water carries phytoplankton, food for the seed.

Gordon also walked us through Taylor’s processing facilities and administrative headquarters, where we gained a better perspective of the scope of the company’s operations.

Gordon arranged for us to tour one of the company’s local shellfish beds. He even provided us with the necessary gear — raingear and boots because it was raining, of course, and headlamps because low tide was at about 9 p.m. Jason Ragan, who directs Taylor’s clam and oyster farming operations, brought us to Totten Inlet.

Although it was rainy and dark, we were able to get an appreciation of the true scope of the production of clams and oysters there on the growing beds at low tide. Jason explained what it takes to plant and grow shellfish. In addition, he gave us some insight on working around large tidal fluctuations and knowing if black bears are near portable toilets.

At night. In the rain.

The next day, we headed to Taylor’s large hatchery facility in Quilcene, Washington, located on the Olympic Peninsula. Like Whiskey Creek, the Taylor facility is equipped with an acidification mitigation system. The hatchery produces several different species of shellfish — in this case clams, oysters, geoducks and mussels. It is truly an impressive operation.

All in all, it was a great trip. The hospitality folks showed us at each site during our visit was phenomenal. It was fantastic to see the West Coast industry up close, make connections with the folks involved in the industry, and pick up on a few growing techniques. 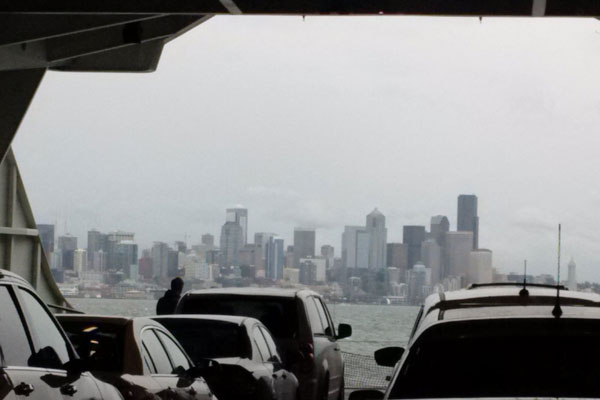 Approaching Seattle on the ferry from Bainbridge Island.

If you have questions about aquaculture in North Carolina, see our new page here or contact Chuck Weirich at chuck_weirich@ncsu.edu or 252-222-6314.