Allison Fisk is a master’s student at NC State University and a science communicator with North Carolina Sea Grant. She graduates in May 2021. 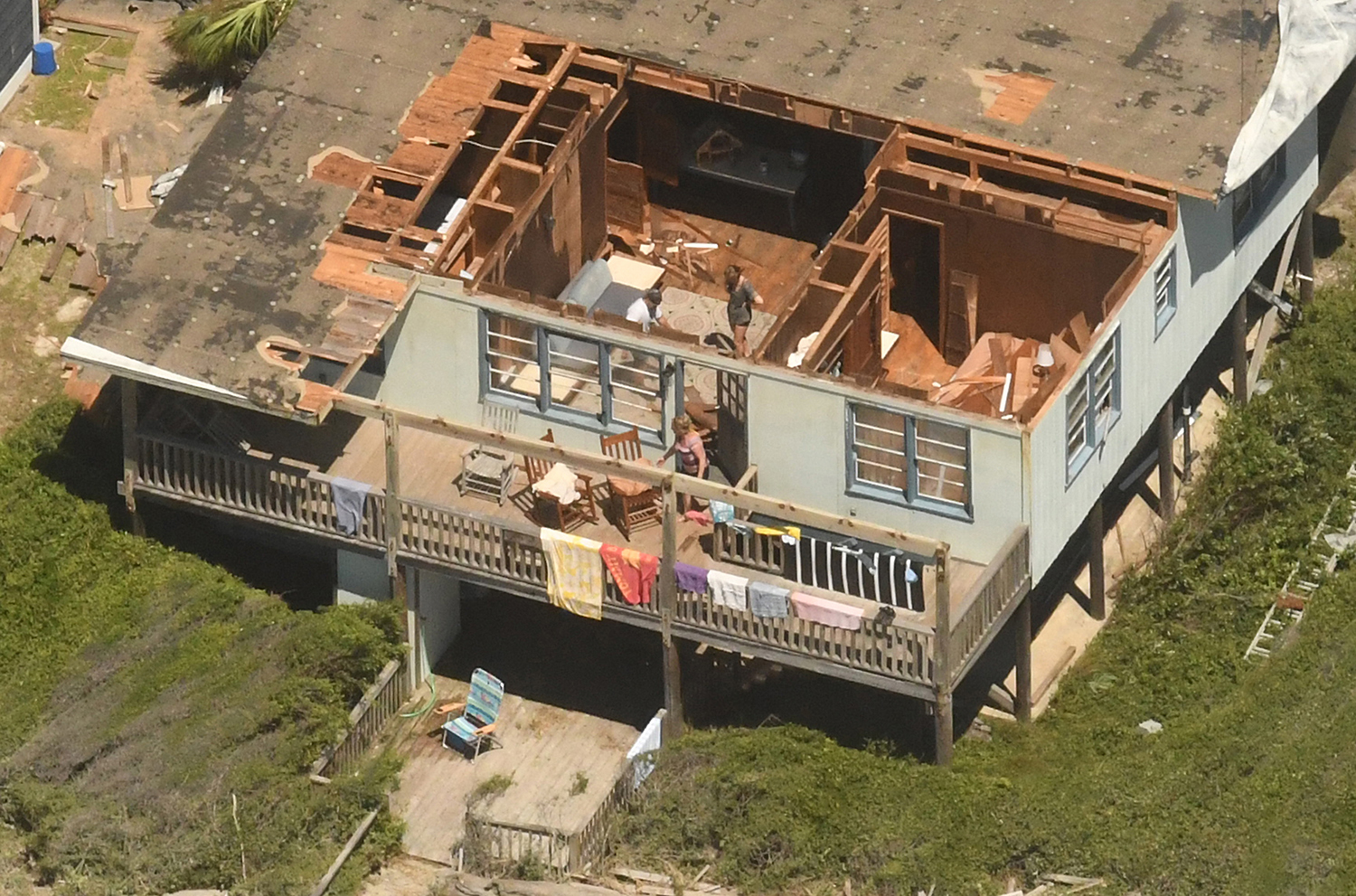 People look over their home in Oak Island, N.C., after Hurricane Isaias came ashore on Aug. 3, 2020, in Brunswick County as a Category 1 storm. Credit: Ken Blevins/StarNews.

Recent storms have had costly impacts from combinations of wind, rain, and storm surge. According to NOAA, damages totaled $11 billion after Hurricane Matthew, $24 billion after Florence, and $1.6 billion after Dorian. But some homeowners in coastal North Carolina are saving money each year on wind insurance premiums — and reducing the risk of storm damage — thanks to the FORTIFIED program.

Spencer Rogers, North Carolina Sea Grant’s coastal construction specialist, hopes that more N.C. homeowners will take advantage of the savings, including steps he has outlined in an updated memo.

“Installing wind-resistant features can protect buildings and potentially save homeowners money. Options to receive insurance rate credits for these protections are available through private insurance companies and state-mandated wind pools,” he notes.

“The first of several increasing levels of discounts is for a FORTIFIED Roof that requires an added water-resistant layer under your roofing and potentially added upgrades in how your roof is attached to the rest of the house.”

Cheryl Piner, an engineer and FORTIFIED evaluator, agrees. “Following the FORTIFIED program makes homes more resilient and durable, helping homeowners protect what is priceless during a disaster,” she says.

FORTIFIED roof and home modifications make homes more wind-resistant – but inspectors must verify the modifications before the insurance incentives are realized.

The cost for the evaluations and inspections as a FORTIFIED roof is installed is about $600. Rogers notes the up-front cost is relatively small compared to the cost of damage — and the FORTIFIED program offers incentives that pay toward this cost.

For example, homeowners can qualify for wind-mitigation credit that would lower insurance premiums with a FORTIFIED roof. Other grants and incentives are available to coastal homeowners interested in the FORTIFIED home program, as well.

Houses built by Habitat for Humanity are durable because those homes typically are built by teams of volunteers who like to drive nails, Rogers notes. Structural wind resistance is controlled by the connections, such as nails or screws — and more volunteers use more fasteners, he adds.

The underlayer beneath the shingles that are added on FORTIFIED roofs also helps to prevent water damage in the case of high winds knocking shingles off – which results in the rain getting inside the house.

“I witnessed extensive damage to homes on Topsail Beach after Hurricane Florence,” Piner says. “The homes were effectively flooded from water coming in from the roof which then required full gutting and rebuild for the interior of the homes.”

Habitat for Humanity aren’t the only ones using a FORTIFIED Roof. Homeowners who are reroofing are also upgrading their roofs to be more wind resistant.

As a barrier island resident, Sara Mirabilio received a letter in April 2019 from the North Carolina Insurance Underwriting Association (NCIUA) inviting homeowners to apply for a first-come-first-serve grant for replacing roofing with a FORTIFIED Roof. NCIUA is better known as the state wind pool.

“My roof was 17 years old, and I already was considering replacing it. After I got the letter, I immediately went online to the web portal identified in the letter to apply,” says Mirabilio, an NC Sea Grant fisheries specialist based on the Outer Banks, and co-author of the Hook, Line & Science blog.

Her grant application was accepted, and she received $6,000 toward her FORTIFIED roof, the total cost of which was $8,500 for her 1,172 square foot home. Although that roof was more expensive than a standard roof replacement, with the grant she paid less overall — and she is very happy with both the roof and the deal. After being accepted, Mirabilio could choose up to three roofing contractors to receive bids from, which Rogers helped to select. The selected crew was done in a little over two days.

“I love my new roof. You can’t even see where the old vents were,” Mirabilio says. “It was cheaper with the grant, I got an insurance discount, and it’s a better roof.”

The certification expires six years after Sara received it. For those six years, she will get an insurance discount for her FORTIFIED Roof. She received a residential windstorm mitigation credit of over $90 per year from the NCIUA, the policy she had at the time of the install. After switching to another insurer, Mirabilio continued to receive a wind loss reduction credit of just over $90.

Not only is insurance with a FORTIFIED Roof cheaper in the long term, Mirabilio says that the roof helps to prevent major damage in high-wind areas. “It’s really important because if all windows blow out or your roof comes off, it’s a house of cards, it all falls down.”

In 2021, some N.C. coastal homeowners were alerted to another grant program for FORTIFIED roofs.

Sara Mirabilio took snapshots before, during, and after her roof upgrade. Distinguishing features are the removal of traditional roof vents for a ridge vent, and a water-resistant layer before shingles are nailed down.

HABITAT FOR HUMANITY AND FORTIFIED TEAM UP

A FORTIFIED Roof is not only an option for existing homeowners, but for new builds too. Twenty years ago, Habitat for Humanity partnered with Nationwide Insurance to build the highest level FORTIFIED for Safer Living Home. So, this kind of building is not new to North Carolina or Habitat for Humanity.

In 2019, Spencer Rogers suggested the University of North Carolina Wilmington Women Build team, led by Katherine Montwieler, request a FORTIFIED home build. His goal was to promote the FORTIFIED program, saying, “If Habitat can do it, anybody in coastal N.C. can do it.”

Rogers arranged for the materials to do the roofing work as a demonstration. He also connected with Piner, the engineer who donated her time to do the required FORTIFIED evaluations for the Women Build team.

Montwieler wanted to work on the project because “creating a team of UNCW affiliates would be a wonderful way to show our support for the Wilmington community and to build camaraderie and solidarity at UNCW.” The team raised approximately $5,000 for Habitat for Humanity in 2018 and $4,000 in 2019. Montwieler wanted to show “the campus and the wider audience the great work we can do together.”

With the Habitat and UNCW construction, along with Piner’s evaluation, the house was awarded a FORTIFIED Roof certificate, qualifying the resident for wind-insurance premium discounts. Cape Fear Habitat has been using similar water-resistant roofing methods since 2008, even before the FORTIFIED discounts became available, and helping protect over 150 homes. 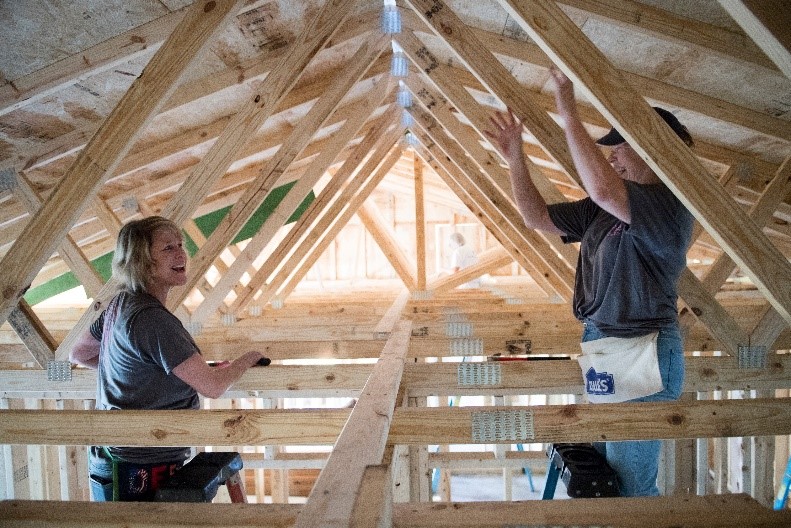 These provisions can help to make homes safer. The coastal region benefits from durable housing not only during the hurricane season, but also year-round as other wind events including tornadoes and severe thunderstorms, and nor’easters.

“The program also helps homeowners lower the overall cost of their community’s recovery after a disaster. Studies have shown, every $1 spent on disaster mitigation saves $4 in community disaster recovery expenses,” Piner explains.

North Carolina Sea Grant has helped to train building evaluators, roofers, and contractors about the FORTIFIED requirements by helping with session logistics. Rogers also provides information to homeowners about the insurance incentives available to them.

“Annual discounts on wind insurance premiums start at about 5% and can go as high as 22%. Ask your insurance agent for details” says Rogers.

There are three levels of the FORTIFIED program available in North Carolina for insurance benefits: FORTIFIED Roof, FORTIFIED Silver, and FORTIFIED Gold.

FORTIFIED Roof requirements help protect from and reduce water penetration damage by adding a water-resistant layer under the shingles that reduce the chance of rainwater getting into the house if the roof covering is damaged, according to Rogers.

Some home builders already use this process, one that can be done with roof replacements that take place about every 20 years, even without a storm. By upgrading to the FORTIFIED Roof, homeowners can minimize serious water penetration damage that can follow even minor roofing damage. “Roofing losses compared to internal structural post-hurricane damage surveys have found water penetration damage can be 3 to 10 times more expensive than the cost to repair the roofing damage, losing sheetrock, wiring, etc.,” he adds.

The FORTIFIED Gold home adds a custom engineering review from foundation to roof. Higher levels are easiest to complete in new homes but can often be accomplished as upgrades to existing buildings.

Separate insurance premium discounts are available for specific features including a hip roof or glazing protection with certified storm shutters or impact-resistant windows.

Ask your insurance agent for details to see if you qualify.