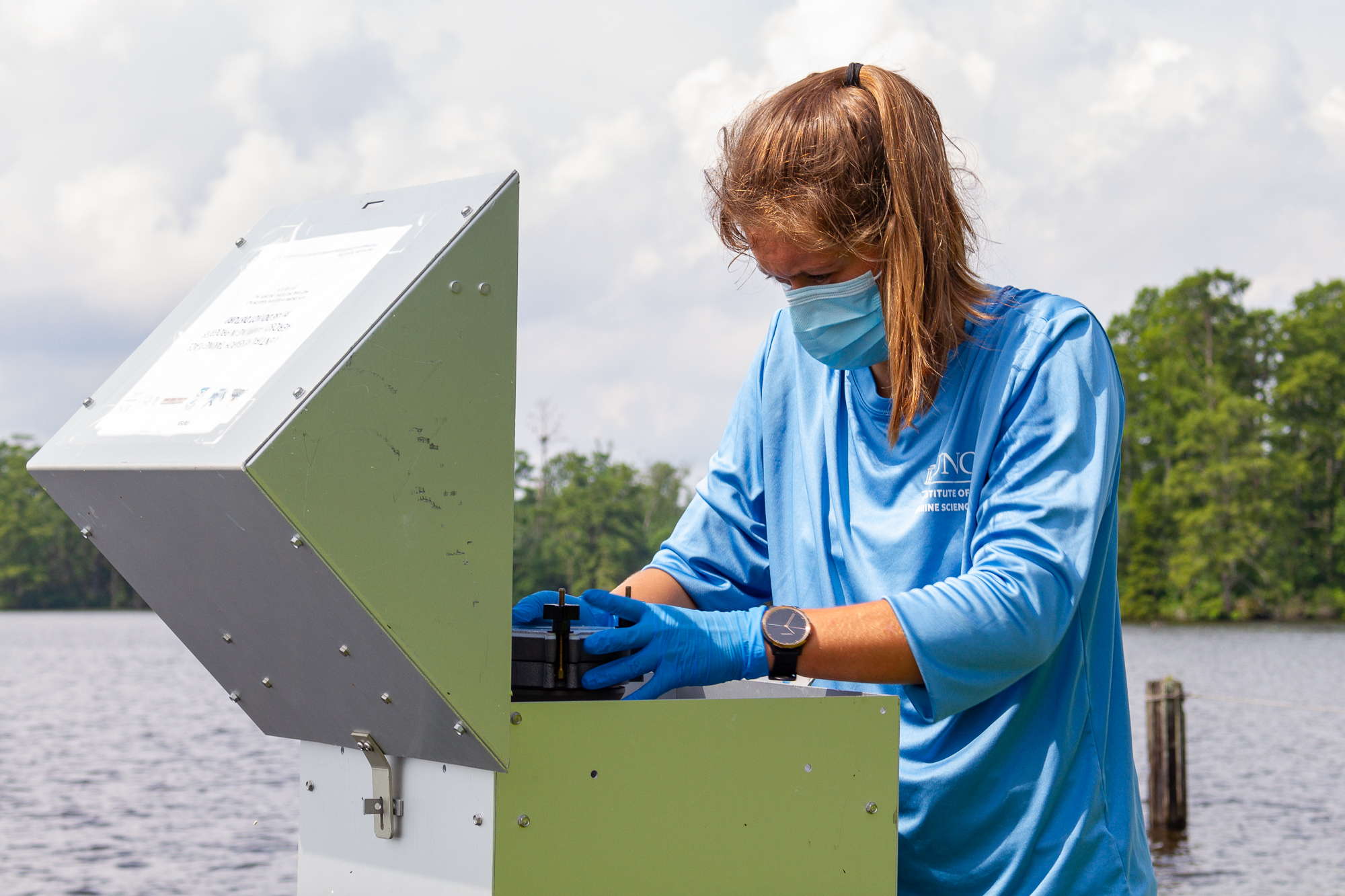 Cyanotoxin exposure has been linked to respiratory distress, but the long-term health implications are unknown. Haley Plaas’s research investigates the formation of aerosols that carry such toxins during blooms. Photo by Abe Loven.

Algae, Air Quality, and New Research on the Impacts of Cyanotoxins

In 2015, I bid my Midwestern home goodbye and set out to pursue a degree in marine science at the University of Miami, Florida. My first exposure to harmful algal bloom (HAB) research was at the Mote Marine Lab in Sarasota, Florida.

That summer, Florida endured dual toxic algal blooms: a massive red tide bloom in the Gulf, and an extensive network of blooms from cyanobacteria — blue-green algae — downstream from Lake Okeechobee. I was taken aback by the immense damage to Florida’s beaches, air quality, tourist industry, fisheries, and public health, all from microscopic algae. And it wasn’t just happening in Florida. HABs like these were expanding in aquatic ecosystems around the globe, threatening key water resources in countless communities.

So many complex environmental issues are invisible, but the hallmark green surface scum of a dense cyanobacterial bloom refuses to be ignored. These blooms often resemble toxic sludge in a children’s animated movie. The far-reaching impacts of HABs certainly had caught my attention, and I felt compelled to tackle this environmental health crisis in my career.

In 2019, I joined Hans Paerl’s lab group at UNC’s Institute of Marine Sciences. Estuaries in North Carolina are just one of the many watersheds susceptible to the expansion of HABs. While we know cyanobacterial blooms are a significant threat to water quality in coastal North Carolina, we aren’t sure to what extent blooms affect air quality.

It’s possible that cyanotoxins become airborne and are inhaled. Such cyanotoxin exposure has been linked to respiratory distress, but the long-term human health implications of this are unknown. My own research investigates the formation of aerosols carrying cyanotoxins during cyanobacterial blooms. 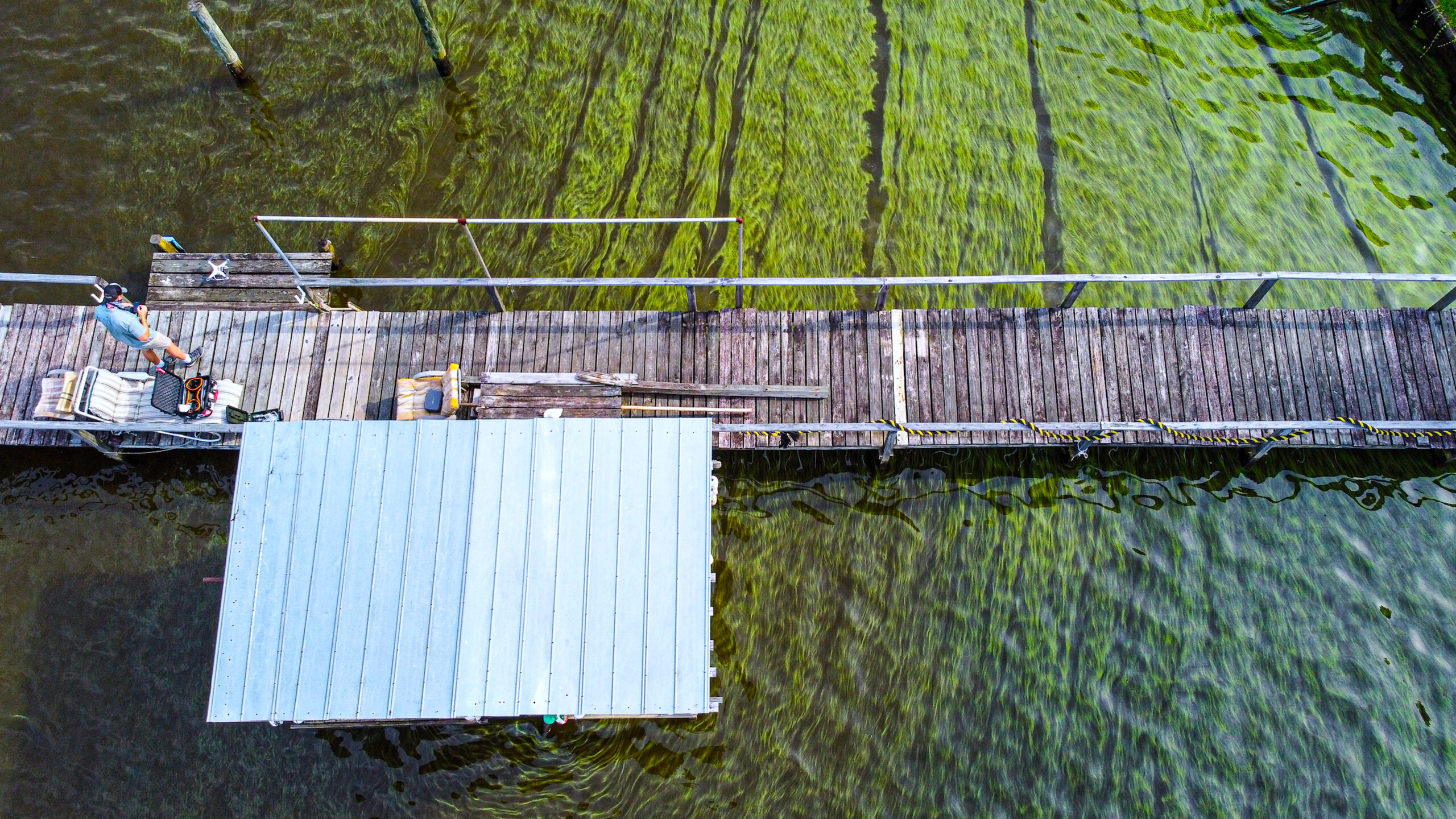 If you’ve been to the beach on a choppy day and seen a haze above the surf, you’ve seen the production of such aerosols. Spray aerosolization occurs at the water’s surface, when particles from the water are emitted into the air. During wind and wave action, air bubbles become trapped beneath the water’s surface. As they rise through the water column, they can collect suspended fragments of cells or sediments and dissolved chemicals, including toxins.

Once the air bubbles reach the surface and burst, the process ejects a spray of hundreds of microscopic particles of water into the air, like when a child blows a bubble and pops it in your face. These particles are the spray aerosols, and they carry much more than saltwater. All sorts of microbes, pollutants, proteins, and chemicals from the water also go airborne.

While scientists have long studied this process in seawater, researchers are only just analyzing it in freshwater. Due to salinity differences, freshwater spray aerosols vary in their size and chemical composition. 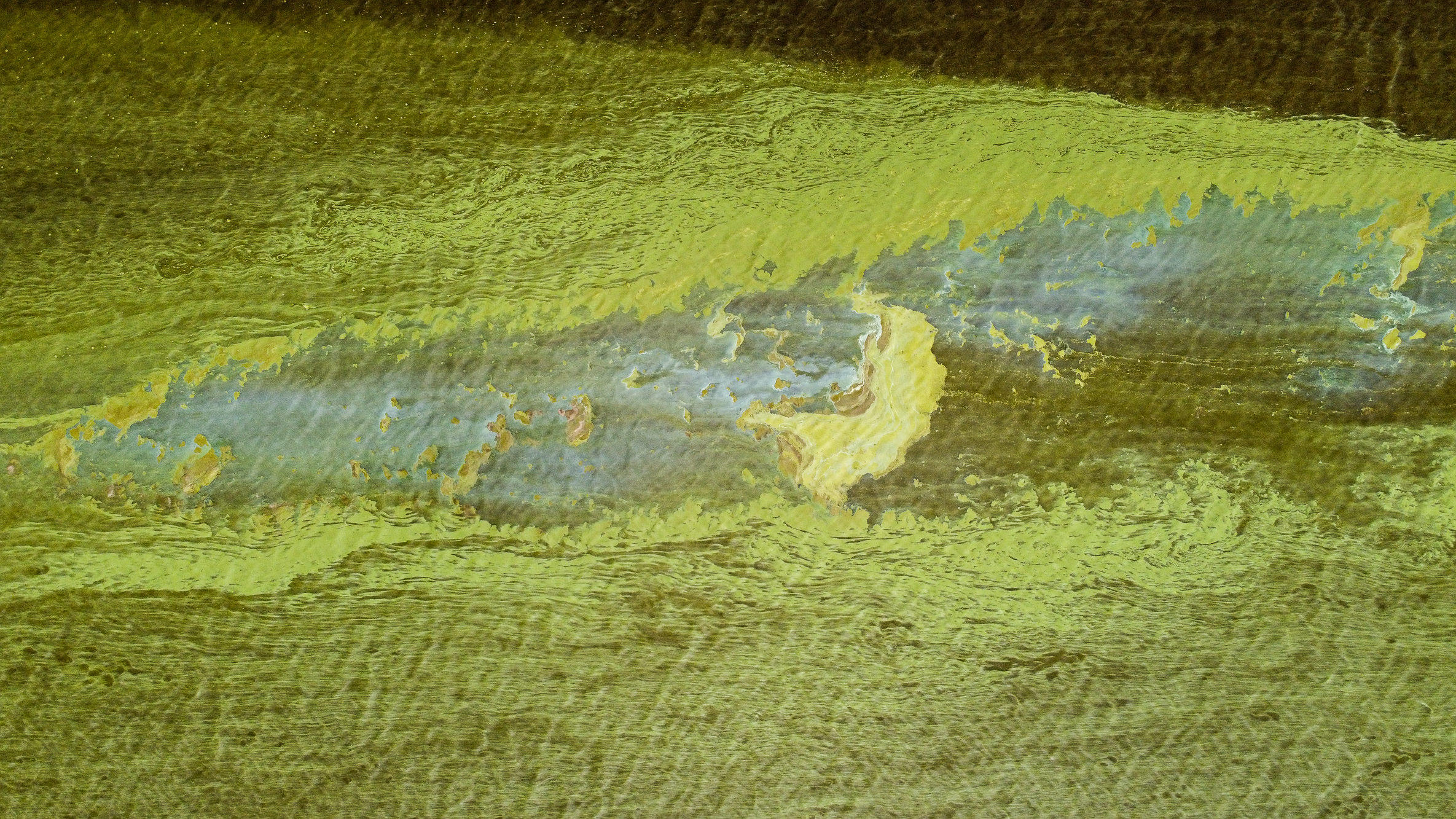 Some days, Plaas and community scientists with the Chowan Edenton Environmental Group (CEEG) operated like a band of storm chasers. When the CEEG’s network reported bloom sightings, they all jumped in their cars and sped toward those locations. Photo by Abe Loven.

Hydrophobic compounds — compounds with a greater affinity for air than water — are most likely to be more concentrated in spray aerosol than in water. This is important when measuring toxins in aerosol, because inhaling them can result in greater toxicity than simple exposure from swimming or drinking water. In addition, depending on the aerosol diameter, concentration in the air, and the ambient weather conditions, spray aerosols can remain suspended for hours to days at a time.

Much evidence suggests that spray aerosols can transport both cyanobacterial cells and toxins; however, what we don’t yet know is how frequently this happens and when it’s bad enough for people to be concerned. We are exploring these questions in the field to help the State of North Carolina determine if guidelines should be implemented and how and where interventions would be most effective to protect public health.

In summer 2020, our pilot project studied cyanobacterial spray aerosols in the airshed of the Chowan River, which has endured recurrent toxic cyanobacterial HABs over past summers. We collected water and aerosol samples and are evaluating the concentration of cyanobacterial DNA and microcystin, the primary toxin of concern.

Although we do not yet have data on cells or DNA in aerosol, preliminary findings from this study do not suggest there were quantifiable toxin concentrations in the air; however, we present this information with caution, given that water concentrations of microcystin were also low or non-detectable in our samples. 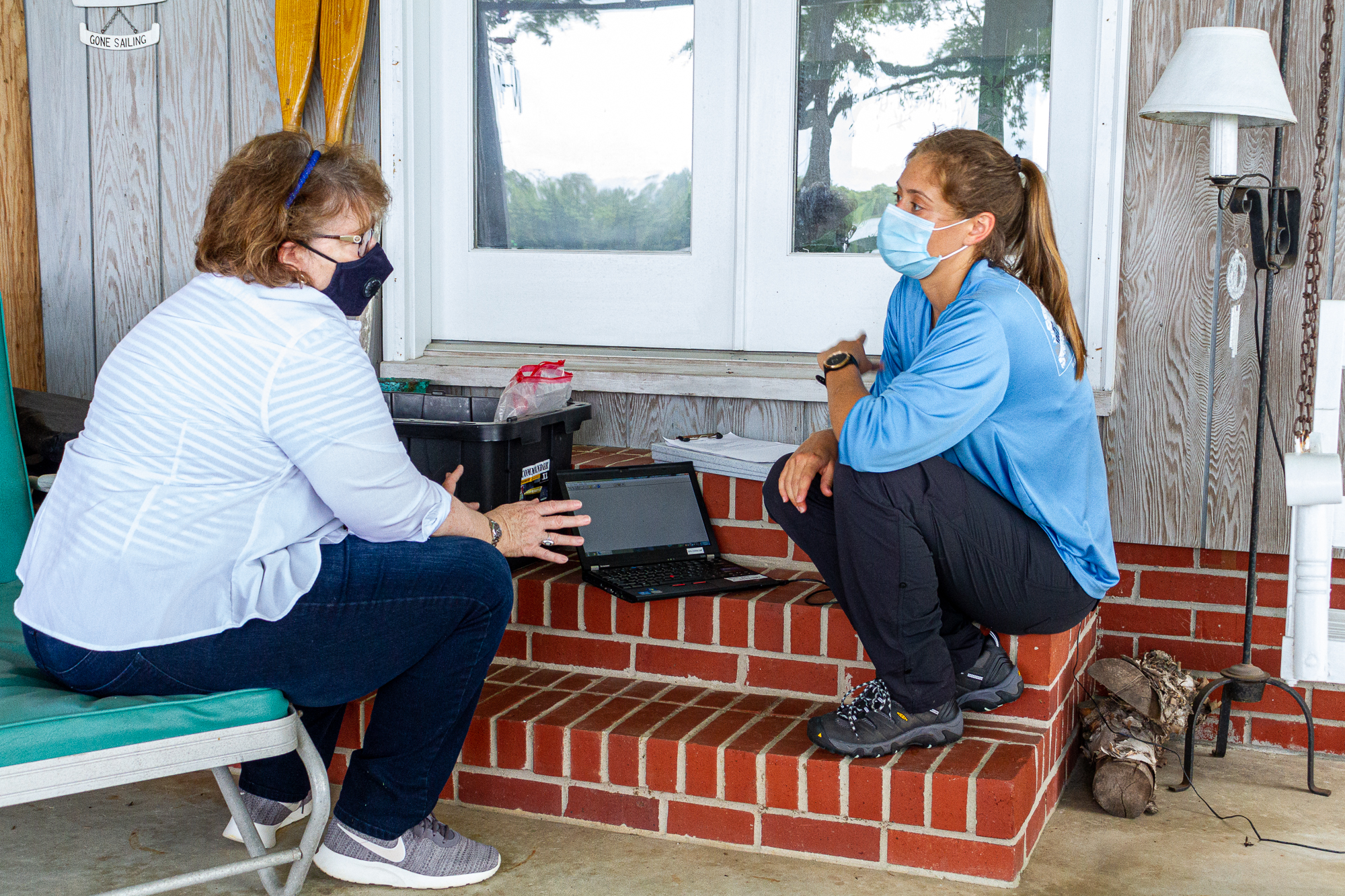 Between experiments, Haley Plaas (right) chatted with community members about their personal experiences and heard longstanding concerns about the nutrient sources that fuel algal blooms and the impact of the blooms on blue crab fisheries. Such discussions, like the one above with the Chowan Edenton Environmental Group’s chair, Colleen Karl, have helped shape subsequent research. Photo by Abe Loven.

We could not have conducted our research without the immense support we received from the community scientists of the Chowan Edenton Environmental Group (CEEG). Each and every sampling day, from 7 a.m. to 7 p.m., two or three CEEG members worked alongside our team, helping to lug equipment around, store aerosol samples, and filter water for our various measurements. (See the community science field guide for the CEEG at the end of this article.)

Our field sites were quite literally the backyards of their homes. Some days, we even operated like a band of storm chasers: When the CEEG’s network reported bloom sightings, we would all jump in our vehicles and speed toward those locations.

Between experiments, we chatted about our shared interests in research and their personal experiences with blooms over the past several decades. These discussions brought up the town’s long-standing questions about the nutrient sources that are fueling current blooms and the impact of the blooms on blue crab fisheries, providing meaningful insight to direct future studies.

The entire point of scientific research is to advance knowledge for the benefit of society, and what better way to ensure your community is benefiting from your work than getting the feedback firsthand? In coastal North Carolina and beyond, we must strive to recognize these intersections and build upon connections in our communities.

This summer, when I resume researching the toxin aerosol question, the NOAA Beaufort Laboratory will lead a study of the HABs’ effects on blue crab populations, while Hans Paerl and Nathan Hall will investigate the blooms’ causes and controls.

In summary, I hope my research will provide state agencies, especially our partners at the North Carolina Department of Environmental Quality and the North Carolina Division of Marine Fisheries, with information to keep the public safe from the adverse effects of HABs in the water or the air. It’s important to remember that our air quality is strongly linked to water quality, in much the same way that the health of our ecosystems and communities intersect.

In Full Bloom, the upcoming documentary about research and community science on the Chowan River