Prime angling from fishing piers is upon us. But, spring also ushers in the increased presence of larger sharks off North Carolina’s beaches, among them, blacktips. For those who would rather not mess with catching a shark – and who would rather keep their bait – some factors could influence the probability of encountering one.

Fishing piers and other manmade coastal structures often become a hotspot for various species of fish. The blacktip shark is one of the most common shark species people spot at fishing piers on the North Carolina and South Carolina coast.

Anglers often have seen blacktip sharks feeding off their fish scraps, but researchers have believed these sharks frequent piers based on additional factors, notably tides and temperatures, as well as other environmental cues.

However, can the presence of anglers also affect where and why blacktip sharks gather?

If such patterns exist, revealing them could help to clarify the shark’s behaviors and help to design measures to minimize chances of incidental capture and injury at piers, especially since the current population trend for blacktip sharks is unknown. 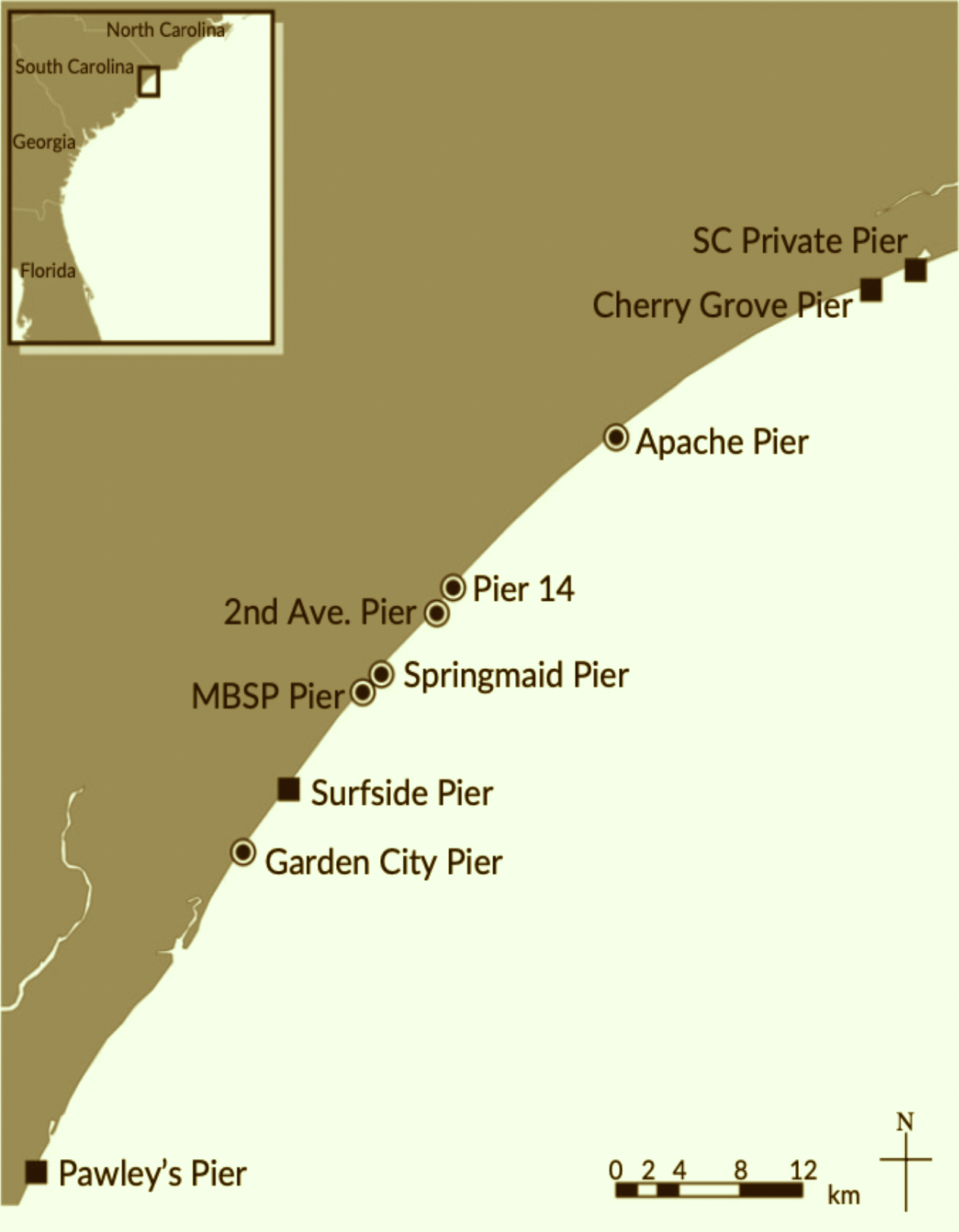 Researchers from Coastal Carolina University and the University of Miami collected data on the presence of blacktip sharks along the northeast coast of South Carolina. They captured and tagged 12 of the species with transmitters and monitored their movements between five different piers from July to November in 2016. They repeated the process with four of the five piers from May to November of the following year.

Researchers detected 9 of the 12 tagged sharks post-release but detected a majority of the sharks only infrequently at piers.

The presence of blacktip sharks at fishing piers increased during the day with increasing tidal height, barometric pressure and angler count.

Wind speed and water turbidity did not appear to affect the presence of blacktip sharks.

Most of the blacktip sharks remained at the same pier where researchers originally had tagged them. The sharks made a higher number of visits and showed more movement around South Carolina’s Pier 14, 2nd Avenue Pier, and MBSP Pier.

Although this study drew on a very small sample size, it suggests that the availability of food and prey may be influencing the behavior of blacktip sharks at piers. Fish scraps and bait from anglers provide food sources for these sharks and attract other fish, which in turn also become prey for blacktip sharks. Such considerations can help inform management of coastal fish populations and fisheries.

Financial support for this project was provided by the Coastal Marine and Wetland Studies graduate program at Coastal Carolina University and Essex County Turtle Back Zoo. Acoustic telemetry equipment was provided by the Ocean Tracking Network and Myrtle Beach State Park.

« What’s Up With NC Shrimp?
Can Insight from Ancient Oysters Provide Solutions for Modern Oyster Management? »