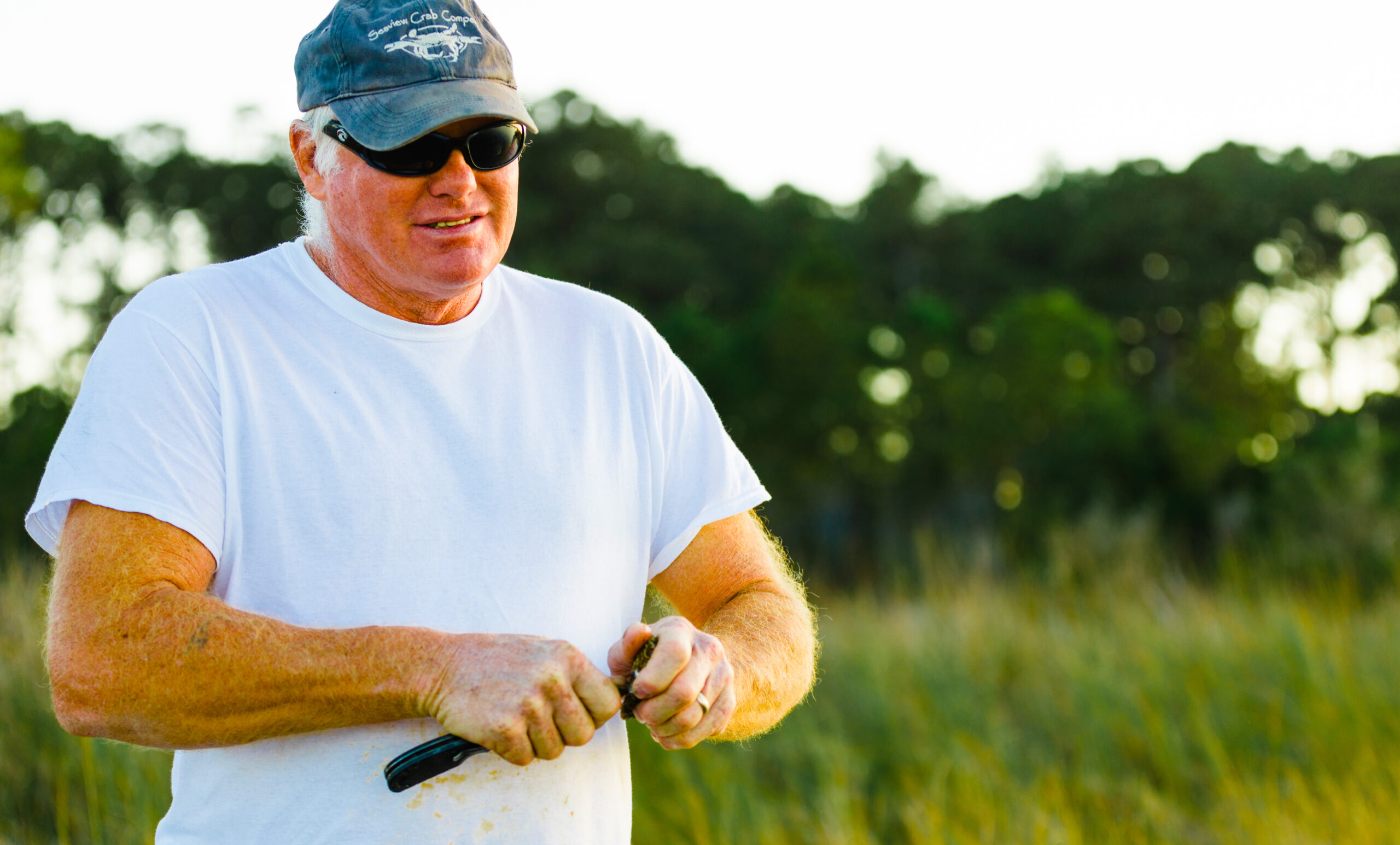 This profile celebrates National Oyster Day on Aug. 5. North Carolina Sea Grant is partnering with the North Carolina Local Food Council to profile movers and shakers and tell stories about how and why local foods work. Read more about the NCLFC’s food champions here.

Often described as the dean of North Carolina shellfish mariculture, Morris began clam farming in the early 1980s. Phillip “Skip” Kemp, then a member of the North Carolina Sea Grant extension team, introduced Morris to the concept and operations.

Over the next 10 years, Morris would make a slow but steady shift from being a 5th generation commercial fisherman to becoming a full-time shellfish farmer, drawing upon his knowledge of working the waters of Core Sound, Styron Bay and Nelson Bay.

Morris looked to mariculture as an opportunity to provide a balanced annual income by controlling the cycles of planting and harvesting. And as others saw his success, a small growers’ cooperative evolved. 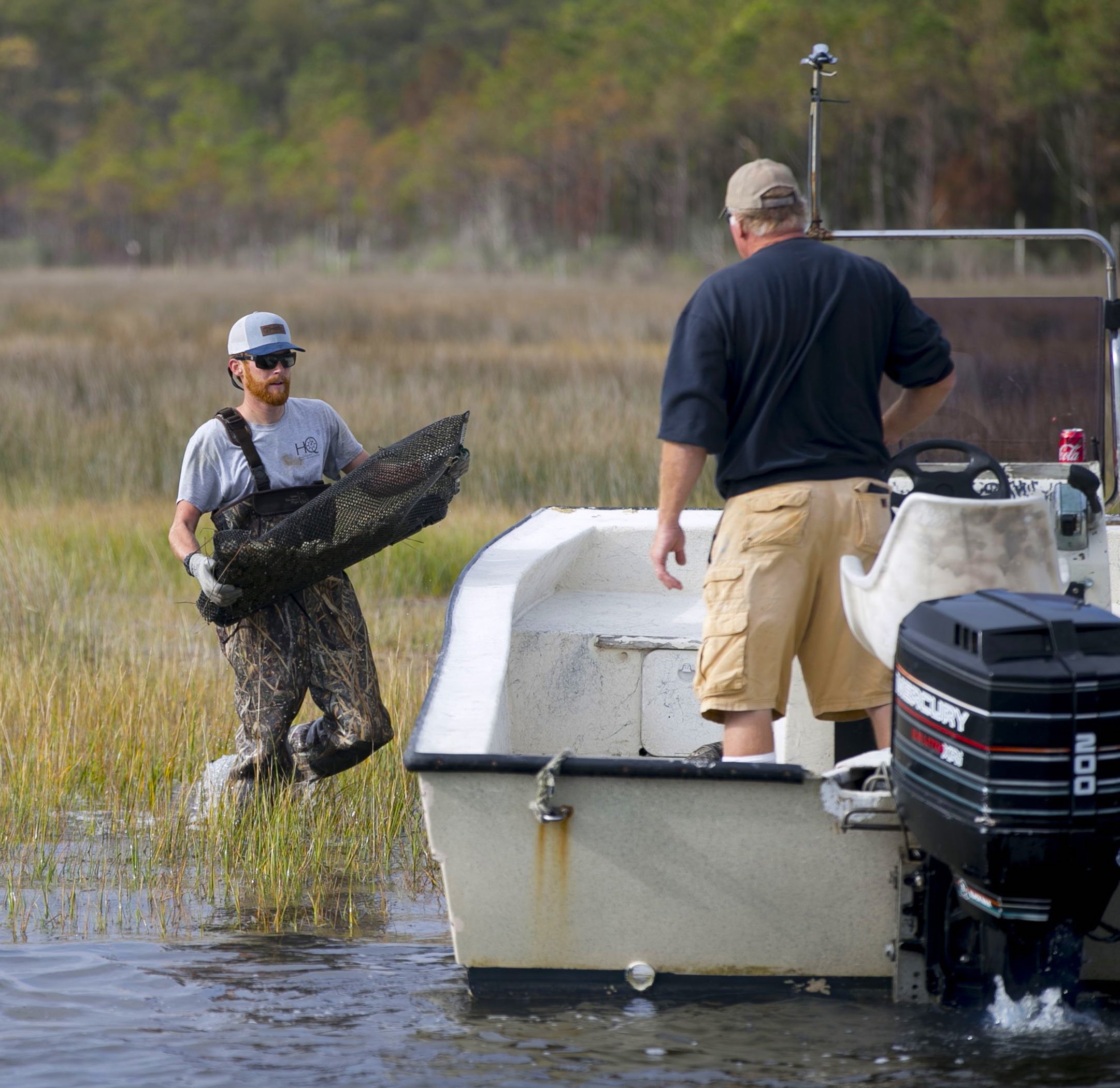 Joe Harned retrieves an oyster cage from the marsh grass on November 9, 2018 in Sea Level, N.C. Hundreds of oyster cages used to grow oysters to maturity were displaced during Hurricane Florence. Jimmy Morris of Morris Family Shellfish Farms retrieved some of them more than 150 yards into the woods surrounding his plots near Sea Level, N.C. Photo by Robert Willett/Raleigh News & Observer

“A lot of growers were fishermen in the same predicament that I was,” Morris recalls. “I helped a lot of them get started.” He still sells seed to some of those growers and their families, along with new oyster farms.

Morris’ scientific streak builds on his natural curiosity and observations from years of working waters and land. Those combined skills prompted him to start the state’s first and still longest-serving shellfish hatchery, initially set up in fish house he estimates was built in the 1920s.

In shellfish culture, hatcheries include algae production for food, broodstock conditioning, spawning, hatching, larval culture, setting, and nursery operations. Morris now provides millions of oyster and clam seed to shellfish growers. His family describes the operation as one of the largest shore-based nursery systems on the East Coast.

In 2003, Hurricane Isabel destroyed the Morris family home, along with the original hatchery, nursery and grow-out operations totaling about 8 million clams. Learning from that storm, and recognizing that his land is “a finger between two bays,” Morris built a new hatchery much higher on pilings and stronger than the previous building. 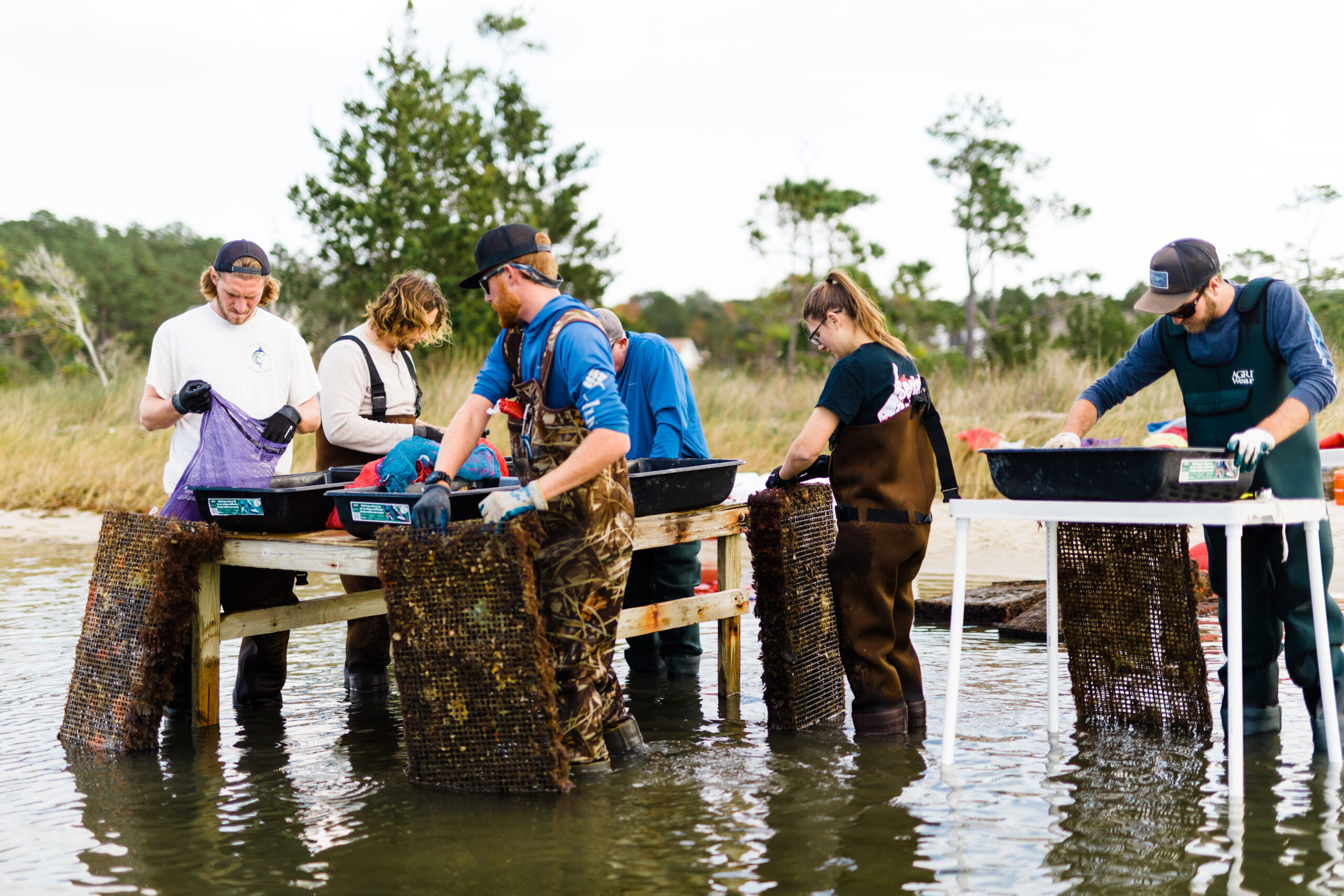 The Morris operation was among the demonstration sites for a NOAA-funded research project, which North Carolina Sea Grant led, looking at gear options for shellfish aquaculture. Photo by Baxter Miller.

But in 2018, the farm again had significant damage as Hurricane Florence hit his docks, water tanks, and building, taking all his seed. The storm even moved a cast-iron pump off a pier that was already six feet off the water.

Again, the Morris family had months in recovery mode, but they were not alone. Community members and others from afar helped repair damage— in some cases building new, but likely lifelong, friendships.

On any given day, you will find Jimmy Morris on the phone, fielding questions about how to grow oysters and clams. Beginners to experienced growers stop to chat about challenges and expectations for new gear, weather forecasts, etc. And he is still involved in North Carolina Sea Grant’s research and outreach on shellfish culture and gear.

When Ryan Bethea was making his own shift to shellfish farming, he did an externship with second-generation grower James Morris. That connected him to Jimmy, of course. “We couldn’t be here without them,” says Bethea, whose Oysters Carolina operation has been featured in Our State magazine. 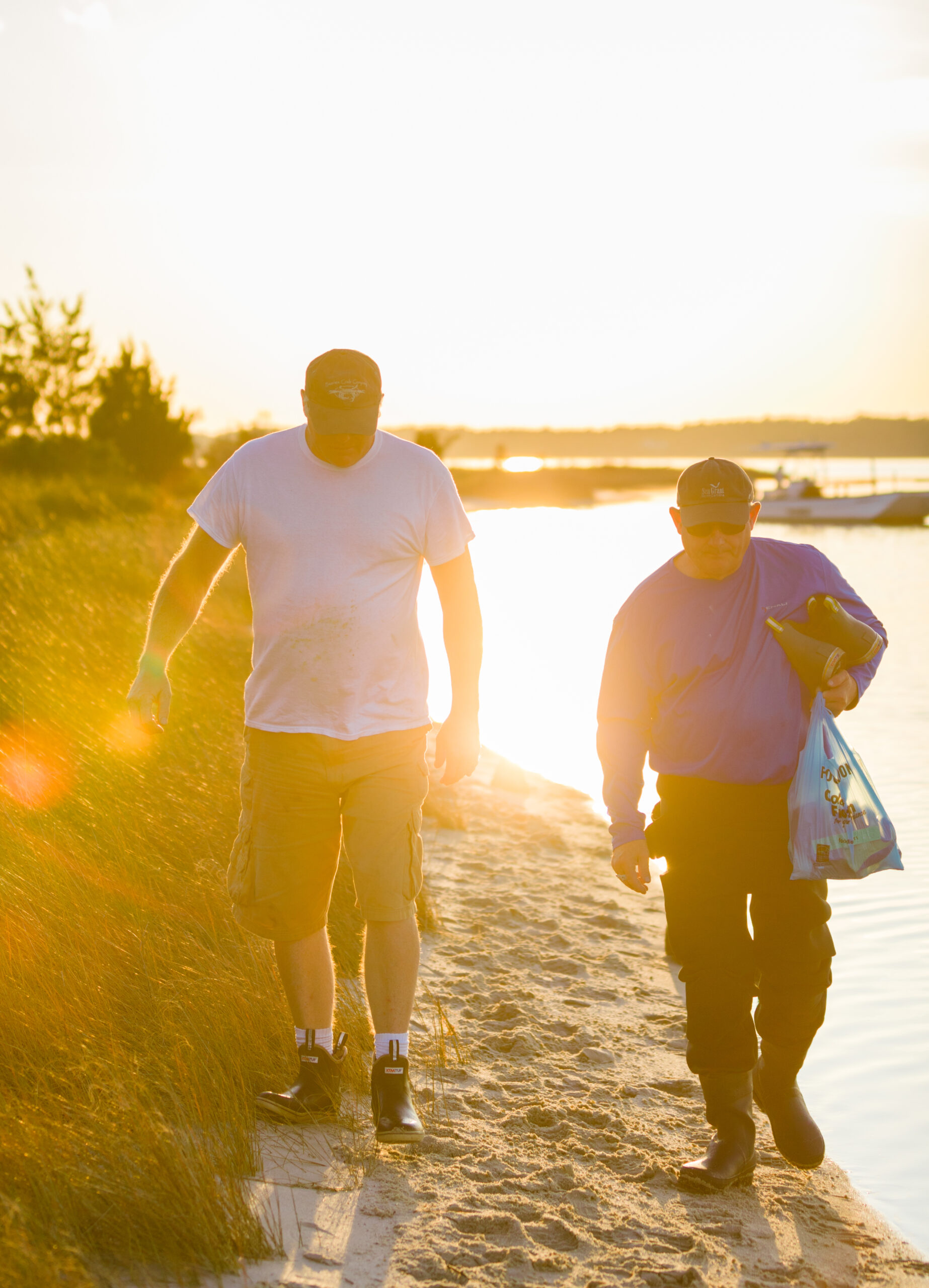 Jimmy Morris also has connections with hatcheries from Florida to Maine, providing not only stability in seed supply for N.C. growers, but also innovations and new technology. He also has been a key partner with coalitions to restore reefs, including producing more than 100 million oysters that were stocked in coastal oyster sanctuaries.

He had the first contract to provide “spat” larvae for the state, which were “set” on shell to continue growing in designated estuarine waters. Restored reefs improve ecosystems, with some larvae even riding currents out of the formal sanctuary boundaries and boosting wild growth.

Today, three generations of the Morris family work in the aquaculture business. In busy times, they employ up to 10 workers from rural Down East communities.

Their shellfish heads to restaurants throughout the region and state, including a special connection to Sea Level NC in Charlotte. Down East customers also know to check the coolers at Lookout Grocery. Over the years, online orders have come from as far away Florida and Texas.

As 2020 has brought new challenges throughout the state’s shellfish supply chain, Jimmy Morris has no plans to retire. “This body is made to move,” he says with a chuckle.

Information and resources about aquaculture