Above: The researchers at work in a North Carolina salt marsh. Photo: Joshua Himmelstein

BY ANTONIO B. RODRIGUEZ

Salt marshes are extensive along the estuaries and sounds of North Carolina, where they connect tall upland forests with shallow coastal waters. These important ecosystems provide refuge for fish, improve water quality, sequester carbon dioxide from the atmosphere, and help control shoreline erosion and flooding during storms.

Salt marsh area is declining globally and locally, largely due to human impacts, such as conversion of habitat into developments and navigation channels. However, new salt marsh is forming in some places where sea level rise has inundated upland forest. These locations have become intertidal, with salty soils, and are ideal for marsh colonization. 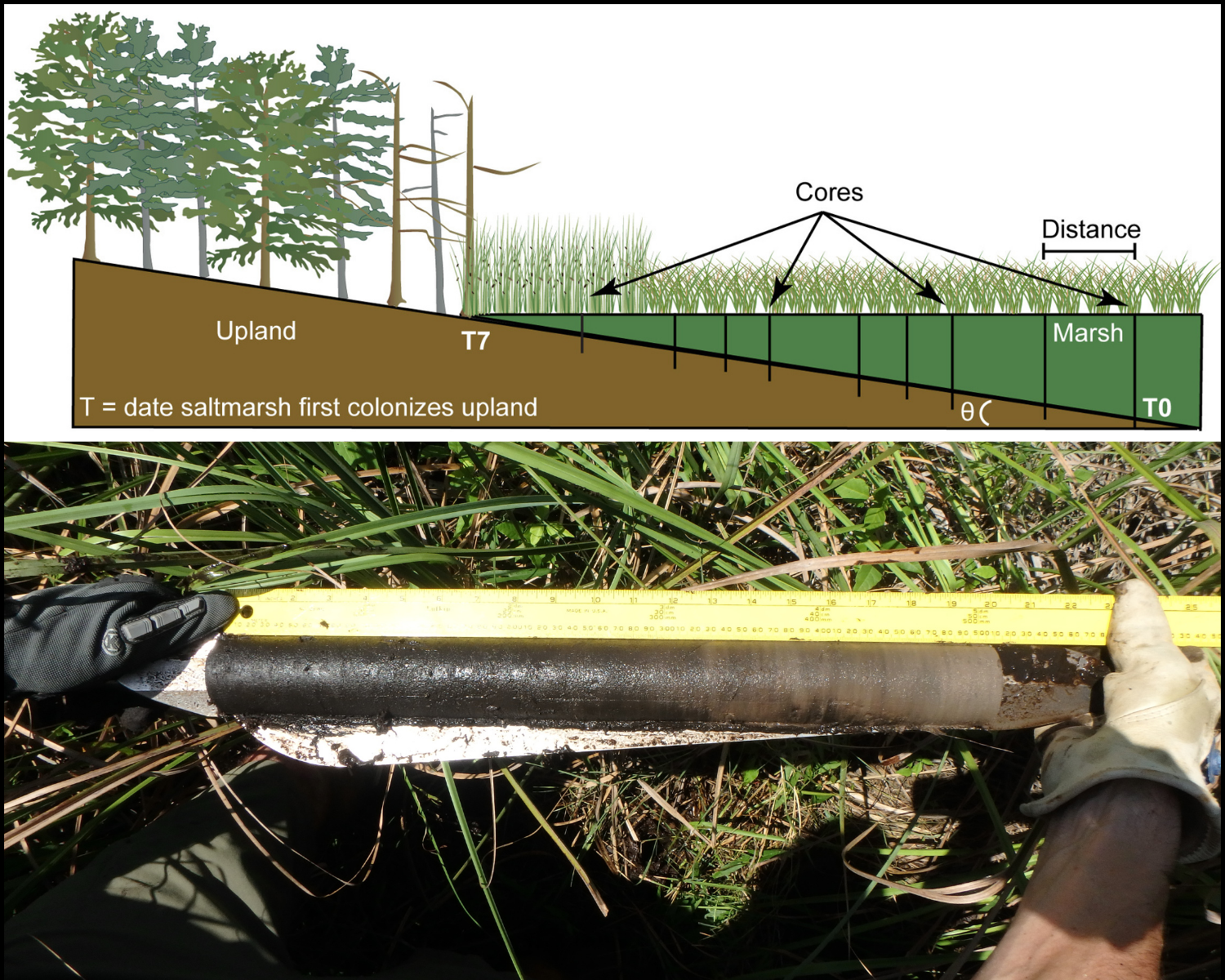 For our study, we wanted to know if major storms like hurricanes and nor’easters contribute to salt marsh transgression. Storms are commonly associated with elevated water levels (albeit temporarily), and they deliver salt to upland soils. They also can cause inlets to form through barrier islands, thereby increasing the connection between ocean and estuary, resulting in higher tides over the marsh.

We decided to look back in time to see how past storms have affected salt marsh movement along coastal North Carolina. As part of her master’s thesis project at the University of North Carolina at Chapel Hill’s Institute of Marine Sciences, graduate student Carson Miller measured rates of salt marsh transgression during a stormy period from about 1400 to 1675 C.E.

During that 275-year stretch, the number of inlets through the Outer Banks was greater than it is today, stemming from an increase in nor’easter activity and associated beach erosion, surge, and overwash, according to research published by colleagues at East Carolina University. Greater storminess during that time period wasn’t restricted to North Carolina — it characterized the entire western North Atlantic.

We had positioned the cores in a line from the marsh’s estuary edge to the upland forest boundary. Each core contained layers of salt marsh peat that had accumulated over time atop layers of upland forest peat. As a rule of thumb, the closer a core’s location was to the forest, the less marsh peat there was in the sample, and the more recently the marsh had migrated to that area.

In a given core sample, we identified the transition between upland forest peat and marsh peat by the absence of organisms found in brackish water typical of salt marsh habitat. The layer of marsh peat appearing at that transition represented when marsh grass first appeared in the upland area. To figure out that time period, we aged blades of grass stuck in the marsh peat using a tool called carbon-14 dating. 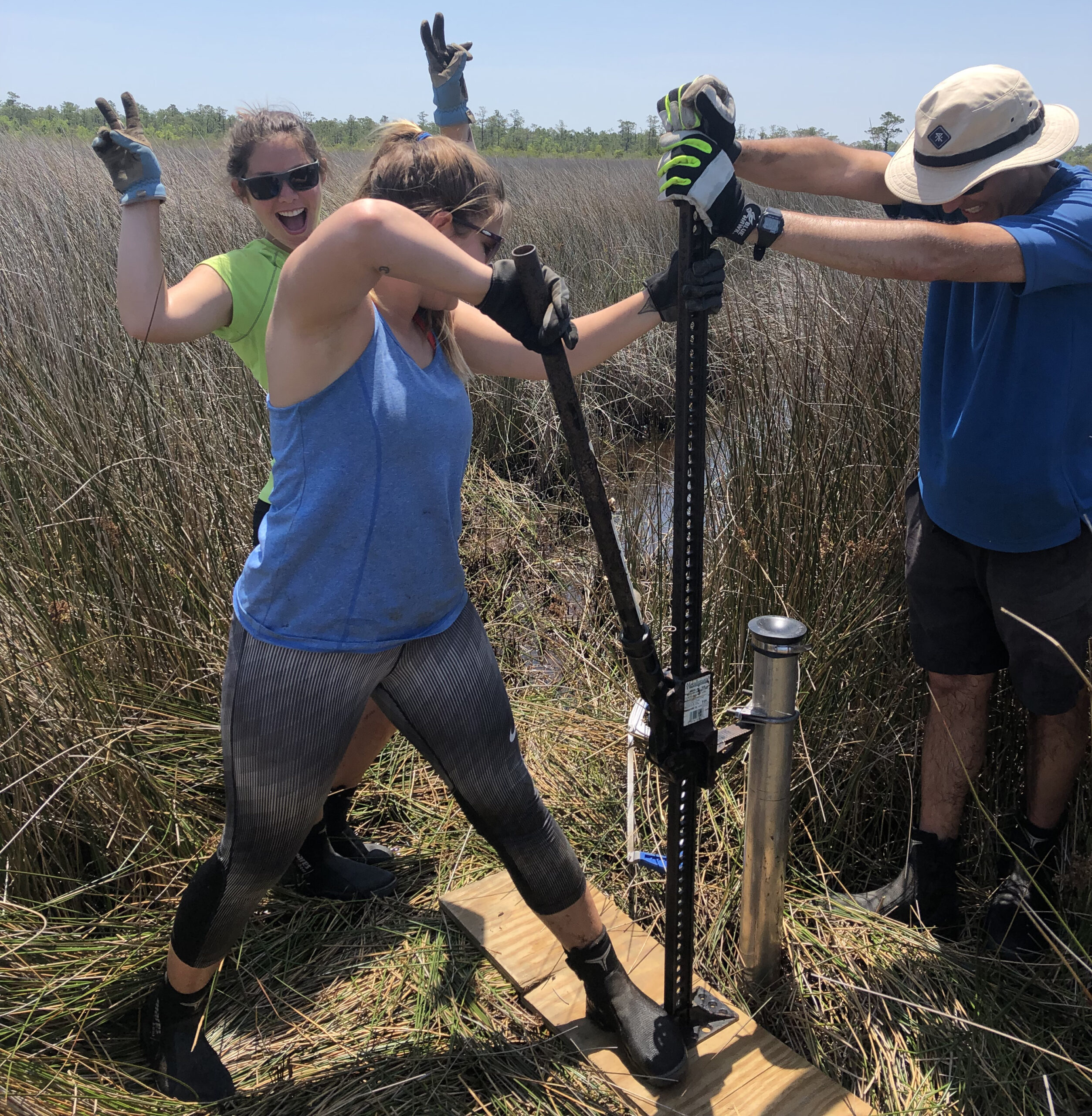 Carson Miller and Antonio Rodriguez pull a core out of the salt marsh with a ratchet jack. In the background, Molly Bost offers encouragement. Photo: Emily Eidam

Using the times that salt marsh first colonized upland areas and the distances between the cores, we could calculate rates of salt marsh transgression.

We found that salt marshes at two different sites migrated 2 and 10 times faster, on average, during the 1400-1675 stormy period than the non-stormy period that followed. Sea level rise was less than 1 millimeter a year during both timespans.

We also looked at transgression post-1865 — after the Industrial Revolution — when sea level rise had increased nearly three-fold, to 2.4 millimeters a year. Salt marsh transgression occurred on average 7 times faster than it did during the previous non-stormy period.

The study highlights that, in addition to contributions from sea level rise, changes in storminess also modulate salt marsh transgression rates. This finding is important because both storminess and the rate of sea level rise are projected to increase in the future. As development along the landward edge of salt marsh continues, will the area of this essential habitat be maintained or lost?

Antonio B. Rodriguez is a coastal geologist at the University of North Carolina at Chapel Hill’s Institute of Marine Sciences, within the Department of Earth, Marine, and Environmental Sciences. Here, he describes research into how big storm events influence the rate of salt marsh migration into upland areas. The work was recently published in Quaternary Science Reviews. The first author is Carson Miller, who was a master’s student in Rodriguez’s lab at the time. Miller is now a doctoral candidate at the University of Texas at Austin where she’s studying the geology of the Gulf of Mexico inner continental shelf. Grad student Molly Bost, a doctoral candidate at UNC studying oyster reefs, salt marshes, and tidal creeks, also contributed to the research. North Carolina Sea Grant provided research funding.