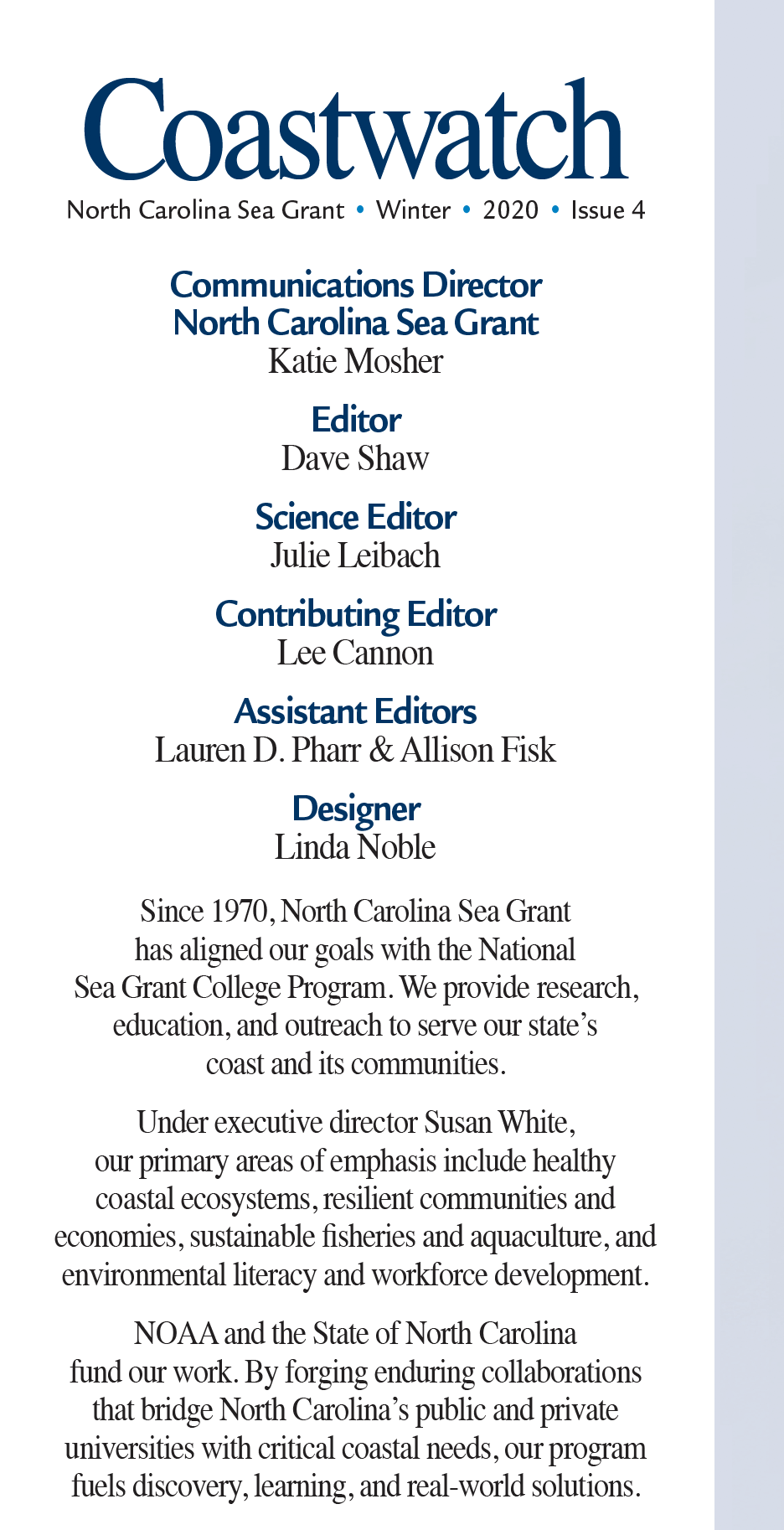 Lee Cannon joined the NC Water Resources Research Institute and NC Space Grant after a communications career in Washington, D.C., including time at the Embassy of Japan, the Smithsonian Institution, and arts and education nonprofits. Previously, she taught English in West Japan and researched public history in the city of Hiroshima for her master’s thesis. She holds a bachelor’s in English literature and writing from the University of North Carolina at Chapel Hill and a master of fine arts in creative writing from the University of North Carolina Wilmington.

Allison Fisk completed her B.S. in biology at East Carolina State University, where she also volunteered in a microbial ecology lab. After graduating, she worked as a lab technician in an environmental production lab. She currently studies in the M.S. in technical communication program at NC State and serves as a science communication intern at North Carolina Sea Grant.

Julie Leibach is a science writer/digital content specialist for North Carolina Sea Grant, where she writes and edits articles and social media posts about the wide-ranging research, education and outreach that the program supports. She formerly was the managing editor of online content at Science Friday, a science news site and popular public radio show. Before that, she was a senior editor at Audubon magazine, the National Audubon Society‘s flagship publication. Julie has a master’s degree in science journalism from New York University and bachelor’s degrees in biology and Spanish from Washington University in St. Louis.

A former reporter, newspaper editor, television assignment manager, and freelance writer, Katie Mosher brings a wealth of experience to the communications team at North Carolina Sea Grant. She also is now a science writer and editor for a range of outreach products. In addition to her responsibilities for the overall planning and direction of the communications department, she serves on the North Carolina Sea Grant management team. She also serves on the NOAA-U.S. Lifesaving Association Task Force on Rip Current Safety and is a former chair of the National Sea Grant Communications Network.

Linda J. Noble has worked as a graphic designer and illustrator for 40 years. She specializes in print and online publications including magazines, books, and annual reports. Her projects for local, state, national, and global clients involve work for institutional and educational organizations as well as businesses and nonprofits. She has designed Coastwatch magazine since 1987.

Lauren Pharr is a graduate research assistant at NC State University pursuing her master’s degree in fisheries, wildlife, and conservation biology. She is a wildlife biologist, ornithologist, and science communicator, and has written and contributed to articles for The Cincinnati Zoo, Wired Magazine, Discover Magazine, and BBC Wildlife.

For over a dozen years, Dave Shaw served as executive editor of Southern Cultures, the UNC Center for the Study of the American South’s award-winning quarterly, and for five years as editor of Early Developments, the flagship publication from UNC’s Frank Porter Graham Child Development Institute. His first book won the Katherine Anne Porter Prize in Short Fiction, and his writing has appeared in magazines and anthologies in the U.S. and abroad, as well as on many education and science news sites. He also serves on North Carolina Sea Grant’s team for Diversity, Equity, and Inclusion.