Do anglers fish in areas closed to fishing?

Despite patrolling and education efforts, research shows that illegal fishing still occurs — and at predictable times.

For fish populations in trouble, fishery managers sometimes limit or completely disallow fishing in certain areas if they contain critical habitats that support the populations under recovery. In some cases, no fishing is allowed within an area. For example, there are eight marine protected areas between Cape Hatteras and the Florida Keys established to protect several species of the deep-water snapper-grouper complex. The effectiveness of these off-limit fishing areas ultimately depends on enforcement (catching violators and deterring others) and compliance (persuading people to follow the rules).

The assumption is that the overwhelming majority of resource users follow the rules. But the ocean is vast, and monitoring large swaths of it requires intensive labor and resources that many agencies do not possess.

However, if it were possible to predict illegal fishing patterns in managed areas, this might lead to more efficient enforcement and conservation efforts.

Scientists in Australia used shore-based surveillance cameras and a predictive model they created to examine illegal fishing activity at two areas designed to protect threatened black cod and endangered grey nurse sharks. Researchers looked at footage sampled in 30-minute increments collected over the course of more than a year across sites to determine whether boats observed were illegally fishing or not, as well as to document weather conditions (like wind, rain, and wave intensity) and time of day.

Video footage revealed that illegal fishing occurred regularly within the two areas under observation, with higher activity occurring at the site closer to the boat ramp. A total of 185 boats illegally fished during the study, primarily by hook and line.

Illegal fishing happened most often on non-working days, like weekends or holidays, and on fair weather days — those with light winds and calm seas. Unsurprisingly, these days also were consistent with high recreational activity on the water.

Video cameras and modeling can improve the efficiency of fisheries monitoring by providing managers key insights into the behavior of fishers venturing into managed areas. With better enforcement, species in marine protected areas will have a better chance to thrive.

In the South Atlantic region, most of the managed areas are far offshore, outside the reach of shore-based cameras. However, the predictive model results linking fishing activity to weather, day of week, and time of day are more universal and applicable to areas beyond Australia.

It never hurts to confirm that most rule followers and law breakers appear to dislike fishing offshore in bad weather. 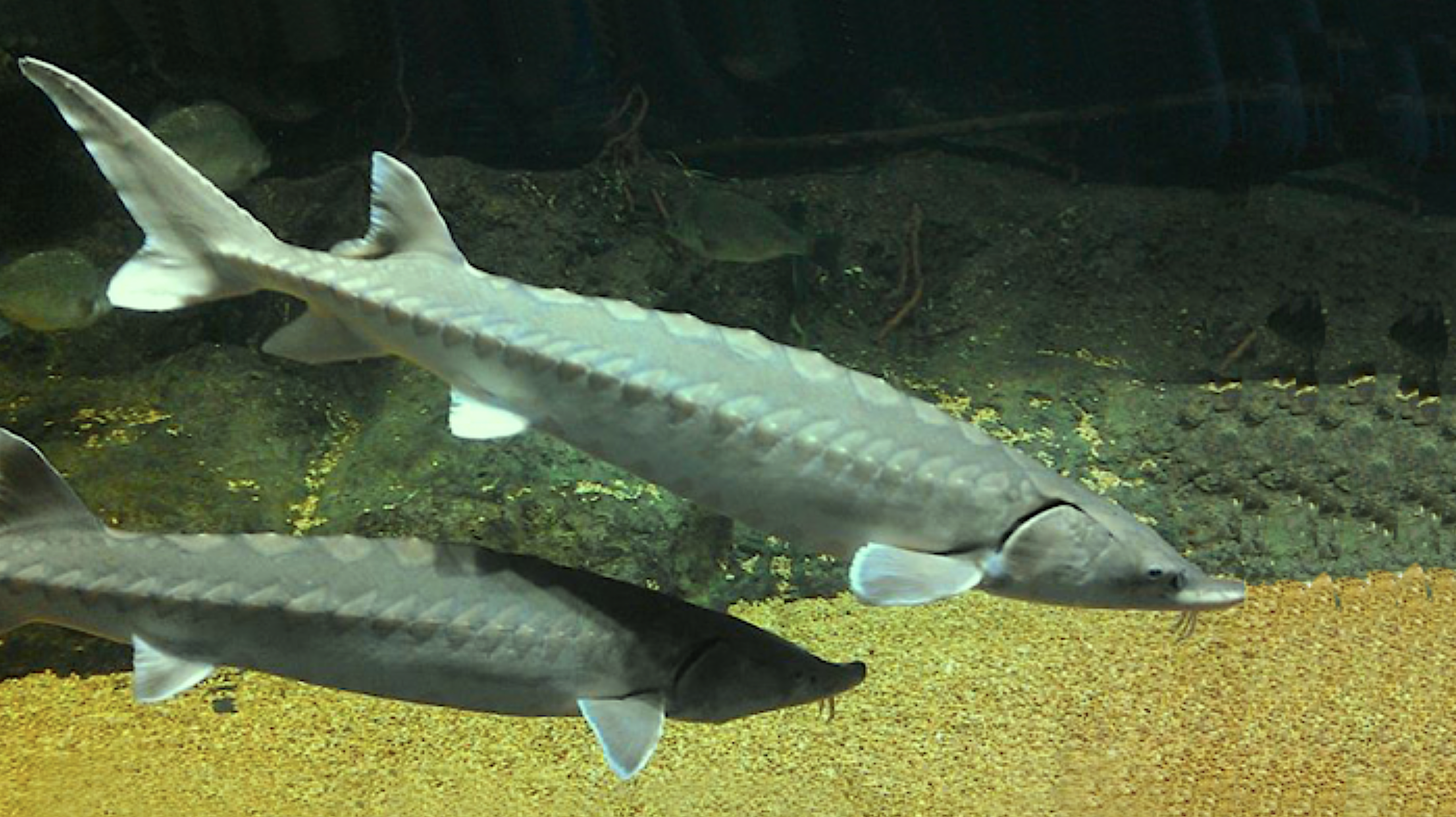 Can we use off-the shelf sonar to count Atlantic sturgeon?

Low-cost technology could allow for region-wide comparisons of daily numbers of the species.

Atlantic sturgeon are endangered fish inhabiting rivers, estuaries, and marine environments along the Atlantic coast of North America, including the waters of North Carolina. Hatched in freshwater, these fish spend most of their adult lives in the ocean and then return to freshwater systems to spawn and lay eggs. Once present in large numbers, these animals are now off-limits to fishing and share the same waters and environments where popular fish species thrive.

To better understand their changing population levels, scientists need to count spawning Atlantic sturgeon and their offspring. Tag and recapture methods — using either simple streamer tags or more sophisticated electronic tags — have been the go-to methods to follow the fish, but these techniques are resource-intensive and can harm the fish if conducted incorrectly.

It would be nice to have a method to passively observe and count these animals on a regular basis. And what if you could do this without getting out of the boat? Better yet, what if you could walk into Bass Pro Shops and purchase an off-the-shelf side-scan sonar unit that can “see” individual Atlantic sturgeon under the boat?

Scientists equipped a boat with a Humminbird side-scan sonar and surveyed nine sections of Atlantic sturgeon spawning grounds on the uppermost portion of the Savannah River in Georgia. On each of 50 occasions from August to November 2017, researchers laid down a strip of imagery that they could analyze in the lab.

The team focused on counting objects in the imagery that looked like Atlantic sturgeon (based on shape, dorsal fin and tail structure, shadow, and other factors) that were roughly 4 feet long, the minimum size capable of spawning. Computer modeling then used the fish counts to estimate the total number of spawning Atlantic sturgeon in the study area

The team observed at least one Atlantic sturgeon on each of the 50 sampling runs and estimated maximum daily numbers of spawners at 35 to 55 fish.

The flow rate of the Savannah River had an impact on Atlantic sturgeon detections. Specifically, as the flow rate increased, the chance of detecting fish decreased. Although scanning while moving upstream or downstream didn’t affect the count, downstream imagery was clearer and made for easier fish counts.

The study provides evidence that off-theshelf side-scan sonar is capable of monitoring daily abundance of spawning Atlantic sturgeon in shallow river systems. The authors encourage others monitoring sturgeon to further experiment with this low-cost technology, which could allow for region-wide comparisons of the daily abundance of Atlantic sturgeon. 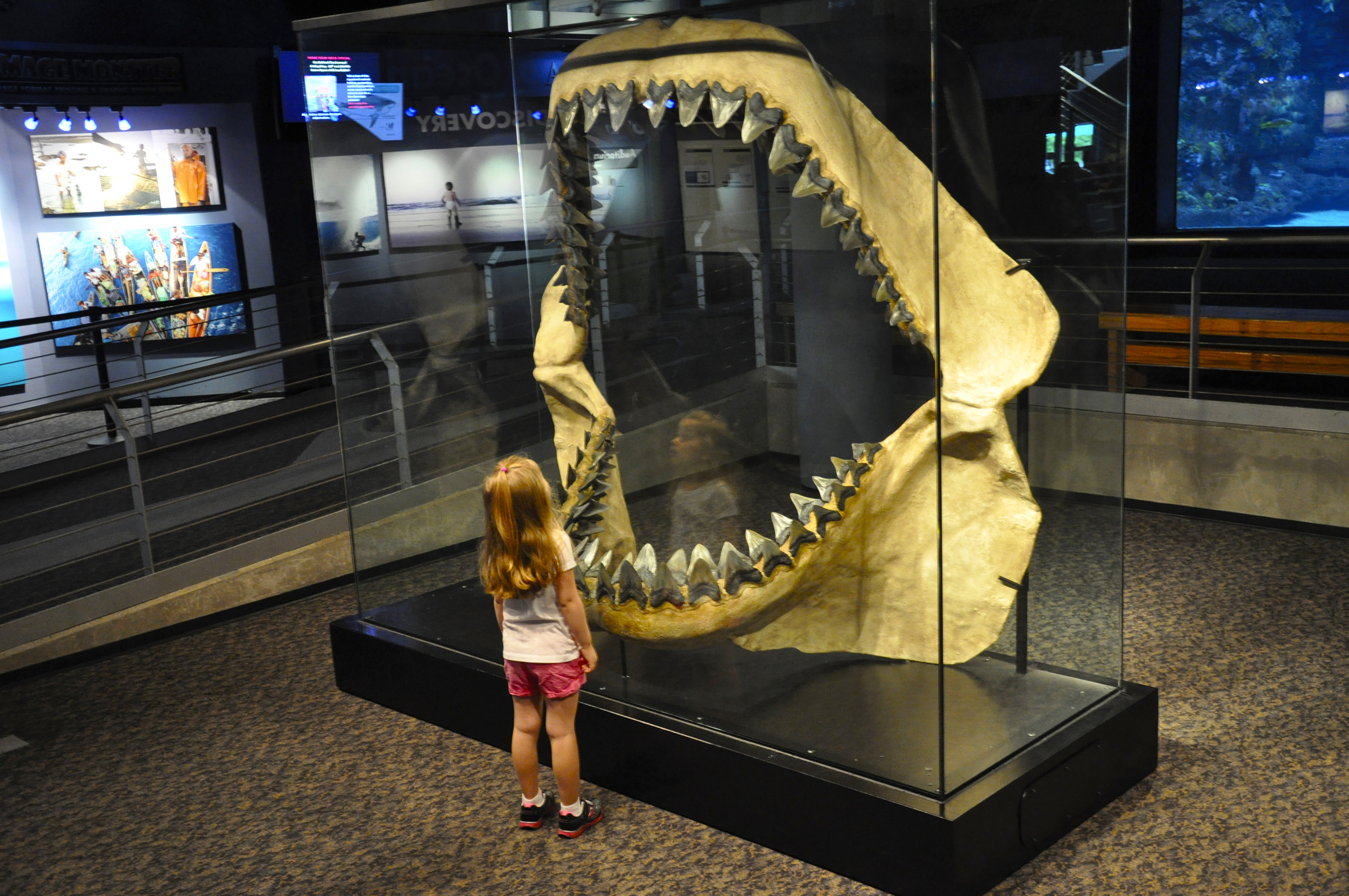 How big was the megalodon shark?

New research suggests the extinct species could have been nearly 60 feet long.

The megalodon shark once lived worldwide in tropical-temperate regions. Historically, the megalodon is estimated to be the world’s largest predator shark ever to have existed.

With the fossil record incomplete, it can make the estimations of large extinct taxa like the megalodon very hard to predict. In order to estimate sizes of extinct species, paleontologists must rely on the linear relationships of living relatives, such as the great white shark and others.

However, these relationships remain questionable due to the vast difference in size between species. Can the traits of other sharks from different lineages help scientists determine the size of a megalodon? Can the body dimensions of the great white shark, as well as other large predatory sharks alive today, inform the size of the head, dorsal fin, and tail height of the extinct predatory megalodon?

The measurements taken confirm that the maximum size of a megalodon was about 50 to 60 feet. For reference, that’s somewhere between the length of a tractor trailer (48 feet) and a bowling lane (63 feet).

A 52-foot megalodon shark likely would have had a head about 15 feet long, a dorsal fin about 5 feet tall, and a tail about 12 feet high.

The largest estimated size of the megalodon is more than twice the size of the largest living shark in the Lamniformes family, which includes the great white.

So what? This analysis marks the first quantitative method used to determine the estimated size and shape of megalodon body parts. For example, the measurements of the dorsal and caudal fins suggest that these were used for swift predatory locomotion and periods of long swimming.

Are fewer people getting saltwater fishing licenses during the COVID-19 pandemic?

Year-to-date totals are typical, yet the changes in sales by type of license are anything but.

My friends, family, and colleagues who live up and down the North Carolina coast have all commented in some way or another about the throngs of people on the coast this past spring, summer, and fall. This should not be surprising, considering that people abandoned most far-flung summer travel plans in 2020 because of the global COVID-19 pandemic. People are simply spending their leisure time closer to home.

In theory, that could mean more beachgoers and perhaps more fishers. If you are an angler, maybe you witnessed more people than typical on the water in 2020.

But why should we care what happens with the Coastal Recreational Fishing License (CRFL)? Well, CRFL sales improve the ability of our state natural resource agencies to manage our fisheries, and some of the fees go towards projects and new initiatives to support fishing. Fewer CRFL sales translate into less revenue.

To determine if anglers fished more often than usual, we can look at license sales, as the North Carolina Wildlife Resources Commission (NCWRC) tabulates them monthly. The NCWRC is the agency responsible for the administration of all freshwater and saltwater fishing licenses in the state.

What information is available?

I looked at publicly available data from NCWRC, examining the 10 categories of annual and 10-day fishing licenses that involved a saltwater component (CRFL). I excluded all types of lifetime CRFL licenses, because the factors impacting these purchases are more nuanced.

For each license category, I computed the sales for the period January 1 to August 31 for 2017, 2018, and 2019 and compared that to the same period for 2020. This revealed whether the 2020 sales data was lower or higher than the previous 3-year average, and if so, in which categories. 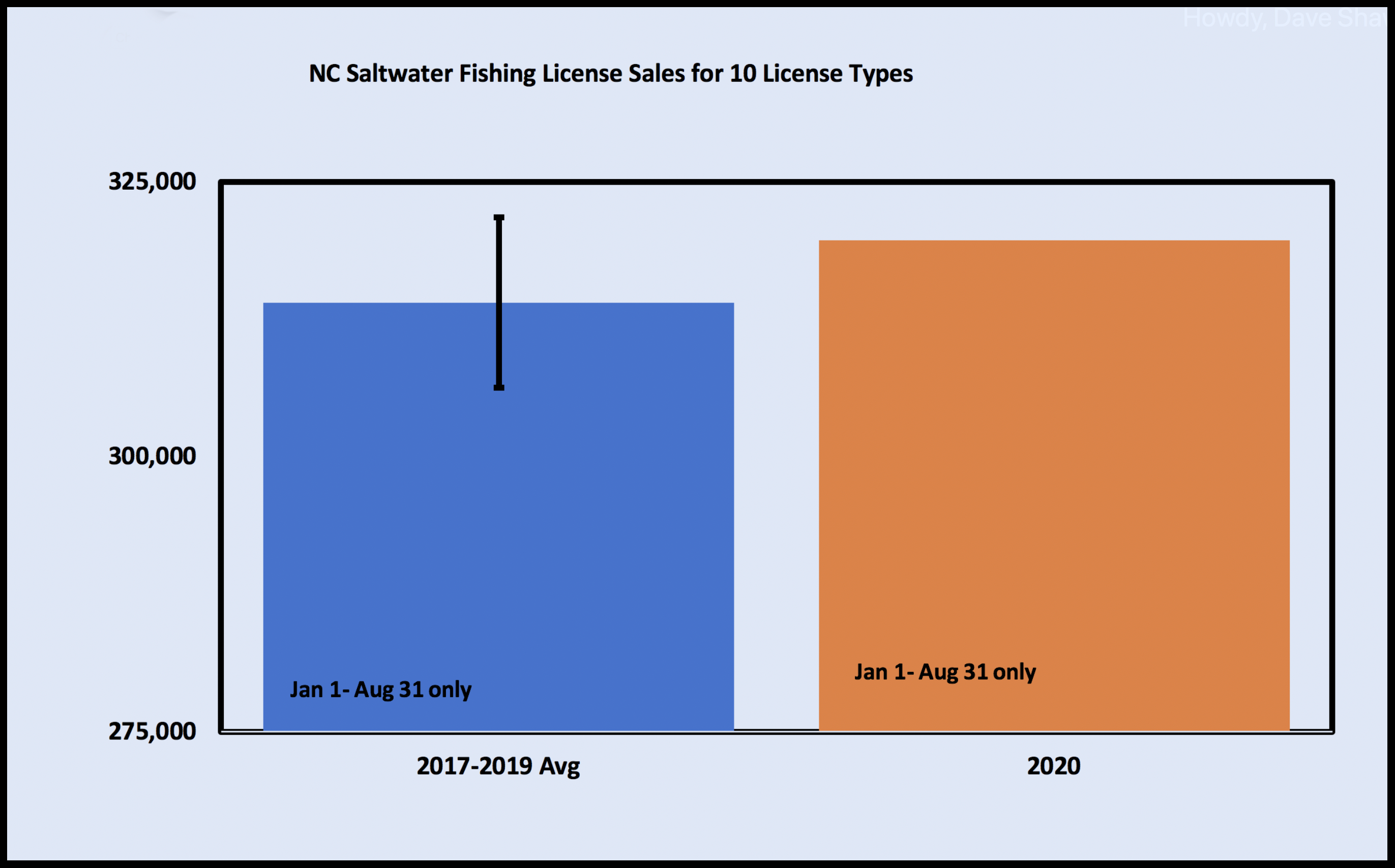 What do the numbers tell us?

From January through August of 2020, people purchased 319,661 CRFL, which is a 2% increase compared to the 2017-2019 average (314,024) during the same months. There is typically some fluctuation in sales from year to year, and the chart above shows that the 2020 totals are within the range of the previous threeyear average.

But since we can all agree that 2020 was not a typical year, I wanted to dive a little deeper (below) to look at the changes in sales by license type to see if some licenses performed better than others.

Immediately, we see some departures from normal numbers, which COVID-19 may have caused, at least in part.

First, sales of non-resident 10-day licenses (the largest CRFL category by number) were down 8%, which is likely reflective of the reduced travel during the pandemic. Out-of-state anglers come from far and wide to cast a line in N.C. 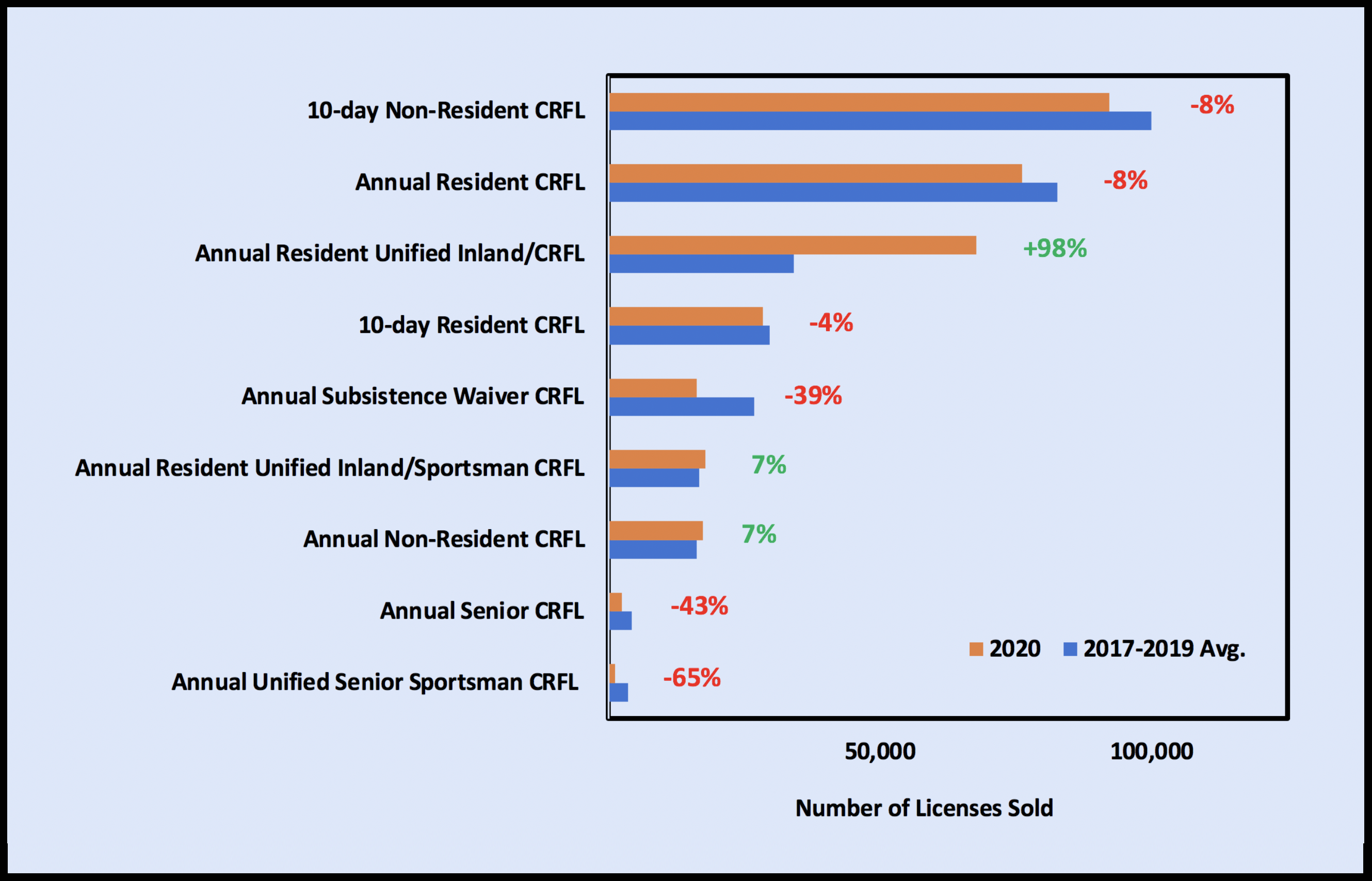 We also know that COVID-19 adversely impacted seniors in 2020, and it seems logical that COVID-19 also may be limiting seniors’ ability to get out and fish. Of all CRFL types, sales of the Annual Senior CRFL (-43%) and Annual Unified Senior Sportsman CRFL (-65%) declined the most. Incidentally, these two CRFLs had the lowest sales volumes of any licenses that allow saltwater fishing.

Last, and perhaps most importantly, the number of Annual Subsistence Waiver CRFLs declined greatly (-39%). The Department of Social Services issues this license upon request to any individual who receives benefits from Medicaid, Food Stamps, or Work First Family Assistance. If COVID-19 was partly responsible for this decline, then it could be due to less demand overall (fewer people wanting or able to fish) or due to decreased access to the waiver-granting agency during the pandemic. Either way, this decline is troubling.

What about actual fishing effort?

It’s too early to tell whether CRFL sales reflect actual observed changes in fishing effort and catch. Those estimates are gathered in waves of data collection throughout the year and take months to process and interpret. The North Carolina Division of Marine Fisheries will be able to tell if fishing effort actually increased or decreased in 2020 compared to previous years sometime by the spring or summer of this year.

According to staff at the NCWRC, pleasure boat registrations were on pace to achieve the highest annual total in 5 years. I know that I saw a lot of boats on the water near me in 2020.

For the full studies and more:
HookLineScience.com