North Carolina Sea Grant led research last year that evaluated the impacts of commercial fisheries on local economies and on the state overall. Our team conducted an economic impact analysis and consumer demand survey to inform our results. Here’s what we found.

North Carolina’s wild-caught commercial seafood industry provides nearly $300 million in economic impact and 5,500 jobs in the state. From harvesting along the coast, seafood preparation and wholesaling, and the retail and restaurant sectors, the seafood industry makes a significant economic splash. 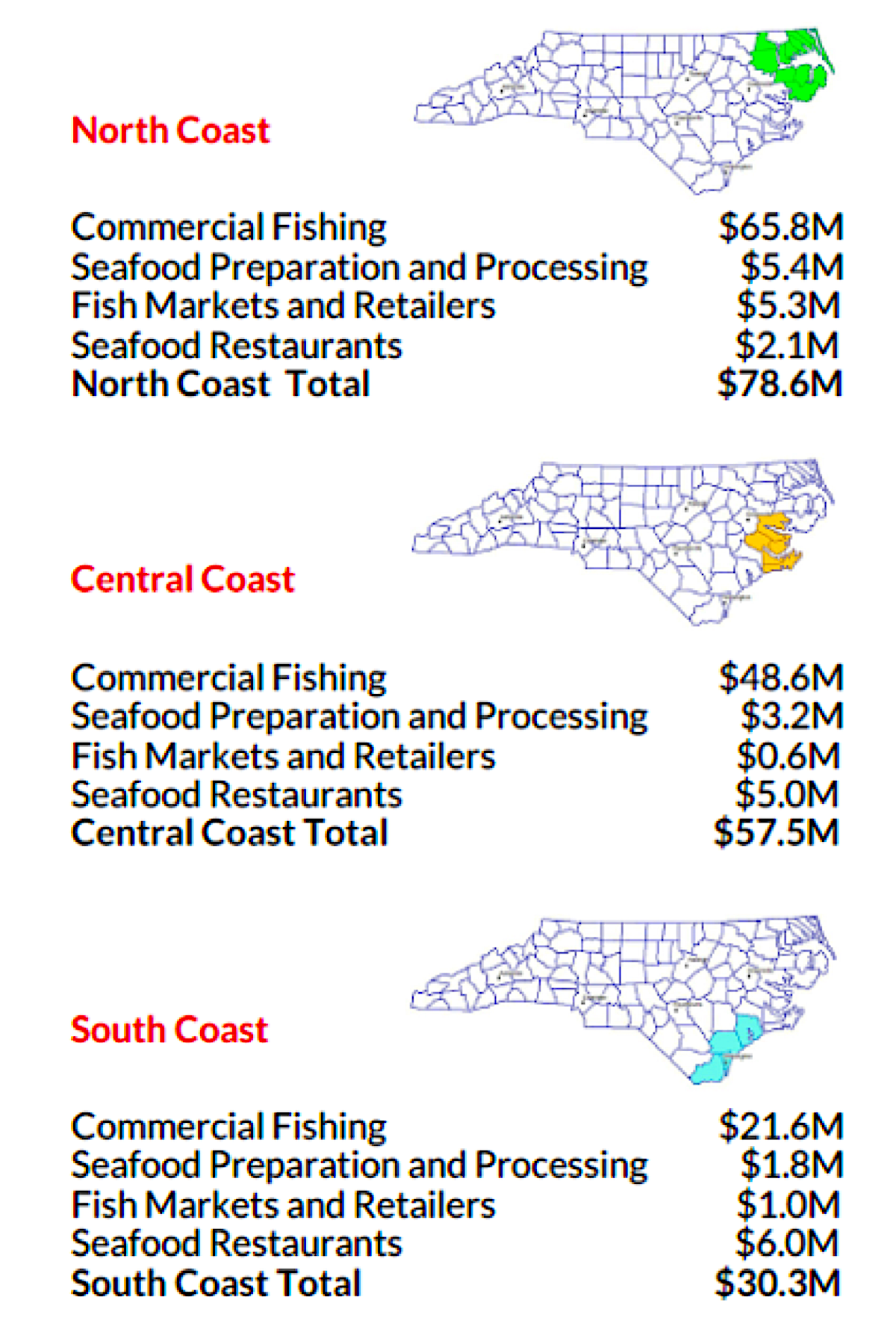 The N.C. seafood industry’s largest economic impact by geographic area is away from the coast, largely due to inland fish markets and restaurants. The north coast of the state has the next biggest impact, followed by the central coast and southern coast. Credit: Eric Edwards.

“Total economic impact includes direct, indirect, and induced impacts,” says Eric Edwards, the NC State University economist who led the economic impact analysis. “Direct impacts are the dollars first earned by a fisherman. Indirect impacts are the money from those seafood earnings spent by the fisherman, for example, at their local boat repair manufacturer. Induced impacts are the boat repair guy’s wages that further circulate into the state’s economy, perhaps at the grocery store or spent on monthly rent payments.”

As part of our research, we conducted a survey of 1,600 North Carolina residents to determine both their current consumption of seafood and the potential demand for North Carolina seafood.

Survey respondents had a positive perception of N.C. and U.S. seafood, with confidence in seafood safety protocols and in fishers following rules that conserve fishery resources. Respondents also believe their purchases should support the livelihoods of fishers.

State residents reported preferences for seafood like shrimp and flounder from North Carolina and from U.S. sources over foreign products — which may result in a price premium in certain markets. In fact, seafood origin had a stronger influence on consumers’ willingness to pay for seafood than “wild-caught” or “sustainably-caught” labels, although these attributes also mattered to respondents, especially as these attributes accumulated.

Price is still a prime factor affecting purchasing decisions, thus sellers of domestic seafood should cultivate a promotion strategy that tells customers why their product is worth buying. The commercial industry has opportunities to increase its market share through targeted marketing, home-preparation guidance, and prepared-seafood meals.

Since 1995, the North Carolina Department of Agriculture & Consumer Services has supported the Got to be NC Seafood program, which raises consumer awareness of the businesses that produce and sell wild-caught and cultured marine and freshwater species. Between 2005 and 2012, five local-seafood educational initiatives along the coast also began helping to raise public awareness of North Carolina seafood and commercial fishing: Brunswick Catch, Carteret Catch, North Carolina Catch, Ocracoke Fresh, and Outer Banks Catch.

In 2019, Always NC Fresh was launched with funding provided by the North Carolina Commercial Fishing Resource Fund. In 2020, North Carolina Sea Grant and partners established the NC Oyster Trail, which promotes a variety of seafood businesses that sell oysters and other products, as well as fostering ecotourism through visits to shellfish farms.

While all of these efforts have helped to generate consumers and strengthen the sea-to-table chain, according to North Carolina Sea Grant seafood marketing specialist Barry Nash, “A deficit of recurring funds and paid, professional staff among all of the coastal-seafood brands has made long-term seafood marketing challenging.” 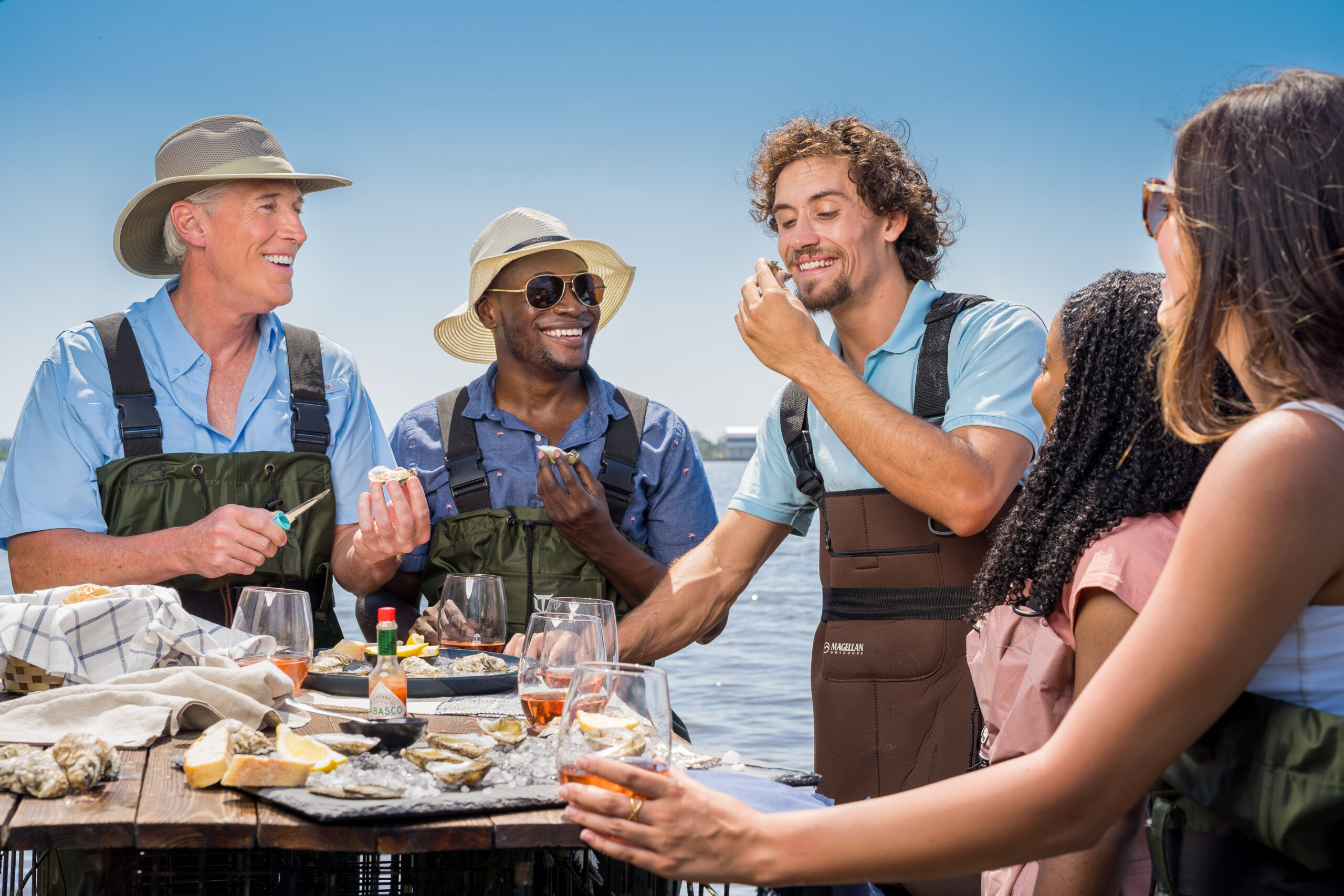 The NC Oyster Trail promotes a variety of seafood businesses that sell oysters and other products, as well as fostering ecotourism through visits to shellfish farms. Credit: Justin Kase Conder/NC Oyster Trail.

#4. A NIMBLE SEAFOOD INDUSTRY CAN CAPITALIZE ON EVERY FISH.

With significant consumer demand for N.C. seafood, supply is not always available. Additional processing, cold-storage aggregation facilities, and centralized distribution centers are infrastructure investment opportunities that could add significant value to the industry. As is, the commercial seafood industry suffers from fragmented and underdeveloped supply chains moving west from the coast to markets further inland. (Visit go.ncsu.edu/Seafood-Supply-Chain to learn more.)

Regulatory limits on fisheries also reduce supply, which requires a nimble seafood industry to capitalize on every fish sold. Value-added seafood meals, product enhancements, and home preparation guidance are opportunities to earn more revenue. When cooking seafood at home, 72% of survey respondents were interested in recipes, 48% in blended seasonings, 36% in seasoned breading, 30% in pre-made marinades, 27% in pre-portioned and marinated raw fillets, and 17% in seafood stocks.

The convenience of purchasing and preparing food is important to consumers across all demographics. North Carolina Sea Grant’s popular print and online seafood guide, Mariner’s Menu, includes a free web archive of recipes and home-preparation tips. These recipes all use commercial fish species native to our state. Visit MarinersMenu.org.

Read the full reports from our study of North Carolina’s seafood industry.

Coastwatch on “New Links in the Sea-to-Table Chain”