Some experienced offshore bottom fishers can read a depth finder display like a good book and identify individual fish species from shapes that most others would refer to as “something big down there.” Unfortunately, fishers never really know what is down there until they see it on video or catch it themselves.

But are times changing?

The waters off the coast of North Carolina are home to many shipwrecks that have accumulated over the past several hundred years. These structures hold cultural and historical significance, as well as important habitat for marine life. Shipwrecks are often the destination for offshore fishers and divers, because these structures can serve as fish havens.

A team of NOAA archaeologists captured on video and with detailed laser-generated imagery the remains of two World War II shipwrecks sunk during the Battle of the Atlantic in 1942. The ships, a German U-boat, U-576 (above), and a Nicaraguan freighter, SS Bluefields, are located relatively close together about 30 miles offshore in 660 feet of water — deeper than the range of most fishers and divers.

When ecologists learned about the availability of the video and imagery, they were interested in using the data to see which kinds of fish frequent these remote, deep-water shipwrecks and where exactly on the wrecks these fish seem to congregate. 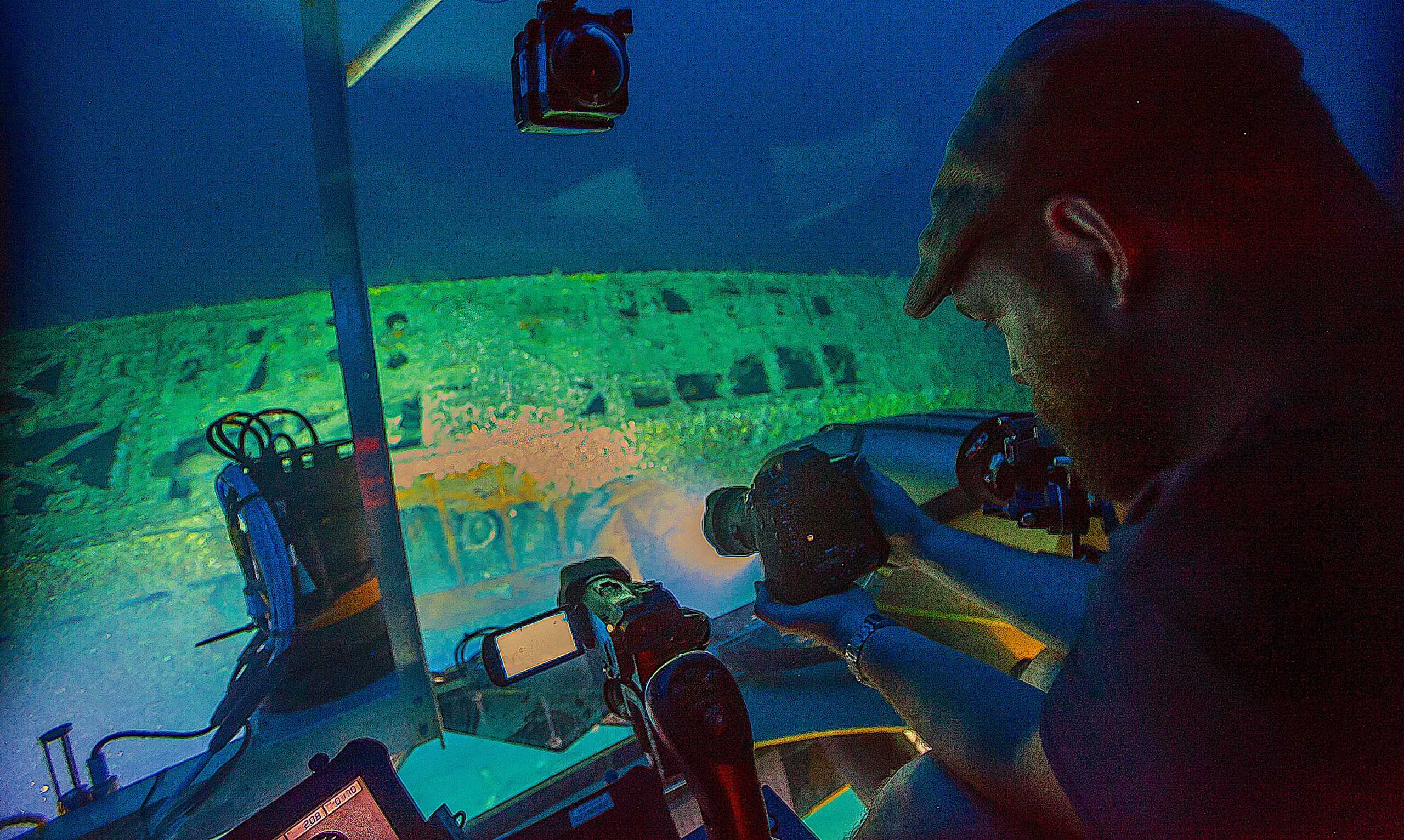 Joe Hoyt, maritime archaeologist with the NOAA Office of National Marine Sanctuaries, takes photos of the shipwreck from the submersible. Credit: Robert Carmichael/NOAA’s Battle of the Atlantic Expedition.

The submersibles made several passes alongside each shipwreck to collect video and create 3-D profile images. From the ecological data collected, the scientists were able to count and identify the fish and their locations relative to each shipwreck.

The shipwrecks hosted several fish species that live close to the ocean floor, including snowy grouper and yellow-edge grouper, among others. Other notable species included wreckfish, Conger eel, and Darwin’s slimehead.

On both shipwrecks, fish concentrated around high-relief shipwreck features. For example, on the U-boat, this included the conning tower, the deck gun, and the bow. A similar pattern of fish behavior has been reported around rocky hard-bottom reefs.

While the research team did not have access to water current data, fish location data suggests that fish are congregating on what appeared to be the upstream side of
each shipwreck. Previous work on shallower shipwrecks on the U.S. continental shelf indicates that this pattern may be common.

The authors note that the study site is the only naval battlefield of World War II on the U.S. East Coast where both the target (the SS Bluefields) and the aggressor (U-576) sank in the same vicinity.

The success of the joint archaeological-ecological mission has opened the door to additional collaborative ventures, which unmanned underwater vehicles potentially could carry out.

— Summary by Scott Baker, adapted in part from an original article by Heidi Swanson 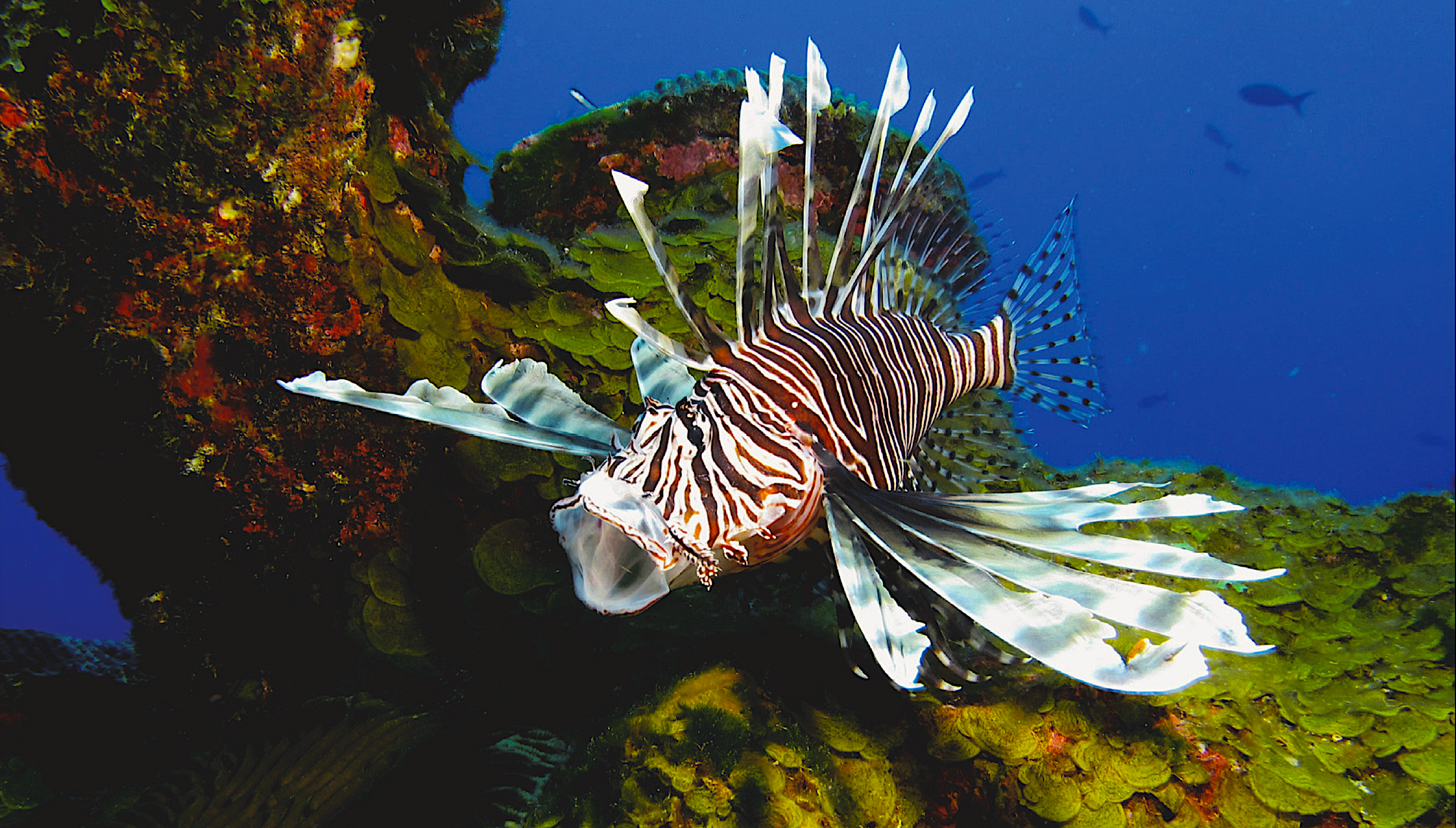 Scientists found evidence of lionfish much farther inland than they expected. Credit: NOAA.

Is it Possible to Detect Lionfish by Analyzing Environmental DNA?

Lionfish are highly invasive species that are resistant to many forms of population management. While they are known to have established populations in South Atlantic and Gulf of Mexico ecosystems, the fish’s pervasiveness was unknown for shallow, inshore, riverine, and estuarine locations along the Gulf.

Environmental DNA — also known as eDNA — is DNA that an organism sheds into the environment. Analysis of eDNA from water and other environmental sources is a relatively new method to determine the presence and prevalence of invasive species. Prior to this research, though, environmental DNA had not been yet used to detect lionfish invasions, which have become a persistent problem in the Southeast.

What if scientists could sample water to determine whether lionfish are present without actually seeing the lionfish?

The team detected the highest numbers of lionfish in July, across locations. Occupancy modeling, a statistical analysis method used to determine the true presence of a species at a site, suggested that the environmental DNA is likely underrepresenting the true number of lionfish at these sites.

In addition, lionfish were present farther inland than previously assumed — with eDNA detected as far as 23 miles inland from the northern Gulf of Mexico. 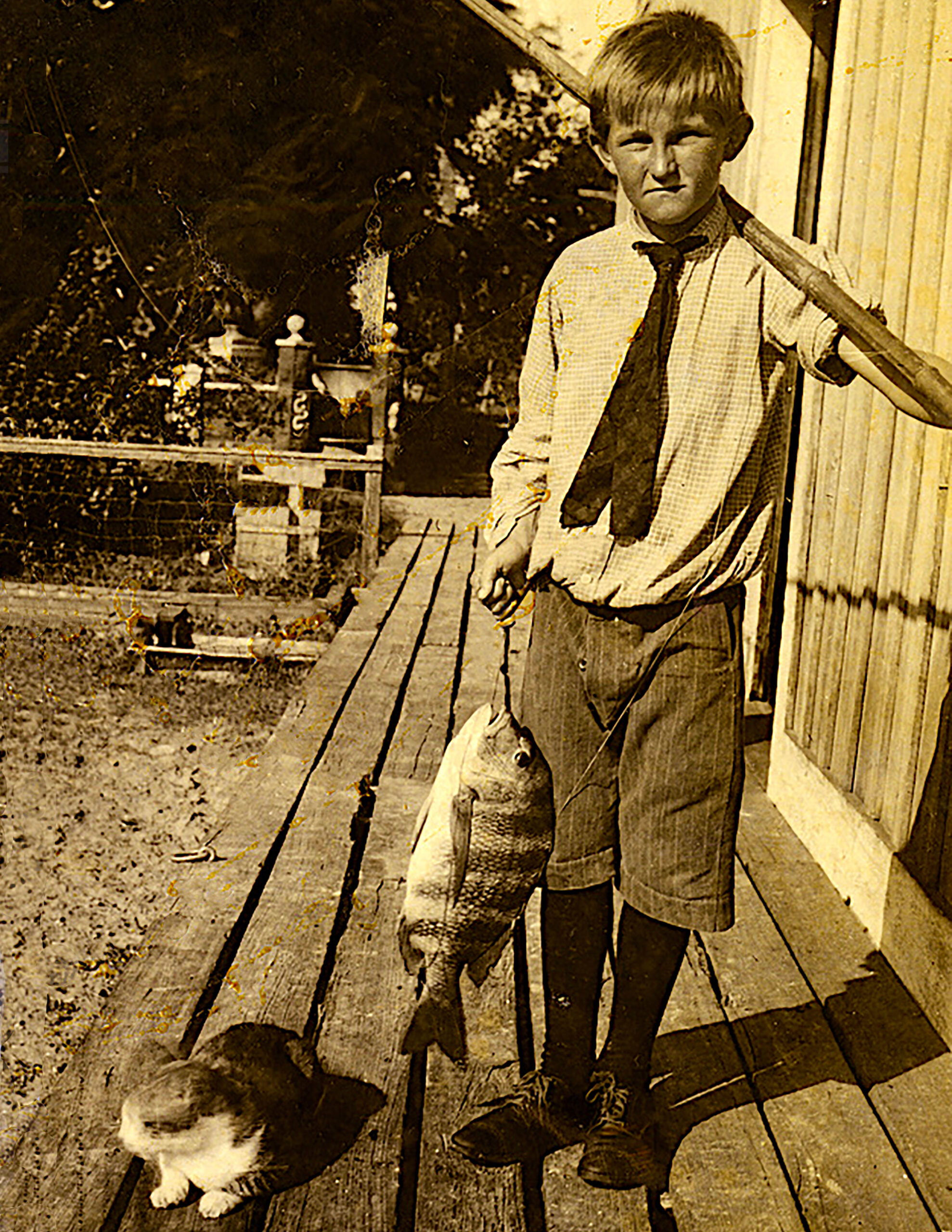 A Florida boy with a fresh sheepshead catch, ca. 1910. Credit: State Library and Archives of Florida.

Lionfish are an invasive species that indiscriminately feed on other fish in their environment and already have impacted offshore fish, including some popular snappers and groupers.

As this study shows, lionfish also exist in shallow, inshore, riverine, and estuarine locations along the Gulf of Mexico, which means they might also pose a threat to native estuarine fish and invertebrate species, such as shrimp and crabs.

What Can Scientists Learn from Ancient Sheepshead Bones?

Sheepshead bones recovered from historical sites reveal large-scale changes in population, as well as the forces driving these changes.

Fisheries managers are developing more nuanced management strategies that take into account the dynamic interactions among ecosystems and humans.

Sheepshead are a major component of both commercial and recreational fisheries along the southeastern U.S. coast and the Gulf of Mexico. In contrast to some popular species that have been exploited for a relatively short period of time, there is evidence that sheepshead in the Gulf of Mexico have been highly sought-after for hundreds of years.

We know this because scientists have found piles of sheepshead bones at historical sites along the Gulf of Mexico coast. Some of the largest historical sites, in fact, are in and around New Orleans.

By utilizing these old bones, scientists might be able to begin to understand how species like sheepshead respond to long-term changes in fisheries practices.

Scientists recovered sheepshead bones from five historical sites dating from 1720 to 1910 BCE and from one earlier site dating from 450 to 130 BCE. The study area encompassing these sites contains a wide range of habitats used by sheepshead.

The research team used bone size as a proxy for fish size and looked at chemical signatures — specifically carbon and nitrogen isotope ratios — in the bones to reconstruct prehistoric diet. As bones grow, their compositions reflect dietary intake and mobility.

Analyses of archaeological sheepshead specimens also produced a wide range of bone compositions that indicates sheepshead consumed in New Orleans were sourced from a broad range of brackish and marine habitats. This provides more support for the theory above.

The decreases found in average fish catch size are a well-documented response to overfishing and may have resulted from use of size-selective gear like gill netting, and from removing larger fish from the population. This, in turn, can promote genetic selection for fish that reach sexual maturity at a smaller size, which therefore can contribute to overall decreased fish sizes.