As sea levels rise, an epic battle takes shape on our coast, where incremental changes will have enormous impacts. A new project is coordinating invaluable measurements of marshland elevations to reveal the story as it unfolds. 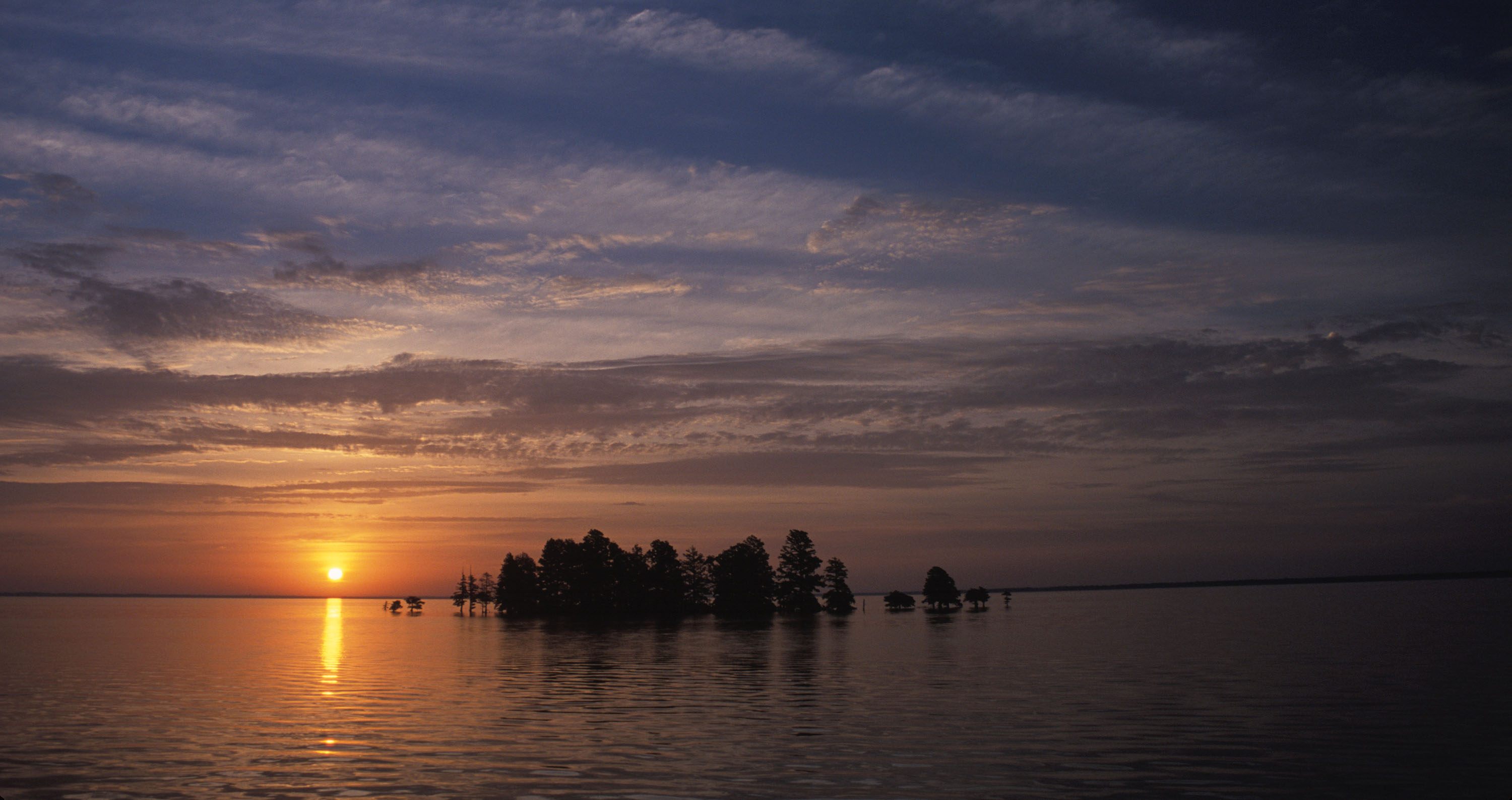 North Carolina Sea Grant’s Sarah Spiegler, coordinator for the North Carolina Sentinel Site Cooperative, is facilitating an innovative new group at work on part of the climate change equation that we don’t normally think about when we talk about sea level rise. By capitalizing on Surface Elevation Tables (SETs), the NC SET Community of Practice will create a more complete picture of the effects of climate change.

A few years ago, Galen Scott of NOAA’s National Geodetic Survey used a simple exercise to illustrate how to think about coastal changes due to sea level rise. He raised his hands next to each other, palms facing downward. His left hand signified the water level, and his right hand signified the marsh edge. He then started moving his left hand up slightly and his right hand down slightly. In essence, he said, “If the water levels are higher than the marsh, that’s when we’re in trouble.”

But he then moved his right hand slightly above his left, depicting what can happen when marshes gain elevation, building through sediment deposits and plant root production — potentially how marshes might “keep up with or outpace rising water levels.” He then started moving both his hands up and down next to each other, explaining that understanding dynamic changes in water levels and in marsh elevation is crucial for coastal managers when making decisions about how to manage coastal resources in the face of climate change. 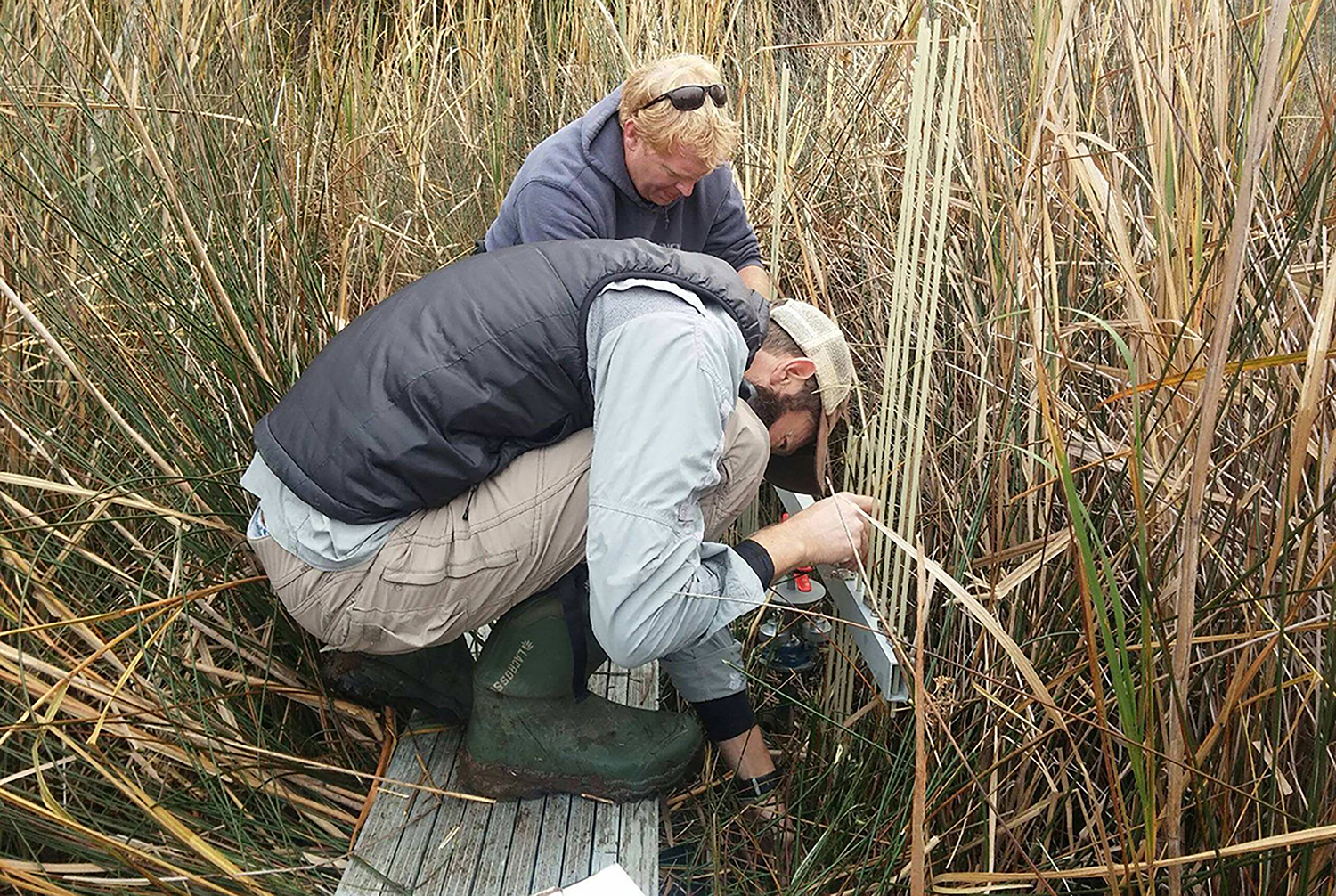 Scientists predict that climate change will impact coastal habitats and communities in the coming years, including an increase in average water levels along coasts worldwide. Sea levels are rising on the scale of millimeters annually, due both to the melting of glaciers and ice caps and the expansion of water as it warms. However, as millimeters add up over the coming years and decades, big changes and immense challenges will result for coastal ecosystems and communities.

Although sea level rise occurs on a global scale, the effects and rates are regional and local in nature. “Relative” rates of sea level rise can differ from the global rate due to local factors. These include upstream flood control, erosion and regional ocean currents — and even land movement, in continuation of a centuries-long response to the weight of Ice Age glaciers.

In Beaufort, North Carolina, the current relative sea level rise is 3.1 millimeters annually, based on data from 1953 to 2018 at a National Oceanic and Atmospheric Administration tide gauge. This yearly increase is a little more than the thickness of two pennies. In Wilmington, the sea level rises 2.39 mm per year, according to data from 1935 to 2018 at a NOAA tide gauge. On the Outer Banks, over 40 years of data from the Oregon Inlet NOAA tide gauge shows an annual increase of 4.69 mm.

But why worry about sea level rise that’s only two or three pennies thick?

The global rate of sea level rise is accelerating, and those pennies will add up even more quickly. In fact, the NOAA “low” global sea level rise scenario for Beaufort, for instance, predicts seas a full foot higher in the next 40 years. However, if rates continue to accelerate, NOAA forecasts say Beaufort could experience sea level rise of 2 to 4 feet over the same time.

Marshes are potentially resilient, but if they cannot build elevation quickly enough through deposited sediments to keep up with rising water levels, eventually marsh plants will drown and die. In this case, the marsh will become open water habitat. Understanding the dynamics of change at the marsh edge in elevation and water levels, therefore, can help coastal managers make better decisions about how to plan, prepare and adapt to sea level rise at our coasts. 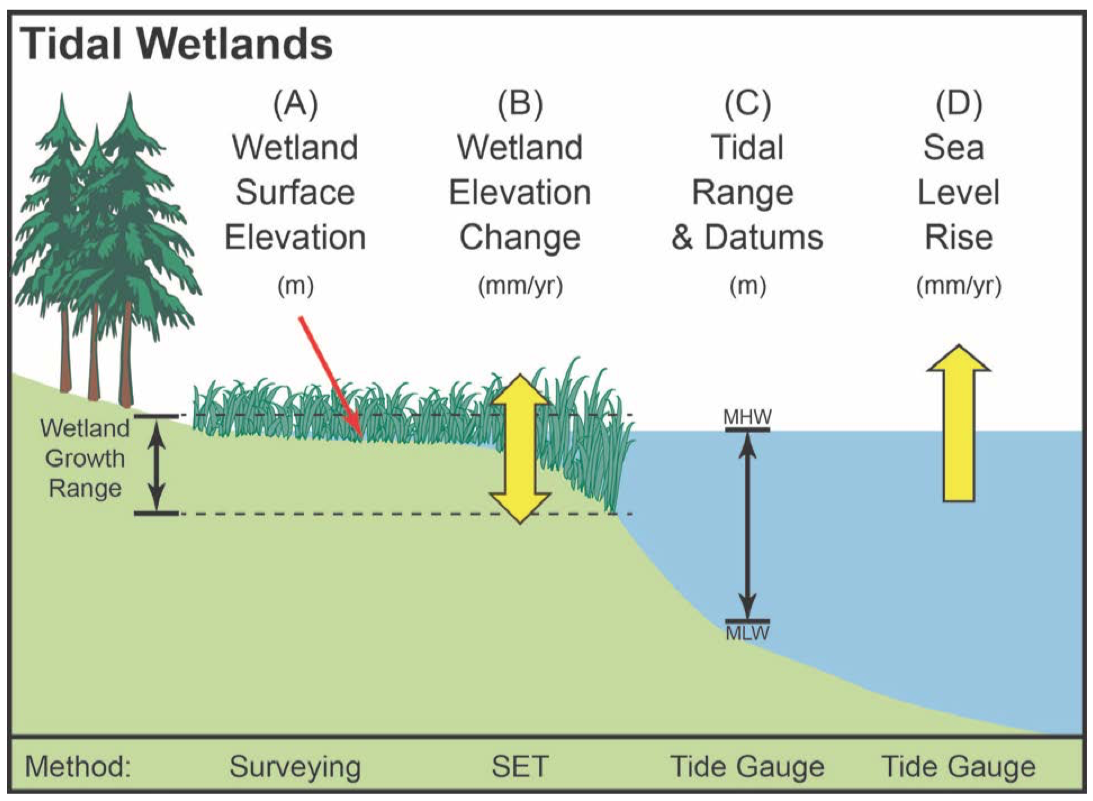 Changes at the marsh edge in elevation and water levels affect wetland survival. Image by U.S. Fish and Wildlife.

Just as scientists measure changes in water levels in millimeters per year — quite a tiny change when you stand on the beach looking out into the waves, contemplating the immense amount of water present — researchers also record changes in marsh surface elevations at a very fine scale. In 1992, Don Cahoon, an internationally recognized expert in tidal wetland elevation dynamics, installed what likely was the first surface elevation table (or “SET”) in North America, which he placed on Cedar Island.

SETs measure changes in the marsh surface elevation with 1.5 millimeters of precision. Although these instruments have provided data about coastal marshes in the United States for less than 30 years, NOAA’s Center for Operational Oceanographic Products and Services has been measuring sea levels for over 150 years. Tide stations operating along the coasts measure water levels locally by comparing them to specific points on land. Only more recently have researchers become interested in monitoring the changes in marsh elevation specifically for a better understanding of how marshes respond to sea level rise.

Often, scientists install SETs to find answers to specific research questions. For example, Jenny Davis and Carolyn Currin at the NOAA Beaufort Lab examined how the use of nutrient fertilizers affects marsh elevation. Their results, published in the journal Estuaries and Coasts in 2017, revealed that nutrient fertilization may be an effective adaptive management strategy for helping marshes keep pace with sea level rise. 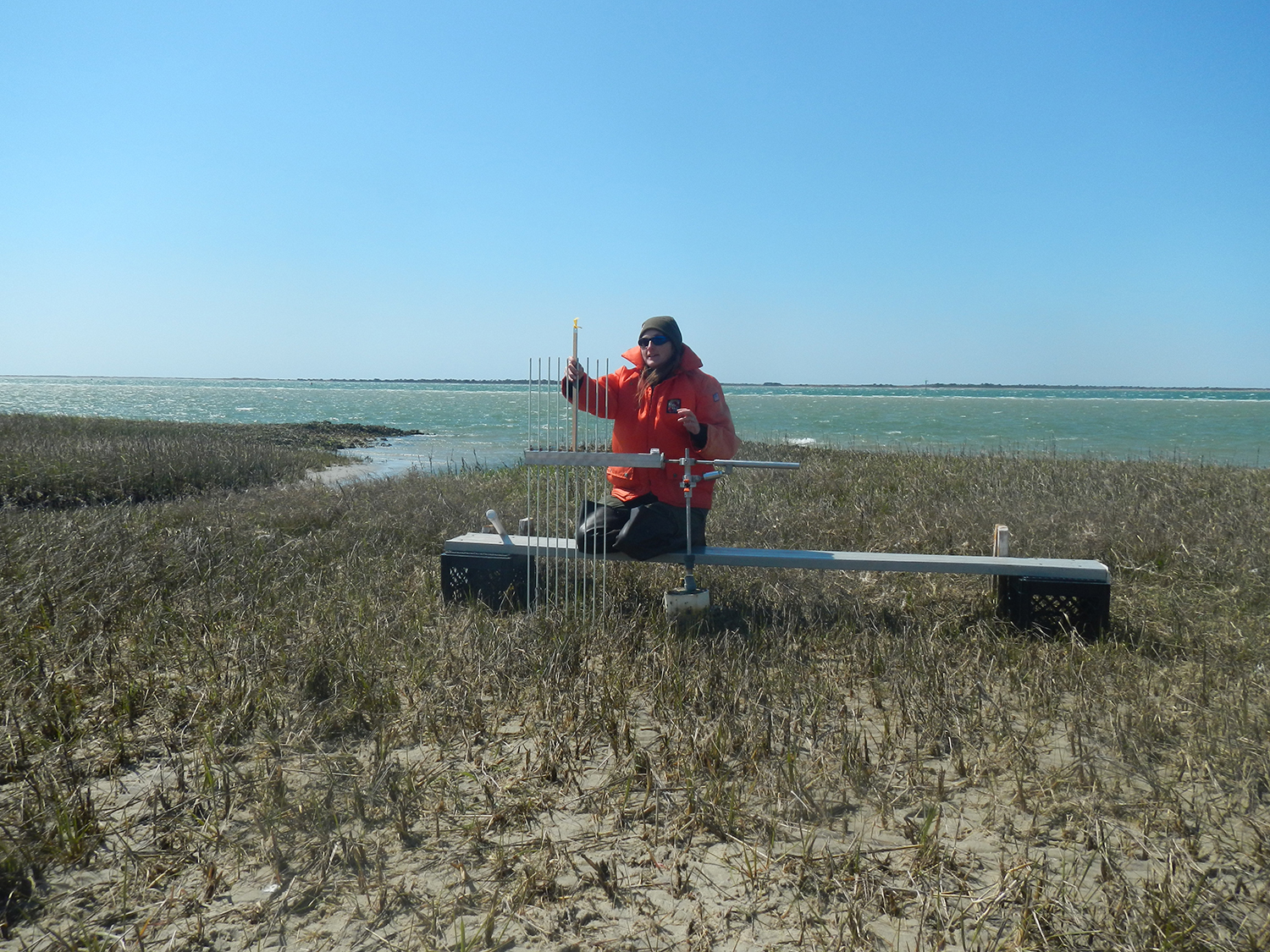 SETs are vital to understanding changes in marshes and can help us answer important questions, such as:

1) How is the surface elevation of the marsh changing?

2) Is the elevation of the marshes we study in North Carolina keeping up with local sea level rise?

SETs are relatively inexpensive to install and maintain, but they do require staff training and time to collect data on a consistent basis. Because researchers often install SETs for specific purposes, after funding ends some researchers may not have the resources or staff time available to keep taking SET measurements. However, SETs require relatively little maintenance. Even if months or years pass without measurements, a SET remains ready until the person-power is available again to collect data.

In North Carolina, we formed the “NC SET Community of Practice” in a collaborative effort among academic, governmental and private organizations that have installed SETs in order to measure and monitor how our marsh habitats are changing. This network includes scientists, resource managers and town staff invested in understanding the trends of elevation change in our marshes.

Most scientists who work with SETs agree they need to be installed for at least five years before the data can be used to start making predictions about the trends at a specific marsh site. And the longer the dataset, the better. The NC SET Community of Practice’s initial inventory, which Jenny Davis conducted at the NOAA Beaufort Lab, found 143 SETs in the state, with 107 now installed long enough to meet the five-year criteria.

As a result, the NC SET Community of Practice has recently created an interactive map tool and database of the SETs in our state, modeled on a similar effort from the Chesapeake Bay Sentinel Site Cooperative. The map also capitalizes on technical expertise available from the NOAA Beaufort Lab and NOAA Sentinel Site Program, providing researchers and resource managers with metadata from all the inventoried SETs in North Carolina and allowing them to view preliminary trends of land accretion (building) or subsidence (sinking) at marsh sites where researchers record SET data.

It is important to understand that marsh elevation is a useful measure in comparison to water level. If an increasing rise in water level outpaces an increasing rise in marsh elevation, that marsh is still drowning. As our NC SET Community of Practice analyzes and shares data, we will learn more about the trends in our marshes, how sea level rise will affect our coasts, and which side is prevailing in the battle of land versus sea.

Here’s how Surface Elevation Tables work — and what the first one installed in North America tells us. 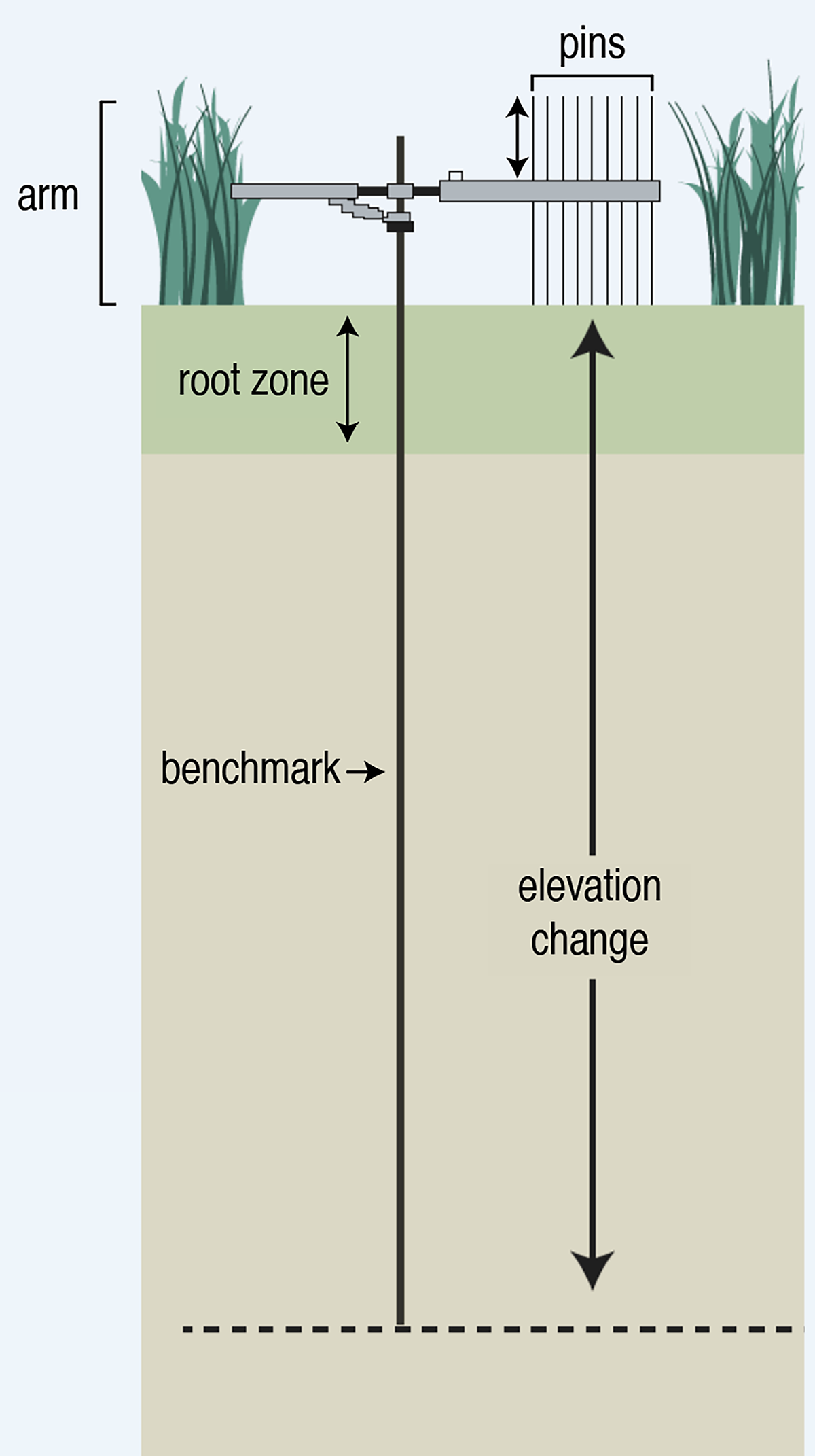 Each SET requires a metal rod, which researchers must drive 3 to 25 meters into the ground. The rod remains permanently installed in the marsh, providing a refer­ence point — or benchmark — in a marsh environment that constantly changes with tides, wind, storms and erosion. This benchmark allows scientists to measure and determine if the marsh is building or sinking over time.

Once the benchmark is in place, researchers attach a portable SET instrument to the permanent rod and then can take high-precision measurements of the marsh surface elevation. This portable device includes movable pins to measure the change in height of the surface of the marsh over time.

With researchers Jenny Davis and Carolyn Currin from the NOAA Beaufort Lab, Cahoon revisited the Cedar Island SET 23 years later. The data showed that from 1992 to 2015, on Cedar Island the battle of land vs. sea was a draw. During that time period, the island’s marsh kept pace with the local rate of sea level rise.

The SET interactive map will be available soon. Check back here. Meanwhile, listen to NOAA’s podcast on “Making Waves: Measuring Change in an Estuary.”

The City of Jacksonville Installs SETs

The City of Jacksonville in North Carolina was interested in learning whether its marshes were keeping pace with sea level rise. In the summer of 2016, Pat Donovan-Brandenburg, the city’s stormwater manager, teamed with NOAA researcher Carolyn Currin and former N.C. Sentinel Site Cooperative coordinator Jennifer Dorton to install six SETs in restored and natural marshes in Wilson Bay. Their work was part of a multidisciplinary Community Collaborative Research Grant (CCRG) project to study the effectiveness of restoration in the bay.

After installation, Currin trained city staff to read and collect data from the SETs — information the stormwater manager has continued to collect after the CCRG study ended. Donovan-Brandenburg also currently participates in the NC SET Community of Practice.

Today, Sturgeon City, the city’s Environmental Education Center on Wilson Bay, uses the SETs in its educational programming, which includes lessons and resources developed during the CCRG project.

Members of the NC Set Community of Practice 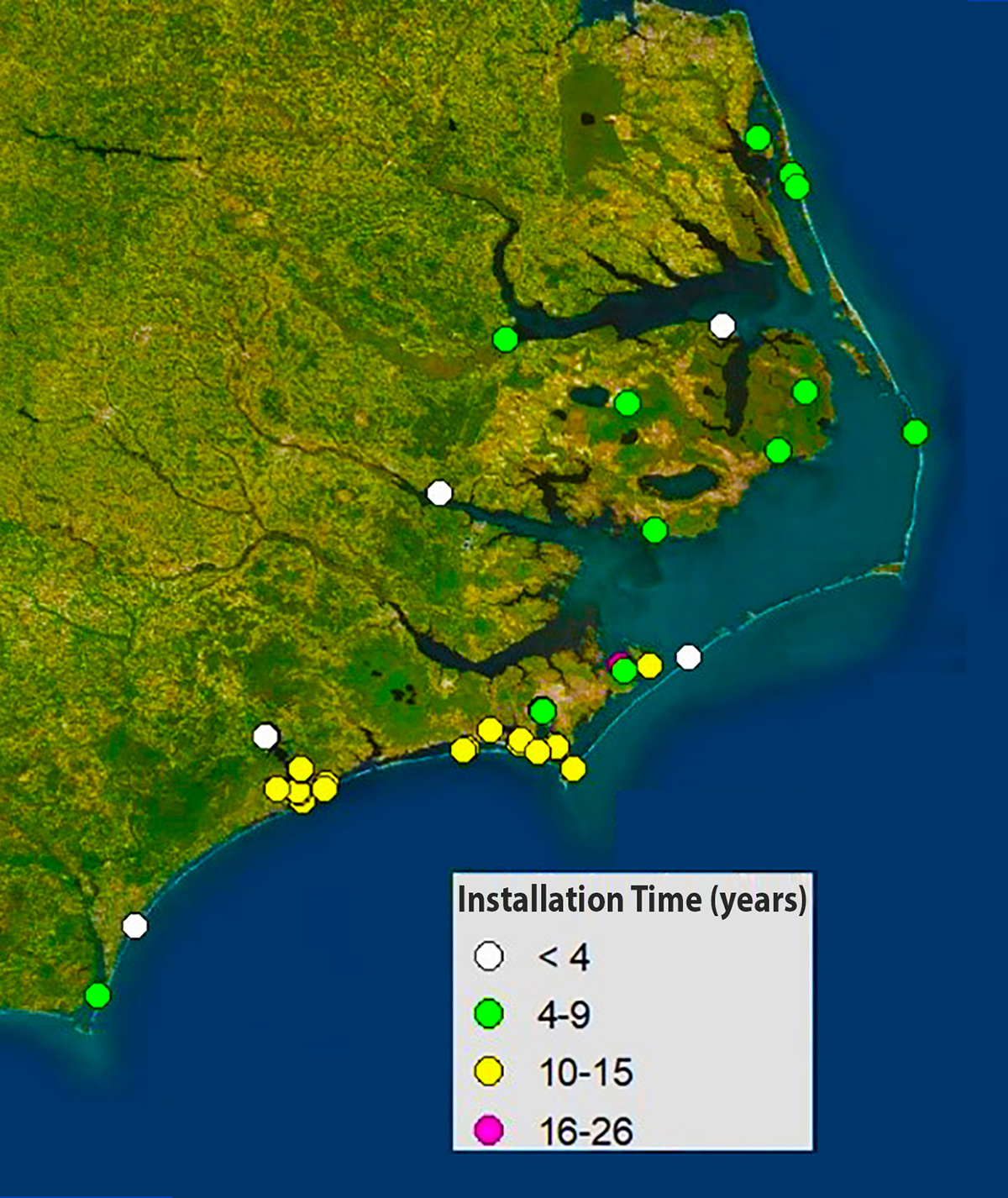 The NC SET Community of Practice is a collaborative effort among scientists, resource managers and town staff who have installed SETs and who are invested in under­standing the trends of elevation changes in our marshes.

The network includes members and affiliates of academic, governmental and private organizations: