Hook, Line & Science
Shark Thievery, American Shad in the Albermarle Sound, and How We Fished 12,000 Years Ago

How often do sharks swipe the catch?

A new study reveals that avid anglers are no strangers to opportunistic sharks — and this could impact shark conservation.

Many species of shark are found year-round off the North Carolina coast, but several open-ocean species will venture closer to shore come early spring. This can either provide the thrill of a big fight for these catch-and-release species or cause dismay over the loss of bait and gear — or, even worse, cause dismay over losing prize fish catches to hungry sharks.

“Shark depredation” — when a shark takes part or all of a hooked fish before an angler or commercial fisher lands it — is increasing in the United States, according to anecdotal reports. Most research on perceptions of sharks has focused on people whose livelihoods depend on the fish they catch (or don’t catch, thanks to the sharks). But do anglers’ experiences with sharks impact their support for shark conservation? Is the rise in recreational shark fishing in any way correlated to personal experiences and second- hand accounts from friends and family?

A research team set out to study the impact of sharks on recreational fishing experiences, using an online survey of saltwater anglers in North America.

Anglers who had experienced depredation in the last five years also received specific questions about those events.

Most of the anglers who took the survey were male (89%), between the ages of 25 and 44 (51%), and considered themselves avid anglers (68%) who fish more than 30 times a year. Of the 541 people who responded, 77% had experienced depredation in the last five years, more commonly in the Southeast than other areas.

The most frequently depredated fish included various tuna species, king mackerel, and various snappers, though these numbers primarily are due to the large number of respondents from the southeastern U.S., particularly Florida.

In the northeast, the most frequently depredated species were striped bass, black sea bass, and pollock, and, on the West Coast, anglers most frequently reported that sharks took tunas.

All told, 87% of guides experienced depredation when fishing with clients and overwhelmingly reported that depredation has a negative effect on their livelihood.

While many anglers reported that they would not change their behavior after experiencing depredation, guides said they were much more likely to target and harvest sharks in the future, as well as much less likely to fish in the same area again.

Such behavior change — to target and harvest sharks recreationally — results in the potential for shark depredation to have lasting management implications both for the species anglers target and for shark populations.

An archeological site has revealed an enormous collection of early hooks, lines, and sinkers — and even evidence of artificial lures.

Catching fish on a regular basis — notice I said catching, not just fishing — can require significant skill and attention to the craft.

In short, anglers can gain a lot of information by studying other successful fishers, the tackle they prefer, and how they use it. In a way, archaeologists are like anglers in that both groups attempt to gain new knowledge from people who came before them.

Over the last 10 years, archeologists have discovered many well-preserved bone fishhooks, smooth grooved stones (thought to be early sinkers), artificial lures, and evidence of plant-based fishing line, all in the Hula Valley of modern-day Israel. The site represents one of the largest collections of early hook and line fishing tackle.

So, what can we learn about early fishing practices?

With access to the largest and most complete gathering of early fishing tackle remains, investigators sought to better understand how people made the items and fished with them. The team conducted archaeological, technological, and microscopic examinations to explore original uses for the fishing tackle.

Hooks shaped from bone came in assorted sizes, with many including an outward facing barb. These hooks did not have eyes to attach line. Instead, the barbs, in combination with single and double knobs kept the line secure on the hook. The line also could have wrapped around a large portion of the hook shank. In some instances, adhesive was used to attach lines to hooks.

Several pebbles with grooves created by hand tools were found in the same area as the hooks. Thought to be sinkers, all pebbles were of comparable size and still had small remnants of early fishing line attached.

Fishing line was not discovered intact but in small fragments attached to hooks and grooved pebbles. Composed of unidentified vegetative material, the line would have been strong enough to retrieve at least a 2-pound fish, according to the research team.

The presence of deep grooves, adhesive, and animal hair on two hooks from the site also confirm that artificial lures were in use 12,000 years ago. The researchers think that early fishers may have attached small pieces of shell — which displayed a mother of pearl color pattern — to attract fish as the lure fluttered in the water.

The study site indicates that fishing occurred in shallow water close to the lakeshore. People most likely left hooks near the water’s edge accidentally or when the hooks broke during use.

In addition, the fish remains found at the site indicate that catch was composed of at least three fish: Cyprinidae (the same family as carps and minnows), Cichlidae (the family that includes tilapia), and probably Salmonidae (which today includes salmon and trout).

Fishers 12,000 years ago were more sophisticated than we previously thought. The skill required to manufacture and assemble hooks, line, and sinkers in combination confirms that fishers had a deep understanding of fish behavior, including feeding, and that they developed strategies for capture.

I assume they shared their personal tips and tricks with others… 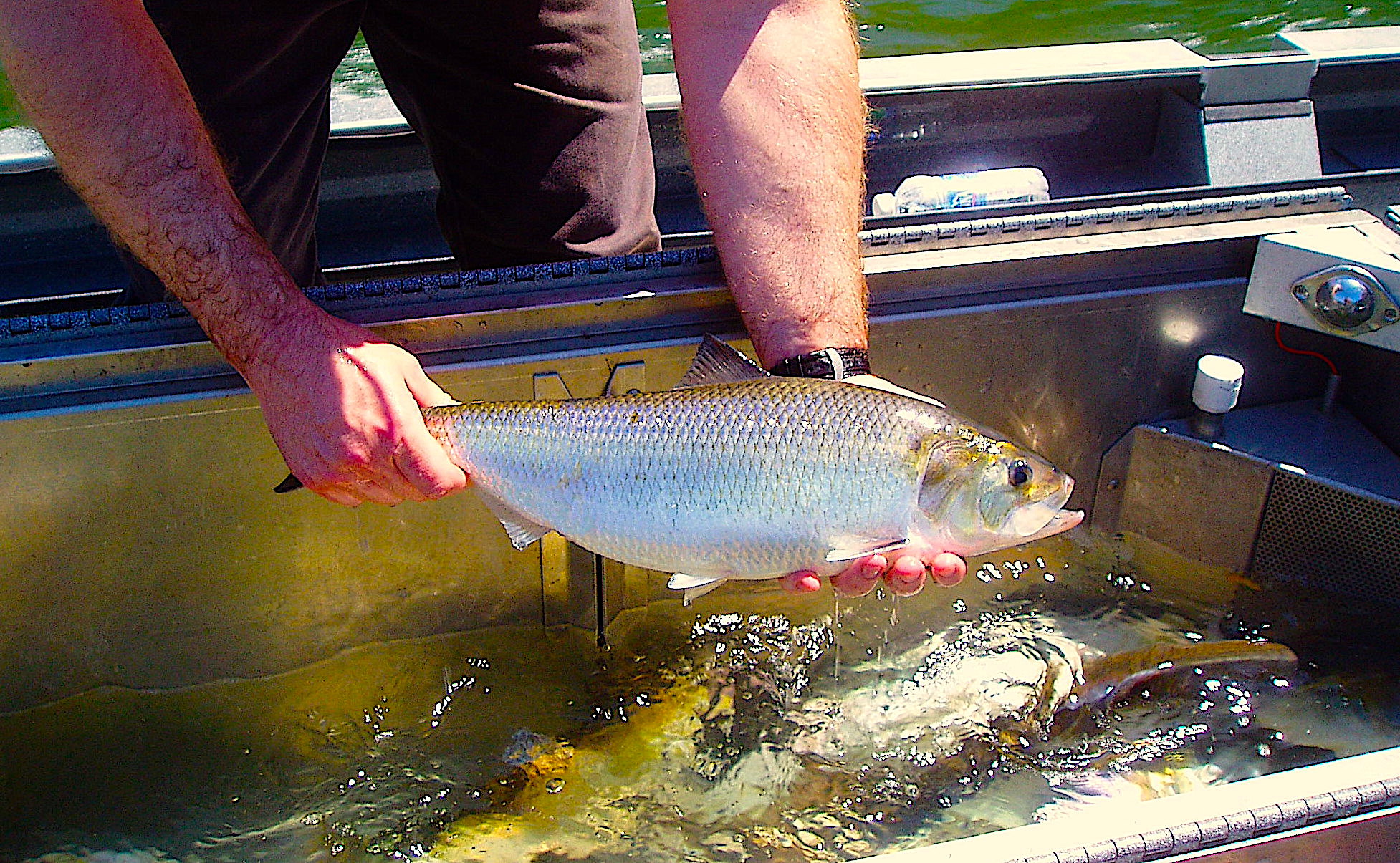 From late February through early April each year, American shad, often called “white shad,” return to North Carolina coastal waterways, headed for obscure backwaters where they complete their mating rituals and lay eggs before returning to sea. This fish population may be making a comeback — due to activities like state stocking of recently hatched shad — but not to the extent managers hoped.

American shad once supported one of the largest commercial fisheries along the Atlantic Coast. Dams and other man-made impediments that block spawning habitat in rivers, combined with habitat degradation and overfishing, severely depleted American shad populations. In 2005, fishery managers closed commercial ocean fishing for this species, yet the most recent coastwide stock assessment found that most American shad stocks remain at all-time lows.

It is believed the fish generally return to their birthplace to spawn. For example, fish entering the Albemarle Sound to spawn primarily swim upstream on the Roanoke River or the Chowan River. Determining the current primary spawning river for American shad in the Albemarle Sound would help inform research efforts and resource management decisions to improve stocks.

For much of the time period from 2013 to 2019, state biologists tagged and released a total of 266 adult American shad from various locations within Albemarle Sound. A small sound-emitting “acoustic tag” allows the detection and remote tracking of organisms in aquatic ecosystems. An array of acoustic receivers at ocean inlets and throughout the Albemarle Sound, the Chowan and Roanoke rivers, and their smaller tributary rivers detected fish as they migrated.

Of the 266 tagged fish, receivers subsequently detected 212. The 56 other fish presumably died not long after tagging. In over half of the detected fish (114 of the 212), tagging resulted in the fish aborting their spawning runs and moving back downstream; 28 of those fish did resume a spawning run later (on average, after 11 days), but 86 fish left the system entirely.

The observed higher use of the Chowan River over the Roanoke River (56 runs, compared to only 5) for spring spawning migrations could partially be the result of differences between the two river basins. The Chowan River and its tributaries offer significantly more unimpeded miles of river: 610 miles, compared to 214 miles.

These findings suggest that over many years the Roanoke River population of American shad may become depleted, compared to the population that is homing to the Chowan River.

Despite American shad in the Albemarle Sound system typically experiencing multiple reproductive cycles over the course of a lifetime, the research team detected only a single fish that made a repeat migration, and that was into the Chowan River in 2013 and 2014. This might be because of the relatively low sample size of the study and the high rate of mortality from tagging (presumably about 20%).