Above: Plastic pollution comes in a continuum of sizes and shapes. Image by Merel Kooi/ Wageningen University & Research

When Durham-based artists Jaclyn Bowie, Nyssa Collins, and Anna Wagner set out to create an outdoor sculpture made of rubbish at Walnut Creek Wetland Park, they wanted their subject to resonate with the local community. The urban nature center, located a short drive from downtown Raleigh, is popular with school groups, families, and other visitors.

“What would be something that many people of many different ages and backgrounds could connect to?” Bowie recalls wondering.

Inspiration struck when the trio was collecting trash for their piece from Walnut Creek, part of the Neuse River watershed. Inside a waterlogged tire, they spied a small catfish. Intrigued, they later researched catfish and came across the Carolina madtom (Noturus furiosus), a diminutive freshwater species native to the Tar and Neuse river basins. The fish has nearly disappeared from the latter because of habitat loss and water quality degradation, among other problems, and the N.C. Endangered Species Act considers it “threatened.” 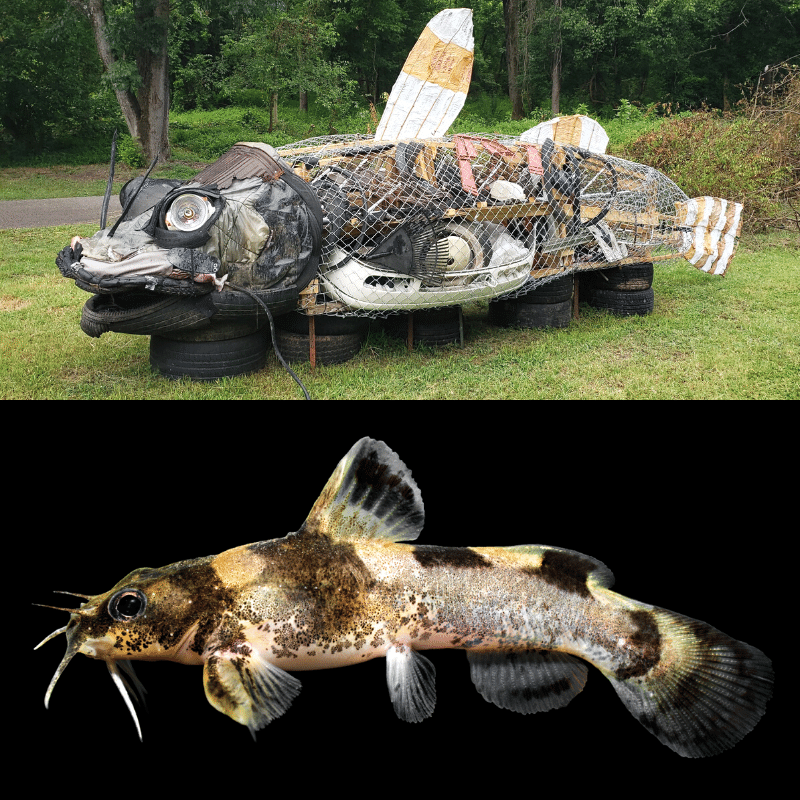 Durham artists created this sculpture of a Carolina madtom catfish out of trash. The species, Noturus furiosus, is native to the Neuse and Tar river basins. Top photo by Lauren D. Pharr; bottom photo courtesy of NCFishes.com

In that 5-inch fish the artists found their muse — only their sculptural rendition is larger-than-life and composed almost entirely of litter they gathered from local waterways and diverted from dumpsters. Stretching 20 feet and weighing an estimated 800 pounds, the finished piece is stuffed to the gills with sundry discards such as a car bumper (it adds shape to the frame), DVDs (they lend sheen to the eyes); a hobbled carousel horse, and “tons of plastic bottles.”

“It puts art supplies in a new light,” Wagner says.

The formidable fish out of water is also a stark symbol of how much refuse can be found in river systems. As conduits to the sea, rivers are prime channels for marine debris, a catchall term to describe solid, manufactured, or processed material that ends up in the marine environment.

“A lot of times we throw things away and think that they don’t exist anymore,” Collins says. Their sculpture is a reminder that “the things that you discard are still around, and we need to reckon with them.”

“Plastic has been found in fresh and salt water, sediment like sandy beaches and soils, and in our food,” says Sarah Latshaw, Southeast regional coordinator for the National Oceanic and Atmospheric Administration’s Marine Debris Program.

Last September, researchers reporting in Science estimated that in 2016, 19 to 23 million metric tons, or 11%, of plastic waste generated globally entered aquatic ecosystems, including freshwater and marine environments. The team predicted that annual emissions could reach up to 53 million metric tons per year by 2030, despite ambitious global reduction efforts.

When it comes to marine debris, plastic forms the majority of pollution. Usually between 60 and 90% of the trash that gathers on shorelines, the sea surface, and the sea floor is made up of one or more plastic polymers.

Plastic litter occurs in an array of shapes and sizes, from dozens of feet long to practically invisible to the naked eye. The tinier pieces, known as microplastics, occur through two means: Either they are purposefully manufactured — one example is plastic pellets, or nurdles, which are melted down to make other items — or they form when larger plastic pieces degrade or fragment. The breakdown of so-called macroplastics is the primary way that those minuscule pieces form. 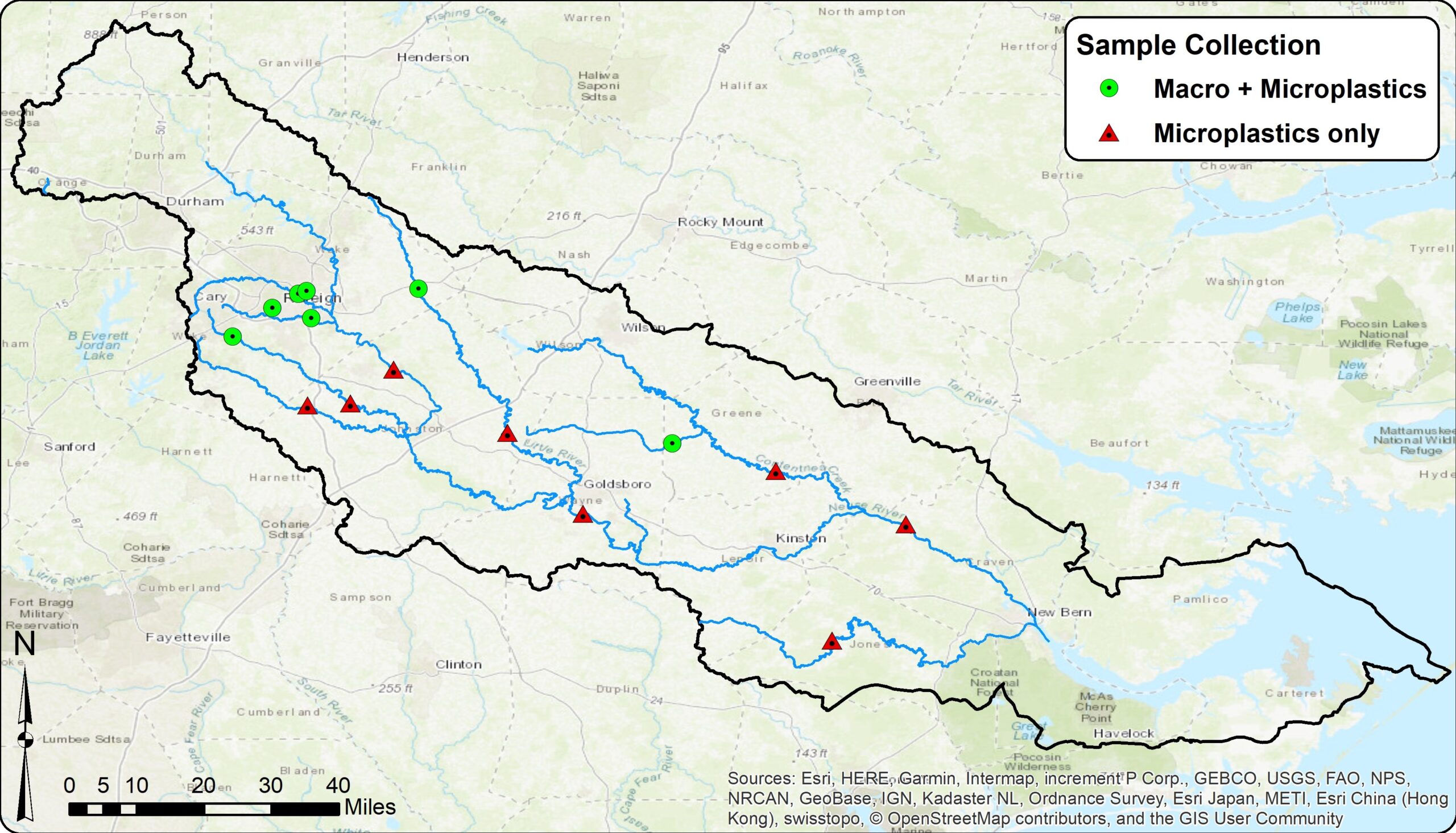 A research team is gathering litter from 15 sites within the Neuse River Basin as part of a study on plastic loading into Pamlico Sound. Image by Jack Kurki-Fox/NC State University Department of Biological and Agricultural Engineering

Our understanding of the health and ecological impacts of plastic pollution ranges from well-documented to limited. Where macroplastics are concerned, the deleterious effects can be easy to see. For example, derelict fishing gear can entangle marine mammals, seabirds, and sea turtles, among other creatures.

Marine debris might also contribute to the spread of invasive species by providing artificial habitats. Indeed, researchers have found species rafting on marine litter outside of their typical range.

In 2013, scientists described a rich microbial community that lives on plastic litter — the “plastisphere.” A recent paper noted that understanding how those microbes affect processes like plastic degradation and chemical cycling is “an important area to explore.” 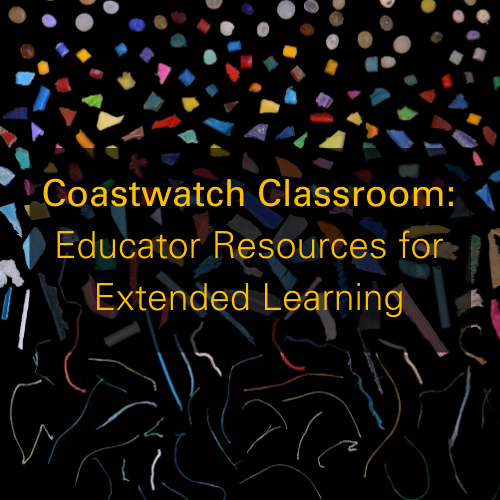 Lab experiments have found microplastic exposure to cause reduced feeding, survival, and reproductive success in organisms such as mussels, oysters, copepods, and lugworms. However, such studies typically use particle sizes that are smaller, or concentrations that are greater, than those generally reported in the field.

“It’s the dose that makes the poison,” says Bart Koelmans, an environmental scientist who studies microplastics at Wageningen University in the Netherlands. For any chemical, “you cannot say it’s inherently safe or toxic.”

For now, experts like Koelmans generally consider the ecological risks of microplastics to be rare. However, if emissions remain the same or increase, he says, it’s not a matter of if, but rather of when, adverse effects become widespread.

Plastic marine debris comes from a variety of sources, both land-based and sea-based.

On the water, ships lose cargo, garbage floats off boats, and fishing gear goes rogue, to name a few means of dispersal. Deliberate dumping occurs, too.

Globally, one of the largest contributors to marine debris is poor waste management on land. Trash and particles can escape at any point in the process due to inadequate procedures.

Even seemingly proper waste disposal can go awry. For instance, “materials that are placed in blue recycle bins, at your curb, could become marine debris on a windy day,” says Lisa Rider, executive director of Coastal Carolina Riverwatch.

Unbridled plastic can eventually escape terra firma by sliding down storm drains, riding on wind, or washing into rivers — the routes are many.

In 2017, a study published in Nature Communications estimated that rivers alone potentially deposit more than 2 million metric tons of plastic waste into the ocean each year. A related paper, submitted for publication by Science Advances, found small urban rivers to be among the most polluting. 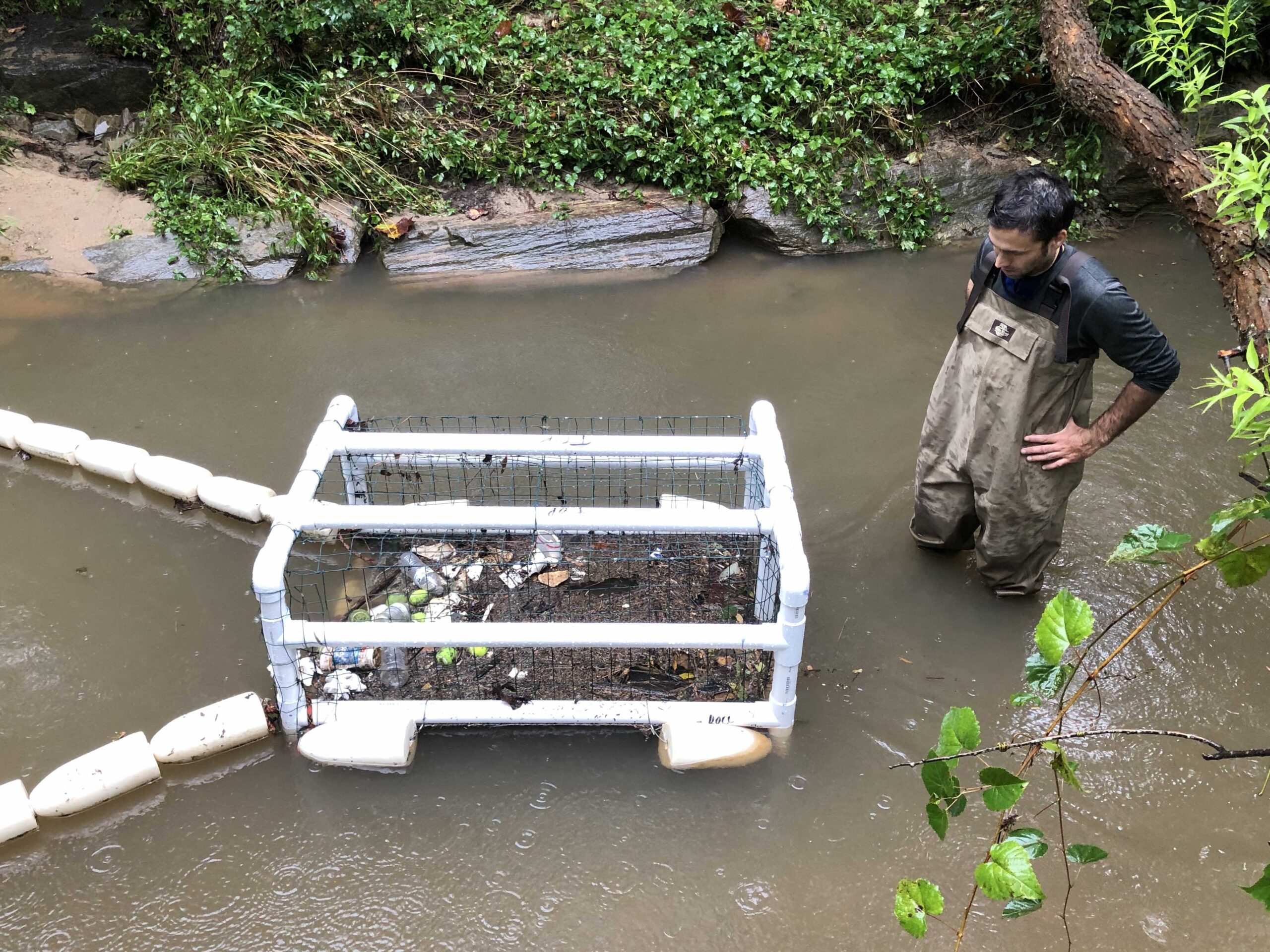 Here in North Carolina, no studies to date have quantified the amount of plastic in our coastal waters, or estimated how much is coming from rivers, according to Barbara Doll, North Carolina Sea Grant’s water protection and restoration specialist and a faculty member of NC State University’s Biological and Agricultural Engineering Department.

To that end, Doll, along with N.C. Sea Grant coastal resources and communities specialist Gloria Putnam and NC State University research associate Jack Kurki-Fox, are investigating the plastic that wends into coastal waters from inland sources.

With funding from NOAA’s Marine Debris Program and National Sea Grant Office, they are sampling what kinds of plastic, and how much, course through the Neuse River watershed, which drains an area of nearly 5,600 square miles to Pamlico Sound, North Carolina’s largest estuary.

The sampling sites cover a range of drainage areas and a variety of land use. While the upper watershed is highly developed, agricultural and forested land dominate the lower portion.

At 15 sites, the team is using a fine mesh net to gather samples of microplastics for later analysis in the lab by the nonprofit organization Plastic Ocean Project, based in Wilmington. At seven of those sites, the researchers are also gathering data on macroplastics through visual assessments, as well as by physically collecting trash and taking stock of the haul.

“How much of this trash is coming from urban versus rural areas into our rivers?” Doll says. “We hope to identify relationships between watershed characteristics and the type and amount of micro- and macroplastics you find.”

The study will end about a year from now, but the team already has some preliminary data. For example, during a recent visual assessment on a rainy day at Marsh Creek in northeast Raleigh, in under 30 minutes Putnam counted nearly 150 plastic containers — mostly drink bottles — floating downstream, among other litter.

“This method of counting floating plastic provides a low-cost tool to help us characterize how much and what kind of material is moving through our urban waterways to the Neuse River,” Putnam says.

Simply considering the Marsh Creek tally, it’s no wonder that artists Bowie, Collins, and Wagner had plenty of media to build their sculpture.

Taking Out the Trash

Battling the juggernaut of plastic pollution demands a multipronged approach.

“Plastic is complex, but society is even more complex, and there is no silver-bullet solution for the plastic problem,” says Koelmans of Wageningen University.

One important approach entails curbing plastic consumption. “By reducing waste at the source, or making purchases that reduce waste through reuse, you are working towards eliminating the possibility of consumer marine debris,” says Rider of Coastal Carolina Riverwatch.

For its part, North Carolina is addressing the challenge of marine debris through state and regional efforts. For example, in 2019, representatives from agencies and organizations in Georgia, South Carolina, and North Carolina completed the Southeast Marine Debris Action Plan, an effort to improve coordination throughout the Southeast region over the next three years.

“The North Carolina Plan’s leadership team and stakeholders participated in the development of the Southeast Plan to ensure both plans complemented each other,” says NOAA’s Latshaw. “While the Southeast Plan is focused on broad regional topics to reduce marine debris within and across state borders, the North Carolina Plan is able to focus on specific state actions.”

“I think that the collaborative group has done a really great job to do check-in calls or check-in virtual meetings with folks that are interested in keeping the [N.C.] plan updated and fresh,” says Rider, who founded the N.C. Marine Debris Symposium. “We don’t want this plan to just sit on a shelf. We want it to be a plan that evolves over time.”

In February 2020, the Town of Beaufort became the first community to officially endorse the state plan. “The vast amount of debris and toxins going into our waterways is unsustainable,” Mayor Rett Newton proclaimed, according to the Carteret County News-Times. “It is bad for the health of our citizens and visitors, bad for the health of our amazing coastal ecosystem, and it is bad for commerce. We must greatly reduce (and eventually eliminate) these pollutants.” 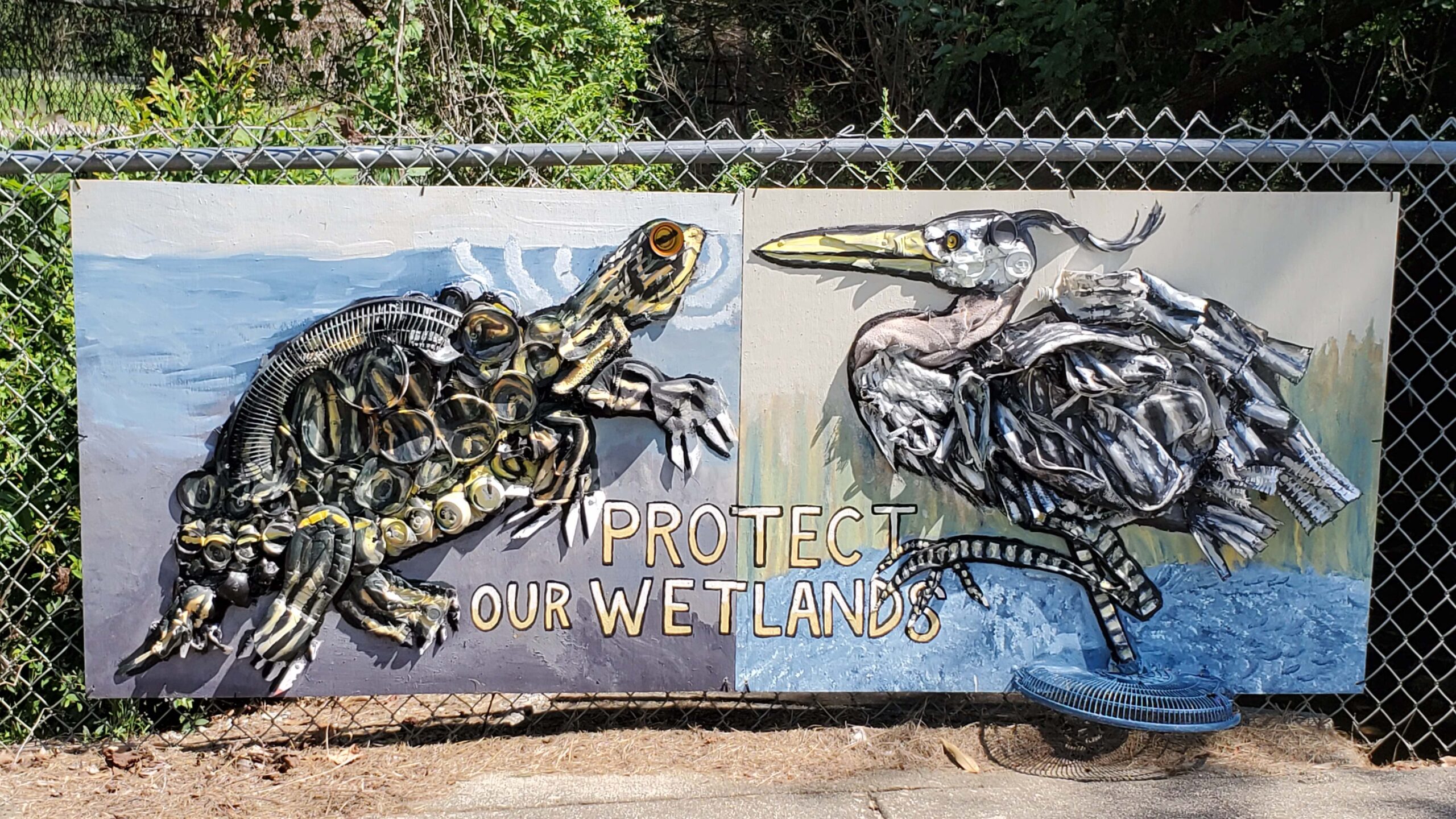 Raleigh Arts, part of the city’s Parks, Recreation, and Cultural Resources Department, originally put out a public art call for a litter sculpture as part of Mud Day. The community festival, held at Walnut Creek Wetland Park, is designed to celebrate nature.

Bowie, Collins, and Wagner had planned to include members of Conservation Corps North Carolina — a group of young people who work on outdoor projects — to help them collect trash for their catfish installation, but plans changed when Mud Day was canceled because of the COVID-19 pandemic.

But the artists were still able to include Conservation Corps in a smaller, related project: a wetland-themed sign featuring a yellow-bellied slider and a blue heron, adorned with local litter.

Despite the setbacks, the artists were pleased with their project. “It was so nice to bring art to people who hadn’t necessarily gone to seek it out,” Wagner says.

“It makes me very happy to see a local animal species shared with the community in a beautiful way,” Perrin says. “For me, it is a poignant connection between the trash that we throw away and the animals that our actions impact.”

For more on plastic pollution in the marine environment: