Underwater sound s can provide important clues about the ecological health of a reef fish community.

One of the most common ways to assess the impact of a disturbance on a population or community of fish is to look at changes in the diversity and numbers of fish in a location.

Sound, however, also is a driving force of ecological function. Whether fish are capturing prey, avoiding predators, listening for weather changes, or communicating with other species, they rely on sound as a critical component of normal function.

Thus, the underwater “soundscape” — the collective sounds from marine life and naturally occurring events (such as breaking waves) — is important to study and understand, especially if and when the soundscape fluctuates. In fact, changes to a marine environment’s soundscape from human causes or natural causes (like hurricanes) can directly impact overall ecological health and the well-being of individual species.

But, not much is known about storm impacts on coral reef soundscapes.

Sea Grant Knauss fellow Kayelyn Simmons and her colleagues examined the impacts of Hurricane Irma on the soundscape at two reef sites within the Florida Keys National Marine Sanctuary. Hydrophones recorded the underwater sound levels at the reefs in the months leading up to Irma, during the hurricane, and after the storm passed.

Generally, sound production by reef fishes varies between daytime and nighttime. From the hydrophone data, the scientists were able to differentiate the noise patterns of different species in the soundscape to assess whether the hurricane disrupted this pattern.

The team observed that, on short time scales, daily patterns in the coral reef soundscape were resilient, despite “acoustic energy” (sound waves traveling through the water) during the storm and despite changes in environmental conditions resulting from hurricane damage.

Before the storm, the soundscape included a distinct daily, low-frequency pattern from sound-producing fish (including sea basses, groupers, snappers, drums, and grunts). During the twilight periods, there was increased high-frequency sound from snapping shrimp. In the weeks following the storm, the sound patterns produced by the fish were similar to those before, and the high-frequency noise associated with snapping shrimp showed only a small shift.

As the storm passed, the cumulative acoustic energy near the seabed was comparable to a small vessel operating continuously overhead for 1 to 2 weeks, depending on the study site. 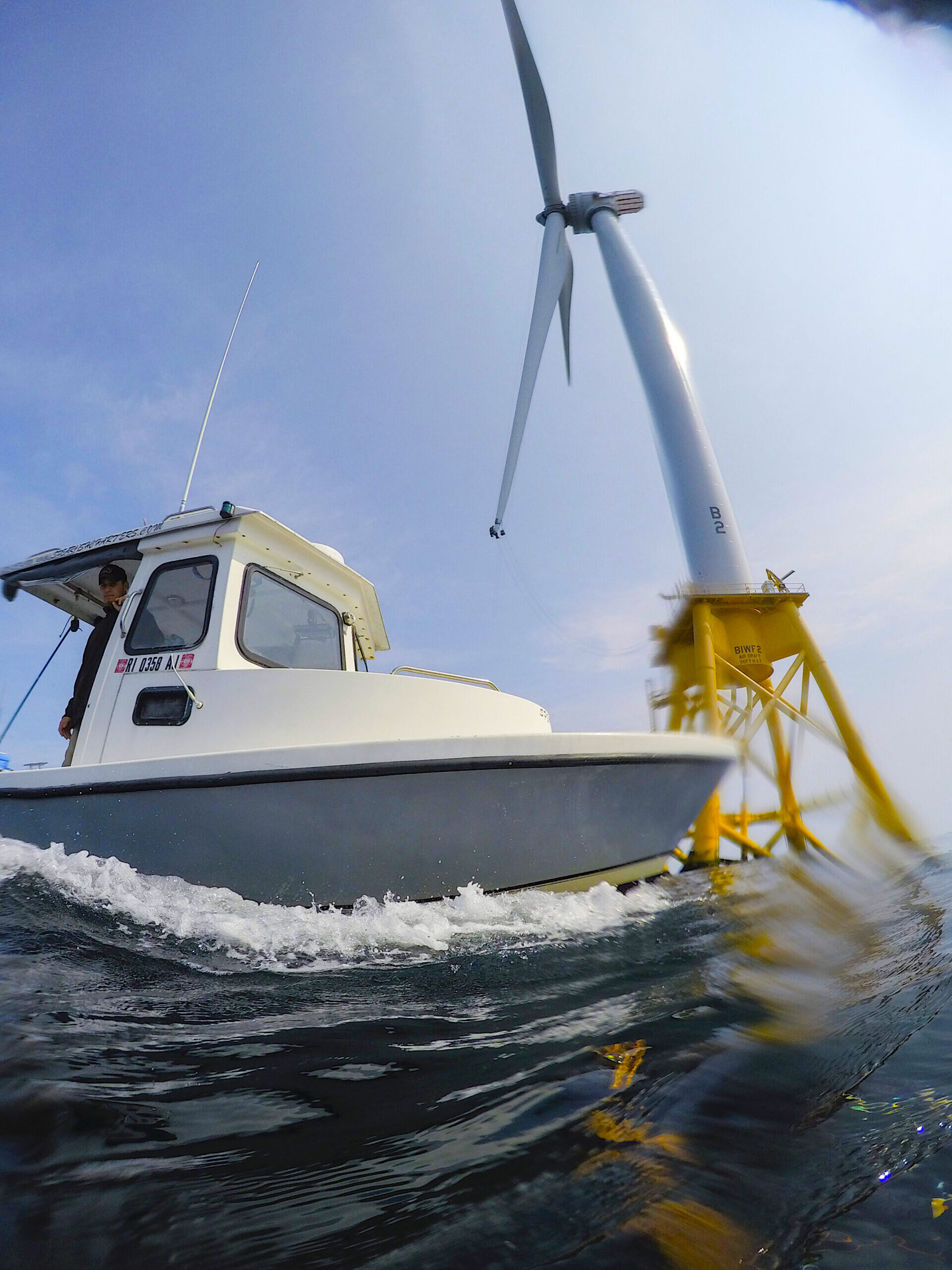 Yes — but maybe not like you think they would.

Offshore Wind Farms (OWFs) have emerged as the most common form of marine renewable energy generation. In fact, the U.S. has 16 active offshore wind farms covering over 1.7 million acres along the Atlantic coast.

Although interests in renewable energy has grown along with the expansion of OWFs, concerns from coastal communities, as well as from commercial fishers and recreationalists, also have increased. Recreational anglers, in particular, sometimes target fish in specific locations, which could cause potential conflicts with OWFs.

Therefore, understanding attitudes and behaviors of anglers towards OWFs has the potential to inform ocean management and avoid conflicts.

There have been few studies to assess the impact of OWFs on recreational anglers. Little research has attempted to document angler behavior or to understand their motivations and the factors that affect their satisfaction with fishing trips to OWFs.

Rhode Island’s Block Island Wind Farm (BIWF), which in 2016 was the nation’s first OWF to open, provided an opportunity for researchers to assess the impact of an OWF on anglers’ experiences.

To begin understanding interactions between OWFs and recreational anglers, researchers assessed the impacts of the Block Island Wind Farm through a combination of research methods. Initial interviews with anglers informed questions for a survey, and survey results then guided the team as it conducted follow-up interviews.

Data from the surveys confirmed that anglers, specifically those who fished at the wind farm, strongly believe that the wind farm has benefited fishing. They also value the wind farm’s purpose of generating “green” energy. However, some anglers also reported their concerns about increased crowding at the OWF, which they feared could lead to future restrictions on fishing access.

The foundations of the turbines on the BIWF provides structure throughout the water column. As a result, some anglers described the turbines as “growing food” for fish, noting that the structure creates water flow that “tosses the little bait [fish] around.” Anglers reported that this brought more recreationally popular species— such as black sea bass, fluke, and scup — to the BIWF site.

Additionally, the BIWF can give anglers the opportunity to see or catch new species not normally found in the region.

Results from this study suggest that OWFs do not conflict with angling. Instead, anglers view BIWF as an enhanced fishing destination. The research team recommends future study of ocean-goers to inform managing issues (like crowding and access) — and to consider the benefits of nearshore OWFs for anglers and other stakeholders. 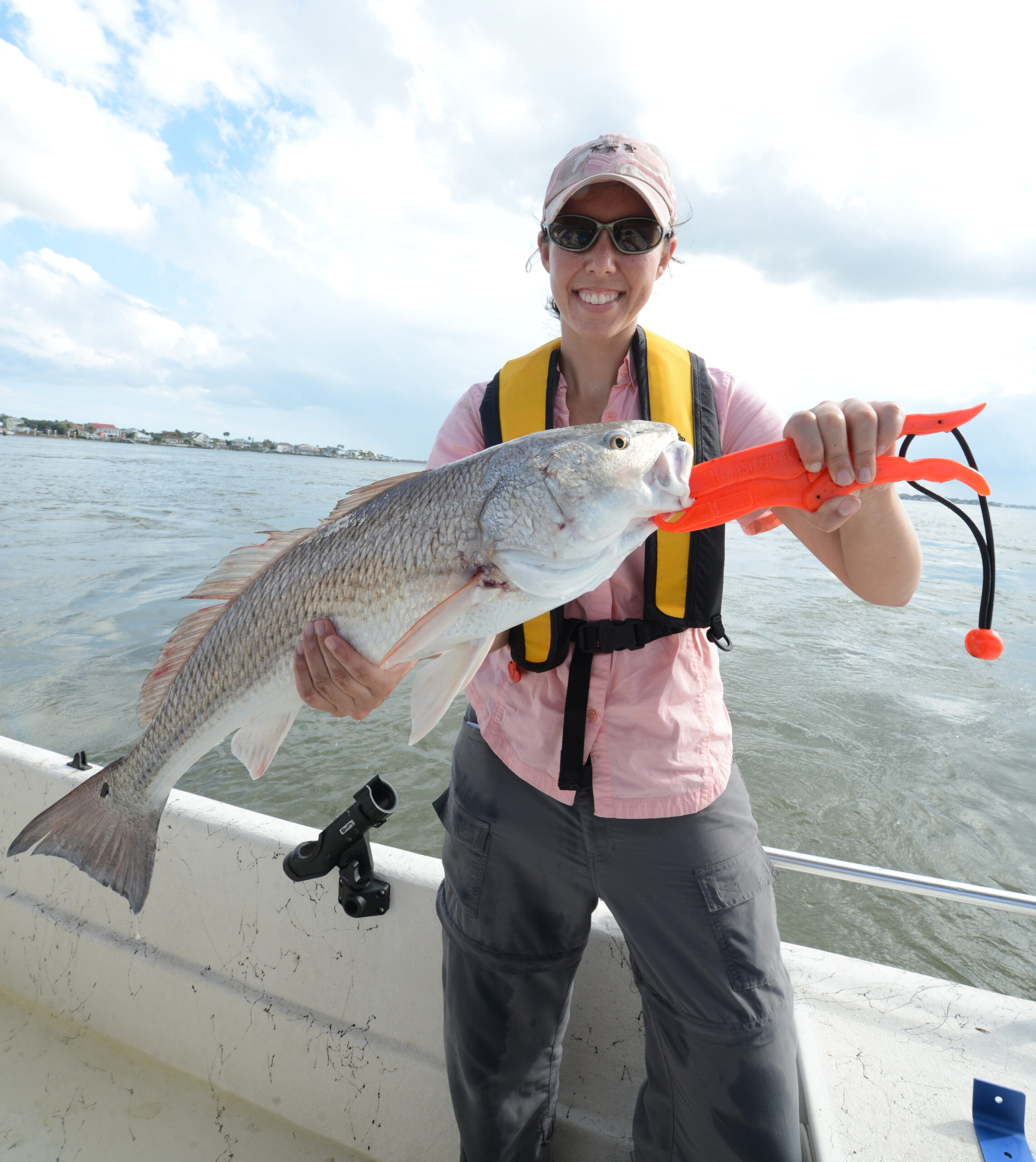 What happens to red drum and spotted sea trout after live weigh-ins at tournaments?

Red drum are slower to leave the area after release, and fewer die after tournaments than spotted sea trout.

Catch-and-release fishing is an ideal way to enjoy the sport while reducing pressure on popular fish stocks. Red drum and spotted sea trout are two of the most popular fish among saltwater anglers — and they’re also the focus of many saltwater fishing tournaments.

Some tournaments have adopted the live weigh-in format, where anglers must bring in fish alive. After anglers catch fish, they transport them to the tournament headquarters, where officials measure and weigh the catch, ultimately to release the fish back into the surrounding waters to be caught another day.

We know that a large percentage of red drum and spotted sea trout survive catch and release during recreational fishing — but what about survival after the tournament weigh-in process? If they do survive, how long do they hang around the tournament site, and then where do they go?

Scientists worked with fishers and organizers of the 2016, 2017, and 2018 Alabama Deep Sea Fishing Rodeo to track the survival rates and movements of live red drum and spotted sea trout after live weigh-ins. They documented the condition of the fish and where anglers caught them (when known), as well as length and weight. Scientists also implanted both an electronic acoustic tag and used an external streamer tag to aid in following the fate and location of each fish after release.

Estimates of the survival rates of both species fell within the documented range of recreational catch-and-release rates. Specifically, 6.1% of red drum died after weigh-ins, much lower than 30.6% of spotted seatrout that died.

Although researchers didn’t account for summertime water temperatures in their model, warmer waters could have negatively impacted the survival of both species.

Based on the data obtained in this study, the research team suggests that red drum and spotted seatrout tournament organizers should consider moving to live-release events only and hold them outside of summer conditions whenever practical.

Read the full studies and more at HookLineScience.com