An Angler-Inspired Approach:
How Descending Devices Can Save North Carolina’s Reef Fish

To reduce barotrauma and increase rates of survival during catch and release, descending devices are now required on all vessels targeting snapper and grouper in the Southeast.

“I’m not going to lie to you,” warns Captain Andy Piland, relaying the early morning marine forecast for Hatteras to the small group huddled on the dock. “It’s going to be rough out there.”

After experiencing a run of weather-related cancellations and delays for other charters, passengers Ashley Oliver and Meg Withers aren’t going to let their only fishing window in months slip away. 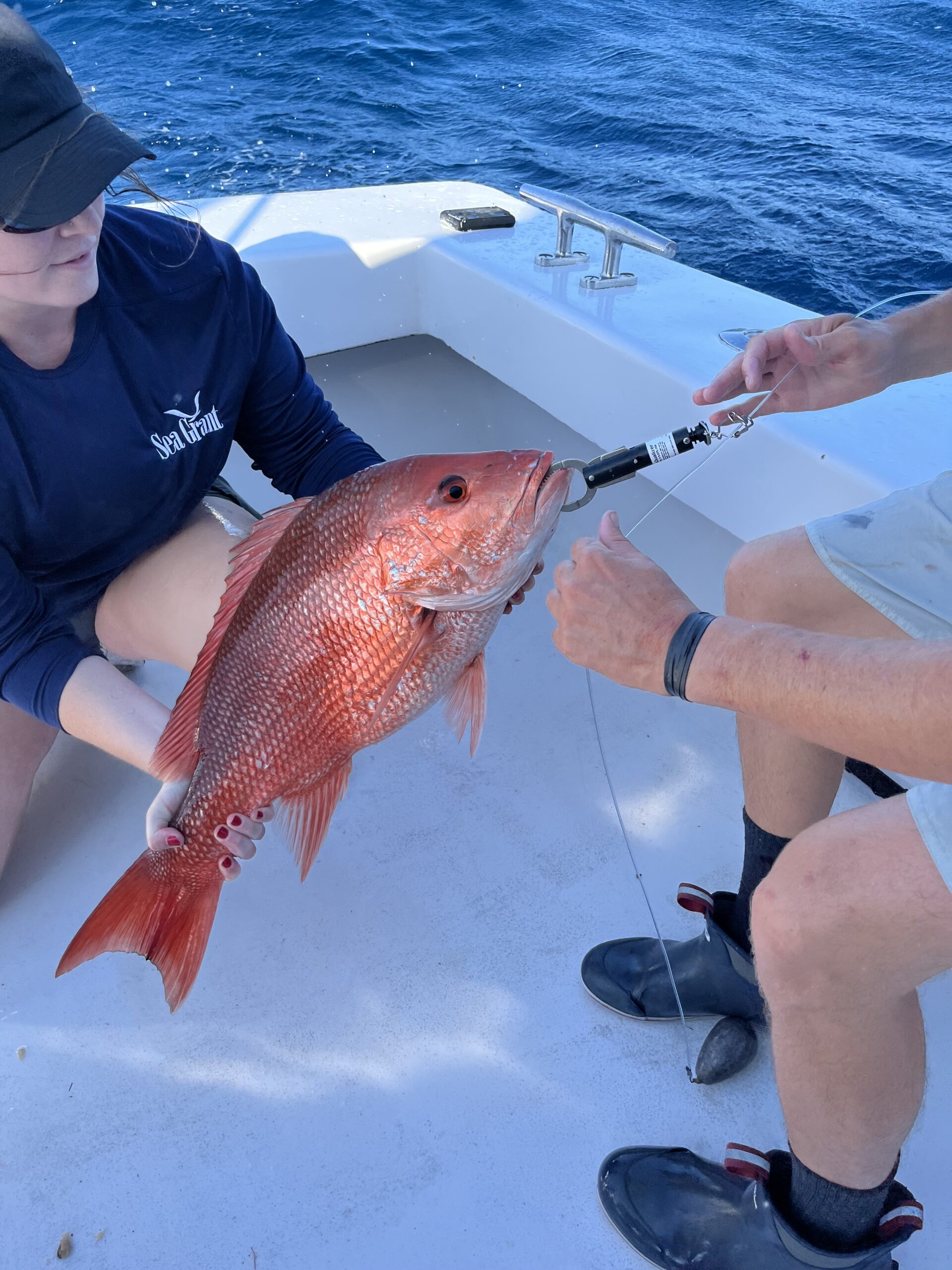 A few hours later and twenty miles offshore, Oliver and Withers are hooked up on a couple of large red snapper. They furiously reel each fish up from the depths while fighting to keep their balance on the slick, rocking deck of the Good Times. When the fish are brought aboard, Oliver and Withers quickly dehook, measure, and release them with the aid of a descending device, a newly required piece of fishing gear in the South Atlantic — and the catalyst for their trip.

Oliver and Withers both work for the South Atlantic Fishery Management Council (SAFMC) and are traveling along the Carolina, Georgia, and Florida coasts to talk with anglers about best catch and release fishing practices.

“With more people moving to the coast and fishing the coastal waters, more fish are being caught and released,” says Oliver, a communication fellow with the South Atlantic Sea Grants and SAFMC.

While releasing fish can help conserve their populations, there is more to it than simply tossing them back in the water.  The process of capturing and handling fish can result in injuries or death which presents a major conservation issue for some fisheries. The cumulative effects from catch and release can greatly impact overall populations.

“What we’re really trying to do is reduce the number of potential dead fish through education,” Oliver says.

Watch a red grouper with barotrauma recompress as a SeaQualizer descender device returns the fish to its original depth. Credit Brendan J. Runde.

Many reef fishes targeted by anglers — like red snapper — are found at depths greater than 50 feet. The sudden change in pressure from pulling up one of these fish can cause the gasses in its body to expand, resulting in “barotrauma.” 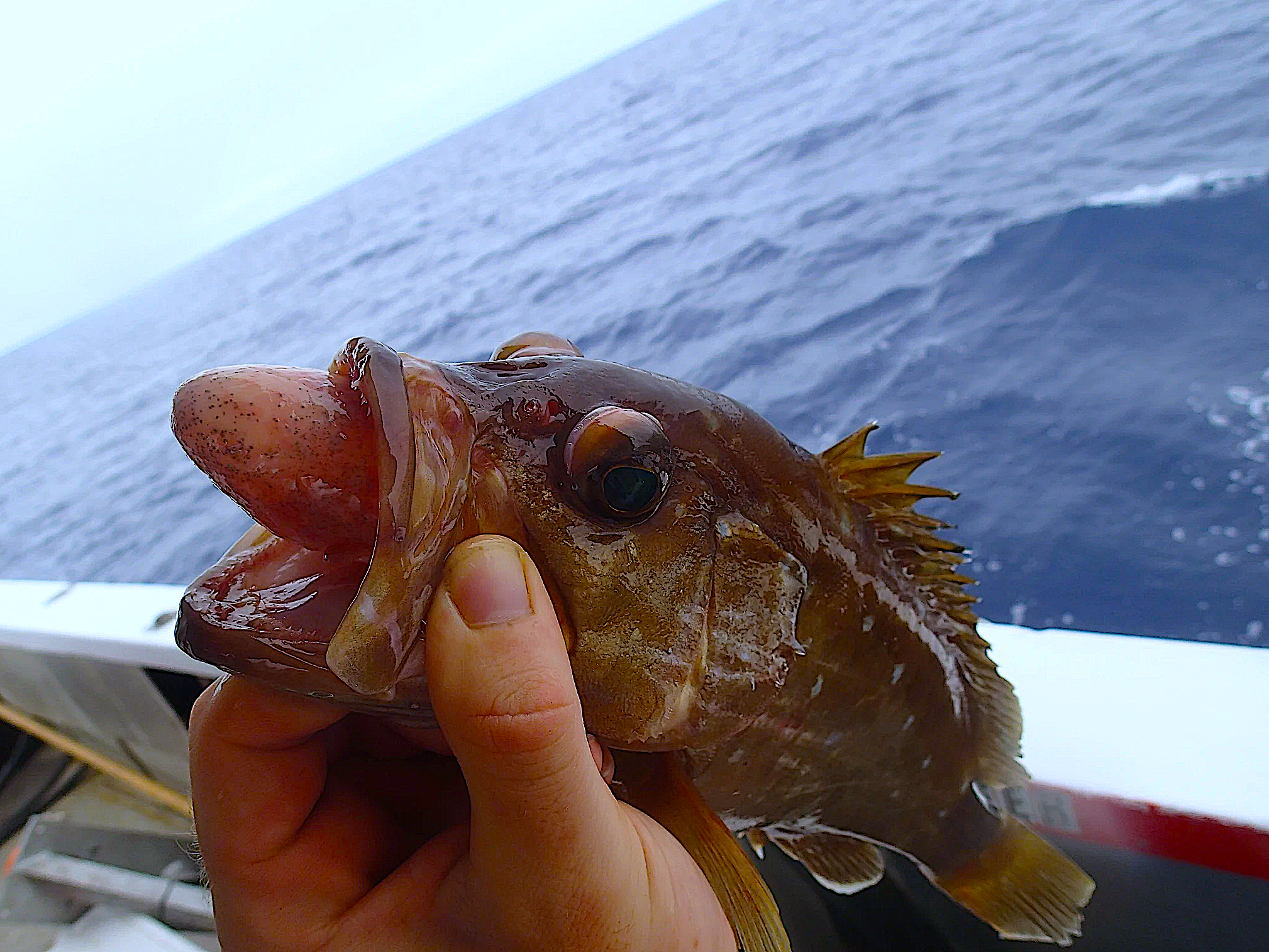 A fish in this condition is easy to identify by its protruding stomach, bulging eyes, bloated belly, and sluggish swimming. When released, these fish cannot swim down to their original depth and often float at the surface, where they make an easy meal for sharks and other opportunistic predators.

Fortunately, anglers can use descending devices to return fish back to their original depths, where the increased water pressure will recompress them, significantly increasing their chances of survival after release.

As of July 2020, any recreational angler, commercial angler, or charter boat must have a descending device on board and readily available when fishing for snapper-grouper species. The device must also be attached to a minimum of 16 ounces of weight and a minimum of 60 feet of line. This regulation covers federal waters off the coasts of North Carolina, South Carolina, Georgia, and east Florida to Key West.

All along the Southeast coast, Oliver and Withers use descending devices while fishing with local anglers and media, working with charter captains — like Piland of the Good Times — as ambassadors for safe release. They also visit small tackle shops and other venues to provide information and get feedback.

How to use a Seaqualizer descending device:

Support From All Sides

Anglers themselves were the first to advocate for descending device regulations in the U.S. South Atlantic.

Christina Wiegand, a fisheries social scientist at SAFMC, says the council hears a lot from fishers who get frustrated with “regulatory discards” — mandated catch and release fish. “They don’t like to see fish that float off dead.”

“Discard mortality from hook and line release is one of the primary management concerns for snapper-grouper species,” says McLean Seward, a fisheries biologist with the North Carolina Division of Marine Fisheries. “The use of descending devices and proper fish handling techniques is important to reduce post-release mortality and ensure the sustainability of these species.”

SAFMC first started discussing whether to propose a rule requiring descending devices on board vessels back in 2018. Similar rules have seen success elsewhere, notably Oregon’s halibut fishery and Washington state’s rockfish fishery. So much success, in fact, that it has reached a point where anglers have started to enforce one another.

Wiegand recalls spending a lot of time speaking with law enforcement, particularly in Washington state, getting their input on the proposed South Atlantic rules. “SAFMC really wanted to make sure that fishers had the freedom to use a device that was going to work for them while ensuring that it was effective at sending a fish down and improving survivorship,” she says.

Devices can vary in cost and technology, from expensive commercial models that can be programmed to release a fish at a desired depth, to a simple weighted milk crate.

Seward explains that for some anglers it is harder to convince them of the importance of using descending devices for smaller fish, but that others have been using them even before the regulation came into effect. “I spoke to one fisherman who reached out to make sure the old homemade device that he has been using — a weighted inverted hook — fit the description of a descending device,” he says. Seward added the angler is also part of a fishing club where he has been actively encouraging others to use descending devices.

“It was easily one of the most supported efforts I’ve seen in the decade that I’ve been involved in fisheries management,” says Wiegand. “Usually, regulations can be pretty controversial. It’s hard to get all fishers on board. But we really saw a lot of positive reaction when we were going to put this regulation in place.”

How to use a Shelton fish descender:

Boots on the Ground

When much of the world ground to a halt during the pandemic, outdoor activities remained a popular means of social distancing for many. In fact, recreational fishing saw a noticeable uptick — about one extra fishing trip per five anglers  — in Spring 2020 alone.

A multitude of tackle shops dot the Carolina coastline from Carova to Sunset Beach. The mostly mom-and-pop businesses cater to the local anglers and weekend warriors. Oliver and Withers were surprised to discover that very few of these shops carry or even know what descending devices are.

“A lot of people know about barotrauma: the bulging eyes, the stomach coming out of the mouth, fish floating off — but not descending devices,” Oliver says.

Their initial observations from the Outer Banks seemed to indicate some North Carolina anglers were unaware of the new rules. 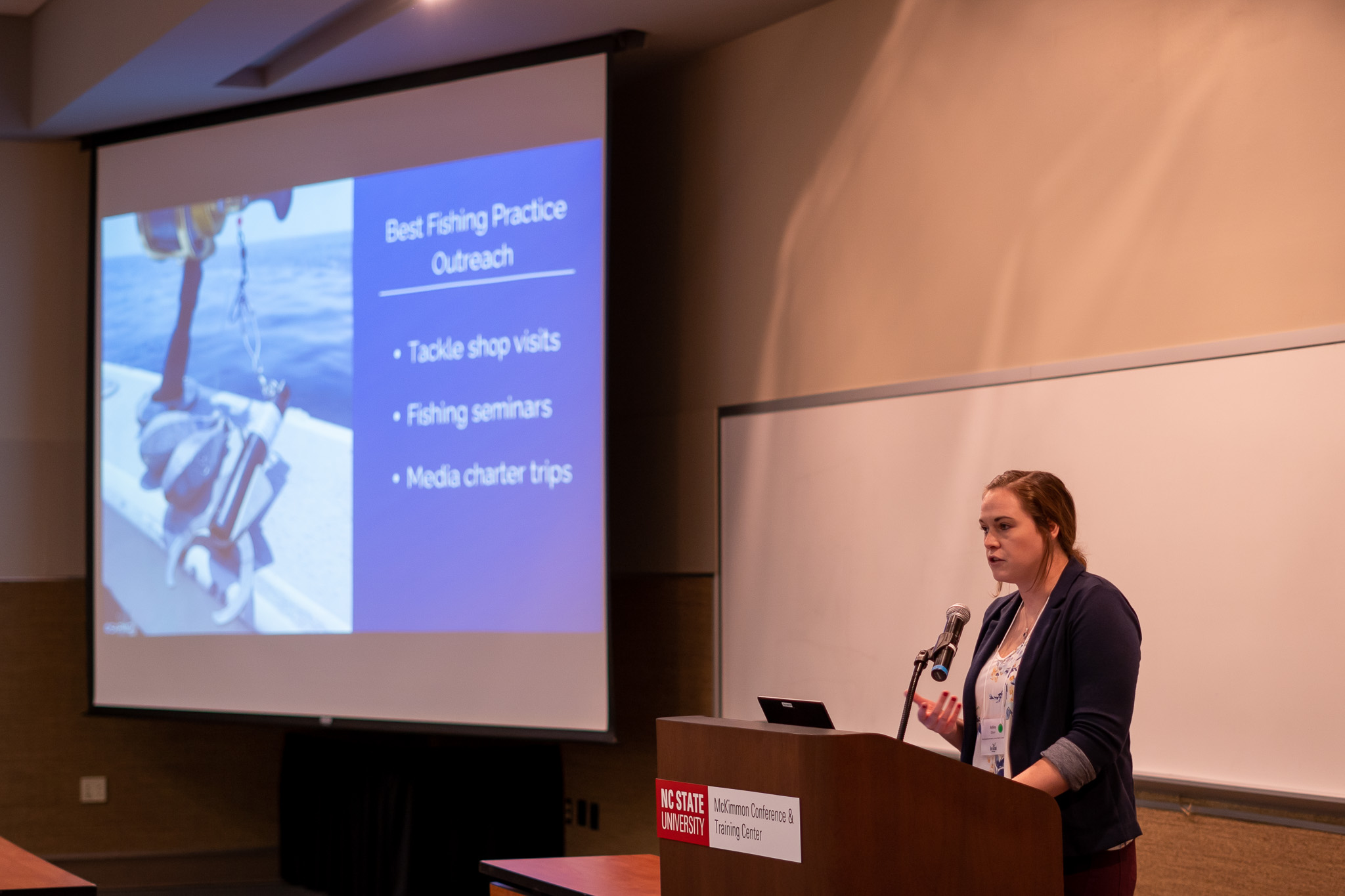 “The South Atlantic’s descending device regulation went into effect in the middle of COVID and so a lot of the outreach we did was virtual,” explains Julia Byrd, the citizen science program manager at SAFMC.

“It is very exciting to have Ashley and Meg on board because they’re able to get out there and visit tackle shops, give presentations, and go to the captains,” Byrd says. “It is an important part of the outreach that we haven’t been able to do over the past couple of years.”

“These interactions are a great opportunity even if someone does have concerns about a particular species, such as red snapper,” says Withers. “By speaking with us, fishers get a sense of who the Council is, how they can ask questions, where they can make a public comment, and how they can get involved. So even those interactions may feel a little bit more stressful, they’re just as — if not more — valuable.”

How to use a milk crate as a descending device:

The SciFish app through SAFMC’s Release project is a valuable opportunity for anglers to share what they see on the water. If they disagree with the data used to make decisions, this is one way that they can contribute to the process.

Withers is encouraging commercial, for-hire, and recreational anglers to download the app and submit release information, such as fish length, depth, type of hook and placement, shark depredation, and whether they used a descending device. 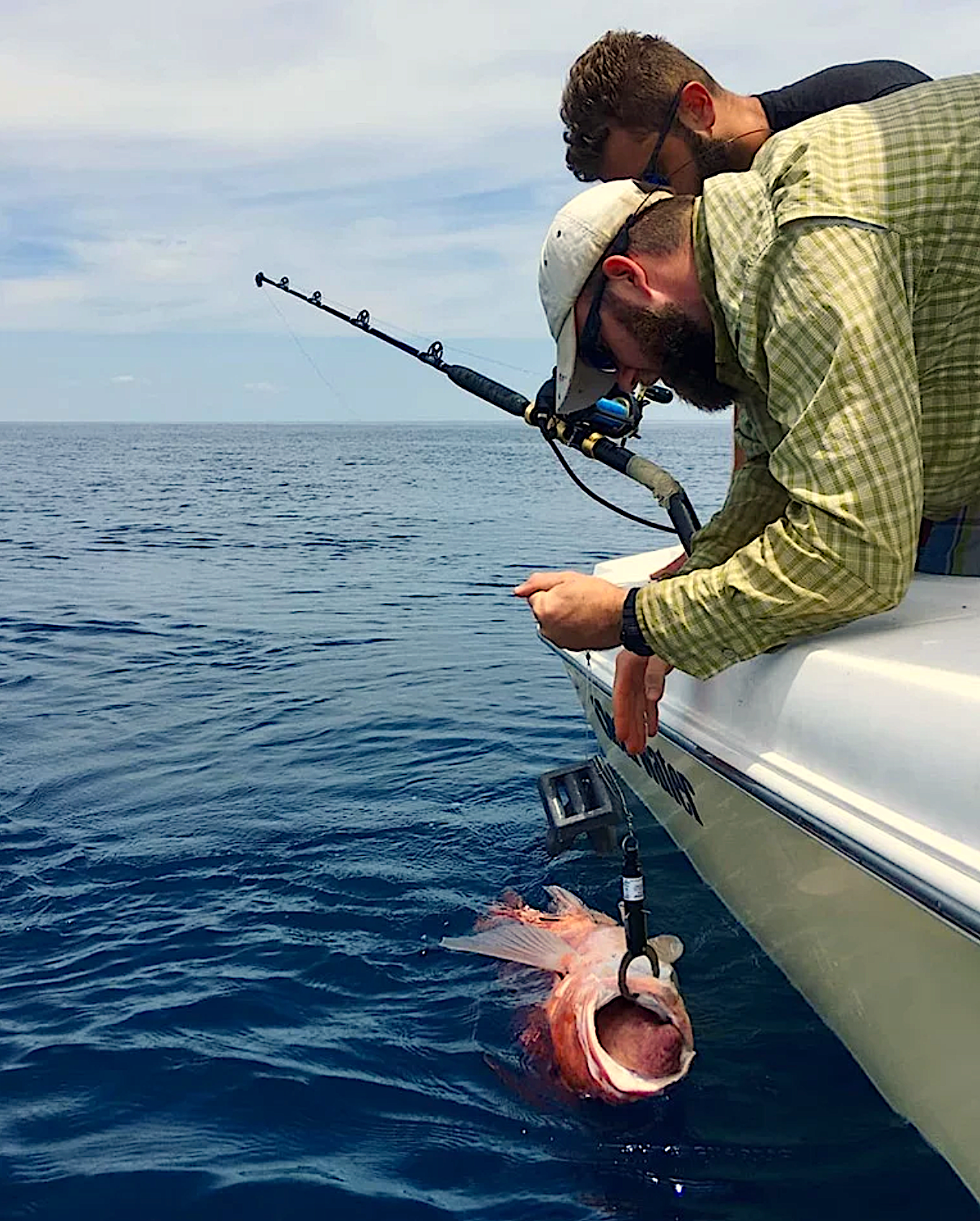 “This information is really valuable because it helps us to better estimate the age and survivorship of those released fish, and, in particular, to get a sense of how many people are using descending devices and how often,” Withers says.

SAFMC is also collecting data on where people learn about the SciFish app to understand how information spreads within the fishing community and to evaluate outreach strategies moving forward.

SAFMC already has learned that partnering with leaders in the fishing community is crucial for broader public adoption of best fishing practices. If the message is coming from well-respected anglers, rather than a governmental agency, it likely will spread further and find greater acceptance.

Withers and Oliver say they are beginning to see their hard work pay off. The SAFMC Release project is gaining momentum, and more anglers are signing up and submitting their catch and release information. In addition, by combining the outreach efforts and scope of the best fishing practices campaign with the Release project, they can now track if anglers report using descending devices.

The benefits of best fishing practices have convinced other areas around the country to implement their own descending device regulations. Earlier this year, NOAA enacted the similar DESCEND Act (Direct Enhancement of Snapper Conservation and the Economy through Novel Devices Act) for the Gulf of Mexico, which requires persons on commercial, for-hire, and private recreational vessels to have a venting tool or descending device rigged and ready to use when fishing for reef fish species.

If history is any indicator, the value of in-person interactions will be crucial there as well.

Oliver recalls one conversation with an Outer Banks angler that stood out to her in particular: “It’s good to see they [government agencies] are sending people out to our tackle shops. This is what we want – we want to talk to people face to face.”

Lead image: a graysby grouper about to be released with the aid of a descending device. Credit SAFMC.