Recreational Fishing (and Other Fun)

Our state ranks first among Atlantic states for the number of people who fish recreationally in saltwater off the East Coast. We’ve gathered our favorite articles on fishing below, and you also can read about boating, beach combing, crabbing, and other fun.

Hook, Line, & Science
Shark Thievery, American Shad in the Albemarle Sound, and How We Fished 12,000 Years Ago
in the Summer 2022 issue
A new study reveals that avid anglers are no strangers to opportunistic sharks — and this could impact shark conservation.

Hook, Line, & Science
Deepwater Fish and Shipwrecks, Lionfish DNA, and Ancient Sheepshead Bones
in the Spring 2022 issue
Video and laser imaging identified fish by species — and revealed where on shipwrecks fish like to hang out.

Fishing for Food and Finding Connection
in the Spring 2022 issue
“Not everyone with a rod and reel is just fishing for fun. For some people, the stakes can be much higher.”

Hook, Line, & Science
Oyster Reefs, Self-Releasing Hooks, and theMysterious Wanderings of Southern Flounder
in the Fall 2021 issue
Southern flounder move offshore to spawn, but their migration patterns might be more mysterious than we thought.

The Anglers Who Are Best at What They Do — And More
in the Summer 2021 issue
In this study most anglers were locals, and most ended the day empty- handed.

Illegal Angling, Measuring the Megalodon, and More
in the Spring 2021 issue
Video footage revealed that illegal fishing occurred regularly within the areas under observation.

Sharks, Shrimp, and Computerized Fish IDs
in the Autumn 2020 issue
New regulations went into effect requiring use of a descending device in South Atlantic federal waters to help improve survival of released deepwater fish. But can shark appetites undermine this conservation strategy?

Blacktip Sharks, Historic Dock Photos, and Hand-Crank Electrofishing
in the Summer 2020 issue
For those who would rather not mess with catching a shark – and who would rather keep their bait – here are some factors that could influence the probability of encountering one.

The Surf Zone, Summer Spawning, and Seafood Sleuths
in the Spring 2020 issue 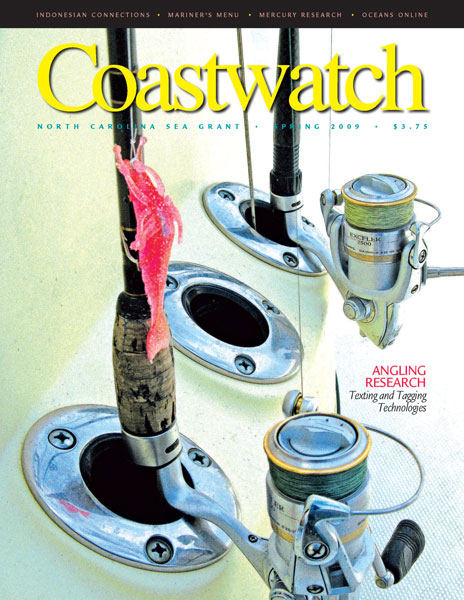 The Money, the Catch, and the Cape Fear
in the Winter 2019 issue

Life and Death for Dolphinfish, Roaming Red Drum,
Triggering Triggerfish, and Summer Vacation for Striped Bass
in the Autumn 2019 issue

Tuna, Toadfish and More
in the Summer 2019 issue

Gone Crabbin’
in the Summer 2019 issue

Bundle Up and Explore: Coastal Winter Adventures
in the Winter 2018 issue

Gaining an Education on the Water: Appreciating the Forces of Nature
in the Holiday 2017 issue

Fishing for Feedback
in the Spring 2017 issue

Discover Innovative N.C. Tourism in ACCESS
in the Spring 2017 issue

Running with the Blues
in the Holiday 2016 issue

Business as Usual: Fishing for a Living
in the Winter 2015 issue

Fresh From the Farm
in the Winter 2015 issue

A Sturgeon Primer
in the Spring 2015 issue

Music in the Marsh: The Summer Soundscapes of the Rachel Carson Reserve
in the Summer 2015 issue

The Power of Observation
in the Autumn 2015 issue

In Their Own Words: Sea Grant Fellows Share Research Snapshots
in the Autumn 2015 issue

Building a Partnership for Success
in the Holiday 2015 issue

Does It Really Start at Home? How North Carolina Marine Habitats Influence Black Sea Bass Growth and Maturity
in the Holiday 2015 issue

Dog(Fish) Days of Winter
in the Holiday 2015 issue

Fishing for Funding
in the Holiday 2015 issue

Local Catch: Trapping and Tasting an Invader
in the Holiday 2015 issue

Local Catch: Traditional Working Boats of the Outer Banks
in the Winter 2013 issue

Save Fuel, Money: Running Your Boat by the Numbers
in the Summer 2013 issue

The Pamlico Sound: Fishing Gem of North Carolina
in the Summer 2012 issue

No Discharge Zone: Southeastern Waters Designated
in the Spring 2011 issue

Texting Your Catch: New Technology for Recreational Fishing Data
in the Spring 2009 issue

Mapping the Overlap: Terrapins and Crab Pots in the Lower Cape Fear Region
in the Summer 2009 issue

Finding Fish in Lots of Water
in the Winter 2008 issue

Picking up the Paddle: Fuel-Free Fishing in North Carolina
in the Holiday 2008 issue

The Red Drum:
First in Fish for NC Recreational Anglers
in the High Season 2000 issue