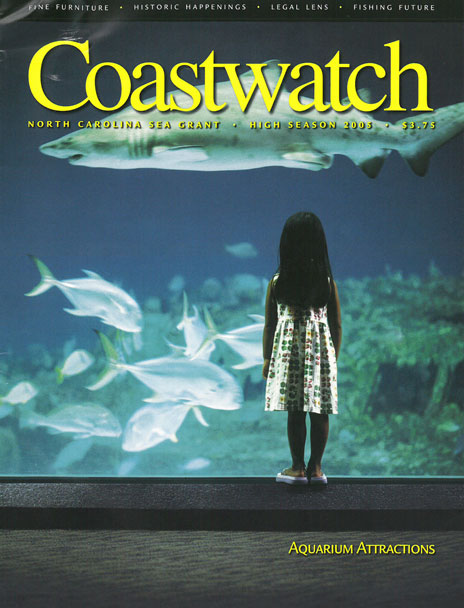 Shark Thievery, American Shad in the Albemarle Sound, and How We Fished 12,000 Years Ago
in the Summer 2022 issue
A new study reveals that avid anglers are no strangers to opportunistic sharks — and this could impact shark conservation.

Sea Science
Are Sharks Getting Smaller?
in the Spring 2022 issue
A combination of fewer and smaller sharks in the coastal ocean has likely contributed to shifts in ecosystems and fisheries that we don’t fully understand.

Sea Science
The Ever-Expanding Brains of Atlantic Sharpnose Sharks
in the Fall 2021 issue
This shark’s brain never stops growing throughout its entire life, especially the regions responsible for motor control and sense of smell.

Sharks, Shrimp, and Computerized Fish IDs
in the Autumn 2020 issue
New regulations went into effect requiring use of a descending device in South Atlantic federal waters to help improve survival of released deepwater fish. But can shark appetites undermine this conservation strategy?

Blacktip Sharks, Historic Dock Photos, and Hand-Crank Electrofishing
in the Summer 2020 issue
For those who would rather not mess with catching a shark – and who would rather keep their bait – here are some factors that could influence the probability of encountering one.

Shark Facts that Might Surprise You
in the Summer 2020 issue
The first sharks swam the ocean 455 million years ago — and 11 more interesting tidbits about the ancient species.

Welcome to the Neighborhood
in the Autumn 2018 issue

Animal Societies
in the Winter 2017 issue

Swimming with Sharks
in the Autumn 2015 issue

Dog(fish) Days of Winter
in the Holiday 2015 issue

Sharks of North Carolina
in the Spring 2014 issue

Shark Research in the Rulifson Lab
in the Winter 2014 issue

Undersea Exploration: Charting New Pathways to the Abyss
in the Spring 2013 issue

Fins to the Left, Fins to the Right: Netting Sharks to Snare Data for Fisheries Management
in the Spring 2011 issue

Listening to the Sea
in the Summer 2010 issue

Extreme Makeovers: Not Your Daddy’s Aquarium
in the High Season 2005 issue