As I drive east on Highway 58, the last landmark before the community of Goshen is the E. E. Bell farm. A long avenue of oaks and cedars veils an antebellum manor house with classical revival columns. Now on the National Register of Historic Places, the 2,000-acre cotton plantation once belonged to James C. Bryan, Jones County’s largest planter. The main house is best known for having a crystal chandelier that once hung in the Confederate White House in Richmond, Virginia. The farm’s cotton fields crowd Goshen against the Trent River and a little stream called Goshen Branch. 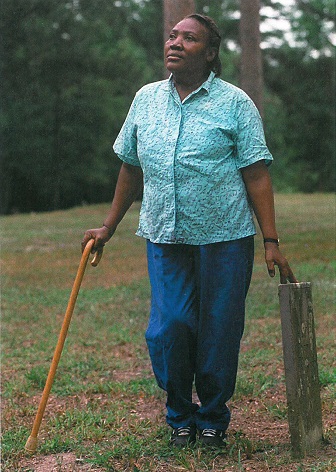 Hattie Brown learned Goshen history from her grandmother and is determined to keep the story alive. Photo courtesy of “The News and Observer”, Chris Seward.

People in Goshen invited me there as a historian because the town of Pollocksville, a mile east, intended to build its sewage-treatment plant in this African American farming community. The sewage plant would spray its sludge only a few feet away from the Goshen cemetery and would take some of the last black-owned farmland in Jones County. Goshen was also one of the black communities settled immediately after the Civil War. The more famous town of Princeville, 70 miles north of Goshen, was the first incorporated African American town in the United States, but Goshen and a number of other, mostly disappearing rural black communities, were founded in the same time period. Goshen’s residents believed their community deserved historic recognition and saw the building of the sewage plant as “an act of desecration,” as one lady there told me. They also feared that the waste odors and runoff would pollute their forests and streams.

When I travel through the small towns and remote byways of tidewater North Carolina, I see a growing number of commu­nities like Goshen that seem to be in the way of “progress.” As more and more people move to the Carolina coast, and as growing numbers of tourists visit our beaches, many older, usually poor communities are threatened by the construction of sewage plants, highways, bridges, and waste-disposal sites. No place seems sacred. And to me, as a historian, many of these developments seem bent on erasing the past.

Goshen citizens hoped that if could help them document the historical significance of their community, they might be able to pressure Pollocksville’s leaders into not building the sewage plant there. I knew this would not be easy.

When I drove the dirt road to pick up Hattie Brown at her farmhouse, I already knew that finding historical documents on the African American past was exceedingly difficult.

On my way to Goshen, I had stopped at the North Carolina State Archives in Raleigh to search for written records on the community’s past. I had also paused to ransack the Jones County Courthouse in Trenton. I had found a few relevant deeds, an old list of local slaves, and a few other documents, but not much. I had no idea how much I would learn in Goshen — not just about coastal history, but about the meaning of history and what is worth preserving.

In a pine grove by the branch, Hattie Brown and I walked among Goshen’s dead. A soft-spoken 67-year-old, she recalled all the departed, whether buried in unmarked graves or under marble headstones. She had at least a few words for every soul. I listened while she wove together the threads of Goshen’s past for me.

Hattie Brown learned Goshen’s history from her grandmother Luvenia Smith Loftin. A midwife and lay doctor, Luvenia forbade her descendants to forget Goshen’ s past. What Hattie Brown told me, Luvenia had taught her.

Born a slave in 1848, Luvenia grew up on Richard Oldfield’s plantation on the White Oak River, about IO miles south of Goshen. Her father, Luke Smith, rebelled against the wealthy cotton planter. He secretly gardened in the nearby woods. He taught Luvenia to read by slipping books from Oldfield’s library. He led clandestine prayer meetings. He also ran away many times. Luvenia saw him maimed with a bullwhip yet still disappear back into the woods.

In 1863, after Union troops drove Confederate forces out of most coastal towns, Luke Smith and his wife, Melissa, led their children to freedom. To reach Union-occupied New Bern, they crossed two rivers and the Lakes Pocosin — now part of Croatan National Forest. It was a wilderness crawling with cottonmouths and alligators. Fourteen-­year-old Luvenia barely kept up and nearly drowned fording the Trent River.

Luvenia later married William Loftin, a former slave from Lenoir County. They sharecropped at first. But in the 1870s, they joined the Jordans, the Bests, and other Loftins in purchasing a remote, swampy woodland called ”the Goshen tract.” Wild plums, not pines, shaded the graveyard in those days. 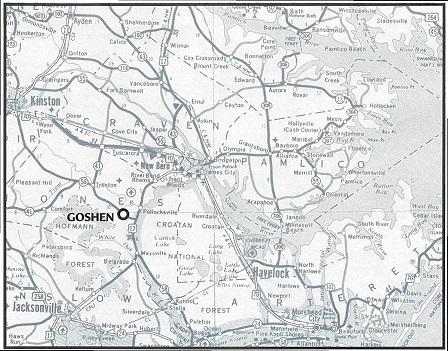 Together, the families cleared the land by hand, grubbing enough earth for cotton, corn, and sweet potato fields. They raised hogs. They mortgaged everything to buy seed and a mule. A single crop failure could have left them homeless.

Amid that racial strife, Goshen was a rare sanctuary. Reached only by an old Indian trail, the community was very secluded. Luvenia freely roamed the forest for her herbal cures. The children played without inhibition. And at Christmas, the people wandered by every home to share good food and glad tidings. Everybody knew everybody, and the community looked out for its own. Only when walking past Pollocksville to the Garnett Heights school did Goshen’s children suffer racial taunts.

After Luvenia Loftin’ s death in 1941, her descendants snuggled to hold on to Goshen. Like all small farmers, they suffered from bad weather, feeble mules, and low prices. But Jim Crow also prohibited them from challenging corrupt merchants and produce buyers. And the county sheriff showed little mercy to black farmers delinquent in their tax payments. Hattie Brown remembered all too well when her cousin Laura’s family was dispossessed; the family stayed for years in a drafty tobacco barn, and Laura soon died of pneumonia.

We walked past small plastic signs marking the evicted family’s graves. “They lived with so many heartaches,” Hattie Brown sighed.

To hold on to the land, Goshen’s citizens also held jobs away from the farm. The men traveled to distant sawmills and logging jobs. The women and children picked tobacco on farms owned by white families. In spring, they harvested strawberries a hundred miles away and rushed home on weekends to tend their own farms.

Holding a family together was a feat. For years after their father died, Hattie Brown and her sister Minzelle Dillahunt ran the Loftin farm by themselves. They plowed fields and fought off merchants who tried to take advantage of two women doing “men’s work.” Their brothers, Lucius Jr. and William, staved off foreclosure by sending military paychecks home. Sister Leora Murray, a Philadelphia nurse, helped out when she could.

Black-owned farmland dwindled away elsewhere in Jones County, and indeed throughout the coastal plain. When blacktop replaced the Indian trail in 1952, Goshen’s citizens began to commute to domestic and factory jobs in other counties; Jones County itself never offered more than farm work, except for little cut-and-sew factories that went in and out of business every few years. Hattie Brown’s cousin Julia was like many. For decades, she cooked for a white family in Kinston, 20 miles away. She came home only on weekends, but she kept her land in Goshen nonetheless.

Then the drowning of Minzelle’s young son in 1956, followed by a great flood in 1957, nearly shattered the community.

Yet Goshen has somehow survived. Today, African Americans comprise 43 percent of Jones County’s population, yet they own less than 3 percent of the land. More than half the county’s farmers —landowners, tenants, and sharecroppers — were African Americans two generations ago. Now, only a handful of black farmers till the land, and most only raise a few hogs or tend a few acres.

In Jones County, as in many parts of eastern North Carolina, landlessness has led to widespread poverty and hopelessness. Hordes of other black farm people have moved to cities. In the old days, they moved to Brooklyn, New Jersey and Baltimore. Nowadays, they usually do not have to go as far to find opportunity, but the result is the same back home: rural churches with dwindling congregations, elderly people living alone, high rates of alcohol and drug abuse.

But in Goshen, land ownership has meant independence, strong roots, and an enduring closeness to the soil. Hattie Brown can look out her home’s windows across cornfields and collard patches that have been in her family for generations. She can see the homes of nieces and nephews, brothers and cousins on the far side of those fields. And thanks to Goshen’s deep roots, the children who leave home often do well. Goshen boasts teachers, lawyers, engineers, and scientists among its children. One of Hattie Brown’s nieces I later met is Professor Elvira Williams, who teaches at North Carolina Agricultural and Technical State University in Greensboro. Professor Williams was one of the first African American physicists in the country.

All of this made me ponder the meaning of history and what merits historic recognition. As I got to know Goshen the day when Hattie Brown and I strolled through the cemetery and during later visits, I noticed that young Goshenites have been coming home more often recently. They have returned to join the struggle to save the community and preserve its cemetery and farmland. None of the old homes and local landmarks in Goshen are the sort that will be given protected status by the National Register for Historic Places, like the E. E. Bell farm up the road and the old Foscue Plantation house across the Trent River.

These young people in Goshen seem to know — or at least to intuit, as I did that autumn afternoon in Goshen’ s cemetery — that the real meaning of history has little to do with antique chandeliers and Doric columns. Hattie Brown and her neighbors taught me that other things are far more important: the collective experiences of a community and the stories passed from generation to generation by women like Luvenia Loftin and Hattie Brown.

Included in A Historian’s Coast Adventures into the Tidewater Past, by David Cecelski; John F. Blair, publisher.

This article was published in the Holiday 2000 issue of Coastwatch.