Four, one-second flashes of light every 10 seconds at Latitude: 33.8939 North, Longitude: 78.0351 West. By sea, that’s the visual and global “address” of the Oak Island Lighthouse.

The beacon, a welcome sight on a stormy night, is visible for 24 nautical miles. For half a century, its steady signal has warned mariners approaching the treacherous Frying Pan Shoals — where the Cape Fear River meets the Atlantic Ocean.

Landlubbers easily spot the landmark towering above Caswell Beach Road near the tip of the barrier island. And, thanks to the Town of Caswell Beach and Friends of Oak Island Lighthouse (FOIL), visitors now enjoy a close-up view of the maritime icon.

Until recently, a chain link fence kept people at a distance from the state’s youngest lighthouse, which was completed by the U.S. Coast Guard in 1958. Public access is a new chapter in the history of the Oak Island Lighthouse, explains Max Williams, who chairs the FOIL board of directors.

The groundwork for change was laid in 2004 when the National Park Service, within the U.S. Department of the Interior, donated the lighthouse tract to the Town of Caswell Beach for public recreational use through the Federal Lands to Parks Program. According to the agreement, the U.S. Coast Guard continues ownership and maintenance of the lantern house, with its double bank of flashing lamps.

The lands-to-parks tract includes the one-third acre lighthouse parcel that is adjacent to the U.S. Coast Guard Life Boat Station — and the historically linked, five-plus acres of undeveloped oceanfront land directly across the street.

As Caswell Beach Mayor Harry Simmons puts it, “It was an offer no one could refuse. When the feds made the land available, the town was ready with an application and a plan. The lighthouse is a national treasure. And, five acres of oceanfront land with a pristine dune system is hard to come by these days. This is a chance for the town and its citizens to control the destiny of this valuable land.”

But acquisition of the land raised concerns about potential degradation and erosion that could result from increased public access. Happily, Simmons says, FOIL is partnering with the town to preserve and develop the lighthouse properties — and raise funds to help implement important environmental enhancements.

“We want to share this treasure with the public in a way that balances access with stewardship,” Williams says. 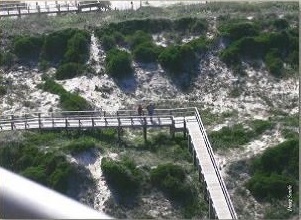 Protecting the beachfront dunes from foot traffic was addressed early on. An accessible boardwalk rises above the dunes from the park entrance to the ocean beach. Observation decks along the ramp enable visitors to snap photos of the lighthouse or capture stunning views of the dune, beach and ocean.

At the lighthouse, temporary measures are in place. An erosion-control mat made of woven jute helps protect the dune from foot traffic. Gravel covers an interim parking area.

On the drawing board, though, is an impressive landscaping plan based on the site’s biological history, says landscape architect Heather Burkert. Restoring the original dune ecology includes planting native species such as beach grasses, yucca, yaupon holly, live oak and myrtle. Apply what works best in nature, Burkert says.

Her low-impact design also includes raised boardwalks and gathering areas to protect the dunes, permeable parking areas and walkways to absorb stormwater, and bioretention ponds to catch and filter runoff.

Butch Shirkey, newly elected town commissioner, believes the project is doubly important: First, it will protect the water quality surrounding the lighthouse. Second, it will be a demonstration project for coastal residents. ”We live in an incredibly environmentally sensitive area. We can show how to do something that is both aesthetically beautiful and eco­friendly.”

Burkert’s site plan, which was approved by the town commissioners, is consistent with the town’s stormwater management plan that seeks to … positively impact stormwater quantity and runoff without negatively impacting critical water quality.

FOIL has launched a major effort to raise the estimated $100,000 needed to fully implement the landscape project, Williams says. FOIL’s first event brought in about $10,000, and members plan to seek donations and grants to help raise the balance. 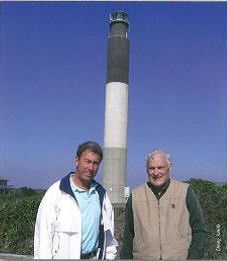 Meanwhile, the chain link fence surrounding the lighthouse came down in 2007, and a cadre of FOIL volunteers began leading twice-weekly lighthouse tours. From Memorial Day through Labor Day, more than 3,500 guests were guided to the second landing and window overlooking the island.

A stalwart few climbed 131 steps to the ultimate reward — a breathtaking view from the observation gallery near the lighthouse top — more than 150 feet above the water, says Bob Ahlers, FOIL tour coordinator.

Ahlers recalls recently escorting an 80-something woman to the top. “She took her time, rested at each landing, and was determined to make it,” he recalls. “It’s a real challenge.”

He has lost count of how many times he has made the ascent. One thing is certain, though, he never tires of the view — a sentiment shared by the 28 volunteers who guide visitors.

“Our volunteers come from all across Brunswick County and many are transplants,” says Ahlers, a mid-westerner who relocated to Caswell Beach by way of Long Island. “We have a common sense of pride in this important part of history.”

A Place in History 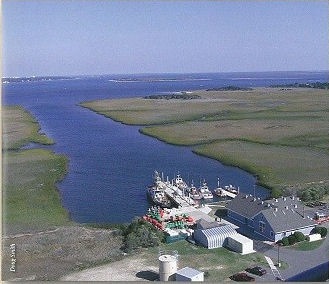 The lighthouse sits on land that has been in use as a U.S. Coast Guard Station since the 1920s. From 1888 until that time, it was a U.S. Lifesaving Station. Before that, the land was part of Fort Caswell, built in 1827 to protect ships in the region from pirate attacks.

Though it is the first lighthouse to be built on Oak Island, it is the fourth to mark the entrance to the Cape Fear River. Its predecessors sat on Bald Head Island, the first built in 1794, followed by Old Baldy in 1817. Later, the Cape Fear Light, activated in 1903, was manned by Capt. Charles Swann for decades. The legendary “Capt. Charley” threw the switch to activate the automated Oak Island Lighthouse in 1958.

Surprisingly, Oak Island was chosen as the site for this fully automated lighthouse because Bald Head Island had no electricity until 1978!

At the time it was commissioned, the Oak Island Lighthouse was the second brightest in the world and the brightest on the Atlantic Coast — a distinction now held by the Sullivan Island Light near Charleston, S.C., which was constructed in 1962.

Unlike most historic beacons, the Oak Island Lighthouse has no spiral staircase. Instead, steel ships’ ladders switch back and forth to eight platforms, Ahlers notes. An electric tool lift rises up the center to the top for transporting maintenance equipment. 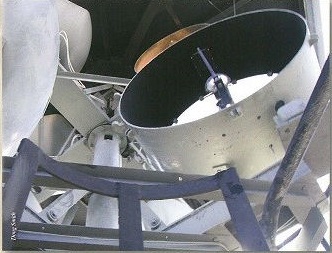 An up-close view of the lighthouse lamps is the reward for climbing to the top. Photo by Doug Smith.

The unique three-colored, stripe pattern never has to be repainted. The pigment was mixed into the concrete during construction.

“In a hurricane, this is the place to be,” Ahlers says of the lighthouse’s storm resistance. “It will be here for a long, long time.”

The Oak Island Lighthouse may not have the architectural character of Old Baldy, but it is a unique structure that is steeped in the maritime history of the region, says Williams, a retired Western Carolina University history professor.

Mayor Simmons agrees the lighthouse is a regional and national icon. “With modem GPS navigational systems of today, a lighthouse may seem unimportant,” he says. “But when boaters see that light flashing from all those miles at sea, they know they are headed in the right direction. There is something to be said for knowing that something is out there. And, we are going to do our best to maintain it.”

The lighthouse tours are conducted for those age 7 and older to the second level on Wednesdays and Saturdays from Memorial Day through Labor Day Tours to the top are offered year-round by request for those age 10 and older. All tours are free of charge. For additional irifom1ation about Oak Island Lighthouse or Friends of the Oak lsland Lighthouse, go to www.oakislandlighthouse.org, or call Max Williams, 910/278-6569.

This article was published in the Winter 2008  issue of Coastwatch.