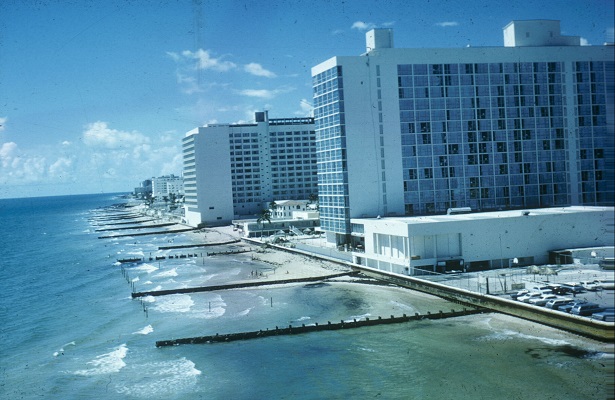 Groins, such as those on this Miami Beach, are designed to trap sand that flows along with ocean currents. Photo by Spencer Rogers.

A recent report, Developing a Management Strategy for North Carolina’s Coastal Ocean, provides an in-depth exploration of emerging ocean resources issues facing North Carolina and the adequacy of the state’s existing ocean policies. The release of this state-level study is timely and particulary relevant in the wake of President Obama’s June 2009 memorandum, which established a temporary interagency Ocean Policy Task Force at the federal level.

The 2009 North Carolina report stemmed from the 2003 and 2004 publications of the Pew Oceans Commission and U.S. Commission on Ocean Policy that encouraged the nation to take a fresh look at ocean resource issues. Developing a Management Strategy for North Carolina’s Coastal Ocean was created through a two-year partnership that included the N.C. Division of Coastal Management (DCM), North Carolina Sea Grant and the N.C. Coastal Resources Law, Planning and Policy Center. For the study, a 14-member Ocean Policy Steering Committee (OPSC) was convened to review current research and develop policy recommendations for each emerging issue for the final report, which was submitted to the Coastal Resources Commission (CRC). The report covers the state’s coastal ocean waters and adjacent federal waters only — the estuarine shoreline was not a part of the study. 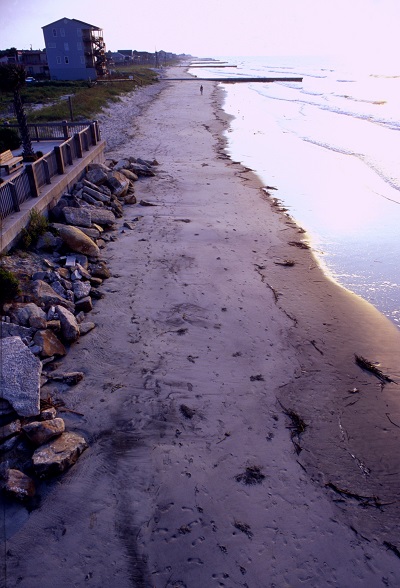 North Carolina has a statutory ban on most hardened structures. Photo by NOAA.

Sand resource management is the first chapter in the report and was a major focus of the study. Due to the current statutory ban on most hardened structures along the coast, North Carolina emphasizes beach nourishment to address erosion. Sand resources are limited, but demand for beach-quality sand continues to grow for many reasons, such as chronic long-term erosion, sea level rise adaptation approaches and natural hazards protection purposes.

To date, sand supplies have been adequate to fulfill the needs of North Carolina’s beach communities. However, given that there likely will be an increasing need for beach nourishment, the OPSC developed a set of recommendations to address the issue.

In a related action and after the final report was submitted to the CRC, the General Assembly directed the CRC to conduct a study of the desirability and feasibility of terminal groins — structures made of stone, sheet pilings or other materials that are placed perpendicular to the shoreline. Groins trap sand as it is transported along the shoreline by wave-induced currents. Terminal groins are typically single structures near the end of a sand transport system, usually an inlet, such as those found at Fort Macon and Oregon Inlet.

The results of the terminal groin study — expected in April 2010 — and any subsequent change in state laws or regulations may impact the policy recommendations.

Wind energy dominated discussion of this topic. A gap exists in North Carolina’s laws and regulations regarding wind energy development in the state’s coastal waters. It is unclear what the environmental review and permitting process would be, or which state agency would take the lead, should a wind energy project be proposed.

An attempt to address these legal issues was made during the 2009 Regular Session.

Senate Bill 1068 addressed some of the legal and regulatory barriers discussed in this chapter, including assigning jurisdiction to the CRC for wind energy projects in coastal counties and in coastal waters. The bill was not enacted into law, but it could be reconsidered during the 2010 short session.

In addition, in 2009, the General Assembly approved a wind energy demonstration project of up to three turbines in the waters of Pamlico Sound. Although the project is for estuarine waters rather than coastal ocean waters, it nevertheless represents a step forward in the further study of technical and economic issues associated with wind energy development. The demonstration project is a partnership between UNC Chapel Hill and Duke Energy.

Ocean outfalls are pipelines that extend into coastal and ocean waters and discharge effluent from municipal wastewater treatment facilities or stormwater runoff. The OPSC supports the recommendation included in the Coastal Habitat Protection Plan that no new or expanded ocean outfalls should be created, whether the outfalls are for wastewater or for stormwater.

The rationale for this recommendation included the high cost of reaching deep water, the need to monitor the public perception of outfalls near swimming areas, and the risk of spills caused by damage to infrastructure in exposed habitats. Due to increased development along the coast and the forecasted need for increasing freshwater supplies, an additional recommendation was for North Carolina to research the potential for alternative water treatment methods, such as water reclamation and reuse facilities.

The OPSC recommended that the state conduct a technical assessment to research the feasibility of marine aquaculture in its coastal ocean waters. Aquaculture operations in ocean waters requires certain water depth, and North Carolina’s coastal waters may not be deep enough. Finding sufficient water depth may require going out 15 miles or more from the coast, which constitutes federal waters. Furthermore, a more ideal location would need to be where wave action is not too strong and offers some protection from tropical systems.

It is an open question as to whether North Carolina’s coastal ocean waters provide a suitable environment for marine aquaculture. Another issue could arise if Congress passed a national offshore aquaculture bill. Should North Carolina amend the policies in its coastal management plan if Congress establishes a federal permitting program for aquaculture in federal waters? The OPSC also recommended that DCM continue to monitor the progress of the National Offshore Aquaculture Act of 2007, or similar future bill.

As North Carolina considers such issues as sand resource management, a beach and inlet management plan and alternative energy development in its sounds and coastal ocean waters, a comprehensive plan for managing uses in state waters would be beneficial.

Particularly given the General Assembly’s authorization in 2009 for a wind energy demonstration project in Pamlico Sound and the U.S. Minerals Management Service’s new regulations governing development of renewable energy and alternate uses on the Outer Continental Shelf, comprehensive ocean management could be a valuable tool for the state. Furthermore, ocean management and marine spatial planning are being explored in other coastal states, such as Massachusetts and Rhode Island.

After receiving the final report, the CRC established a subcommittee that will further consider the OPSC recommendations and suggest steps the full CRC might take to implement them. The members of the subcommittee are CRC commissioners Joan Weld, Lee Wynns, Bill Peele and David Webster; and Coastal Resources Advisory Council members Dara Royal, Spencer Rogers and Harry Simmons.

North Carolina’s efforts are in step with the federal interagency ocean policy task force created in 2009. Led by the chair of the federal Council on Environmental Quality, the goals of this task force are to recommend a national policy that ensures protection, maintenance and restoration of our oceans, coasts and the Great Lakes; suggest a framework for improved stewardship; and recommend a framework for coastal and marine spatial planning.

Although the shape of the national-level ocean policy has yet to be determined, the creation of this task force represents a positive shift for coastal management in general. For instance, the outcome of the task force’s recommendations may be able to assist North Carolina as it moves forward to address its state-specific concerns.

Following the public meetings, the final report was prepared and presented to the CRC at its June 2009 meeting. The CRC then established a subcommittee to review the recommendations and prioritize for potential implementation.

This article was published in the Winter 2010 issue of Coastwatch.