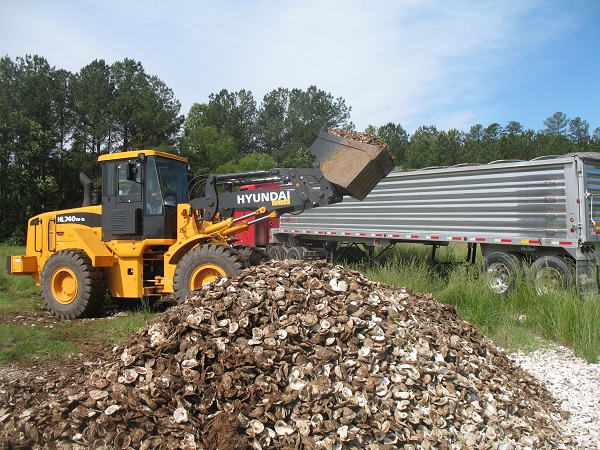 Oyster shells are set to dry in the sun before being placed in coastal waters to encourage new or expanded reefs.

Oysters are a traditional winter delicacy enjoyed at the coast and across the state. Every year, inland residents devour thousands of bushels of the tasty mollusk.

And many of those oyster fans are helping to replenish the fishery stocks through a shell recycling collaboration led by the N.C. Division of Marine Fisheries. In the past, empty shells would have gone to county landfills, but now they are going back into coastal waters, so new oysters can settle and grow.

“There are a lot of folks that eat oysters in inland areas — it’s not just a coastal thing,” says Sabrina Varnam, N.C. Oyster Shell Recycling Program coordinator. “The largest volume of shells is coming from inland restaurants,” she adds, citing Wake County as a leader.

When the program first started in 2003, the focus was on saving shells from oyster festivals and large-volume restaurants, Varnam says. “In 2004, the first public recycling sites were introduced and the shells collected increased with contributions from more restaurants and also the addition of a shucking house.”

By December 2009, the program had grown to include 115 public recycling sites and 59 restaurants, covering 22 counties, including Wake and Durham.

During the holiday season and winter months, the program still gets large contributions from festivals and oyster roasts.

“As soon as the temperature starts getting cooler, we see an increase in the number of oysters eaten and shells disposed,” Varnam notes. “More people enjoy eating oysters outside during the colder months.”

Over the years, oyster stocks have been depleted in the state’s coastal waters. Creating new oyster beds with recycled shells allows young oysters a better chance to develop and grow to maturity. 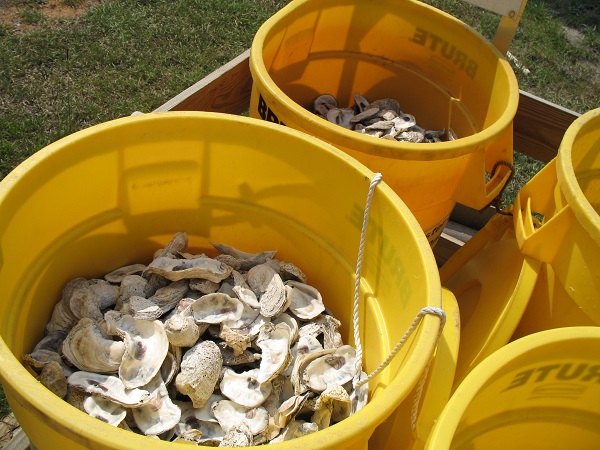 “The idea is to put shells back into the water to make up for those lost during oyster harvest.”

A 2007 statue passed by the N.C. General Assembly banning disposal of oyster shells in solid waste landfills has helped the shell recycling progarm to gain momentum by sparking participation from businesses and county officials. And those who donate shells may qualify for a state tax credit.

The main challenge for inland restaurants and residents has been developing a sanitary and cost-effective means by which to transport these shells to the coast, Varnam explains.

In 2009, Wake County added barrels at all the solid waste sites for individual residents, and officials are working with restaurants with large quantities of shells. “I think without Wake County coming on board, we would not have the others moving in that direction,” Varnam notes.

Lowell Shaw, solid waste facility manager for Wake County, said the new sites have been popular. “I have been looking at the pounds coming in from the 11 convenience centers, and I am pleased.”

Greg Overbeck, a Chapel Hill restaurant group co-owner and shell recycler, says his locations can produce more than 25 bushels a week during the winter months.

“This time of the year, we are selling more oysters,” he says, adding that he is optimistic that Orange County will soon offer shell recycling. The county is considering the request.

After establishing four recycling sites in June 2009, Ronda Carter, Durham litter control officer and recycling specialist, was unsure of the volume of shells to expect this winter.

“For us being so far inland, we weren’t sure how much traffic we would get at the new recycling sites,” Carter says. “It’s a wait-and-see type of thing. When the bins get full, I will transport them elsewhere.”

“By getting more shells, we are able to create more sites along the coast,” Varnam says. “There is no limit.”

To get an updated list of N.C. Oyster Shell Recycling Program sites, go online to: www.ncdmf.net/shellfish/recycle1.htm. The site includes information regarding the state tax credit for donation of shells through the program.

Place deep layer of rock salt in bottom of large pan or baking dish. Arrange reserved shells in rock salt, being sure that they are level.

Place one oyster in each shell. Spread crumb mixture over each. Top with a piece of bacon, then sprinkle with cheese. Bake at 450˚F until bacon is crisp and oysters are done, about 8 to 10 minutes. Serves 4 to 6.

This article was published in the Winter 2010 issue of Coastwatch.