SEA SCIENCE: IT RUNS THROUGH RIVERS:Finding the Chemical Signature of a Waterbody 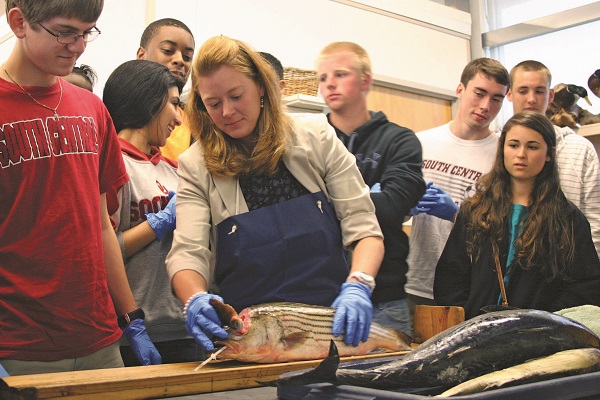 Coley Hughes shows how to extract otoliths, or fish ear bones, to high-school students at an event at the North Carolina Estuarium. Photo by E-Ching Lee.

For years, North Carolina scientists and resource managers have carefully extracted surveillance data on fish movements through an onboard tracking device, so to speak. It allows researchers to learn where the fish went and what they had been doing.

By examining the rings in fish ear bones, also known as otoliths, scientists can identify important spawning habitat and migration  patterns of anadromous fish — those that migrate between rivers, estuaries and the ocean to spawn and feed. Fish form annual rings within their bones, much like growth rings in trees. The rings show the age of the fish, as well as record chemical signatures, absorbed from surrounding waterbodies, that can determine where the fish has been.

Coley Hughes, a doctoral candidate in Coastal Resources Management at East Carolina University, is stepping back from the fish and looking at the water itself. She is hoping to find enough variation among the rivers feeding the Albemarle Sound to be able to identify water and its chemical signatures from each of these tributaries.

Also, until recently, most researchers have simply assumed that the elemental makeup of the water stays consistent enough over time for comparison with the otolith. Her work will be the first to fully test these suppositions.

“We’ve always been basing our assumptions on other estuaries that aren’t as well-mixed as the Albemarle,” Hughes says, noting that many of the presuppositions made about water chemistry are based on studies done in the Chesapeake Bay, which is very different from the North Carolina sounds.

ECU biologist Roger Rulifson has been using otolith analysis techniques to help identify key habitat areas for species such as striped bass and river herring for many years, including for several Sea Grant-funded projects.

“In our early work on fish otoliths, we were able to separate fish collected from different watersheds, but we did not know anything about the water chemistry itself,” he says.

Rulifson could tell if fish had spent time in the same watershed, but he could not name the particular location. “Striped bass collected from Albemarle Sound did not have identifiable element signatures. The ability to determine if a fish was from the Albemarle Sound was like flipping a coin,” he adds.

The chemical signature of a waterbody can be affected by environmental factors, such as the source of freshwater input, proximity to the ocean or the chemical makeup of the surrounding soil. It also can be influenced by pollutants, such as pesticides or heavy metals. Theoretically, each habitat area should have a unique chemical signature that can be identified in the otolith. 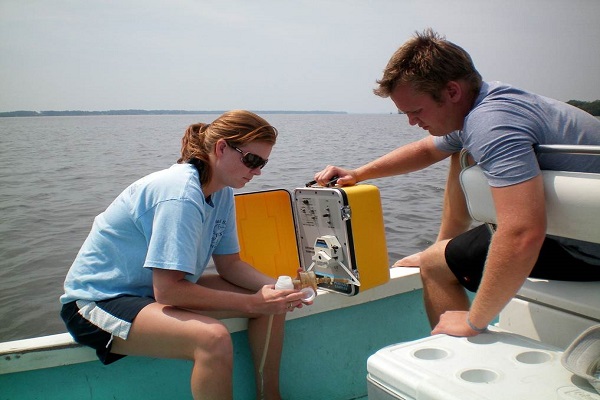 Hughes, a member of Rulifson’s research team, is using the sagittal otolith to identify strategic habitat for striped bass in the Albemarle Sound. This bone grows as the fish grows, and lays down rings as it increases in size. Each ring roughly corresponds to a year of the fish’s life.

As the otolith grows, it also absorbs elements from the surrounding water. Hughes worked with Norman Halden, a geological science researcher at the University of Manitoba, who read the ratio of those elements to the calcium in the bone — a signature for the chemical composition of the water.

In turn, Hughes used spectrometry to determine the elemental makeup of the water from samples taken at areas suspected of being important fish habitat. These elemental ratios are the chemical signature of the water, which were compared with those read from the striped bass otoliths Hughes provided.

Using this method, Hughes could identify in which particular bodies of water the fish spent most of its time during each year of its life.

Water chemistry within a waterbody can vary on spatial and temporal scales. Spatial variation, or how much water chemistry varies by geographic area, is crucial to identifying individual parts of the estuary that are important to the fish.

To find out if she can differentiate among waterbodies, Hughes has been taking water samples from the Chowan, Roanoke, North, Pasquotank, Perquimans, Little, Scuppernong and Alligator rivers. Her samples are from upstream and downstream sites, and from the surface and bottom of the water column. She has been looking for differences among the ratios of barium, strontium, magnesium and manganese to calcium within these water samples.

Though spatial variation has been studied previously, Hughes’ research will be the first to deal directly with temporal variation. To account for the passage of time, water samples were collected from each of the sampling sites every month from 2009 to 2012. Elemental ratios in the water were then compared among months, seasons and years.

To be able to identify specific waterbodies, the elemental makeup of the water must be consistent over time. However, water chemistry can vary by season or be affected by catastrophic short-term events, such as hurricanes.

“How stable is stable enough?” Hughes asked herself. She wanted to know how consistent a habitat area’s water chemistry must be to distinguish it from its chemical signature in an otolith. 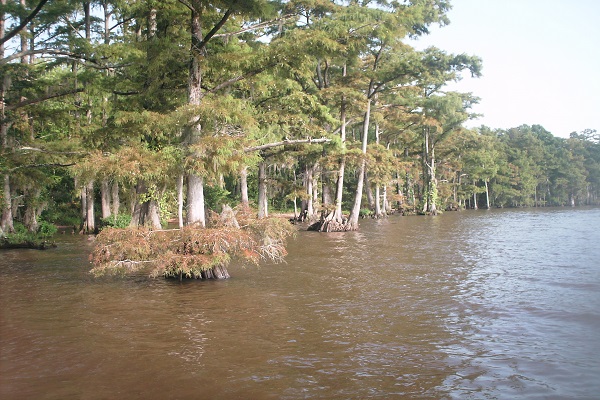 The Roanoke River is both important spawning and nursery habitat for North Carolina’s striped bass. Photo by Chuck Bangley.

Other researchers have found evidence for differences in water chemistry among tributaries. In fact, Hughes’ work builds on previous studies conducted by other ECU researchers. James Morris, another of Rulifson’s students, first identified differences in elemental signatures among striped bass.

That work was continued by John Mohan and Dan Zapf, who also were part of Rulifson’s team. They found evidence that the natal origin, or place of birth, for a fish could be determined by comparing elemental ratios in the otoliths to those found in tributaries of the Albemarle Sound.

“Season is probably the most important scale,” Hughes notes. “Season allows us to look at natal origin.” This means that even if a fish moves between different water bodies in its first year of life, scientists should still be able to identify its place of birth by tracing the chemical signature in the otolith that corresponds with the hatching season.

Also, the chemical signature of habitat areas important to the fish later in life should also be detectable within the outer growth rings of the otolith. If otolith analysis is precise enough, it may be possible to tell which waterbodies the fish favored on a seasonal basis — information that Hughes anticipates might be used to identify strategic habitat areas for striped bass.

So is the water chemistry of the Albemarle Sound tributaries stable enough for otolith microchemistry to be useful? In short, yes — and perhaps even better than expected. 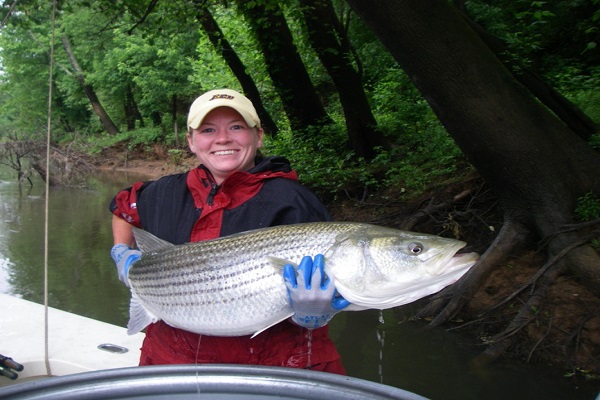 Hughes can use the chemical signatures from the otoliths of this large adult striped bass collected in the Roanoke River to pinpoint areas of Albemarle Sound that were important habitat. Photo courtesy Coley Hughes.

On a spatial scale, Hughes’ findings show that the elemental makeup of the water is not only consistently different among each of the Albemarle Sound’s tributaries, but also within each of the rivers. This means that the chemical signatures in an otolith not only can tell which river the fish was in, but also whether it was upstream or downstream. “I think we can get to a finer scale than we have in the past,” Hughes predicts.

Perhaps even more importantly, Hughes found that there were no major differences in water chemistry within each river by year or season, and seasonal water chemistry patterns were consistent in all of the sampled years. Large-scale events such as hurricanes can cause changes in elemental ratios that are reflected in the otoliths, but those changes had little long-term effect on water chemistry. Normal conditions usually were restored within a matter of weeks.

This validates the assumptions made by previous otolith work in the Albemarle Sound. It also means that scientists and resource managers can use chemical signatures to identify habitat areas without having to worry about the determination being confounded by seasonal or yearly differences in water chemistry.

For her part, Hughes intends to use the validated chemical signatures to identify striped bass nursery habitat within the Albemarle Sound’s tributaries.

Sara Mirabilio, North Carolina Sea Grant fisheries specialist, is intrigued by what Hughes’ results mean for fisheries management. For example, “Coley’s research shows significant differences in water chemistry between the Chowan and Roanoke rivers,” she points out, adding
that such information could help resource managers better target their policies.

Christine Jensen, a biologist in the Habitat and Enhancement Section of the N.C. Division of Marine Fisheries, also is enthusiastic about such a study. “Being able to identify a signature for individual water bodies in the Albemarle Sound area would be very helpful for management of our anadromous fisheries, such as river herring, American shad and striped bass. This information would help to fine-tune our stock assessments by identifying or verifying individual fish stocks,” she notes.

Jensen explains that these species are born in tributaries of the Albemarle Sound, migrate to the ocean, and return year after year as adults to spawn in the same areas where they were born. She speculates that managers could use the data to identify tributaries — and the parts of these systems, such as upstream or downstream — that are favored as spawning grounds and nursery areas.

“That level of information would provide direction on where we should focus restoration efforts,” Jensen concludes.

Chuck Bangley is a doctoral student in coastal resources management at East Carolina University. He studies the interactions between
fisheries and apex predators, such as sharks. He blogs at yalikedags.southernfriedscience.com and tweets as @SpinyDag.