FROM SEEDS TO SHORELINE: Expanding Minds and Restoring Marshes

Emily Woodward is the public relations coordinator with the University of Georgia Marine Extension and Georgia Sea Grant. She is a former communications specialist with the North Carolina Coastal Reserve and National Estuarine Research Reserve. 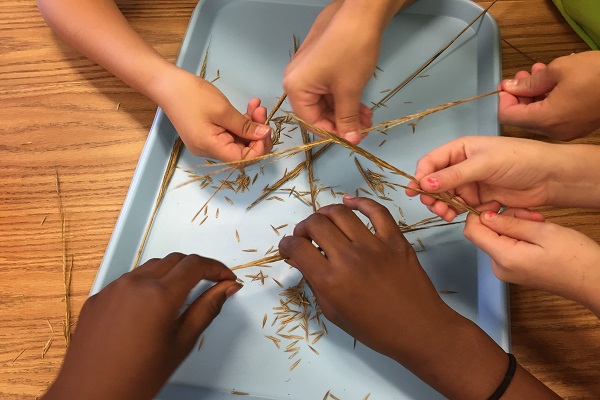 Many hands make light work of removing the seeds from “Spartina alterniflora,” or smooth cordgrass, for a program that introduces students to salt marsh restoration. Photo by Frank Sherman.

Armed with shovels and planting trays, 12 determined fifth-graders make their way down to the water’s edge to plant smooth cordgrass, Spartina alterniflora, at the living shoreline demonstration site on Pivers Island. The members of Team Spartina, as they call themselves, gently pull seedlings from the trays and say their goodbyes before planting them in clusters along the shoreline.

These Beaufort Elementary School students grew the plants in their classroom as part of the From Seeds to Shoreline program, designed to teach students about estuarine habitats and marsh restoration.

“The From Seeds to Shoreline program captured the students’ interest right away because they were able to get their hands dirty,” says Frank Sherman, the students’ science teacher.

“Learning about living shorelines and how they create more natural habitats was more interesting and meaningful for students because of the hands-on component,” he adds.

From Seeds to Shoreline engages students in grades K to 12 in restoring salt marshes. It began in 2011 as a partnership among the South Carolina Sea Grant Consortium, the South Carolina Department of Natural Resources or SCDNR, and Clemson University Cooperative Extension Service. Participation in South Carolina has grown from eight schools in 2011 to more than 40 in 2016.

“Students learn about the importance of the salt marsh ecosystem through the cultivation and transplanting of Spartina, the dominant plant in southeastern salt marshes,” explains E.V. Bell, South Carolina Sea Grant marine education specialist, who coordinates the program.

In 2014, South Carolina Sea Grant and SCDNR received a grant from the U.S. Environmental Protection Agency to pilot the program in North Carolina and Georgia.

Bell worked with the N.C. Coastal Reserve and National Estuarine Research Reserve, or NCNERR, and North Carolina Sea Grant to bring the program to educators and students in the state.

“Our goal at NCNERR is to help humans understand natural systems, their connections to them and the benefits derived from them,” says Lori Davis, NCNERR education coordinator. “From Seeds to Shoreline accomplishes this by offering students an opportunity to participate in hands-on science that not only addresses N.C. Essential Standards, which are statewide courses of study, but also strongly emphasizes environmental stewardship.”

“We’re building students’ conservation ethic by having them be a part of restoring and taking care of coastal ecosystems that are important to North Carolina,” Hathaway says.

“I picked Spartina alterniflora because of its role as a founding species in the salt marsh. Spartina, because of its root system, holds on to sediment and creates salt marsh,” Bell says. “Also, it is very visible as students and parents are going to and from work and school. They see Spartina readily and they identify with it, even if they don’t know its name or use.”

According to the N.C. Division of Coastal Management, North Carolina boasts more than 10,000 miles of estuarine shoreline, about 7,500 miles of which are salt marsh. These marshes provide a wealth of benefits to our coast, from filtering pollutants and stabilizing shorelines to serving as nurseries for commercially important fish. 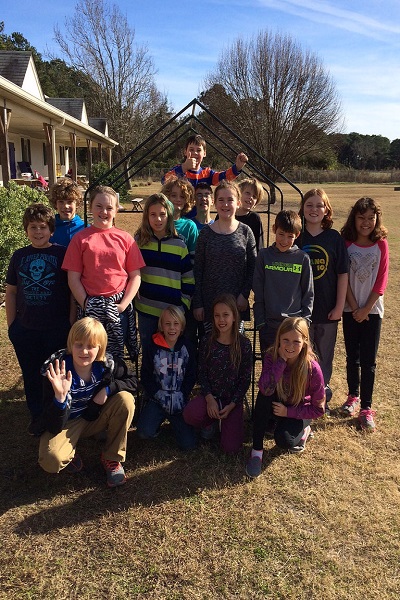 Students from the Tiller School in Beaufort build a portable greenhouse for growing the “Spartina” plants. Photo by Kelly Riley.

Spartina also is common in North Carolina’s intertidal marshes. It can tolerate tidal flooding, a range of salinities and varying water
temperatures — important attributes for a plant that prefers a habitat that requires these survival abilities. However, human activities and natural processes have introduced threats to salt marsh survival, including sea-level rise, erosion and coastal development.

Protecting and restoring this habitat can offset some of the negative effects that humans can have on the environment. In the From Seeds to Shoreline program, students learn about the importance of salt marsh ecosystems, and actively contribute to all steps in the restoration process — including harvesting, storing, germinating, cultivating and planting Spartina along the coast.

Educators hope this experience will inspire students to be stewards of coastal and estuarine ecosystems.

“I want them to be interested in science and interested in the world around them. We live on the coast, so the students can connect with living shorelines and shoreline restoration,” Sherman says.

The pilot project in North Carolina kicked off in summer 2015 with educators from public and private schools.

Hathaway and Davis incorporated educational and scientific perspectives during the teacher training, including a discussion on salt marsh ecology by Carolyn Currin, from NOAA’s National Centers for Coastal Ocean Science in Beaufort. Participants also toured restoration sites on Pivers Island to see how Spartina stabilizes the shoreline, reduces erosion, and offers habitat for birds, fish and crustaceans.

“Providing educators the opportunity to learn about research happening right in our backyard from a local expert was an excellent way to convey just how important and impactful this program can be in North Carolina,” Davis says.

Educators received step-by-step instructions and a small greenhouse for growing the plants, as well as ready-made interactive lessons on salt marsh ecosystems.

“I am always working to provide authentic, real-world learning experiences. This was the perfect addition to our curriculum: an opportunity to have the kids working outside the classroom with a real audience working together to solve an authentic problem,” says Lisa Giacomelli, who teaches sixth- through eighth-grade science at the Wilmington Academy of Arts & Sciences. “Playing a small role in the protection of our salt marshes was a bonus.”

Davis harvested Spartina seeds from Pivers Island, Masonboro Island Reserve and Rachel Carson Reserve for the participating schools. Masonboro Island and Rachel Carson reserves are protected and managed by the NCNERR for research, education and stewardship. The plan was for the students to plant the Spartina at these sites at the end of the academic year to restore marshes and stabilize shorelines.

The students quickly discovered that growing the harvested seeds into seedlings was no easy feat.

The first step involved storing the seeds. Wild Spartina goes through a dormant period after the seeds drop from the plant into the mud. To simulate this process in the classroom, students placed seeds in a bag or container filled with water and stored them in a fridge for six to eight weeks.

“Our challenge was that our refrigerator kept freezing our seeds into solid chunks of ice — and not once, several times over. It was the perfect example of how science doesn’t always work. It can sometimes be a one-step-forward, two-steps back process, but there is always something to be gained and it was important to allow our ‘failures’ to drive us,” Giacomelli says.

Each time, Giacomelli and her students thawed the seeds and placed them back in the fridge. They eventually were able to plant the seeds but they didn’t grow very well.

“Just because our results were not exactly what we expected, we still learned a lot and valued the experience much more than the end result. My kids learned that sometimes unexpected results can lead your work in an entirely new, often great, direction,” she adds. 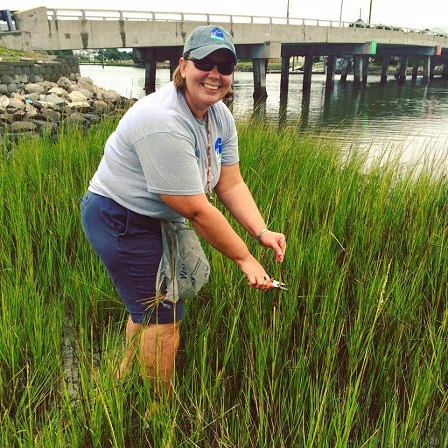 “The greenhouse was missing pieces. This gave the students the opportunity to problem solve and come up with a solution. We talked about scientists in the field having to be creative in solving problems,” he recalls.

Following seed storage, the students moved to their next challenge: germinating the seeds. As the seeds began to sprout, they were removed from the containers, planted in seed-starter trays and placed inside the greenhouses. Ideally, the greenhouses would keep the sprouting seeds warm and moist enough to survive through winter. Weather, however, threw an unexpected wrench in that plan.

In February 2016, coastal North Carolina was hit with severe storms that brought heavy rainfall, flooding, high winds and even a tornado in Carteret County. The lightweight greenhouses, designed to be easily assembled and transported, were no match for 50-mile-per-hour winds.

Carlin Patterson and her fourth-grade classmates at the Tiller School in Beaufort made it through the storage and germination phases. They were in the midst of cultivating the seedlings when unforgiving weather rolled through. “I was a little disappointed when the storm destroyed our greenhouse and the plants inside. The hardest part was starting the process over,” Patterson says.

Losing the plants after caring for them daily was a tough hurdle for the students, but according to Patterson, challenging moments like this made the project enjoyable.

They managed to restart the process using back-up seeds from Davis. In the end, the students were able to grow a handful of plants.

Participating educators noted that the hands-on learning experience was a success regardless of how many plants went in the ground at the end of the academic year. Teachers were able to connect students to their surroundings and instill a stronger appreciation for natural ecosystems.

“I want my kids to really take in and think about the environment around them and ways they can contribute to the better care of the world around us. I also want them to be empowered to know that they can make a difference, and they can have an impact on our community in positive ways,” Giacomelli explains.

Davis and Hathaway plan to continue the program next year, applying lessons learned from the pilot project so they can grow the program and foster the next generation of estuarine stewards, one Spartina plant at a time.

“We definitely know we had success in participation. They did the process the best they could. Kids had ownership and teachers had ownership,” Hathaway says.

“I think it was a huge success. Students got the opportunity to see the process fully through,” Davis adds. “They were able to hold the seeds, count the seeds, hear about shoreline stabilization — no textbooks or presentations needed.” She plans to work with the same teachers in the upcoming academic year to perfect the growing process.

The North Carolina program will go forward without EPA funding, which covered the one-year pilot run. However, Bell sees great opportunities emerging out of the strong partnership between Sea Grant and NCNERR.

“The stewardship message is constant,” Bell adds. “How you get there is the exciting part. There can be a unique spin on how
you can achieve that.”

Giacomelli already is looking forward to growing more Spartina in the next academic year.

“I would absolutely do this again,” she says, adding that she would get her students participating earlier, including collecting seeds. “The seeds were their ‘babies’ and I think involving them from the very beginning would make it all even more worthwhile.”