View as a PDF 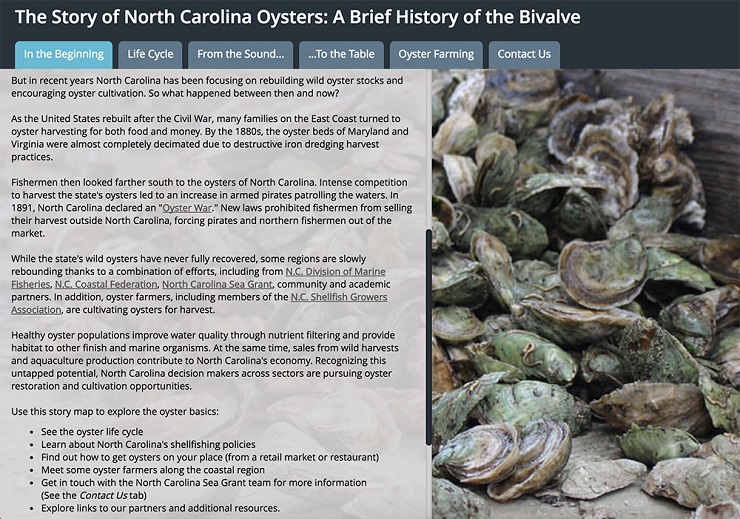 The completed oyster story map covers the past, present and future of oysters in North Carolina. Photo from “The Story of North Carolina Oysters”

Life is a journey, not a destination. But getting from point A to point B is easier now than ever with the profusion of technology in today’s world.

“Everyone and their brother has a smartphone,” says Jenny Holder, a geographic information system, or GIS, analyst and developer. “What they don’t realize is when you pick up your phone, you are holding GIS technology.”

Holder started as an archaeology student and chose to pursue a graduate degree in GIS at North Carolina State University as a way to explain science artistically through mapping. Looking for a full-time job, she attended a career fair where she was introduced to Jane Harrison and the fascinating world of oysters.

Unlike traditional paper maps, story maps combine spatial information with text, pictures and multimedia through an online, interactive platform, “engaging people because they have a role to play,” she adds.

“Many coastal restoration activities take place under the water, so unless you know where to look and own a dive suit or a boat, you would never know what’s happening. A story map makes efforts like oyster reef restoration visible to people,” Harrison says.

Wanting to narrow her focus for this first project, Harrison decided to limit the story map to oyster aquaculture and oyster reef restoration because of building interest across the state. A keystone species, oysters provide multiple benefits: they filter and clean water, provide essential habitat for aquatic animals, and support a fishery with deep ties to North Carolina’s past, present and future.

Holder liked the oyster idea, and with funding from Sea Grant, the pair set off on a quest to crack open the secret life of oysters.

With a seed of an idea rolling around in their heads, Harrison and Holder realized that before any mapping could take place, they needed to learn more about oysters.

“I didn’t know anything about oysters and oyster history,” Holder reveals. “I didn’t really eat them either,” she adds, a lack of exposure and taste experiences shared by Harrison.

In their research, they traveled to Sea Level, a small community on the banks of Core Sound, where they visited Millpoint Aquaculture, the only commercial oyster hatchery in the state. The tour concluded with a special treat neither anticipated: a bag of oysters fresh out of the water. “We watched YouTube videos to learn how to shuck, cook and eat them,” Harrison remembers. “I found a tiny, orange soft-shell crab in one of my oysters and ate it, which is supposedly good luck.” 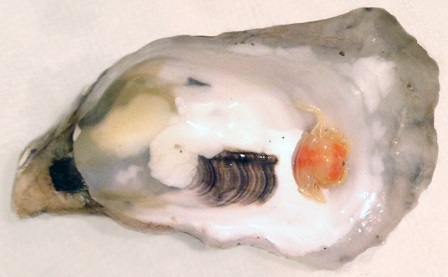 Despite their parasitic nature, oyster pea crabs are considered a delicacy and a good-luck charm by many. Photo by Jane Harrison.

Bellies full and blessed by an oyster pea crab, they began searching for data on coastal water quality, habitat and current oyster leases. Harrison quickly learned that not all data are created equally. “We had to consider if it was up-to-date, where it came from and if it could be represented spatially. Data availability drove some of the products that ended up in the final map,” she explains.

“It’s easier to start with someone else’s dataset and not reinvent the wheel,” Holder adds. “We were hoping to do more complex analyses but did not find enough existing data, confirming the need for this project.”

To fill at least one gap, Holder created a geographic dataset of all the markets selling local oysters by compiling different lists and calling each market. “Having lived in North Carolina my whole life, from the mountains to more recently by the sea, it was fun to interact with my fellow North Carolinians,” she recounts.

“I was surprised by how many markets have oysters year-round — local oysters in season and Virginia oysters out of season,” Holder admits. “There is a huge market here for local oysters that the state is not yet tapping.” In the summer, local aquacultured oysters are snatched up by restaurants.

Holder and Harrison pared down their findings to the most essential ideas for understanding the state of oysters in North Carolina. They combined the more traditional spatial data with photos, descriptive text and video of the oyster life cycle.

“I love the video about the oyster life cycle because it’s just so fun,” Harrison notes. The oyster cutouts used in the video became a theme within the map and added a physical element to this largely virtual project.

All of these components went into an online mapping platform, where Holder molded them into a singular story map. “As the mapmaker, I can dictate how a user sees the information,” Holder says.

The completed oyster story map, now available at go.ncsu.edu/oystermap, weaves together history, science, policy and dinner. Everyone from seafood lovers to students and policy makers to aquaculturists, can learn something new with a few clicks of a mouse. 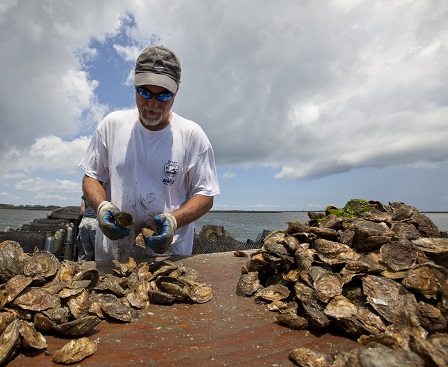 Jay Styron of Carolina Mariculture Co., one of the businesses featured in the story map, sorts through oysters. Photo by DEH Photography.

“We wanted to reach farmers, fishermen, young people — and let them know they don’t need to leave their coastal communities to find work,” Holder says. The map links this unique coastal resource with sustainable forms of employment. For example, aspiring entrepreneurs can use the map to learn more about oyster aquaculture businesses and find additional resources to help them join the industry.

“Market demand for cultured oysters in North Carolina remains strong and is growing,” says Chuck Weirich, Sea Grant aquaculture marine specialist. “We need more tools like this that showcase oyster aquaculture as a viable endeavor for folks, including fishermen looking to diversify their incomes, as well as new entrepreneurs.”

After viewing the map, the next step for a teacher might be to contact Sea Grant — specifically marine educator Terri Kirby Hathaway — about associated lesson plans under development. The story map could serve as a resource for creating a high-school level aquaculture curriculum, further encouraging students to enroll in a community college or university degree program in marine aquaculture, Harrison adds.

The story map made its debut with students during an aquaculture and seafood career day at Mattamuskeet Early College High School in Hyde County. Students visited information tables manned by Sea Grant and partner organizations, connecting on many levels with their community’s long-established shellfish industry. Learn more about the event at go.ncsu.edu/042116. 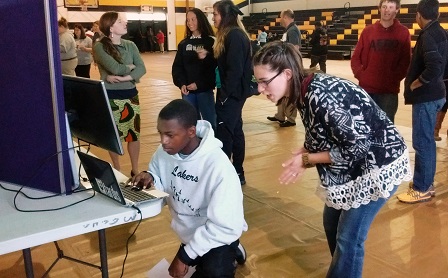 Even now that the oyster story map is public, Holder emphasizes that it is a living document. “Unlike a paper map, you can update the data in a story map and it can grow over time. And being on the internet lets someone share it more easily with their networks through social media.”

Holder hopes that projects like this will open people up to the creative potential of GIS. Crafting an effective story map is a science and an art; it is as much about the data as it is about the visuals and layout.

Harrison views story maps as a potential tool for scientists of all stripes. “I would encourage researchers to create more gateways to their work. If we want people to understand the research we are doing and care about it, we need to consider public-friendly forms of engagement. Story maps are one way to do that,” she says.

“He was a bold man that first ate an oyster,” wrote Jonathan Swift, author of Gulliver’s Travels, on the role of courage in making great discoveries. At least now, those exploring the world of oysters have a modern map for finding their way.

Discover the wild and wonderful story of North Carolina’s oysters at ncseagrant.ncsu.edu/oysters.