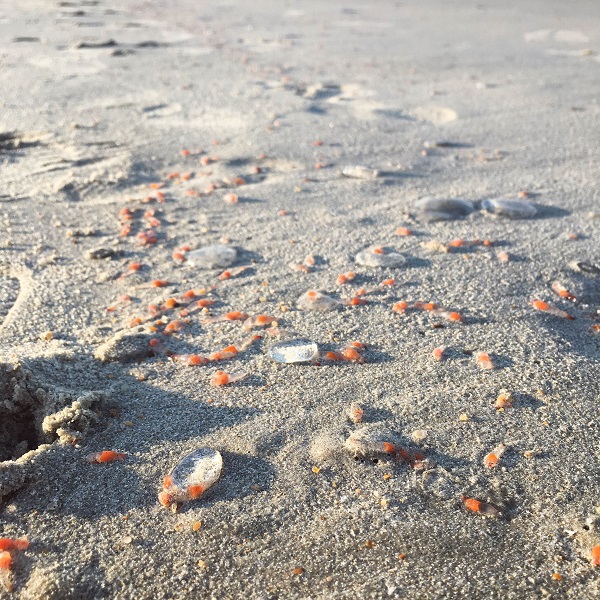 Beachgoers on the Outer Banks were surprised by swarms of naked sea butterflies and cold sea water. Photo by Jessica Eveleigh.

In late July, beachgoers were surprised to see naked sea butterflies on the northern Outer Banks, along with lower 60-degree F water.

Clione limacina are shell-less mollusks. They are neither eggs nor jellies, and they do not sting. Also called sea angels, these animals are completely harmless. 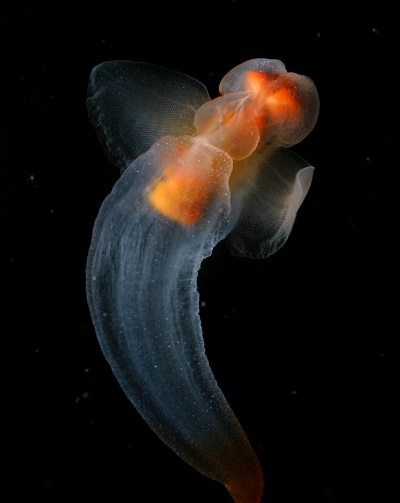 These distinctive Arctic creatures, related to snails and sea slugs, are tiny, translucent and roughly 1 to 2 inches long. They look like ice cream cones with small wings that help them swim. Their heads and tails are orange-red. The visceral mass — which contains the digestive, respiratory, excretory and reproductive organs — is a darker brownish-orange.

Naked sea butterflies normally are found from the Arctic to Cape Hatteras, so North Carolina lies at the southern extent of their range. They thrive in water temperatures between 28 and 63 F.

Even though they are small, these animals are voracious predators. They feed on shelled sea butterflies by catching them, holding onto the shells and pulling the animals out. In turn, naked sea butterflies are food for baleen whales such as humpbacks and bowheads.

These delicate animals are protandrous hermaphrodites. Each individual contains male and female reproductive organs. They start as males and develop eggs as they grow. After the eggs are fertilized, the sea angels release gelatinous egg strings into the water column where they float until they hatch. The larvae have a small shell when they hatch, but it is cast off after a day or two.

So, how did these beautiful tiny creatures invade our waters? After several days of strong winds from the west or southwest, the warm surface waters of the Outer Banks were blown offshore. Colder, nutrient-rich water located deeper below the surface rose up in its place — a process known as upwelling. The National Oceanic and Atmospheric Administration’s National Ocean Service has more information on upwelling at oceanservice.noaa.gov/facts/upwelling.html.

When the cold water moves up from the deep to replace the warm surface water, it tends to bring interesting things — such as naked sea butterflies, salps or other cold-water creatures — with it.

The ocean changes day to day. It is a very complex and dynamic system with many variables. This is why I am infatuated with the ocean and everything in it. How can you not be curious about, and connected to, something that is constantly changing and offering up new discoveries?

Here’s to the invasion of the naked sea butterflies! What’s next?