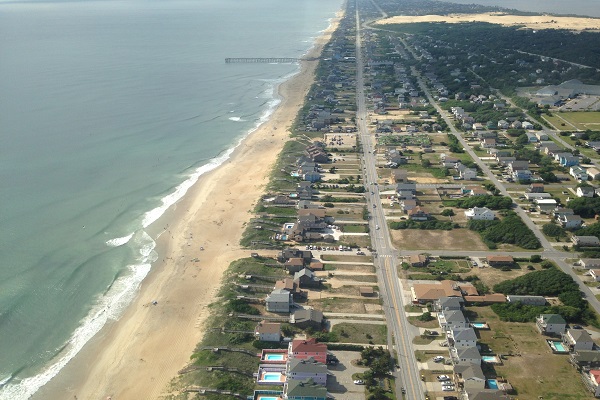 Hurricane Hugo made landfall in South Carolina, but its path brought damage through the state s well as into Charlotte, North Carolina. Photo courtesy NOAA.

When Hurricane Hugo hit the city in September 1989, Whitehead was in Illinois for her mother’s graduate program. That meant she had power. “That night was my first ‘forecasting’ experience. It was the pre-internet days, so we were on the phone with our Charleston neighbors all night, relaying what we were seeing on The Weather Channel,” she recalls.

“I didn’t have to deal with the immediate aftermath of living with no power, but my future husband did. I also watched Mom get our townhouse repaired, long distance, around our renters, and in enough time for us to return back home after she finished her degree.”

Whitehead also learned about storm-related flooding in low-lying areas even from unnamed storms. “Also, as a teenager, I ended up with my car parked in our high school’s flooded student lot downtown more times than I probably should admit.”

At the time, student parking was along Fishburne Street, which would flood if it rained at high tide. “We couldn’t usually just go move our cars,” she recounts. “Luckily, later when I lived on campus at the College of Charleston, it was easier to keep on top of the  forecasts and go move my car to an upper level of a parking garage when necessary.”

Whitehead now brings her integrated perspective to duties as a member of the new federal Advisory Committee for the Sustained National Climate Assessment. The National Oceanic and Atmospheric Administration recently announced the panel, which holds its first meeting in mid-September. 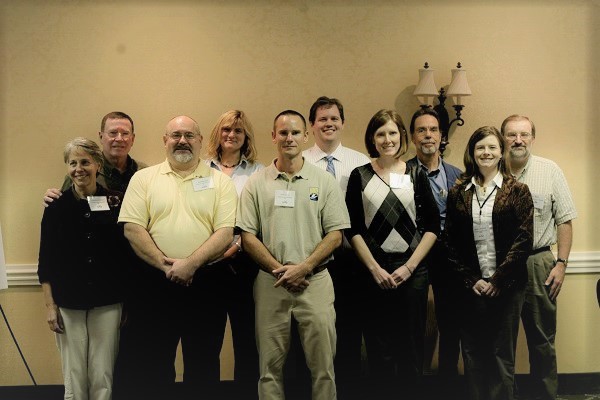 “I am honored to serve with such distinguished experts in this field,” she notes. The national Sea Grant Climate Network nominated Whitehead, who co-chairs that group.

“A strength that I bring is my experience in helping citizens in the coastal Carolinas use information about weather and climate to make better decisions about their lives and livelihoods,” she adds.

Jack Thigpen, North Carolina Sea Grant extension director, agrees. “Jess will bring the reality of working with communities trying to respond to challenges with aging infrastructure but limited tax revenues, as well as ones looking at growth in terms of redevelopment on barrier islands.”

Recent projects include working with Hyde County, where its low-lying mainland has an economy focused on agriculture, along with fishing and forestry. “We have looked at communities’ vulnerabilities to flooding and storm surge — and options to reduce damages that also help Hyde County earn discounted flood insurance rates,” Whitehead explains. Those efforts have been in partnership with Georgia Sea Grant and local officials.

In Nags Head, town officials sought North Carolina Sea Grant’s help to identify how to maintain infrastructure over the next 30 years, particularly water and septic systems, and roads. Along with Whitehead, Lisa Schiavinato, Sea Grant’s coastal law, policy and community development specialist, has provided expertise to the town as well.

“One of the items that came out of our sessions with Hyde County was getting better discounts on flood insurance through the Community Rating System,” Whitehead explains. 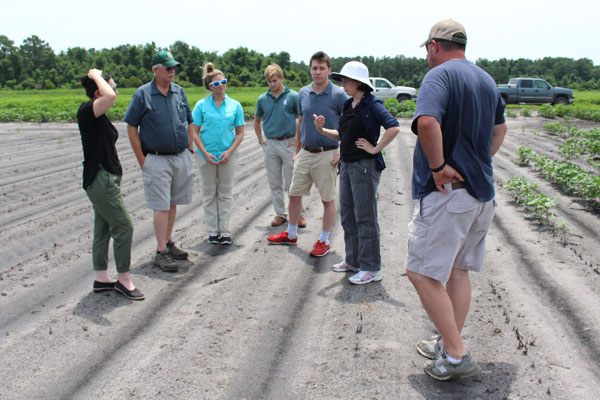 A North Carolina Sea Grant team also has been working with Hyde County farmers, as agriculture and forestry are key economic sectors. Photo by Kristen Downs.

“It’s been great to work with them and Georgia Sea Grant to learn about specific steps they can take to become more flood resilient — and get more CRS points. If they earn enough points, they get additional discounts on flood insurance for everyone in the county with a federal flood insurance policy.”

Overall, VCAPS sessions have helped 17 communities along the Gulf and Atlantic coasts better understand weather and climate hazards, their communities’ vulnerabilities to these hazards, and adaptation options that could increase community resilience. Whitehead is a co-creator of the process, along with colleagues at the Social and Environmental Research Institute and the Carolinas Integrated Sciences and Assessments Program, or CISA.

“We value Jessica’s ability to listen to community concerns and encourage innovative solutions, while adding a scientific perspective,” says Susan White, North Carolina Sea Grant executive director. “In addition, she offers leadership in training others to facilitate such important discussions.”

Whitehead has worked not only with communities in the Carolinas, but also in Maryland, Georgia and Maine, and regularly provides VCAPS training at regional and national meetings.

In North Carolina, she works closely with the State Climate Office, based at NC State University, and with varied state and regional programs that have funding from the U.S. Geological Survey, the U.S. Department of Agriculture, and the federal Environmental Protection Agency, as well as NOAA. “We can learn from each other’s demonstration projects, find synergies in our related efforts and avoid duplication,” Whitehead notes.

Whitehead earned her bachelor’s degree in physics from the College of Charleston. At Penn State, she earned her masters’ degree in meteorology and her Ph.D. in geography. Her doctoral dissertation tied together her backgrounds in both physical and social science by focusing on building scenarios to determine the capacities of small drinking-water utilities to adapt to climate change.

The 15 members of the new federal Advisory Committee for the Sustained National Climate Assessment will advise the National Oceanic and Atmospheric Administration on sustained climate assessment activities and products, including engagement of stakeholders.

NOAA will provide the committee’s advice to the White House Office of Science and Technology Policy, or OSTP, for use by the U.S. Global Change Research Program. USGCRP is a confederation of the research arms of 13 federal departments and agencies that carry out research, and develop and maintain capabilities to support the nation’s understanding of and response to global changes.

In implementing a Sustained National Climate Assessment process, USGCRP seeks to facilitate continuous and transparent participation of scientists and stakeholders across regions and sectors. That will enable new information and insights to be included as they emerge, NOAA notes.

The advisory committee’s members represent varied viewpoints, geographic regions of the country and diverse sectors of U.S. society. Members include experts in physical and social sciences, communication, education and other relevant topics. The panel members are:

NOAA Administrator Kathryn Sullivan, in consultation with OSTP Director John Holdren, made the appointments. Sullivan also serves as federal undersecretary of commerce for oceans and atmosphere.