ENGAGING THE FUTURE: SciREN and the Evolution of Science Outreach 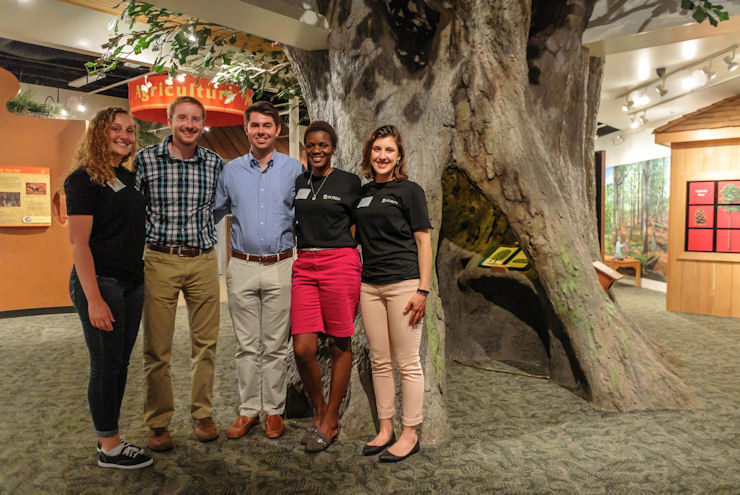 It was after closing time, but the North Carolina Aquarium at Pine Knoll Shores was full of people. The light from tanks danced across faces of teachers and graduate students talking excitedly about ongoing research in particle physics and ocean acidification.

Multiply that scene by four locations to appreciate the growing impact of the Scientific Research and Education Network.

Better known as SciREN, the organization’s framework is straightforward: Recruit scientists to create K-12 lesson plans based on their work. Then the magic happens.

Organizers welcomed a roomful of educators to the 2014 SciREN Coast. Photo by Emily Woodward/UNC IMS.

At networking events, researchers connect with educators eager for the real-world lessons.

“It’s seamlessly done. I can slide the lesson plans right in because they’re aligned to the standards. SciREN has also exposed me to research I wouldn’t have learned about as quickly otherwise.”

Besides using lessons in her classroom, Price attended three conferences through her SciREN connections. That extended impact complements the founders’ vision.

“Our primary goals are to enhance science in the classroom and help make researchers more well-rounded by giving them an opportunity to translate their work,” explains co-founder Justin Ridge.

The fifth annual SciREN Coast will be held in early 2017, and it’s in good company.

SciREN now has four events in two states — and a SciREN Alabama currently is in the works. Propelled by excitement among researchers and educators, SciREN is enriching science education in classrooms across the Southeast.

SciREN began at a Research Educator Exchange Forum, or REEF, sponsored by the Centers for Ocean Sciences Education Excellence-SouthEast and the Sea Grant programs in North Carolina, South Carolina and Georgia. REEF provided outreach training to scientific researchers and linked them with informal education centers to plan an event.

Ridge and Ethan Theuerkauf were doctoral students at the University of North Carolina at Chapel Hill’s Institute of Marine Sciences in Morehead City when they attended REEF 2012. They were matched with Meredith Heaton Bruhn, an educator at the N.C. Aquarium at Pine Knoll Shores.

“For our outreach project, we wanted to present an easy way to get scientific lesson plans into the classroom that would be novel and inspiring for students,” Ridge explains.

It was immediately clear that those goals addressed a real need. “We put on the event, took surveys and everybody loved it. It was a massive, crazy hit,” Heaton Bruhn recalls.

At this point, they could have congratulated themselves and moved along. Ridge and Theuerkauf did the opposite.

“SciREN became a phenomenon because Justin and Ethan saw its value and wanted to keep going with it,” notes Terri Kirby Hathaway, North Carolina Sea Grant marine education specialist. “They recruited other people to help plan, and they continued to grow the organizational part of it.”

Hathaway and Carrie Thomas of NC State University were among the organizers of REEF in North Carolina. Hathaway continues to help teachers use SciREN events and lessons to earn renewal credits for classroom-teaching licenses and certification as environmental educators.

Ridge recalls the early excitement surrounding SciREN. “We had our second Coast event, which turned out to be bigger and better than the first one, and we started thinking: It’d be great to bring this to other areas.”

Heather Heenehan and Alyse Larkin, then doctoral students at Duke University, and Avery Paxton, a doctoral student at IMS, joined the SciREN Coast leadership team and were a pivotal part of the organization’s expansion. They recruited more graduate students from their respective universities and NC State. The inaugural SciREN Triangle, or SciTri, was held at the N.C. Museum of Natural Sciences in Raleigh in 2014.

“We had a lot of success our first year,” adds Eleanor Caves, a doctoral student at Duke and an organizer of SciTri. Lesson plans at the Triangle event moved beyond marine and coastal science to cover a range of STEM disciplines, drawing on the variety of local scientific research. 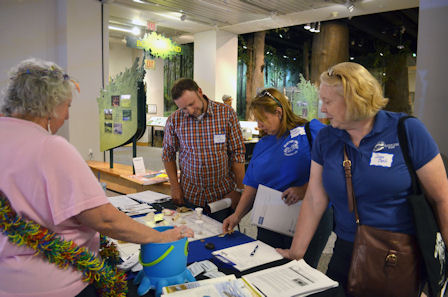 “The Triangle team took it upon themselves to keep the foundation of SciREN in mind, but make it their own and use the resources that are unique to the Triangle,” Theuerkauf says. The museum is one of those resources.

“Our partnership with SciREN Triangle has been a natural match from the beginning,” says Megan Chesser, teacher education specialist at the N.C. Museum of Natural Sciences. “It’s wonderful to work with a group of dedicated graduate students who are equally passionate about our shared goal of making real scientific research relevant for educators and students in local communities and classrooms.”

There have been some additions to SciTri over the years. The leaders obtained funding from Duke and UNC-Chapel Hill to provide teachers with free lesson-plan kits containing materials to bring SciREN lessons into classrooms. Duke doctoral student and SciTri organizer Rebecca Lauzon supervised the creation of the kits, which have served more than 1,000 students so far.

In spring 2016, Caves, Lauzon and Patrick Green, a Duke doctoral student and SciTri organizer, received a grant from Duke’s Support for Interdisciplinary Graduate Networks. This enables collaboration with Master’s of Arts in Teaching students to help SciREN researchers write stronger lesson plans. “It just takes a little bit of encouragement from a teaching student to say, it’s not actually that hard to turn something like neuroscience into a lesson plan for kindergarteners,” Caves says.

As SciREN began to expand, Ridge and Theuerkauf realized they needed a new level of organization. In June 2015, SciREN officially became a 501(c)(3) nonprofit, with the original Coast team serving on the board of directors.

“We wanted to become a nonprofit to be able to manage multiple sites and keep them connected,” Ridge explains. The board members serve as advisors, ensuring that SciREN retains its core mission while expanding to new locations.

“The nonprofit provides a structure that operates outside of the academic institutions,” notes Theuerkauf, now a coastal geologist at the Illinois State Geological Survey. “It provides a true pathway for SciREN to move forward.”

Teams interested in starting new SciREN events can contact its board of directors. They will receive the SciREN handbook with steps to jump-start new locations and suggestions for finding funding. New teams then work with the board to refine their plans.

As an independent organization, SciREN is now expanding beyond its North Carolina origins.

SPREADING IN THE SOUTHEAST

When Maite Ghazaleh became a doctoral student at the University of Georgia, she remembered SciREN from her college days at UNC-Chapel Hill. “The teachers involved were so enthusiastic about SciREN that when I moved to Georgia, I thought I should start it here,” she says.

Ridge recalls the email from Ghazaleh. “That was the first time that we’d been contacted by someone looking to expand SciREN,” he notes. “It was a great moment in SciREN history.”

In April 2016, 31 educators and 10 researchers attended the first SciREN Georgia event at Sandy Creek Nature Center in Athens. For Thomas, the best part of the event was interacting with teachers. “Their faces just light up when they talk with the researchers,” she says. “It’s nice to see that spark.”

SciREN Georgia also filled a need in the broader community. “This is a college town, so SciREN was a bridge between the university and the local educators,” Ghazaleh explains. “It’s something that really connects the community.” As in other locations, local businesses were eager to support SciREN with door-prize donations.

“We’re hoping to include students from the ECU medical and dental schools too.” The networking event, held at GO-Science in Greenville, included funding from the Biodiversity Initiative at ECU.

During the planning stages, Lichti was optimistic based on early connections. “We’re going to make SciREN proud to have another location.”

“I can’t believe what a great resource it is,” she adds. “The connections with local researchers are perfect to launch problem-based learning activities and show students the relevance of the content that they’re learning.”

Educators who attended SciREN Georgia also praised the event in follow-up surveys. “This provides new ideas and resources to use in my classroom,” one teacher said. Multiple educators noted that meeting graduate students who were “excited and personable” was one of the best parts of the event.

“SciREN provides a mechanism for researchers to support schools and educators,” another teacher wrote. 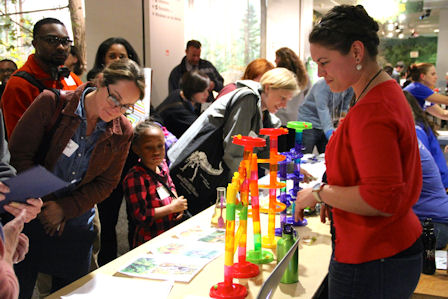 Many came to the N.C. Museum of Natural Sciences for the first SciREN Triangle in 2014. Photo by Eric Johnson/UNC Chapel Hill.

The impacts often transcend networking events. Justin Baumann, a doctoral student at UNC-Chapel Hill and SciTri organizer, shares a story about a teacher at a special-needs school. “She met us at SciREN and asked: ‘Can I come to your lab and show my kids what research looks like?’ We said yes, and so did several other people. They’ve been all over the Triangle to five or 10 labs now.”

Researchers benefit from participating in SciREN as well. Through writing lesson plans, scientists learn to effectively communicate research methods and results to a broad audience. Some researchers might consider a career in science outreach if they enjoy their experience with the teachers and museum partners, Hathaway notes.

SciREN team members agree. “The idea of us being a network is not only to connect educators with researchers, but to connect them with other opportunities for outreach in North Carolina,” Green says. “It behooves us to work together to improve what we’re all doing.”

Jacob Regensburger, a science and math teacher at the Seventy-First Classical Middle School in Fayetteville, enjoys using SciREN lesson plans. “I used a game that was shared by the EPA in my seventh-grade science class, and it went great,” he says. “I can’t wait to go to another event.”

Even as it connects organizations across the state and beyond, SciREN maintains strong relationships with early partners such as the N.C. Aquariums and Sea Grant. “North Carolina Sea Grant has been there from the beginning,” Ridge says. “They’ve always been extremely helpful with reaching out to educators and providing publicity. It’s been a great relationship.” Sea Grant is a financial sponsor of SciREN lesson-planning workshops, while Hathaway and the communications team also participate in networking events.

The benefits are mutual, Mosher adds, noting that researchers often share results from North Carolina Sea Grant research. Ridge, who is completing his doctorate next spring, received a fellowship funded by Sea Grant and the N.C. Coastal Reserve. Ridge and Theuerkauf both were involved in other Sea Grant research projects.

“We now see professors and students seeking fellowships regularly include SciREN as part of the outreach plan within a proposal for our research funding,” Mosher adds.

Overall, the enthusiasm for SciREN is contagious. 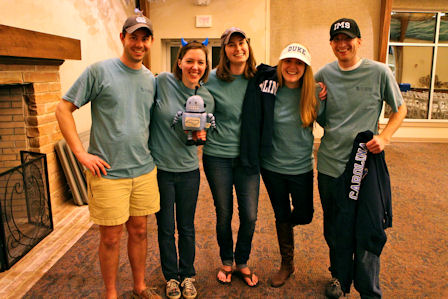 “SciREN sneaks up on you, and you fall in love with it, you really do,” Heaton Bruhn says. “Every teacher who comes loves it. Every scientist who comes ends up having a blast.

Even our security guards at the aquarium like it. Everybody loves it.”

SciREN leaders in other locations are quick to acknowledge the legacy of Ridge, Theuerkauf, Heenehan, Larkin and Paxton.

“It’s pretty amazing to think that seed money from Sea Grant and work from the Coast team have grown into this huge regional science event,” Baumann notes.

Green echoes those sentiments. “Anytime we need anything, Justin and Ethan have really taken it on themselves to help out. This is something they’re obviously passionate about, and they’re willing to put in a lot of work to make sure that SciREN continues.”

SciREN’s founders are optimistic about that future. “There’s a need for SciREN, and people are engaged,” Theuerkauf says. “Charting the path forward is a big piece of where the organization is right now.”

Based on SciREN’s history, it’s likely that the journey ahead will be an exciting one.

Kathleen M. Onorevole received a master’s degree from the University of North Carolina at Chapel Hill. As a member of Michael Piehler’s lab, she studied the development of nitrogen cycling in restored oyster reefs and salt marshes.