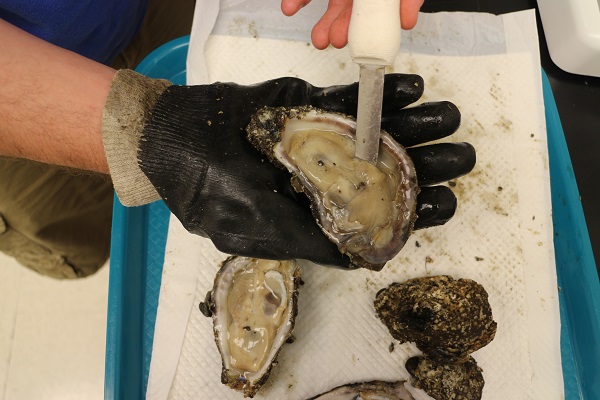 In a North Carolina Sea Grant-funded study, Brett Froelich will examine oysters for two species of “Vibrio,” bacteria that occur naturally in North Carolina’s waters particularly in the warmer months, that can make people sick. Photo by Becky Fitzula/UNC IMS.

Brett Froelich loves to eat raw oysters. Fortunately for him, that’s often a perk of his job.

His research involves gathering oyster samples from commercial growers. “The farmers are so proud of them that they usually crack a couple open while I’m there to pick up samples and we usually have a few together,” he says.

Froelich, a biologist who studies pathogens in shellfish, seeks samples from commercial aquaculture operations and under-dock oyster gardens to better understand the human-health risks of infection from Vibrio in oysters.

“I want to stress that while we are looking at bacteria in these oysters that can make people sick, I just want to highlight that North Carolina oysters are tasty,” Froelich says. “In fact, our goal though is to make people enjoy them more — with less risk.”

He is part of a North Carolina Sea Grant-funded study led by Rachel Noble, a biologist at the University of North Carolina at Chapel Hill’s Institute of Marine Sciences. From previous studies, Froelich’s team already has data on Vibrio infection from wild oysters. Now they want to compare their findings with oysters from commercial growers and under-dock gardeners.

Vibrio are always present in North Carolina’s waters, especially in warmer months. Some species can cause disease while others are harmless. Froelich is looking for two species of Vibrio — vulnificus and parahaemolyticus — that can make people sick, causing  gastrointestinal distress, flesh-eating disease and even death. 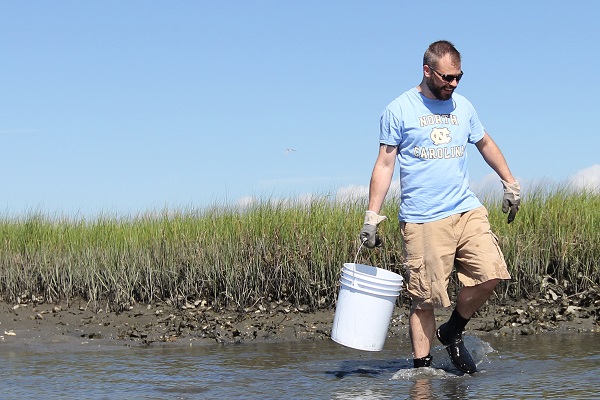 He is seeking oyster samples from commercial and under-dock growers. Photo by Mary Lide Parker/UNC Research.

He seeks to identify environmental conditions and handling processes that might increase the concentration of harmful Vibrio species.

North Carolina’s oysters already are safe to eat, says Shannon Jenkins, section chief of Shellfish Sanitation and Recreational Water Quality, part of the N.C. Division of Marine Fisheries. His team ensures the safety of North Carolina consumers through efforts such as closing oyster harvests after large rainfall events and educating shellfish dealers and growers on proper handling, harvesting and refrigeration.

While Vibrio is common and occurs naturally in the state’s waters, Vibrio infections have traditionally been more common in other states because of higher levels of oyster production in those states and different Vibrio populations, he adds.

Jenkins welcomes this Sea Grant research as a way to make North Carolina oysters even safer to eat. “Any time a study can increase the understanding and awareness of what is in the water and the possible risks, it is a benefit to the growers and consumers,” he says. The risk of illness from consuming raw or partially cooked oysters is greater for certain individuals with existing medical conditions.

He anticipates that the findings could provide participants and consumers with best-management practices in handling and refrigeration, as well as identifying the time of year when the virulent bacteria are more prevalent. “It’ll help growers and consumers make more informed decisions,” Jenkins adds.

Studying Vibrio in oysters is complicated and fascinating, Froelich notes. There is a limited amount of space in an oyster for Vibrio, and the bacteria compete with each other. “There’s almost a dance that’s going on with just these bacteria vying for space,” Froelich says.

That’s why Froelich samples the water and the oysters — what’s in the water might not indicate what is in the oyster.

To do that, Froelich is looking for under-dock growers to participate in his study. He will sample five oysters, recording water-related and other data.

Froelich has a personal interest in identifying safe oysters too. His father has health problems that have stopped his consumption of raw oysters. “I would dearly love to have safe oysters for him, and that’s a big part of what keeps me going,” he says.

“Scientists will say the best way to not get infected is not to eat oysters. While yes, that’s true, that’s not, in my opinion, the right way to go. We shouldn’t take something away that’s so enjoyable. Let’s make it safe.”

Under-dock growers interested in participating in the study can sign up and learn more at froelichlab.com.
This article was published in the Holiday 2016 issue of Coastwatch.