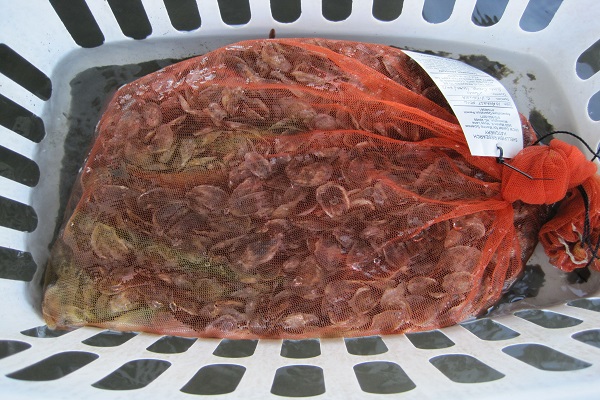 Phil Gagnon purchased this bag of spat for his fellow under-dock growers from the University of North Carolina Wilmington’s Shellfish Research Hatchery. Photo by Phil Gagnon.

How does Phil Gagnon’s garden grow? With silver fishes, and oyster shells in many rows.

To be sure, this Eastern North Carolina resident’s idea of a garden might be wetter than expected. He grows cages of oysters, sheltered
under his dock on Emerald Isle.

“It’s a boost to the environment and provides habitat,” Gagnon says. This gregarious man is quick to share his bivalve harvest with visitors — whether they are family, friends or strangers curious about his oyster garden — and to explain why, and how, he does it.

Gagnon and his wife Korin moved to Emerald Isle from Raleigh. They began by harvesting their own oysters from the wild or buying them from local sources. On a suggestion from Jim Swartzenberg, a former commercial shellfish grower, the couple started growing the bivalves themselves.

“I started with one thousand spat in three cages from Jim, using Styrofoam sheets inside the cages for flotation,” Gagnon recalls.

And things took off from there — aided by advice from other growers, Phil’s constant tinkering to perfect his growing system, and the help of an aquaculture class at Carteret Community College with Penny Hooper. “She needed one more person to get the class to go,” Gagnon remembers. Skip Kemp, Hooper’s successor at the community college, also gave pointers.

“We built our house here in 1994 to windsurf and ended up growing oysters,” Korin says. 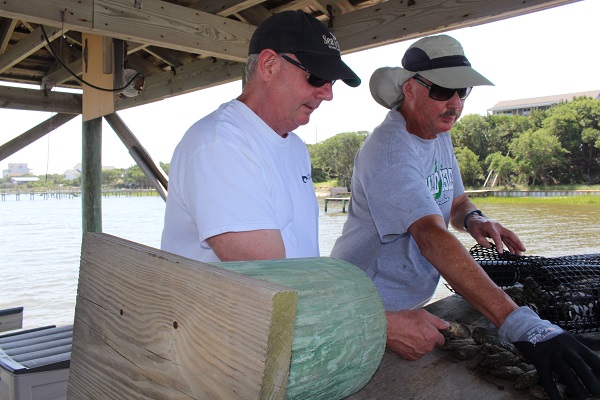 Oysters aren’t the only things Gagnon nurtures. He heads the Shellfish Gardeners of North Carolina, a group of enthusiasts who grow oysters under their private docks. Gagnon manages the website, oystergardenersnc.com, and acts as a mentor for the members.

He often invites newcomers to visit him. “I tell them to wear water shoes,” he says. They get a tour of his operation — the equipment he uses, how he cultures the oysters, and his secrets for securing cages and preventing fouling. He even stocks some cages and floats on hand to help them get started.

“It’s not as simple as tying a cage to a pier and then, one year later, eating oysters,” he warns.

The under-dock program started in 2004 and requires a permit from the N.C. Division of Marine Fisheries, or DMF. The permit must be
renewed annually.

“The ecosystem benefits and services, such as habitat and water filtering, that can occur increase as there are more shellfish in the water, although on a relatively small scale from under-dock growers,” says Shannon Jenkins, section chief of DMF’s Shellfish Sanitation and Recreational Water Quality. “Also, the program allows individuals to enjoy and consume oysters on a recreational level.”

“These gardeners are essentially cultivating oysters the same way as the commercial aquaculture industry, but on a smaller scale. And they have the same problems, including dealing with fouling of cages, mortality, and culling and splitting oysters as they grow,” Weirich notes.

He can assist new and established home growers on the basic steps for a successful under-dock effort, such as selecting suitable gear, determining stocking density and learning how to maximize the growth of oysters. 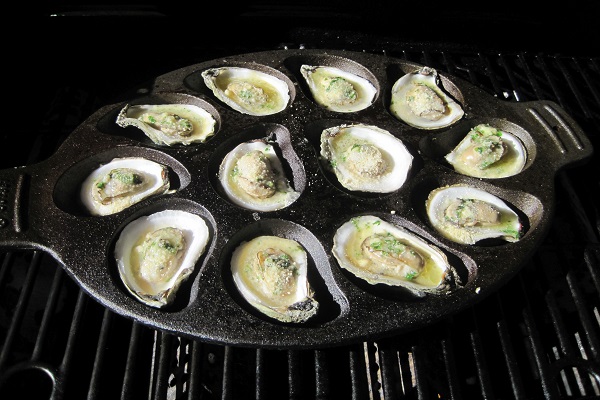 The couple takes great care and pride in serving their oysters to invited guests. Photo by Phil Gagnon.

“This is a great program and Phil is really working hard to build the community of under-dock growers in North Carolina,” Weirich says.

So far this year, Gagnon is having great success with what he calls “super spat” purchased through Ami Wilbur, director of the University of North Carolina Wilmington Shellfish Research Hatchery. She is developing several strains of oysters native to North Carolina intended to thrive in the state’s waters. According to Gagnon, Wilbur is doing it right.

“These oysters are just growing like crazy,” Gagnon says. “Ami is on to something. I hope she can keep supplying the club with spat.”

He bought 1,000 seed oysters from her in August and they doubled in size in five weeks. His fellow under-dock growers who also received the UNCW seed report great growth and survival rates too.

“I can’t say enough about what she’s doing,” he adds.

Ongoing partnerships with the oyster hatchery and commercial and recreational growers are some of the many Sea Grant efforts to develop the oyster industry in the state, as well as meet consumer demand for the delicious bivalves.

On the consumer end of the spectrum, the Gagnons also work to cultivate bivalve connoisseurs. When hosting dinners, the couple demonstrates how to shuck and prepare oysters, offers a selection of homemade dipping sauces, and pairs the oysters with specially selected homemade wines.