“I got really curious about snakes. I’d go to the library and check out books about them. I’d search the woods by my house for them,” she told a class of sixth-graders, many of whom wanted to know how a scientist could exist sans lab coat and erratic hair.

Albecker’s reptile fixation led to a college career in biology. But she eventually jumped to amphibians, partly for practical reasons. “Frogs don’t bite.” 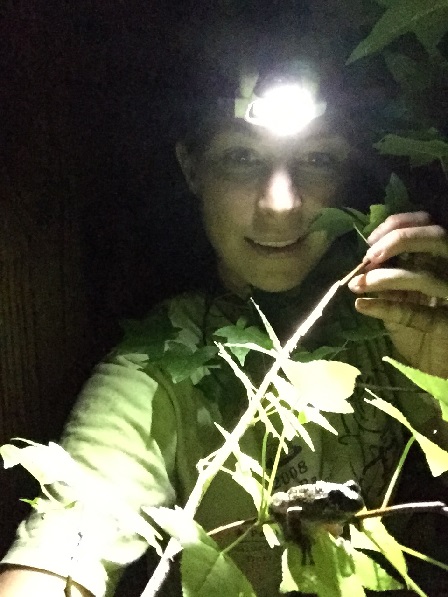 Molly Albecker provides lesson plans for elementary and high schools based on her research. Photo by Molly Albecker.

Before the talk, the students at Pamlico Middle School in Bayboro had trekked through the murky creek behind their school, digging through the muck to pull out alien critters and chasing tadpoles with nets. Some likely were questioning, perhaps for the first time, whether a career in science could be a possibility.

“Molly’s visit let the kids see what a scientist really looks like — that it’s real people doing real things,” notes Maureen Prendergast, the students’ science teacher. “The kids got wet, dirty, and actually did some real-life science, which is so much more valuable than sitting in the classroom reading about science.”

A doctoral candidate in coastal resource management at East Carolina University, Albecker has discovered the key to getting young minds hooked on science. She’s using tadpoles — little more than a mouth, gills and a tail, but soon able to leap out of the classroom tank.

“Many of the forecasts as far as animals and climate change are very gloom and doom,” Albecker notes. “They expect very high extinction rates as a result of climate change and development, but we’ve identified that maybe some of these species can adapt to the new conditions.”

It’s a message these researchers are having no problem conveying, because young and old alike respond to the charismatic green tree frog.

“When people hear about our work with the frogs on the coast, they’re very excited,” Albecker notes, “so we’re always looking for new ways to get the public involved.”

And they have managed to reach larger audiences with the help of programs such as the Scientific Research and Education Network, or SciREN, and the N.C. Science Festival’s Invite-a-Scientist efforts. Albecker thinks that people perhaps are initially attracted to the iconic frog, but they stay to learn about the curious process of its adaptation to change.

Frogs may not be the first thing to come to mind when the topic is climate change or sea-level rise. But with their fascinating metamorphosis, frogs can be a source of wonder to even the most seasoned of spectators.

Therefore, the researchers have been welcomed to extend their observations to wide-eyed audiences — particularly, to elementary and middle schoolers.

For some, the message is the value of biodiversity.

Using that perspective, the sixth-graders in Pamlico County explored the creek running on the school grounds. Equipped with waders and nets, they collected an assortment of creek-dwellers. 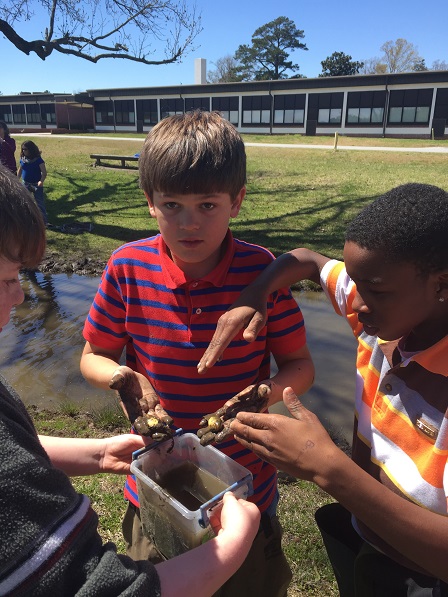 Teacher Prendergast and her students were surprised at the variety of tadpoles, minnows, snails and leeches that were uncovered from sifting through the familiar, yet murky, stream.

“Even the kids who didn’t want to get dirty and touch things, by the end of the period, were sifting through the bottom muck,” she says.

With curiosity piqued, the students wanted to know what else they might find, where the creatures came from, and how they got there — so much so that Prendergast repeated the jaunt later in the year. Comparing their discoveries led to a better understanding of the concepts of interdependency, biodiversity and even the food chain, Prendergast explains. Albecker added plans to revisit Prendergast’s classroom in April.

For others, witnessing the oft-forgotten, surreal cycle of metamorphosis becomes a lesson.

After a pre-K class at Oakwood School in Greenville collected tadpoles for their classroom, McCoy visited the students as they reared the juvenile frogs, explaining the changes that the class was seeing.

Students watched as the tiny tadpoles lost their gills, developed teeth and legs, reabsorbed their tails and eventually emerged from the water to breathe air through their moist skin and lungs.

Interest has even trickled up to Virginia, where a first-grade class in Leesburg used Albecker’s lesson plans to conduct a live demonstration of the amphibian life cycle using frogs.

Albecker explains that the elementary-school lesson plans, developed for SciREN networking events, include information on where to find and how to see frogs outside of a classroom, along with activities for teaching the life cycle. These materials assisted the Leesburg class in collecting and raising tadpoles during spring 2015 to learn about frog development.

“That is a great example of why North Carolina Sea Grant funds the SciREN lesson plan workshops. It is a great way for our research teams to connect with teachers and students,” notes John Fear, Sea Grant’s deputy director.

Undergraduate students also are drawn to these vibrant, neon-green frogs for reasons of their own — including for independent research projects.

Six undergraduate students at ECU, in search of hands-on research, have sought out Albecker for ways to get involved. Three of those students have conducted individual research to supplement her Sea Grant-based study, with the other three assisting with field work.

One student dissected the stomachs of frogs used in the initial study, examining the contents to determine if coastal frogs have adapted to new or different food sources. Another used florescent dye to stain the skin, kidney and bladder tissues of both inland and coastal frogs to identify the presence of proteins associated with water and salt regulation.

A third student, concerned with how salt affects individual competition for space and food resources, studied tadpoles to determine if salt changes the way the young frogs survive and develop over time.

“These research projects give students a sense of the actual processes involved in doing science,” McCoy explains.

“The experience of actually seeing how science is done, how you approach problems that no one knows the answer to, and figuring out new information is what’s really valuable for our students to experience,” he adds.

He notes that even if the students don’t end up in a science career, they’ll still take away the knowledge of the scientific process, and the certainties and uncertainties involved in trying to find new knowledge about how the world works.

“It’s about giving them the experience of how you ask a question, and how you actually ascertain knowledge that was previously unknown — that’s the most important thing,” he notes.

“So far, we’ve found that populations of frogs living at the coast are different,” Albecker says of the Sea Grant-funded project. “Results show that these frogs are likely becoming locally adapted, so essentially, they’re evolving to tolerate higher salinities compared to frogs that don’t encounter salt.” 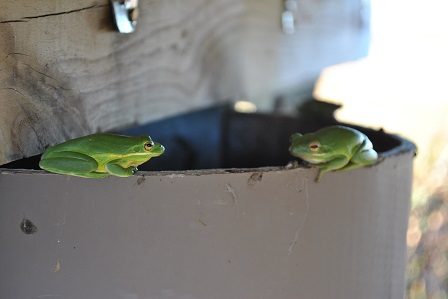 The green tree frog has shown the ability to thrive in habitats of higher salinity than other frog species. Photo by Molly Albecker.

Sea Grant’s Fear notes that Albecker and McCoy’s results could be valuable to wildlife management organizations and other scientists.

“The N.C. Wildlife Resources Commission and the U.S. Fish and Wildlife Service are two agencies that would be interested in the results from this study. Amphibians are sentinel species for ecological change. These frogs are an interesting example of how our coastal animals may adjust as salinity levels increase,” Fear says.

Though the ECU team originally was interested in studying all species of frogs found along the coast, the green tree frog, or Hyla cinerea, quickly became the focus. Team members discovered it living, and thriving, in saltwater marshes of relatively high salinity, which Albecker describes as about 20 parts per thousand. In comparison, the salinity of fresh water can be as low as 0.5 parts per thousand, while seawater is 35 parts per thousand.

Albecker explains that a female frog will “taste” the water around her when choosing where to lay her eggs in order to sense the presence of predators or other adverse factors, such as salt. The presence of salt generally has meant little to no hatching or survival for offspring. So inland populations of frogs avoid laying eggs in salty water. 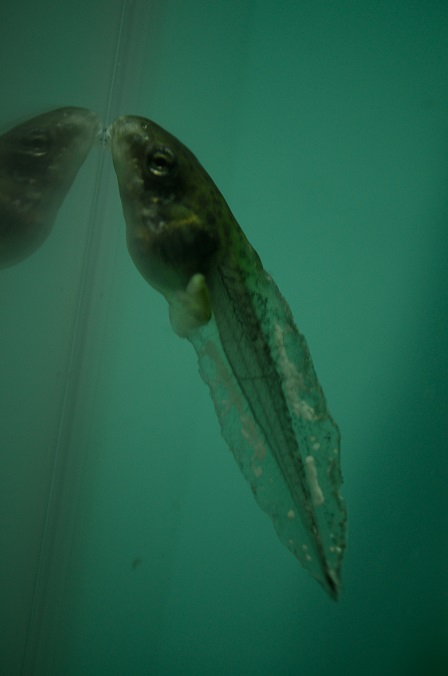 However, coastal populations aren’t avoiding salt. The researchers found that coastal females have a much higher hatching rate in pools of higher salinity compared to frogs from inland settings.

Their other data show that coastal adult frogs are able to regulate their internal water balance better than those inland.

McCoy explains that frogs generally lose much of the water inside their bodies when exposed to salt. Coastal populations, however, are displaying the ability to tolerate salt and maintain their internal water balance.

Results also show that compared with inland populations, coastal species of frogs may hatch and mature much faster in their saltwater habitats.

McCoy notes that amphibians are a unique case in which to study the effects of sea-level rise. There are no known marine amphibian species, and therefore the class contains very few examples of adaptation to salt water.

“The mechanisms that allow the frogs to persist in salt habitats are not only shared by most vertebrates, but in a broader sense, most organisms,” he explains. Therefore, the researchers hope that through determining how amphibians might adapt to rising salinities, the knowledge will be helpful in understanding what may happen to other species as well.

Maybe even to snakes: an icon that might excite the public in a much different way — and one that Albecker might be eager to revisit.