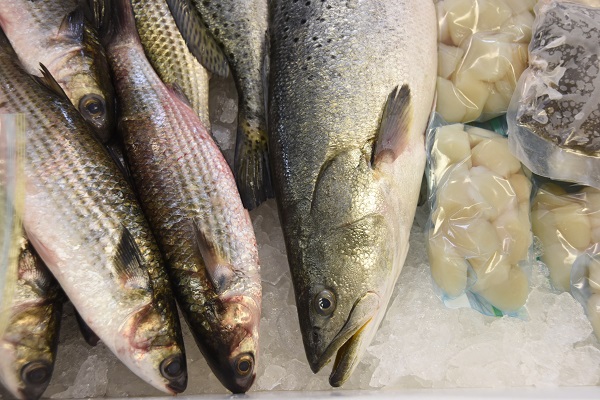 In February, she led a seafood industry group on a whirlwind trip through Wanchese, Hatteras Island, Ocracoke and Carteret County. Participants hailed from the east and west coasts of the United States, the Great Lakes, Hawaii, and even Canada.

Some were looking to start a community supported fishery, or CSF. Others already are running successful ventures — such as developing applications to help fishermen connect with consumers. 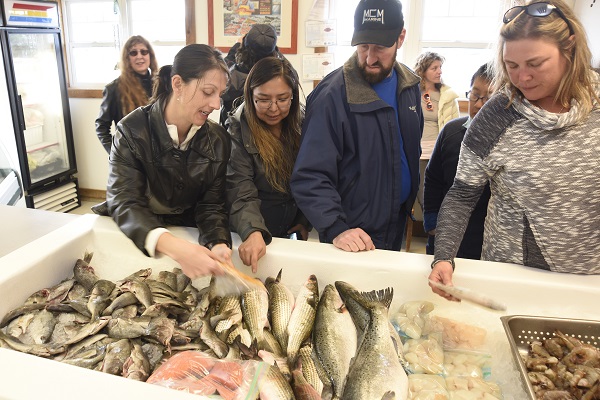 To get an idea of how people in the North Carolina seafood industry were marketing their products, this select group chose to join an optional field trip of North Carolina’s coast, held after the Local Seafood Summit in Norfolk, Virginia. The summit was hosted by LocalCatch.org, an organization that focuses on sustainable seafood through direct marketing.

“I wanted to show the group North Carolina’s working waterfronts and what the seafood industry is doing to bring more value to their catches. But, I also made sure to point out different historical, cultural and natural assets along the way,” Mirabilio says.

The group visited fishhouses, seafood markets and watermen’s museums. They also dined at restaurants committed to serving local seafood and chatted with the chefs.

Speakers were on hand during the tour to share their experiences. They represented what Mirabilio refers to as the “movers and shakers in the retail seafood world” in North Carolina.

“Everyone who participated was impressed and very pleased that people from all over North America had taken the time to visit and learn about North Carolina’s fisheries and seafood marketing,” says Ann Simpson, director of N.C. Catch.

A statewide seafood branding and education initiative, N.C. Catch helped to organize the Ocracoke and Carteret County portions of the tour.

“I had a tremendously good time showing this hugely diverse group the good things happening with local seafood in North Carolina,” she says.

A week after the tour, Simpson returned to one of the stops. “The staff was still so pleased that the field trip group had visited the restaurant,” she recalls.

“There was a two-way dialog between speakers and the tour participants,” Mirabilio explains. “Those on the trip made a lot of connections.” She noticed efforts to build new partnerships among speakers and participants, as well as networking among the individuals on the tour.

“It wasn’t just instructional, it was oral history,” says tour participant Joe Falcone. The speakers shared lessons that were “packed with personal stories — what life is like there, how things have changed.”

Falcone, who lives in Half Moon Bay in California, is developing FishLine, an app that allows fishermen to notify consumers about the day’s catch. Retail stores and restaurants also use the application to announce their daily offerings. 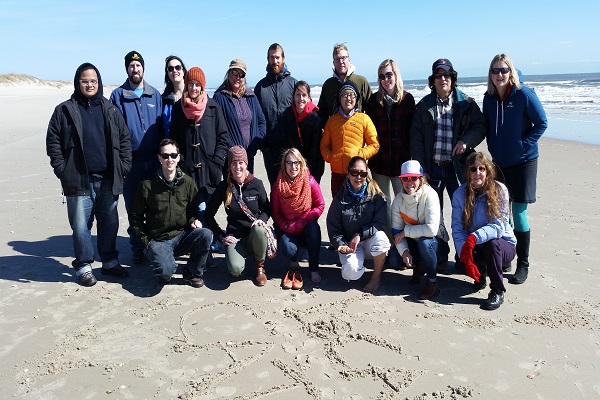 The group consisted of people from the United States and Canada. Photo by Jack Thigpen.

“More than information, the tour gave both sides an opportunity to talk about what was going on,” says Andrea Tomlinson, general manager of New Hampshire Community Seafood.

Extending her stay to include the tour was a simple decision. “I wanted to see what the working waterfront looked like in North Carolina,” says Tomlinson, who once spent a summer in Nags Head.

“I like having fishermen’s perspectives from different areas of the country,” she notes, adding that New Hampshire could learn a lot about how to promote local seafood from North Carolina.

Sabrina Williams from Yukon, Canada, is looking to start her own CSF. Along with her 5-year-old son Levi Williams and common-law spouse Jared Strasdin, she harvests mainly king, Chinook and coho salmon from the Taku River, which runs through Alaska and British Columbia.

Williams is a member of the Taku River Tlingit First Nation, and the river is part of her people’s traditional land.

“The tour gave me a chance to meet other fishermen,” she says. It also helped her recognize common experiences, such as keeping abreast of changing regulations and market conditions.

The local seafood event — including the conference where she swapped tales of seals poaching salmon with an Australian fisherman — was a confidence booster.

“I’m coming to the realization that I’m already doing a lot,” Williams explains. “It was a pretty good start to the year.”