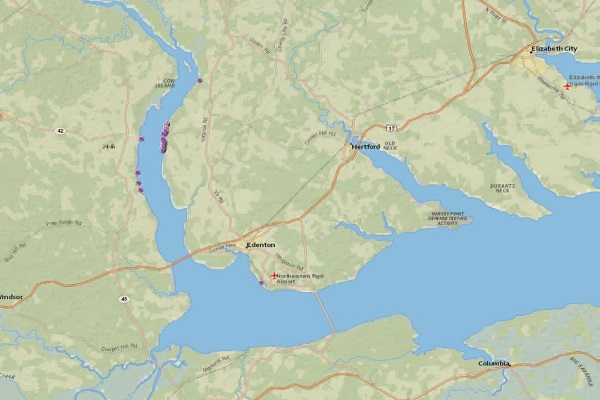 Purple dots mark the presence of Hydrilla during the 2015 survey. Photo by Gloria Putnam.

Spring flowers aren’t the only thing arriving with warmer weather.

In many water systems throughout the state, the invasive Hydrilla verticillata waits for its chance to break to the surface once again. 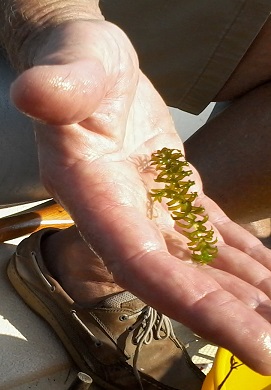 Hydrilla awareness also has increased in recent years, as have efforts to control and manage it. Last year, partners from state and local agencies met to discuss the plant in areas around the Albemarle Sound. Some members formed a Technical Advisory Group to develop science-based recommendations to address Hydrilla management in the watershed.

“The data sharing and discussions happening in the advisory group allow new ways of thinking about Hydrilla movement in this complex ecosystem,” says Gloria Putnam, North Carolina Sea Grant’s coastal resources and communities specialist. “Events like salinity spikes and algal blooms could help limit the spread of this plant.”

This effort illustrates the increased collaboration among state and local government agencies, universities, and community partners to combat Hydrilla in the state. The group brings together local on-the-ground professionals with experts in invasive species and ecosystem management. (See box on page 28 for a list of participating agencies.)

The resulting recommendations reflect the importance of an integrated data collection, research and treatment strategy in successfully controlling the spread of Hydrilla, Putnam explains.

The advisory group recommends that annual Hydrilla surveys in the region be continued for at least the next five years, but with a new focus. Instead of just confirming the presence of Hydrilla, new surveys also will determine the extent of infestation.

The surveys depend on citizen scientists to assist with data collection. The volunteers often have a vested interest: Hydrilla grows quickly and profusely, limiting activities, such as boating, paddling and swimming, and even altering habitats in larger bodies of water. 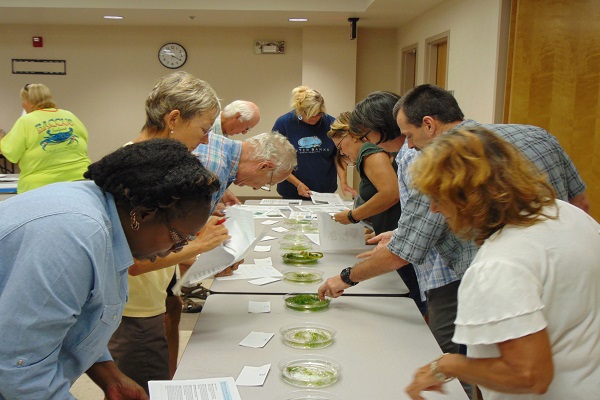 Volunteers test their ability to identify Hydrilla at a training event. Photo by Scott Alons.

The advisory group suggested volunteer training start earlier each year so the participants have more time to conduct the surveys while Hydrilla growth is at its peak. Additionally, the advisors are developing a standardized reporting format for surveys that could be used by all participating agencies.

Many of the recommendations were based on results of survey work done in the Albemarle Sound and nearby rivers. A map of Hydrilla sightings from the 2014 and 2015 surveys is available online and will be updated annually.

“These maps provide yearly snapshots of the extent of Hydrilla in the Albemarle Sound watershed,” Putnam explains.

“The Albemarle Sound watershed is so vast. We need other people who are out on the water to get engaged with our work and report new sightings. These new directions will step them through the process. In addition to Hydrilla, they also can report other invasive plants through the EDDMapS tool,” Putnam adds.

To learn more about Hydrilla, see the results of survey work and report your own sightings, visit ncseagrant.ncsu.edu/hydrilla. For questions, email Gloria Putnam at gloria_putnam@ncsu.edu.

Members of the advisory group represent the following organizations: