In the last few months of the year, North Carolina Sea Grant bade farewell to Sandra Harris, on our communications team, and Vanda Lewis, on our extension team.

But truly, they both were key to all of Sea Grant’s work.

Combined, they had served the state for 67 years. Here, we share appreciations of our former colleagues.

Scroll down for stories about each colleague. 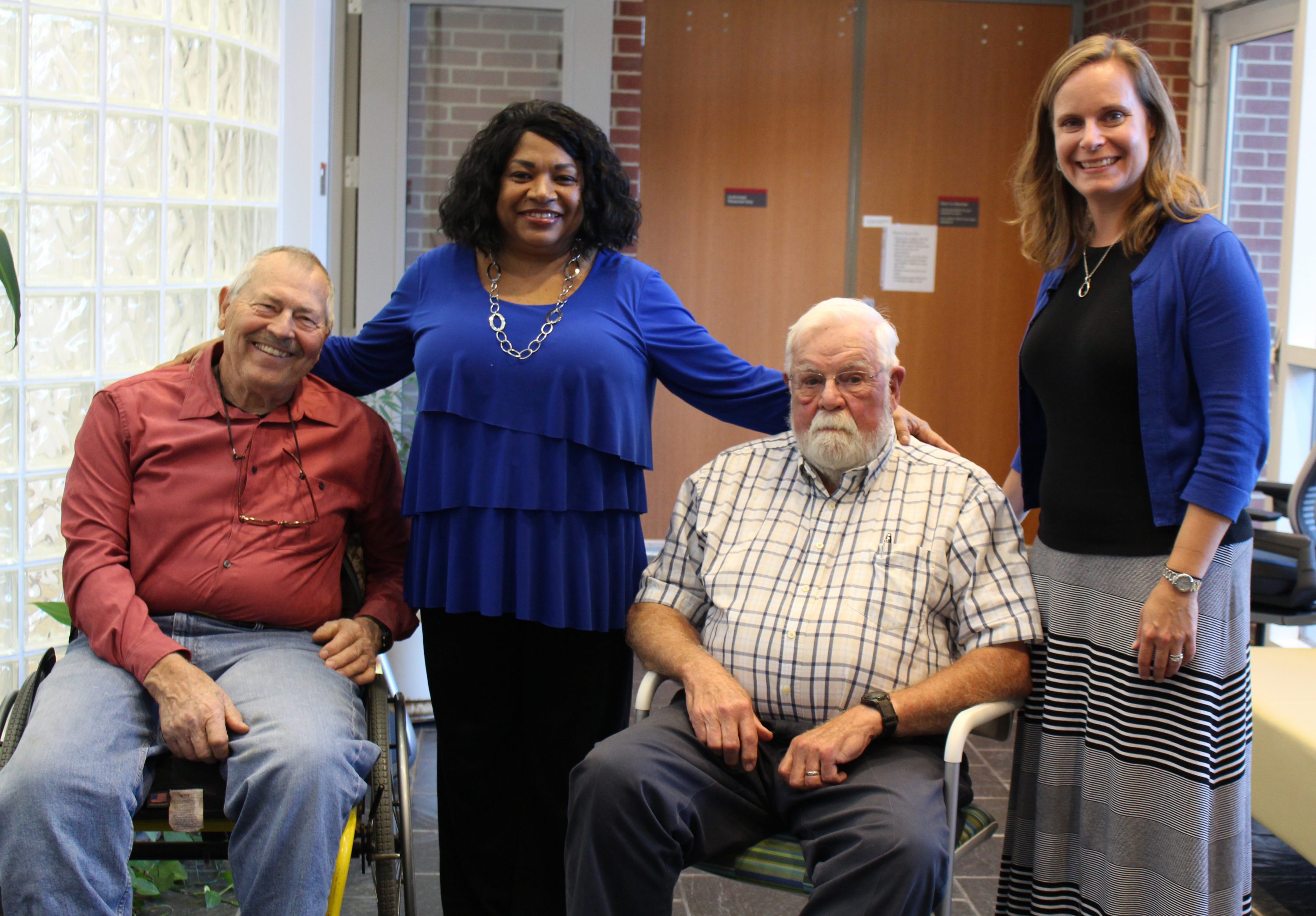 AN EYE FOR THE DETAILS: HARRIS SERVES SEA GRANT, STATE

When Sandra Harris arrived for her interview at NC State University in 1973, her top scores on typing and shorthand tests already had impressed her soon-to-be boss, Hardy Berry.

“He said: You’ve got to get a start somewhere,” Harris recalls with a laugh. She joined Berry in the university’s information services and communications office, taking dictation and typing letters and news releases.

That quick start led to a strong career — and membership in the Order of the Long Leaf Pine, the State of North Carolina’s “highest honor of recognition.” Signed by Gov. Roy Cooper, her certificate notes his “special confidence in the integrity, learning and zeal” of Harris, who retired in October with a total of 37 years of state service, including 23 with North Carolina Sea Grant.

Susan White, current Sea Grant executive director, and other directors during Harris’ tenure agree with the citation. “I have counted on Sandra’s attention to detail,” White says.

“Sandra’s focus on advance planning ensured that actions were completed in clear, efficient and cost-effective ways,” she adds, noting that those tasks have included more than a few reminders to the management team regarding delivery deadlines for materials being shipped out, or catching grammatical errors on letters.

That attention — and accuracy — had been clear even early in Harris’campus career. “I was good at proofreading,” she notes with a smile.

After taking some years away from the office to focus on her family, Harris worked for a while at Nationwide Insurance, where she always exceeded the daily quotas for her position. Despite offers to move up in the business world, she missed the atmosphere of the university.

She returned to campus in 1994, joining Sea Grant. B.J. Copeland was director at the time. “Sandra always has been very reliable. She’s been very capable. She always gets her job done,” he says. “It’s been a really great thing for Sea Grant that she’s been here.”

Ronald Hodson succeeded Copeland as director. He recalls Harris’ ability to easily adapt, be it to changes in the program’s leadership, or to technology advances, such as new database software and the increasing importance of the Internet for sharing research and outreach information.

“I like working on computers,” Harris says. At times, posting text and photos for online stories was like assembling a puzzle. She also often used detective skills to track down information needed by colleagues, partners or the public.

“I always was amazed by how efficient Sandra was. She seemed to know what I was going to request, especially with posting materials online, before I asked,” says E-Ching Lee, former managing editor of Coastwatch. “I also counted on her attention to detail. Sandra’s eagle eyes have caught many errors in our stories and products.”

Harris enjoyed being part of the Coastwatch team. “I like the stories about the people,” she says. Favorites include a profile of Muzel Bryant of Ocracoke, and articles on the storytellers and fish house owners of Carteret County. “I love the recipes,” she adds.

Sometimes the work was intense. Harris played a key role in the national distribution of seafood safety manuals for a number of years. Tat effort “took over my life,” she recalls.

In 2004, she was selected by NC State’s then Office of Research and Graduate Studies to move to the university level of the Award for Excellence competition. Now known as NC State’s Office of Research, Innovation and Economic Development, that office is administrative home for Sea Grant.

With expansion of her Sea Grant communication duties, Harris’ official job title was updated in 2015 to university program associate. Her duties also have included managing distribution for Coastwatch and varied publications, and serving as a key contact for the National sea Grant Library.

But at a retirement reception for Harris, coworkers past and present especially wanted to note her kindness. “Her friendly nature has been an asset to the team,” Hodson says.

Harris had immediate plans for a special vacation with her husband. The beach has a special lure, she says. “I love walking in the sun.”

A graduate of Broughton High School in Raleigh, Harris has strong ties to the community. And her days now also will have a greater family focus, in particular spending more time with her mother and 14 grandchildren.

Overall, she will enjoy setting her own schedule — and maybe even some time for herself. “I may renew my membership in our bowling league,” she adds. 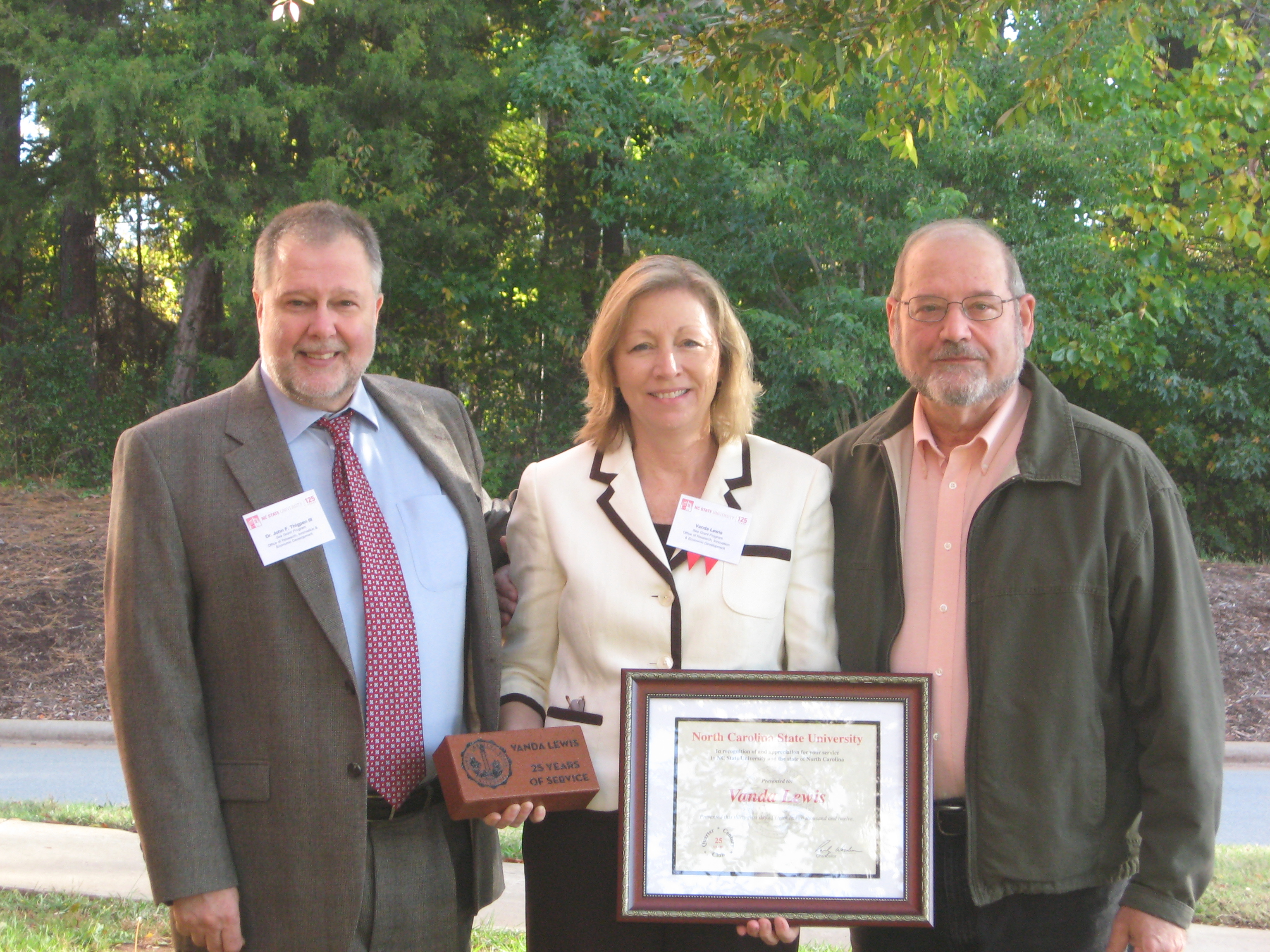 DRIVING INTO THE SUNSET: NEW ADVENTURES BECKON AFTER RETIREMENT

Vanda Lewis likes to stay in the background. Officially, she is an administrative support specialist for North Carolina Sea Grant, based in Morehead City.

But that’s just the tip of the iceberg. Colleagues have described her as organized, efficient, talented, trustworthy, committed, positive and supportive.

If you’ve seen Sea Grant’s food photographs in Coastwatch magazine or on mariners menu.org, you’ve glimpsed her work. If you’ve signed up for aquaculture workshops, worked on the N.C. Fishery Resource Grant program or visited the Sea Grant table at the N.C. Seafood Festival in Morehead City, you’ve likely crossed paths with Lewis.

“She’s always the first to say, ‘What do you need? How can I help?'” says Barry Nash, Sea Grant seafood technology and marketing specialist.

Having grown up in a family with deep roots in Down East Carteret County, Lewis brings authentic flavor — figuratively and literally — to her work. Her knowledge of the cultural institutions, history and traditions of the area’s fishing heritage enriches the program’s efforts. She has written popular blog posts to share recipes learned from her mother and mother-in-law, and her way of life growing up Down East.

“My background has an impact on my work,” acknowledges Lewis, a Harkers Island native. She is out on the water regularly with her husband James, who holds a commercial fisherman’s license.

“We have shrimped, clammed and fished. It gave me an appreciation for how hard the fishermen work. It’s a hard living. I just appreciate what they do a lot more having done it myself,” she explains.

“Vanda has made our program more efficient and effective because she understands the content we’re working on and also can explain the impact we have on other’s lives,” says Jack Thigpen, Sea Grant extension director, pointing to her ability to make sense out of random ideas or data.

Jim Murray, Sea Grant extension director prior to Thigpen, notes that Lewis brought an intangible quality to the table. “Overlying her skill set was a lifelong commitment to the Sea Grant organization and philosophy. Vanda very much understood that Sea Grant serves the public and she truly gave of herself with an unselfish spirit of public service.”

Her commitment to improving workplace morale is evident to others. “Vanda takes time out of her busy schedule to check in with me on both my work and family,” notes Jeff Buckel, a fisheries biologist at NC State’s Center for Marine Sciences and Technology. “She has been the face of Sea Grant to our laboratory in Morehead City, and to groups residing in or visiting the coast.”

Lewis has been a point person for Sea Grant’s collaborations at the central coast. That area is home to university marine science labs; offices of state and federal agencies; an aquarium, museums, parks and reserve; and countless state and local organizations and businesses that collaborate on events, projects and initiatives.

Nash singles out Lewis’ contribution to the Mariner’s Menu blog. She prepares, photographs and posts recipes for that site.

“She combines her knowledge of seasonal information about seafood and her own cooking expertise to make sure a home cook could do it. That’s huge because many people like to eat seafood, but they don’t know how to prepare it,” he explains.

Nash notes that Lewis also has developed seafood recipes for coastal processors who wish to sell prepared foods made with local ingredients. She ensures that the favor, texture, aroma and appearance of items appeal to a broad range of consumer expectations.

“Vanda’s expertise in this area far surpasses my own,” he explains. “She has truly helped enhance the visibility of North Carolina seafood and the state’s commercial fishing industry to our citizens.”

However, all good things come to an end: Lewis retires at the end of 2017, the same time as her husband James. “It was a hard decision,” Lewis says. “I’ve worked 30 years. Initially I wondered what I was going to do to fill my day but James solved that.”

The pair has plans to drive off into the sunset in their brand-new RV. She hopes to find new images to capture with her camera — and maybe blog about the sights she sees.

“I’ve learned new and more things, been exposed to a lot of different things about environment and fisheries and grants. So I’ve learned a lot along the way,” Lewis says about her three decades with Sea Grant. “I’ve always tried to accept changes that have come, and challenges. And go with it.”

And this time, the changes might be in the scenery outside her RV window as Lewis navigates her way to new adventures and sights.