Gaining an Education on the Water: Appreciating the Forces of Nature 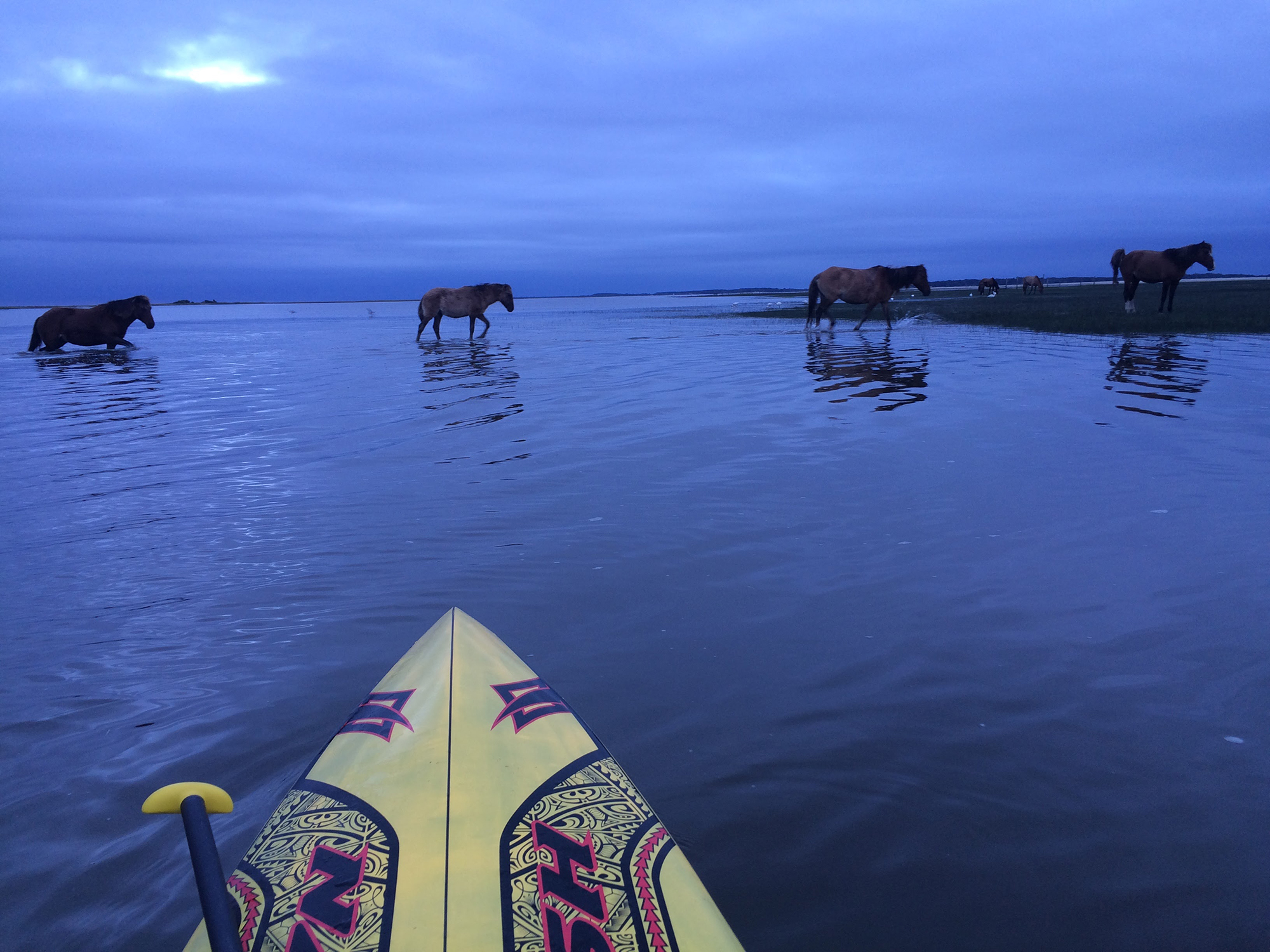 There’s a lot to be learned from a trip out on the water.

At work and in regular, everyday conversation, I constantly talk about changing water levels, tide gauges, coastal inundation and relative sea-level rise. To really understand what these words mean, I’ve found it best to get outside — and on the water — to experience natural resources and the factors that affect them.

Always a water lover growing up in a Great Lakes state, I found more to learn when I moved to the N.C. coastal town of Beaufort almost six years ago. With beautiful waters beckoning to me daily, I have taken advantage of my location to take more kayak, stand-up paddleboard and sailing trips out on the water than I can count. 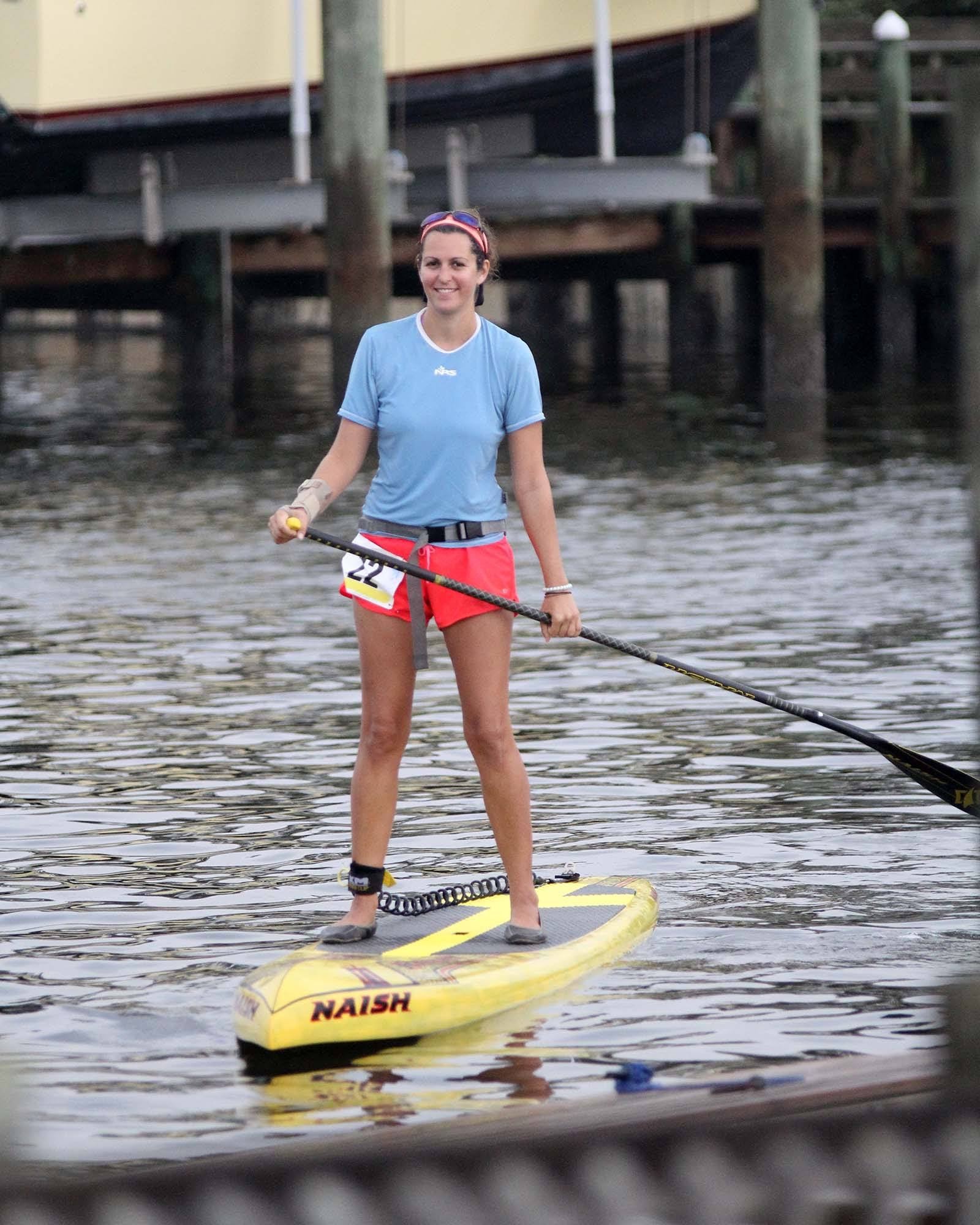 One of the most important friends I’ve met here is known simply as “the tide.” I quickly realized that the tide is here to stay whether I like it or not, so it’s best to make friends if possible.

The tide usually is a predictable friend. I know it will change course about every 6 hours and 12.5 minutes, due to the incoming, or flood, tide and outgoing, or ebb, tide. Sometimes the tide is bigger than normal (higher high tides) or smaller than normal (lower low tides).

Sometimes I wish the tide would change its pattern based on where I want to paddle that day. Paddling while fighting the tide AND the wind can take all the energy I have.

The natural tidal rhythms, originally passing acquaintances, have become close friends. I always want to know what the tide is doing because how it changes will influence where I go on the water, the energy I will need for that day’s paddle, and what I might see. Depending on the time of day and water level, a habitat such as salt marsh can look completely different. Marsh vegetation and oyster reefs may be exposed at low tide or completely covered and hidden at high tide.

I’ve lost a few flip-flops to this friend. Once, I almost lost my kayak and paddle, when they started to float away while I was on the other side of the sand bar behind the Rachel Carson Reserve, enjoying a day out on the water with friends. One of my companions turned back and rescued our kayaks just in time before they floated out to sea.

Another challenge is coming to terms with the wind, a companion that constantly changes while out on the water.

Wind speed and direction seem minor on a Friday night while sheltered from the elements in my house. But those factors become very relevant Saturday morning when sitting in a small paddlecraft exposed to the elements. It is a fun coincidence that the Beaufort Wind Force Scale, that estimates wind speed by observing conditions on land or at sea, has the name of my town. The scale was actually named after Sir Francis Beaufort in 1805.

I’ve learned to respect the wind as I have the tide. Rather than fighting it, I know the importance of working smarter, not harder. This often means getting out of the wind by heading for the “lee” side of the island where the wind is blocked. Paddling close to shore can be safer as well, because there often is less current — and less boat traffic. 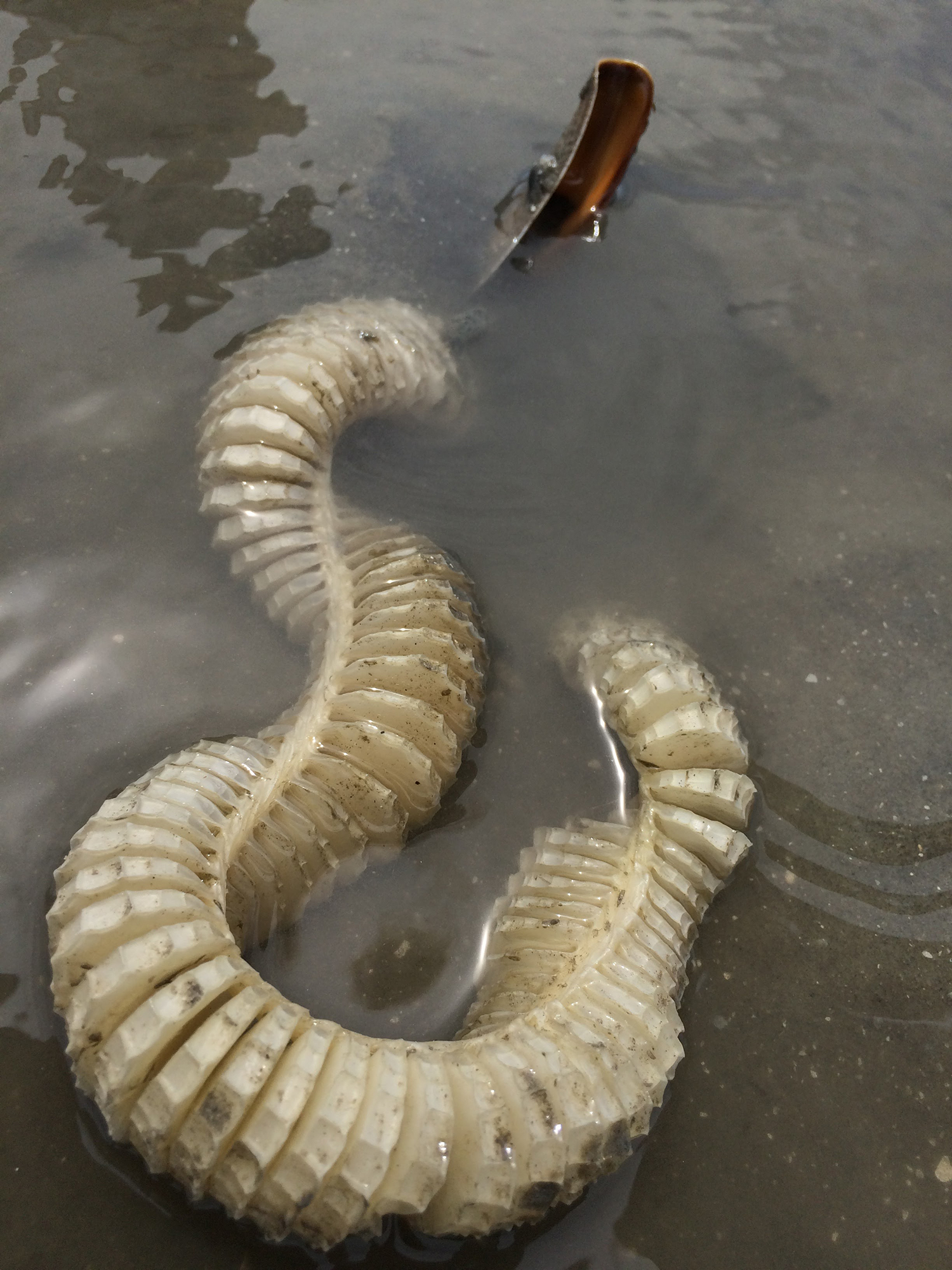 A whelk lays its eggs in a shell case at the Rachel Carson site of the N.C. Coastal Reserve. Photo by Sarah Spiegler

Paddling vessels take you to the next destination, employing exclusively human power. One of my favorite parts of paddling is the ease of getting under way using my own strength. I also love the sense of accomplishment when propelling myself to explore new places, often sites unreachable and unobservable to someone in a motorboat.

It is when I paddle back to shore under human power — against the wind, tide and current — that I learn the most about how the natural elements and the coastal environment are interwoven. Returning home after a challenging paddle and battling the elements, I feel like I have allowed Mother Nature to teach me to have respect for something I cannot control.

One of the most inspiring parts of being an instructor for the American Canoe Association, or ACA, is teaching people while they are out of their comfort zone. I’ve seen many paddle students persevere, overcoming the pesky forces of wind, tide, current and inclement weather. I enjoy witnessing a novice gain new confidence from something as simple as hopping on a kayak or a stand-up paddleboard.

Earlier this year, I led University of North Carolina Wilmington students on a 10-mile round-trip paddle from Shell Point at Harkers Island to the Cape Lookout Lighthouse. I was proud to see these students, many with minimal paddling experience, accomplish this daunting feat. The wind and current picked up on the return trip, when many were fighting fatigue, while making their way in an unfamiliar and sometimes harsh environment. Just as important, these students, many who were environmental studies majors, learned about coastal resources in an outdoor setting after a semester in a classroom. Rad.

One of my favorite lines in a 2017 Paddling Trip Guide article by Rapid Media says, “Every time we paddle, we go on a trip … there is a going out and a returning home. We never return the same person that we left.” 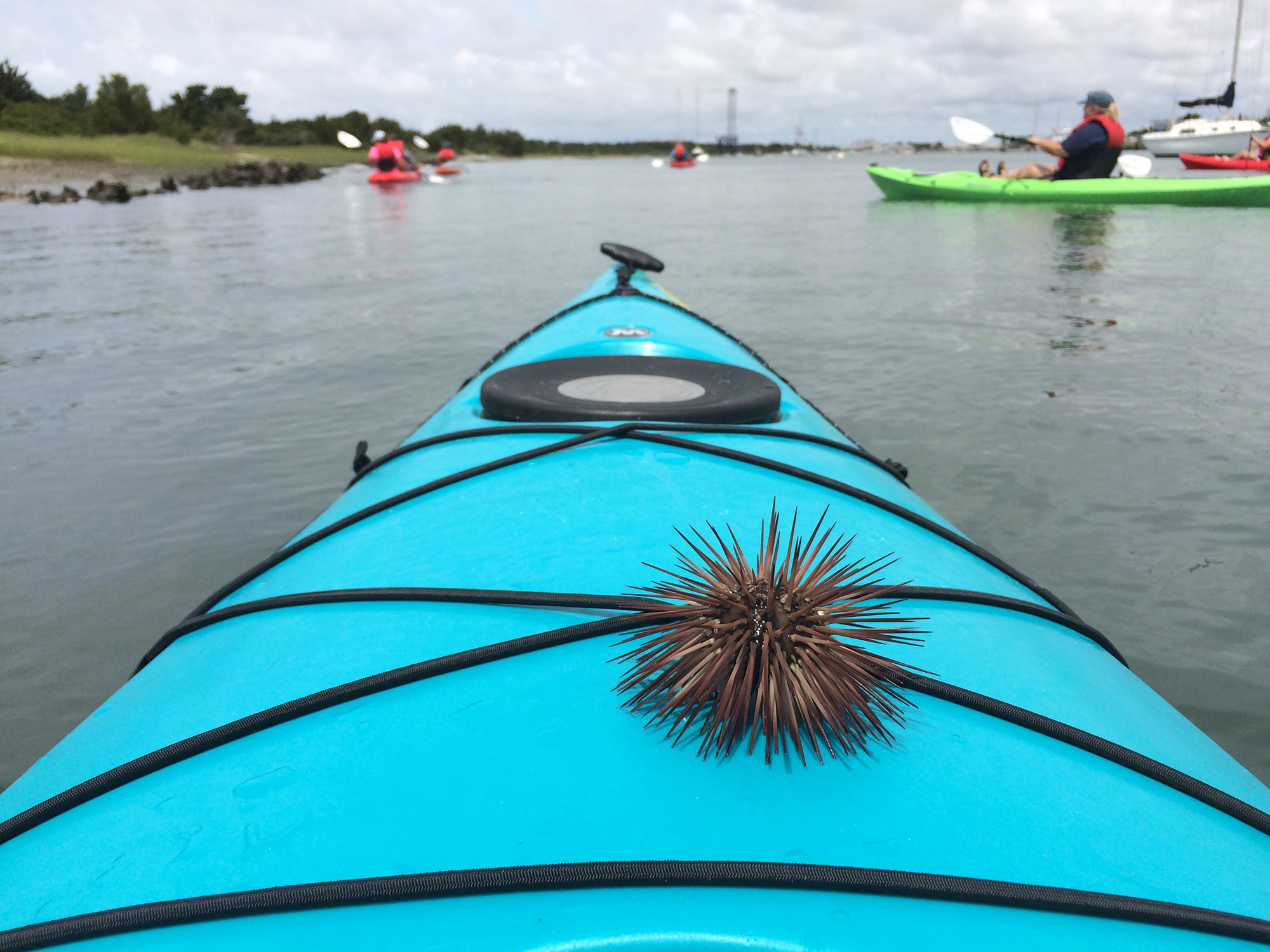 Spiegler’s kayak lets her get up close and personal with aquatic life, such as this sea urchin along the central coast. Photo by Sarah Spiegler

I have been fortunate to introduce many people to the beautiful waters of “my front yard.” I am lucky that I can see a small sliver of the water of Taylors Creek peeking between houses across the street. A 30-second walk out my front door allows me to check on my friends the tide and wind.

A short paddle across Taylors Creek leads me to the Rachel Carson Reserve, a 2,300-acre island that is strongly influenced by the tides. Part of the N.C. Coastal Reserve and National Estuarine Research Reserve, it is home to over 200 species of birds, approximately 35 wild horses, a variety of fiddler crabs, foxes, rabbits, snakes, racoons, turtles, fish, snails and sea urchins, and an assortment of marsh grasses. Many people regularly venture out to the reserve for a day trip.

From a neighbor’s porch, I can spot the waters of Back Sound on the backside of the Rachel Carson Reserve. Back Sound flows between the reserve and Shackleford Banks, a barrier island shielding Beaufort from the Atlantic Ocean. One of the islands in Cape Lookout National Seashore, Shackleford Banks measures approximately eight miles from its western tip to its eastern end. Shackleford has lost about a mile of land on the western end over the past four years due to erosion. The eastern end of the island is separated by Barden Inlet from South Core Banks, home of the Cape Lookout Lighthouse.

Cape Lookout National Seashore includes Shackleford Banks, South Core Banks and North Core Banks, which together comprise over 50 miles of undeveloped ocean shoreline. It is a calm and serene place, ideal to experience a changing wilderness. This incredibly unique island chain is hands down my favorite place anywhere in North Carolina. And it’s also a great place for paddling.

The national seashore is a barrier island chain, so it is influenced by the elements — tides, currents, wind and storms. The islands are constantly changing and never look the same each time I go. Because of the protections afforded when Cape Lookout became a national seashore in 1966, there are no roads on the seashore, no housing developments and no bridge to reach its islands from the mainland. We are allowing this island chain to change in a dynamic way like Mother Nature intended. 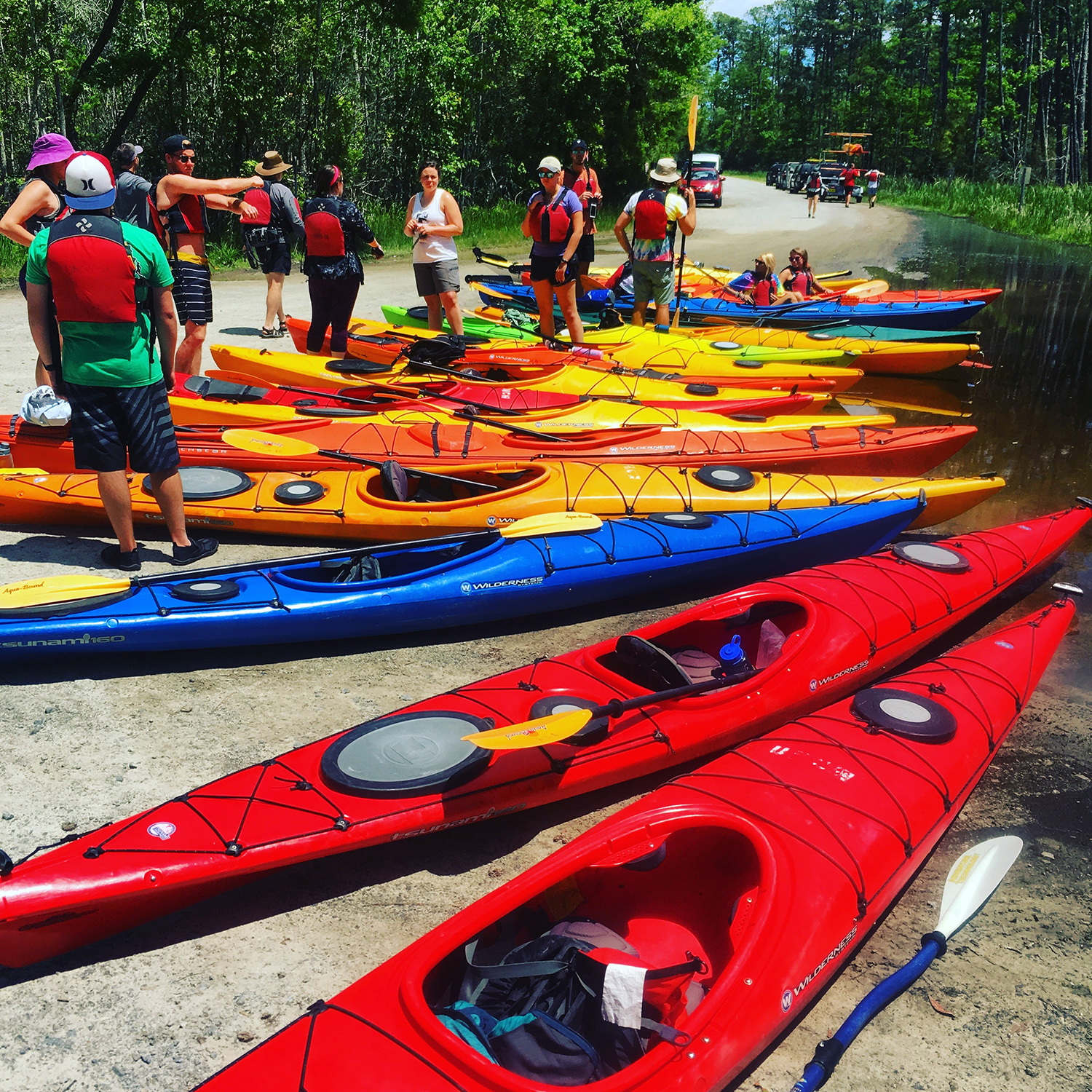 Sarah Spiegler led a group of students from the University of North Carolina Wilmington on a paddle trip through the Alligator River National Wildlife Refuge. Photo by Sarah Spiegler

In a trip to Cape Lookout, I can feel the tide of history from the remnants of long-gone communities. Shackleford Banks is home to over 120 wild horses called banker ponies that are believed to be descendants of the horses that survived Spanish shipwrecks in the 16th century.

In the 1800s, the best-known community was Diamond City — named after the diamonds on the Cape Lookout Lighthouse. The predominantly whaling and fishing community occupied the east end of Shackleford Banks. Residents were forced from the island by hurricanes at the end of the century and many fled to Morehead City, a reminder of the harsh and ever-changing nature of a barrier island. A cemetery located in the middle of the maritime forest on Shackleford holds the remains of many of those who once called the island home.

Now a museum, the Cape Lookout Lighthouse quarters once housed lightkeepers who lived in a harsh environment before modern conveniences. These resilient and gritty sentinels kept the oil burning daily to light the Fresnel lamp, climbing 201 steps to the top of the lighthouse from 1812 until 1950, when the light was automated.

Now, only wildlife are resident on the National Seashore islands. Human visitors can swim, fish, bird, shell, hunt, boat, paddle, sail, hike and camp on these islands. Some spend the night sleeping in a tent bathed in the light of the Cape Lookout Lighthouse or nestled into the maritime forest of Shackleford Banks. One of my favorite sights while sitting around a campfire at “Shack” (as Shackleford Banks is affectionately referred to by locals) is the sight of a herd of wild horses trotting quietly down the beach.

Just writing this makes me excited for the next time I can venture out on my next paddle trip.

State and national parks, along with reserve sites, offer many opportunities for paddlers of all skill levels. These are my favorite paddle trips in my “front yard”: 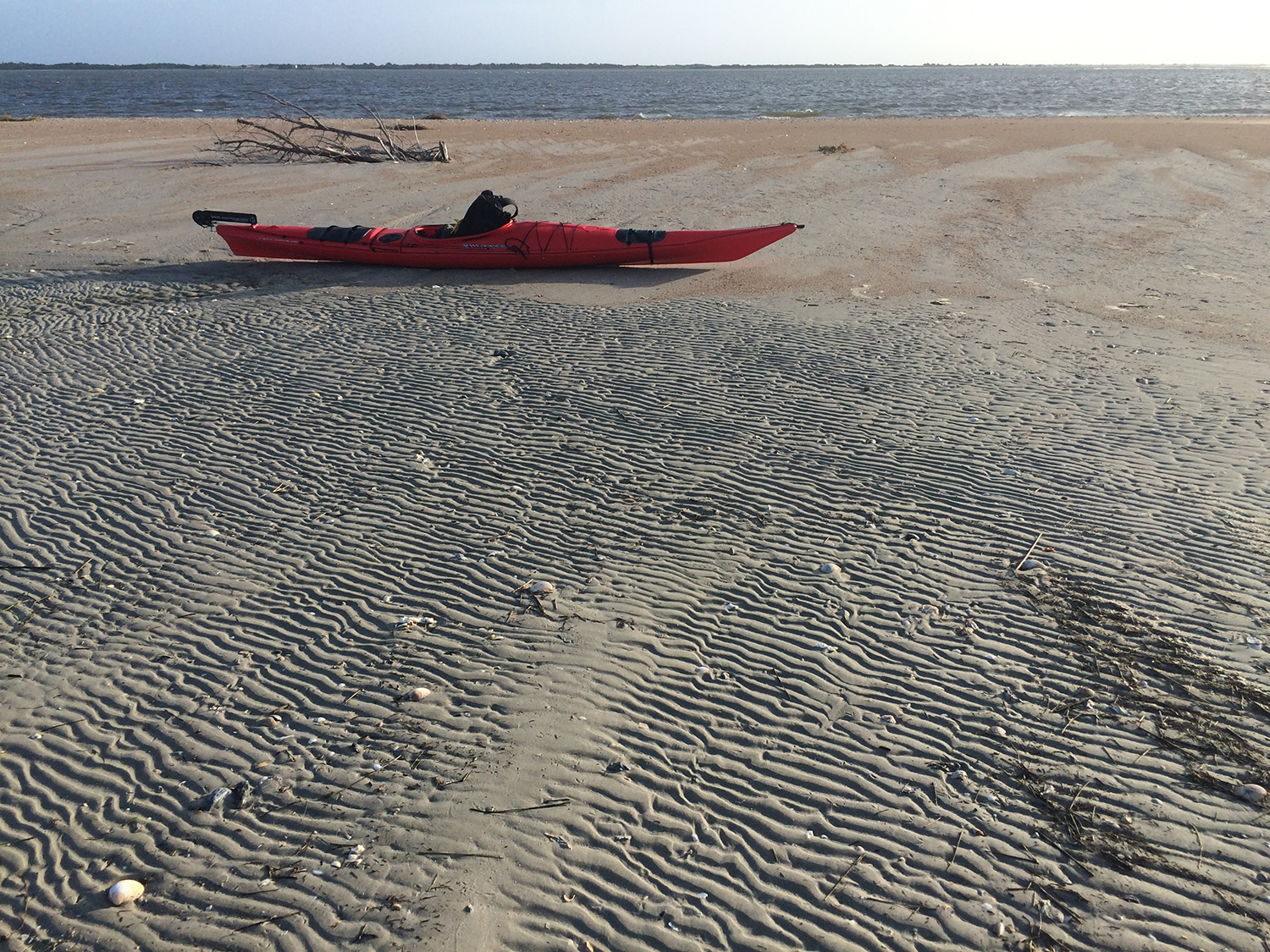 Shackleford Banks is visible from the eastern end of Bird Shoals on the Rachel Carson Reserve. Photo by Sarah Spiegler

• Respect the power of nature. Always check the wind, weather and tides before you leave. Postpone your trip until you have better conditions, if necessary. Stay updated when out on the water of changing conditions with numerous free apps on your smartphone.

• Know your limits — be aware of your abilities. Do not paddle in conditions that are beyond your skill level.

• Always wear your personal floatation device when you are paddling. Also, wear your leash, if you are on a stand-up paddleboard. Leave a float plan with a friend. Bring water, snacks, sunscreen, a rain jacket, shoes to protect your feet from oyster reefs, first-aid supplies, and a cell phone in a waterproof container.

• If you are a beginner, plan your trips paddling with the tide, and then have a friend pick you up at your destination. Or, plan to start your trip paddling against the tide and paddle as far as you can, and then change directions and “ride” the tide back home. Paddling against the tide at the end of a trip often can feel overwhelming for a beginner and results in fatigue. When on a stand-up paddleboard, paddle against the wind when starting your trip for similar reasons.

• If you are paddling in a new place, seek advice from local paddlers. They are usually happy to share tips and local knowledge about the area before you set out on your trip.

• Above all, don’t forget a sense of adventure. Without that, all is lost.

Sarah Spiegler is an avid outdoor enthusiast, American Canoe Association kayak and stand-up paddleboard instructor, a wilderness first responder, and has worked on sailboats in North Carolina and New Zealand. She holds a master’s degree in environmental management from Duke University and previously served as the outreach specialist for the NOAA North Carolina Sentinel Site Cooperative.

This story originally appeared in the Holiday 2017 issue of Coastwatch.