In Lumberton, city residents were without public drinking water for almost nine days when a river-water intake pump as well as a generator at the water treatment plant failed during the storm. The area around the plant remained too flooded to make needed repairs for days.

That reality offers great perspective as I am one of several researchers examining the link between flooding and public-health infrastructure in two coastal urban settings: Morehead City, North Carolina, and Charleston, South Carolina. We began our project in mid-2015, but Matthew and other large flooding events in 2016 have made our study particularly relevant.

We want to know how extreme storms might affect the availability of drinking water and water supply to hospitals and public-health facilities in these communities. And we want to help them figure out how to address these potential problems. We seek to improve these communities’ abilities to respond and adapt to a wide range of impacts. 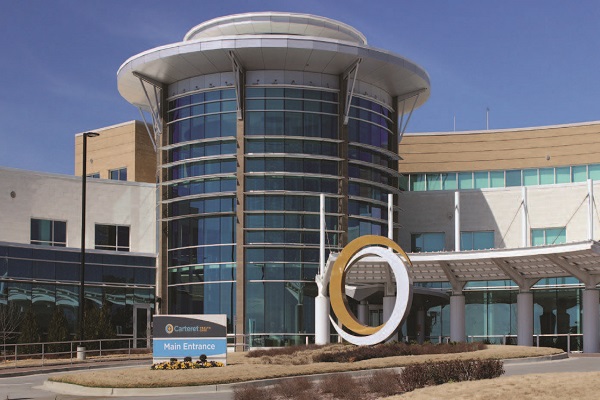 Jessica Whitehead is part of a team exploring how hospitals and public-health facilities can prepare for and adapt for flooding. Photo by Vanda Lewis.

Liz Fly, coastal climate extension specialist from the South Carolina Sea Grant Consortium, is leading the work. Our team also includes researchers from East Carolina University, Old Dominion University and Saint Louis University. Our goal is to create processes that help decision-makers determine the actions they should take, based on the severity of the flooding.

This project is supported by the Coastal and Ocean Climate Applications, or COCA, and offered through the National Oceanic and Atmospheric Administration’s Climate Program Office.

My colleagues and I are focusing specifically on water and wastewater infrastructure. We have mapped the communities’ exposure to extreme events and nuisance flooding, and identified the areas that may be most susceptible to public-health risks from failing or failed infrastructure.

For each community, we interviewed stakeholders from local health sectors, public works and planning. The GIS team from Old Dominion and Saint Louis universities mapped water, sewer and public-health infrastructure.

The partners estimated the population densities in these pilot communities based on data from the U.S. Census Bureau. This technique, called dasymetric mapping, enables us to fine-tune population distribution, using additional data such as aerial photographs, street-level maps and land use, to determine the specific needs that would arise in a flooding event.

In February and March, we worked with small groups of stakeholders in Charleston and Morehead City to test the concept of using these maps to identify the susceptibility of local infrastructure to flooding and measures they could take.

To do so, representatives from public works, emergency management, health and other relevant sectors worked in small groups. They examined storm and nuisance flooding scenarios, and judged how compromised a critical layer, like hospital locations, might be based on a specific level of flooding.

After completing several sets of these analyses for each layer, the group tested a larger matrix to assess how resilient the area is overall in terms of all sectors’ abilities to prepare for, absorb, recover from and adapt to flooding.

These scenarios enabled takeholders in the pilot communities to prioritize problems that might arise during flooding and decide how they might reduce their impacts.

Municipal officials were concerned about how surge, rainfall and storm duration might affect sewer treatment capacity and the ability of their staff to get to work.

The Morehead City participants requested a full exercise to help them focus on getting prepared for a bigger storm, such as Hurricane Hazel in 1954.

In the Charleston test scenario of a Category 1 storm surge, participants from local hospitals were concerned that patients would be cut off from accessing health services downtown due to flooding.

Hospitals needed water to run HVAC systems and to supply operating rooms, although both would function at a reduced capacity. Public works officials determined that newer water and sewer lines, and a plan to keep replacement parts on hand would minimize disruptions during a storm of that magnitude.

After working through these test scenarios, the research team will expand the concept into a larger planning exercise in each community. We will bring together planners, public-works and public-health decision-makers to improve their communities’ resilience to disruptions in wastewater and drinking water due to flooding and storms.

At the end of this project, we will document the process and exercises so that more communities can replicate our work for successful resilience planning.