HEEDING THE CALLS: Reflections on a Sea Grant Career 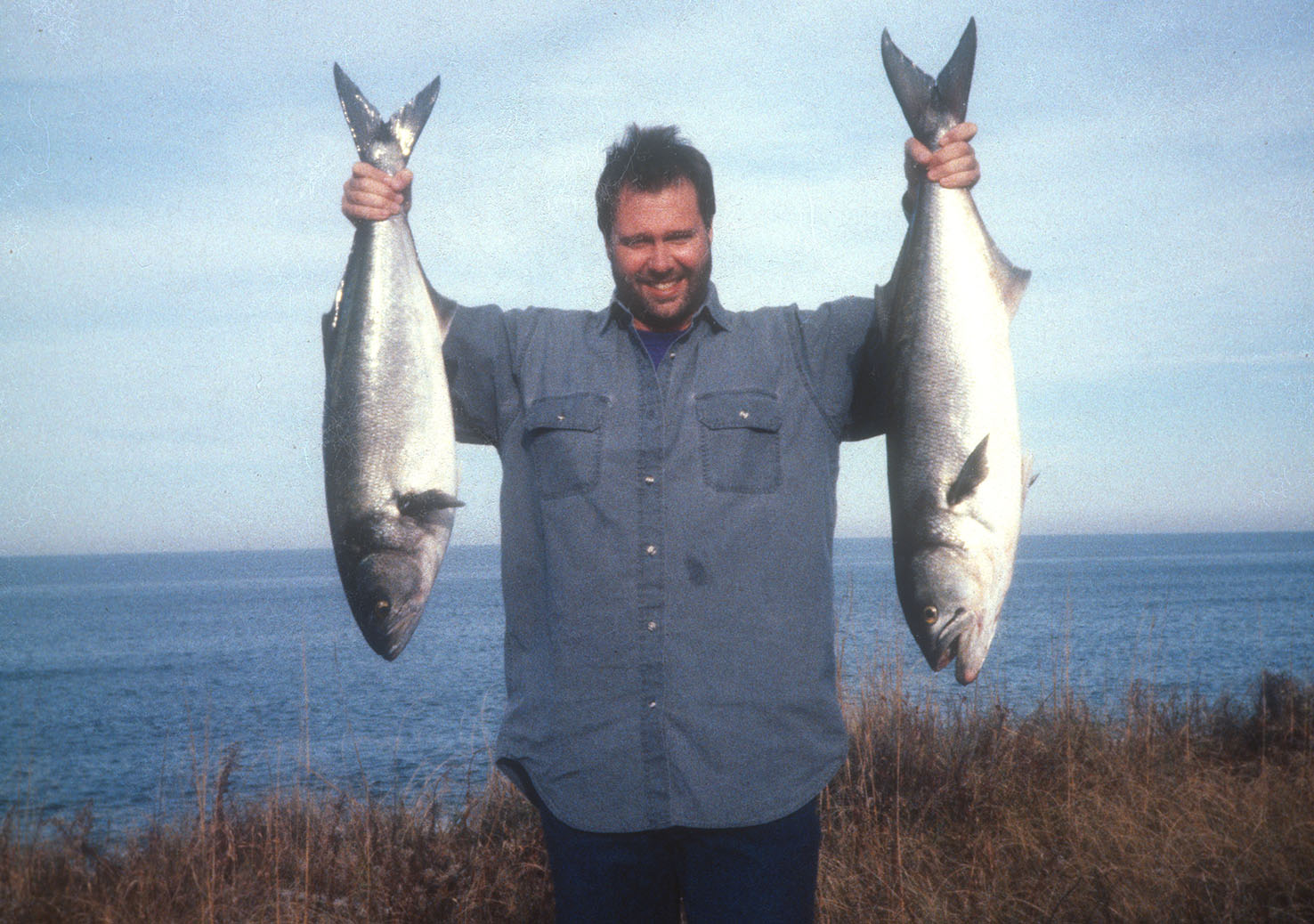 It’s been nearly two decades since Jack Thigpen lived on the Outer Banks, but he still remembers its familiar sounds — especially the harsh whistles of brown thrashers, along with the flute-like notes of wood thrushes.

“Our property was next to Kitty Hawk Woods, a 400- acre reserve with lots of thick underbrush. We could hear them in there, singing and calling as they searched for bugs,” he reflects.

Thigpen takes equal delight in listening to people — a skill that served him well in his 20 years with North Carolina Sea Grant, most spent as the program’s extension director.

“Jack always took time to listen to our concerns and to brainstorm about ways to move forward,” says Scott Baker, a Sea Grant fisheries specialist.

Thigpen’s thoughtful, collaborative approaches, and leadership by example, were highlighted as colleagues celebrated his retirement in late March.

“Partners across the state and beyond simply would say, ‘Call Jack.’ They knew his North Carolina team has been successful.”

Thigpen joined North Carolina Sea Grant in 1998 as an extension specialist with a focus on coastal recreation and tourism. He moved from Texas, where he had been a rural sociologist on the extension faculty at Texas A&M.

While Thigpen enjoyed Texas, he yearned to be closer to family in North Carolina and Virginia. “I was ready to go home,” he recalls. So, he checked in with Bob Ditton, his mentor at Texas A&M, who “gave me a Sea Grant extension manual and told me to call Jim Murray.”

At the time, Murray was North Carolina Sea Grant’s extension director. He recalls identifying Thigpen as a natural fit for the program.

“Jack was a North Carolina native and had an excellent ‘extension’ personality,” Murray says. “He was very good at interviewing me, to understand whether he wanted to work for North Carolina Sea Grant — and me.”

Thigpen, on the other hand, stayed in North Carolina — but kept Murray as a mentor.

Even before joining Sea Grant, Thigpen was no stranger to the state’s coastal rhythms. His father’s family had strong connections in Williamston, in eastern North Carolina. Young Jack grew up in Virginia’s piedmont, near Scottsville and the James River. There, the entire family joined the steeplechase community with his father, John Fleming Thigpen Jr.

But fishing was an essential part of summer vacations and holidays spent at the N.C. coast. 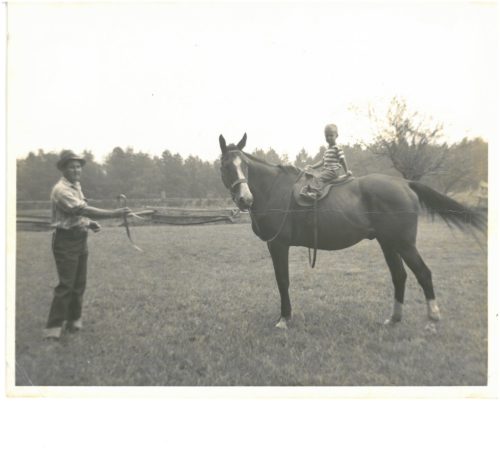 Steeplechase activities were important for Thigpen’s father — and thus for the family, too.

“When I was younger, my grandmother had a place at Pamlico Beach, on the river, south of Belhaven,” Thigpen says. “I remember waking up early and walking along the shore with nets, and finding soft-shell crabs to bring back for my grandmother to pan-fry for breakfast.”

Another vivid coastal memory is from a later trip to Hatteras Island. When Thigpen was about age 10, he learned lessons from Captain Ernal Foster of the famed Albatross Fleet.

“It was my first time going out of Hatteras Inlet, without sight of land. I felt like we were in this tiny boat in the huge ocean. It was like outer space,” he says. (His excursion did coincide with the early era of space exploration.)

But the reality of the day quickly took hold. He learned “the hard way” to obey the captain’s orders for handling a reel when fishing for blackfin tuna or mahi. He also had a personal lesson in the ocean’s food web. “I caught one that had been bitten in half by a shark,” he says with a laugh.

Once Thigpen arrived at Sea Grant, he reported for duty at its northern coastal location, just before that office moved from the N.C. Aquarium at Roanoke Island to an office on the causeway between Manteo and Nags Head — one sign of changes ahead for the program.

His early work focused on economic development. One project included extensive interviews that revealed overlaps between ecotourism and heritage tourism. “It was the best job I ever had,” Thigpen says, recalling his interactions with surfers and history buffs. Those interviews provided data to help small business owners better understand the emerging markets.

He also joined in planning for the Wings Over Water Wildlife Festival to celebrate the autumn bird migrations. Known as WOW, the program has since expanded to encompass a broader wildlife theme, and still draws tourists during the fall “shoulder season” for the Outer Banks.

Thigpen’s success as an extension specialist, and his professional background as a sociologist, were noted by Ron Hodson, then North Carolina Sea Grant’s director. Hodson asked Thigpen to serve a term as interim extension leader after Murray left, later making the duties and title permanent.

“Jack was a steady fellow, and we knew he would be a good leader,” Hodson recalls. “It was good timing for the staff to have a new approach.”

Thigpen was eager for his new duties, as he valued the extension specialists’ expertise and personalities. “I knew they were hardworking. I saw them cooperating with colleagues and with community partners,” he says.

His own office moved to the program’s headquarters in Raleigh. With time, Thigpen saw that he was fulfilling a key goal that Hodson had envisioned: bringing the natural and social sciences closer.

“During proposal reviews, extension specialists provide important comments on the need for a research topic, as well as on the methods and partners suggested. Then during funded projects, the team members are liaisons with the investigators, and also participate in the review of annual progress reports,” Fear explains. 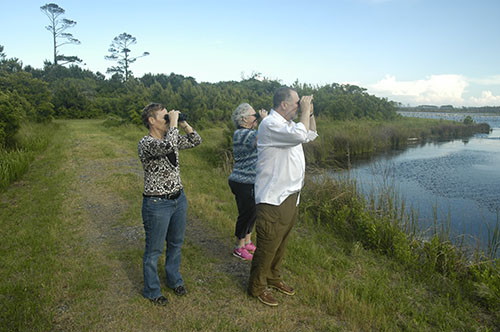 The success of those efforts may be attributed to the fact that Thigpen also followed another Sea Grant tradition: Hire great people. Then get out of their way as they do great work.

“He encouraged work plans with ambitious goals for everyone on his team, from administrative professionals to extension specialists. He helped them find funding, local partnerships, national mentors and other resources to ensure success,” White says.

“With four offices to keep track of — in Raleigh, Wanchese, Morehead City and Wilmington — attending to everyone’s needs may not have been easy. But Jack’s team knew that he was just a phone call away.”

In fact, more than a few of those phone calls revealed Jack’s sense of empathy and consideration.

For example, Sara Mirabilio had been on the job as a fisheries specialist for less than a month when Hurricane Isabel was targeting the Outer Banks in 2003. Like many others along the coast, she was facing mandatory evacuation from her home ahead of the storm. Without skipping a beat, Thigpen offered Mirabilio, as well as several other coastal residents, a place to stay with his family in Raleigh.

Thigpen also supported staff during their personal and family health challenges, always making sure his team knew that getting well was the priority.

Jessica Whitehead, now based in Raleigh, recalls when she was a Carolinas regional Sea Grant specialist, based in South Carolina — and was diagnosed with gestational diabetes. “The only carb I could eat that wouldn’t spike my blood sugar was sweet potatoes, so he brought me an entire box of them from North Carolina.”

In recent years, Thigpen’s skills were at the forefront of North Carolina Sea Grant’s intensive strategic planning process. That effort included multiple focus groups consisting of varied stakeholders, along with academic and agency partners. He also coordinated a wider survey of residents across the state to learn more about their interest in coastal topics.

“He put his heart and soul into this process to confirm the focus areas we have for 2018 to 2021. He also refined our goals so that they align with ongoing critical needs for coastal ecosystems, economies and emerging issues. The resulting plan is an excellent guide for our research and outreach in the coming years,” White explains.

Thigpen also has earned respect and praise on state and national levels.

“He became a super-effective leader on the national level by showing the value Sea Grant provides to communities,” Hodson says.

On the state level, Thigpen has been a valued advisor to a range of programs and initiatives. A graduate of NC State University’s Natural Resources Leadership Institute, he is a skilled facilitator who can lead meaningful discussions even among stakeholders with distinctly different views.

Bill Crowell, director of the Albemarle-Pamlico National Estuary Partnership, or APNEP, offers an example. “Jack was the chair of the APNEP Policy Board when we began our transition to a new Comprehensive Conservation and Management Plan. It was a four- year effort, and he was instrumental in the development of APNEP’s ecosystem-based approach.”

Thigpen also played an important but less formal role as a founding member of the steering committee for the N.C. Birding Trail, which grew from a coastal trail of prime birding locations to a statewide resource.

“His infectious smile belied a willingness to fearlessly jump into difficult conversations — and for that, his voice will be missed,” notes trail colleague Scott Anderson of the N.C. Wildlife Resources Commission. “Jack brought a light-hearted intensity to every meeting of the N.C. Birding Trail. We wish him the best.”

Just before his retirement Thigpen earned significant state and regional recognition. At a luncheon in his honor, he received the Old North State Award, signed by Gov. Roy Cooper, noting his outstanding state service.

His final week on the job was busy, as North Carolina hosted a Mid-Atlantic Sea Grant regional meeting in Corolla. There, colleagues also honored him with a career service award. Tom Murray, retired director of Virginia Sea Grant’s extension program, cited the importance of Thigpen’s collaboration and leadership not only to the region, but also to the national network.

“Jack has always been willing to help,” notes Murray, who also received a career award from the region. 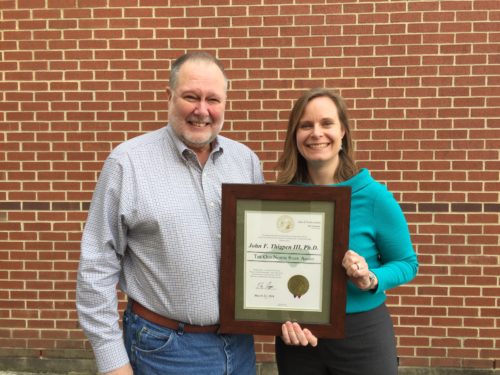 Thigpen officially turned over his office keys, but his tradition of service continues. He has assured the program’s new extension director, Frank Lopez, who recently arrived from Ohio, that he is still “only a phone call away.”

In the meantime, Thigpen is enjoying the perks of retirement.

He now has plenty of time to visit with friends and family, including his two daughters. Magan lives in Durham, where she is building a career in education policy and community service. Abigail is preparing to graduate later this year from the University of North Carolina at Asheville, with a degree in sociology.

Thigpen also is looking for a “best fit” for potential volunteer opportunities, perhaps related to birding or rural economic development, or both.

“I think it will focus on natural and cultural history,” he notes with a smile.