A River of Woes

In June 2017, news broke that a chemical called GenX had been identified in drinking water drawn from the Cape Fear River in the Wilmington area of North Carolina, with more than 200,000 public utility customers in three counties affected.

A company called Chemours, a spinoff of DuPont, manufactures GenX at a factory in Fayetteville, located on the river less than 100 miles upstream from Wilmington.

Also in June, North Carolina’s departments of Environmental Quality (DEQ) and Health and Human Services launched an investigation into the compound’s presence in the river. Over the past few months, state officials have found GenX in private wells near the plant, as well as at several other locations, at varying concentrations.

“DEQ will continue to investigate this situation and will ensure that public health is protected and the environment is restored,” says Sheila Holman, assistant secretary for the agency.

Citizens have expressed their concerns in public meetings. When an unfamiliar chemical like GenX ends up in drinking water, that’s when “the rubber meets the road,” said Mark Strynar, a chemist with the U.S. Environmental Protection Agency, in a recent seminar at NC State University. “People take notice.”

Indeed, the story of GenX isn’t unique. Scientists periodically identify contaminants in drinking water that have previously gone undetected — and that aren’t regulated by entities that set drinking-water standards.

In other words, the discovery of GenX in Wilmington drinking water represents a larger problem facing the public, says Detlef Knappe, a civil and environmental engineer on faculty at NC State. “The current regulatory framework is not sufficiently protective, because there are so many unregulated compounds that can be discharged into our drinking water sources,” he says.

So what exactly is GenX, how did it get in the water, and what effects does it have on health? 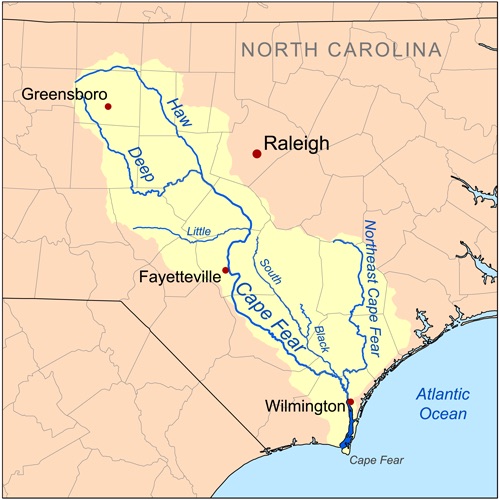 The Cape Fear watershed is from the piedmont to the coast. Kmusser © 2008/Wikimedia Commons/CC BY-SA 3.0

The chemical GenX is an industrial surfactant, used to bring molecules together to make polymers, such as those used in nonstick coatings.

GenX is part of a large class of synthetic compounds collectively called per- and polyfluorinated alkyl substances, or PFAS for short. Since manufacturers first started synthesizing them around 1950, PFAS (sometimes referred to as fluorochemicals) have been used in a range of industrial- and consumer-related applications, including water and stain repellents such as in carpets and furniture, firefighting foams, cosmetics, and some food-packaging coatings, to name a few.

There are least 3,000 PFAS currently available on the global market, according to a 2015 report by the Swedish Chemicals Agency. One hallmark is their persistence.

That is, they don’t easily break down in nature, if at all. They’re also indiscriminate travelers. They can hitch a ride in water, air, soil, dust, and more, which contributes to widespread dispersion around the globe.

Based on available evidence, the primary means of exposure to PFAS “is likely ingestion via drinking water and food,” says Jamie DeWitt, an environmental toxicologist in the Brody School of Medicine at East Carolina University. “There also may be skin exposure or inhalation exposure for items that contain PFAS, such as textiles.”

Often, companies that manufacture PFAS consider them trade secrets, according to the Swedish Chemicals Agency report. Lack of public information about the composition and use history of many of these substances hinders efforts to estimate their prevalence in the environment and set health standards based on that prevalence.

COMING TO THE SURFACE

Clues that GenX had made its way into drinking water date back at least several years.

In 2015, EPA’s Strynar published a study in Environmental Science & Technology that, by his account, received little attention at first. He and colleagues had collected water samples from various locations along the Cape Fear River — which serves several public water utilities — and its tributaries. 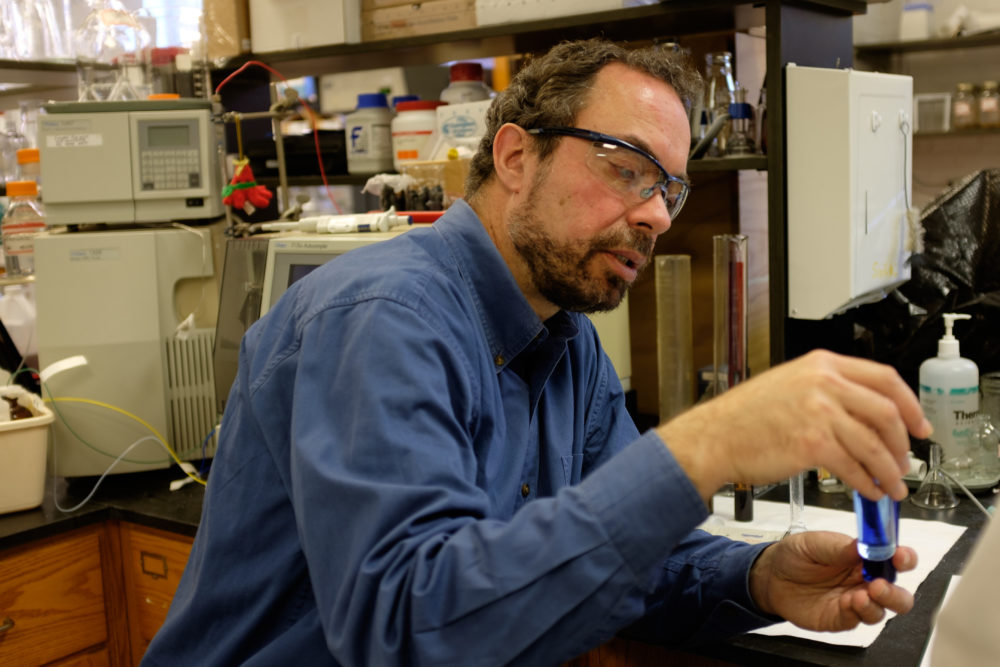 They uncovered what they described as a dozen “novel” PFAS — compounds found in water that, until that point, had gone unreported in the scientific literature. One of those compounds was GenX.

A year after Strynar’s paper came out, a research team led by Knappe published a related study in Environmental Science & Technology Letters. In collaboration with EPA researchers, the team collected samples of source water used by three drinking-water treatment plants along the Cape Fear River watershed and analyzed them for PFAS. They found GenX only in samples gathered at a plant located downstream of the Chemours facility, suggesting that the chemical was coming from the factory’s wastewater effluent.

The team also analyzed samples of water as it moved through that plant’s drinking water treatment process. They found that the plant couldn’t remove GenX, and that the chemical “made its way into the finished drinking water,” Knappe says.

Initially, Knappe recalls, he thought discharges of GenX into the river began when Chemours’ parent company, DuPont, started making the product commercially around 2010. But he eventually learned that he was mistaken.

In fact, GenX is much older than its trademarked name. Chemours has been generating the chemical as a byproduct since 1980, in a separate manufacturing  area, Knappe says. “The wastewater from that area got routed to a wastewater treatment plant on site, and then into the Cape Fear River,” he explains.

The revelation “is something we only learned this [past] summer, through disclosure from Chemours,” Knappe adds.

Meanwhile, in July the DEQ reported that the company had stopped discharging the treated wastewater from commercial production of GenX, and would instead collect it for incineration offsite.

Various studies on humans and animals indicate that exposure to some PFAS can damage the liver, interfere with the immune and endocrine systems, affect fetal development, and cause tumors in the kidneys and testes, among other problems.

These adverse health effects have led to the retirement of certain PFAS. For instance, in 2006, eight major companies voluntarily agreed to phase out production of a type of PFAS called PFOA, as well as PFOA-related chemicals by 2015. The EPA states that there are a limited number of ongoing uses, however.

But, as Knappe notes, phasing out one PFAS doesn’t mean that nothing takes its place. “Something else gets made,” he says. GenX is what he calls a “fluorinated replacement for PFOA.” 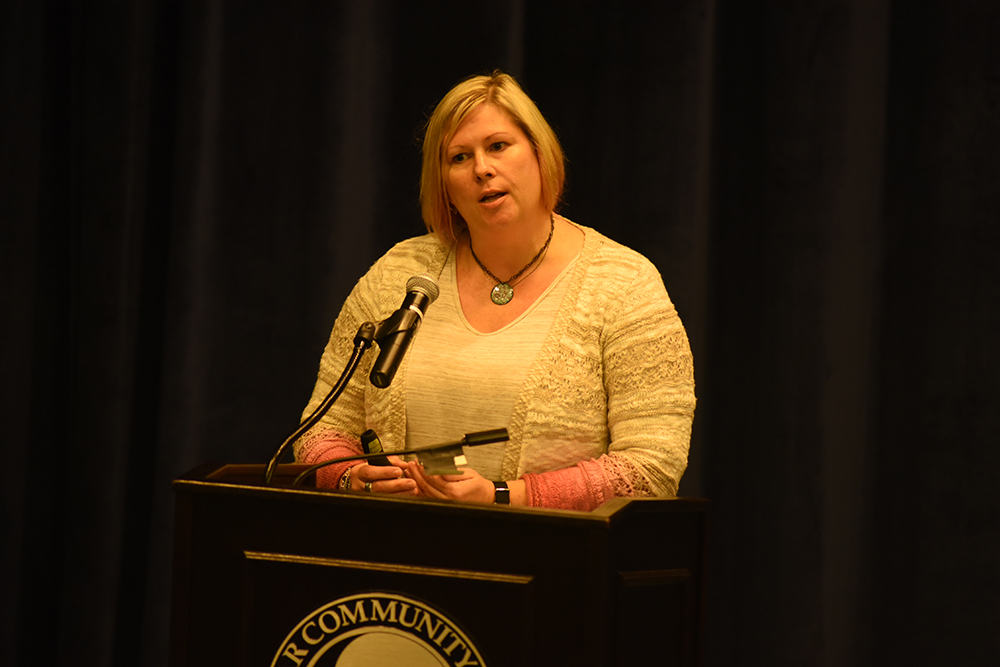 Environmental toxicologist Jamie DeWitt participated in a forum in Wilmington in July. Photo by Mary Goughnour/StarNews

While the federal government has not issued health guidelines for GenX exposure, the N.C. Department of Health and Human Services has set 140 parts per trillion as the level at which no adverse health effects would be expected over a lifetime of exposure for the most sensitive of consumers — namely, bottle-fed infants. But how GenX behaves in people is yet to be determined.

“To the best of my knowledge, there have been no studies on GenX elimination in humans,” DeWitt says. “There is one published study on GenX elimination in rats, mice, and monkeys, and it is eliminated more rapidly in these species than is C8 [another name for PFOA], but we have no basis to say that the same will be true of GenX” without hard data, she adds.

Soon, researchers and water customers might know a little more. A team led by Jane Hoppin, deputy director of the Center for Human Health and the Environment at NC State, is running a study of about 300 people who live in the Wilmington area, and who were served by the Cape Fear Public Utility Authority, which draws much of its water from the Cape Fear River.

“We collected blood and urine from individuals age six and over, and we also collected a water sample from people’s homes, and then we collected questionnaire information,” explains Hoppin, whose team includes DeWitt and Knappe. The samples will be tested in a laboratory at the EPA for GenX and several other PFAS.

Hoppin says that as the study pertains to GenX, the goal is three-fold: to determine if that compound is detectable in people; to see if certain members of the demographic are more inclined to accumulate it in their body; and to see if there might be any health effects associated with the presence of GenX in the body.

The study has limitations, Hoppin notes. For instance, the results will not help scientists draw a cause-and-effect relationship between GenX exposure and health problems. But the work is an important first step toward better understanding how GenX behaves in the body.

“This is really research,” Hoppin says. “We don’t know what we’re going to find, but we’re trying to be public about it and trying to keep information moving.”

Keeping drinking water clear of emerging contaminants is a constant challenge. Most wastewater treatment plants, in essence, rely on microbiology to remove organics from the water, according to Knappe. But GenX, like many of its fluorinated cousins, doesn’t biodegrade easily.

Plus, GenX “basically loves to be in the water,” says Knappe. “It’s a compound that is quite soluble in water and interacts strongly with water, so it’s difficult to pull it out by processes like activated carbon adsorption.” Simply put, standard water treatment technologies won’t remove GenX.

Knappe says that methods that involve membrane filtration — such as reverse osmosis — show potential, based on lab experiments he’s done. “These processes work to remove fluorochemicals,” he says, but he cautions that they’re energy intensive, and generate a waste stream containing a high concentration of the compounds.

In August 2017, EPA scientists informed the state that they had identified in Chemours’ waste stream two other fluorinated chemicals, known as Na on byproducts 1 and 2. A few months later, the DEQ partially suspended Chemours’ wastewater discharge permit — an effort to prevent any industrial process wastewater from being discharged into the Cape Fear River, says Sheila Holman of the DEQ.

According to Holman, “the public drinking water supply in the lower Cape Fear River has generally been below DHHS’s provisional health goal for drinking water since early July, with a couple of exceptions.”

For instance, GenX has been found in private wells located near the Chemours facility at levels above the health goal set by the state. “All the affected well owners have been provided with bottled water,” Holman says, “and DEQ is working with the company and municipalities to determine permanent solutions to the contaminated wells.”

“One of DEQ’s top priorities is addressing emerging compounds in our environment, including those compounds in the PFAS family,” Holman adds. “DEQ has initiated an expanded ambient water quality monitoring program to assess which emerging compounds may be present in the rivers across the state. DEQ will work with the Secretaries’ Science Advisory Board to prioritize those compounds deemed to have possible human health effects.”

The state is also “taking an active role to determine if there are areas where the development of federal regulations is not keeping pace with the scientific occurrence and health impacts data for trace organic constituents [which include PFAS] that may be detectable in the water supply,” says Jessica Godreau, the chief of the Division of Water Resources’ Public Water Supply Program.

As regulatory entities grapple with keeping tabs on emerging contaminants such as GenX, the public can also play a role in improving water quality, Knappe says. “People need to push for disclosure of what is in consumer products,” he says. “It is very difficult for people to educate themselves when there is so little disclosure.”

“In many ways, we end up being complicit in all of this,” he adds. “In the end, we also have to ask ourselves, do we want the convenience of non-stick pans, stain-resistant carpets, and popcorn in microwavable bags or not? I think if the market for this stuff wouldn’t exist, then the stuff also wouldn’t get made.”

This article originally appeared in the Winter 2018 issue of Coastwatch.