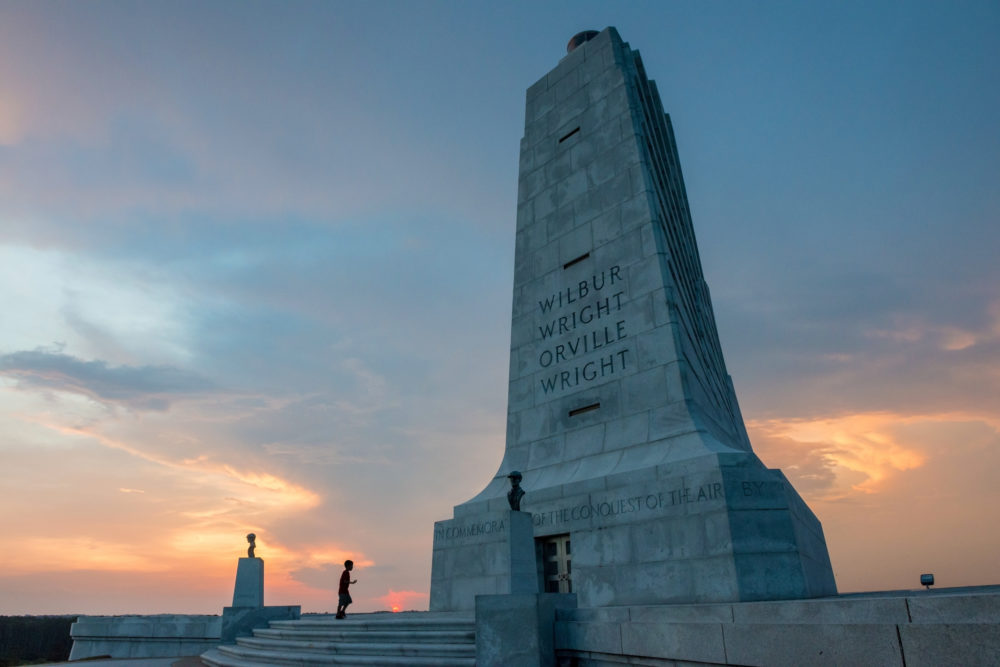 When trees are bare and wind is brisk, do you wonder how to spend your spare time? Coastal North Carolina offers plenty of opportunities for exploring, learning and having fun, beyond summer.

November through March is the off-season in North Carolina, bookended by shoulder seasons before Memorial Day and after Labor Day. Cooler weather during these months typically means smaller crowds, which will please peace and quiet seekers.

But a coastal vacation at this time of year also supports a variety of local businesses.

“Fall, winter and spring are great times to visit the coast,” says Jane Harrison, Sea Grant’s coastal economics specialist. “Not only are you getting to enjoy the fresh air, but you also are helping coastal communities lengthen their season by supporting them outside of peak summer times.”

As you plan your winter excursion, consider the following attractions, recommended by members of the Sea Grant team.

The Outer Banks, along the northern coast, boasts excellent beachcombing year-round, but the off-season can be particularly productive.

If you travel to Hatteras Island, stop at the Graveyard of the Atlantic Museum. There, you can learn about the 3,000 ships that have sunken off the coast, as well as the geological features that make the region treacherous. The museum is open every day except Sunday throughout the winter. 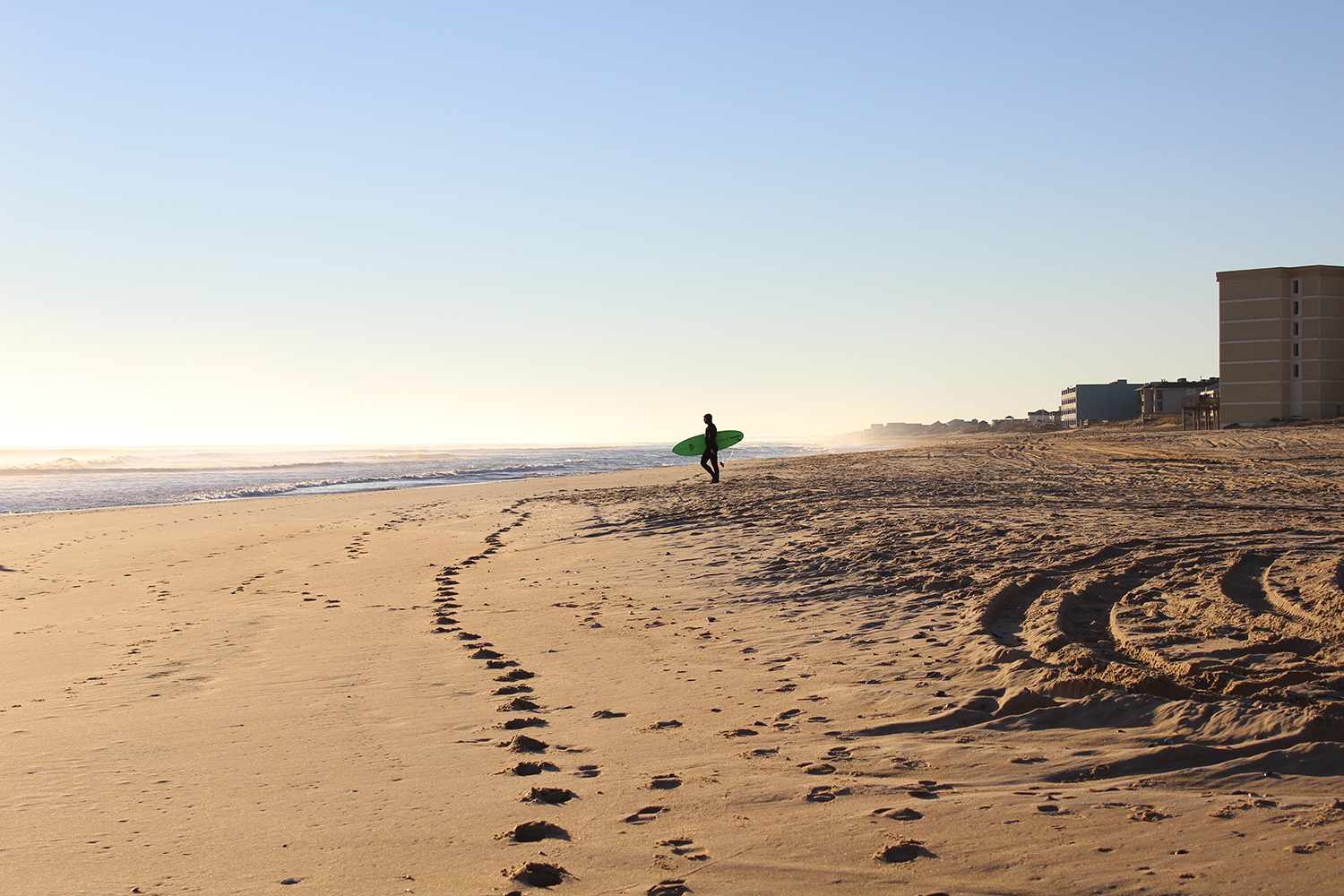 Nags Head is a popular tourist destination in the Outer Banks that boasts beachcombing and surfing all year. Photo by Vanda Lewis.

The Wright Brothers National Memorial is another piece of history to explore in the Outer Banks. The park marks the site where, in 1903, Orville and Wilbur Wright achieved the first successful airplane flight. “We have visitors year-round, although this time of year things are a little bit more quiet,” says Jin Prugsawan, a National Park Service representative who works at the memorial.

Visitors can tour the reconstructed camp and hangar, stand where the brothers first took to the air and climb to the top of Big Kill Devil Hill to get the best view of the park. The visitors center is undergoing renovations, so plan for a day outdoors.

As you make your way off the banks and toward the coastal plain, check out Goose Creek State Park. Nestled between Washington and Bath, the park showcases the natural beauty of the central coast. Amble along trails that wind through wetlands, or bring your own kayak or paddleboard to explore the cypress swamp where Spanish moss dangles from the trees.

As you meander into the central coastal communities, you’ll reach the Down East region, east of Beaufort in Carteret County.

Vanda Lewis, who recently retired from Sea Grant’s office in Morehead City, recommends chartering a boat and going fishing as a way to get out on the ocean. Embark from Atlantic Beach or Morehead City, and try your luck at catching seasonal fish like redfish, striped bass and black drum. 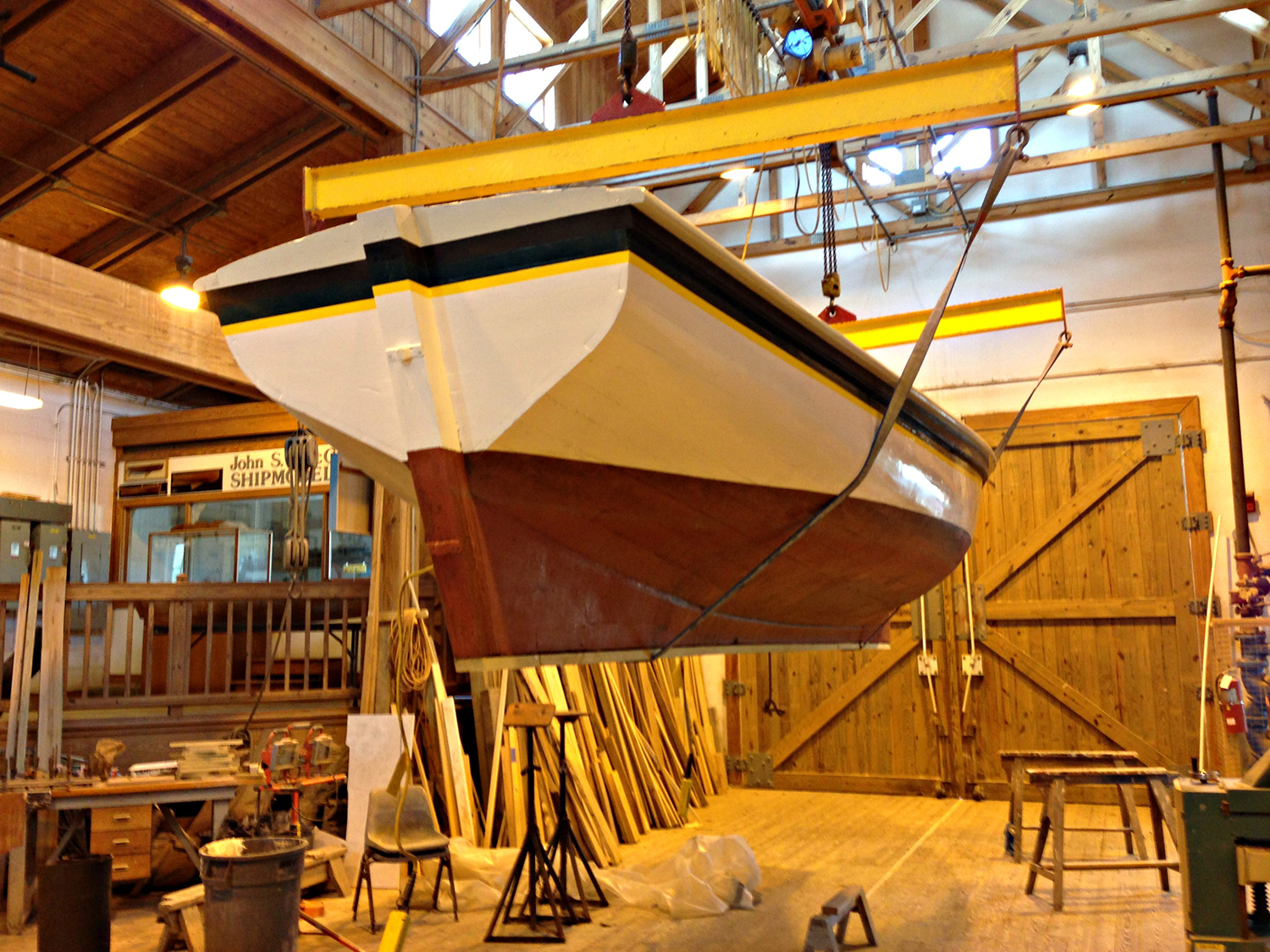 In Beaufort, the Maritime Museum aims to carry on the rich boat-building heritage of the N.C. coast. Photo courtesy David Cartier

If you don’t have sea legs, the Town of Beaufort will appeal to history and culture buffs alike. Join a walking or biking tour to learn about the town’s past, which dates back more than 300 years. Also visit popular downtown sites that include historical homes, restaurants and shopping.

Complete your tour of Beaufort at the North Carolina Maritime Museum, where you can learn about Blackbeard’s ship, the Queen Anne’s Revenge, which sunk off the coast in 1718. Also check out current exhibits like North Carolina’s Surfing Legacy, which provides a glimpse into how the sport has evolved over the years.

In Bogue Banks, stretch your legs at Fort Macon State Park, located four miles from the Atlantic Beach boardwalk. The park’s trails wind through the fort and down toward the shoreline, and include a new three-mile nature path that spans three ecosystems. The site was originally built as part of a national effort to defend coastal ports after the War of 1812, and was converted to a park in 1936. Catch a tour, or view exhibits on your own at the visitors center.

Randy Newman, the park’s superintendent, says the number of visitors is high in the winter months. “In November of 2016 we had over 68,000 visitors and in December over 45,000,” he says. “The park is a nice way to get the family out of the house and to get some fresh air without the bugs that come in the summer.”

Continue south, and you’ll reach the largest city in the coastal region. Wilmington offers a mix of history, culture and nature that beckons visitors at any time of year. The weather is generally mild even during the shoulder and off- seasons, but prepare to bundle up in case there’s a cold snap.

Scott Baker, a Sea Grant fisheries specialist, recommends hiking. “My family and I like to spend weekends on state park trails, especially in the fall and winter,” he says.

At Carolina Beach State Park, explore different coastal habitats, including coastal fringe sandhill forest, wetlands, savanna, pine forest and brackish marsh. Be sure to stop at the visitor center to learn more about the site’s ecology or to chat with a ranger.

Less than five miles south of Carolina Beach is Fort Fisher. As you drive alongside the beach on Forth Fisher Boulevard, you’ll first come across Fort Fisher Historic Site. Visit indoor and outdoor exhibits of the Civil War- era site to learn about battles fought there.

A mile down the road is the Fort Fisher Recreation Area. Situated between the Atlantic Ocean and Cape Fear River, the park brims with biodiversity. Lucky photographers and birders may see rare species, such as loggerhead sea turtles and piping plovers, known to nest along the beach’s sandy shores.

Baker also recommends visiting Masonboro Island, the largest undisturbed barrier island along the state’s southern coast. As part of the N.C. Coastal Reserve, it can only be reached by boat. Catch a water taxi or shuttle from Wrightsville Beach to carefully enjoy the island’s fragile habitats and lapping waves.

Don’t let the winter blues keeping you from exploring. Throw a coat in the car, and cut for the coast!

At any time of year, the North Carolina Aquariums lure visitors with interactive exhibits, touch tanks, shark feedings and more. With locations at Roanoke Island and Jennette’s Pier, Pine Knoll Shores, and Fort Fisher, you are never too far away for an easy day trip from coastal locations or even the Triangle region.

North Carolina Sea Grant and the aquariums have a long, collaborative history, and continue to partner on many projects. Some Sea Grant staff, including coastal construction and erosion specialist Spencer Rogers, originally had offices at three aquarium locations. 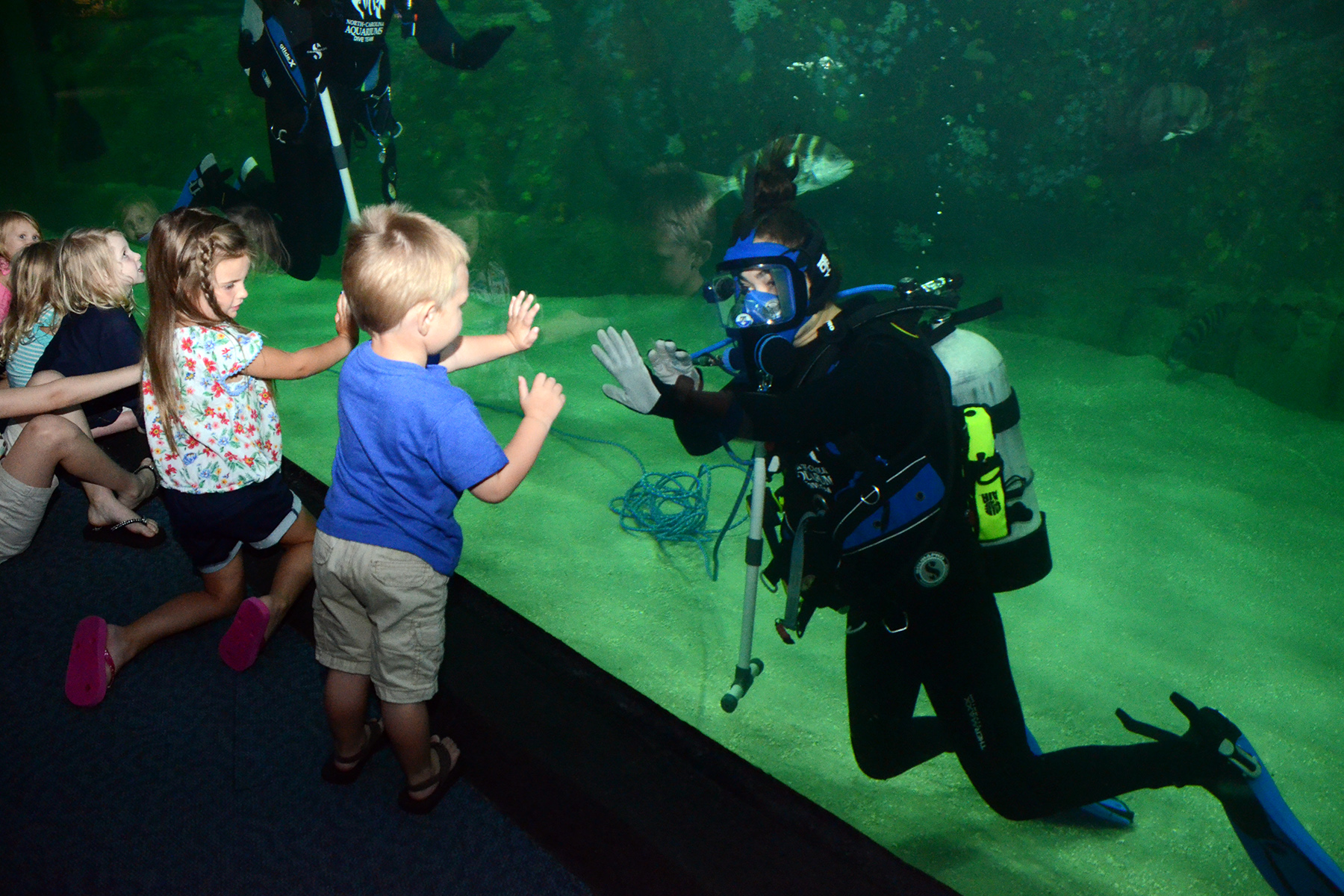 A dive technician throws out a high-five during a live-dive presentation at an N.C. Aquarium. Photo by Shannon Kemp

“For various reasons, as the aquariums evolved and expanded, the Sea Grant offices were moved elsewhere,” says Rogers, who is now based at the University of North Carolina at Wilmington’s Center for Marine Science.

“We left Fort Fisher in 1997, but I still work on projects with the aquariums,” he says. “Years ago, I had built a wave tank that is housed at Roanoke Island, and I am currently working on another one for Jennette’s Pier. Time does come around.”

Each aquarium offers slightly different attractions, but all focus on the diverse aquatic environments and species that are native to North Carolina.

At Roanoke Island, visitors can gawk at the largest group of sharks in the state and experience Sea the Change, an exhibit highlighting the newly remodeled aquarium. While in the area, stop by Jennette’s Pier, where you can hone your angling skills in the summer, or go birding or whale watching in the winter.

Follow water’s natural path from the mountains to the sea at Pine Knoll Shores. Begin your aquarium tour feeling the spray of a waterfall and finish by exploring a World War II shipwreck.

Free daily shows at the Fort Fisher aquarium delight visitors. Learn about food webs and watch staff members feed animals. Make time to chat with a diver who swims among sharks and schooling fish.You’re never too old to learn about the treasures hiding in North Carolina waters.

This article was published in the Winter 2018 issue of Coastwatch. Click here for reprint requests.