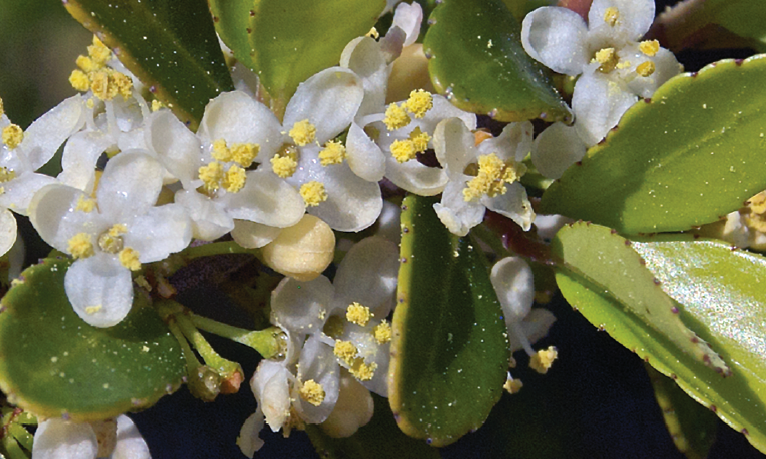 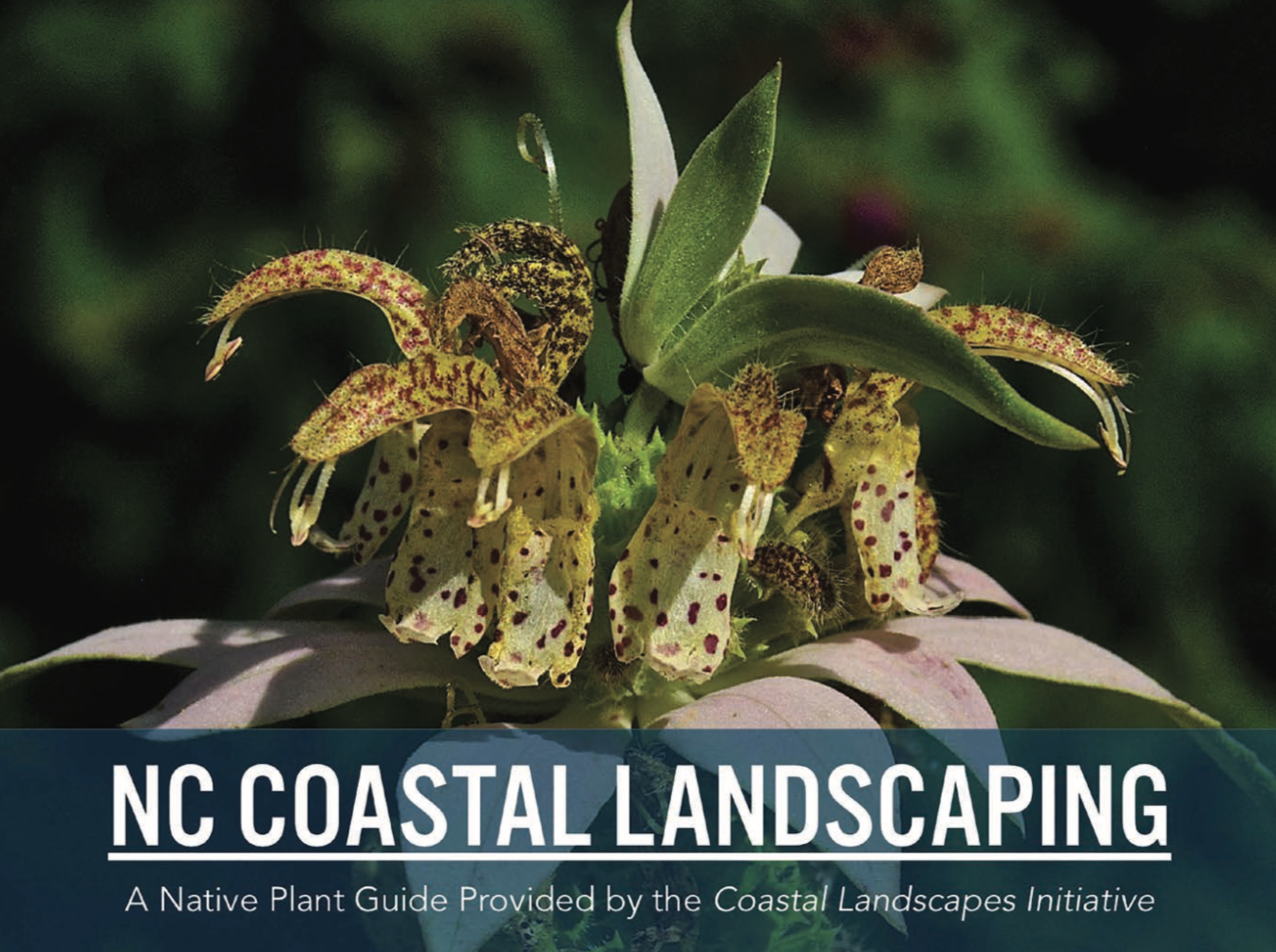 If you’ve ever mowed a lawn, weeded a garden or struggled with sprinklers, you know how much maintenance a yard requires. But there are approaches that not only simplify yard upkeep, they offer environmental benefits and storm protection too.

The Coastal Landscapes Initiative, or CLI, is a collaborative effort to address landscaping at every stage of the process, from planning and design to installation and management. Partners — including members of North Carolina Sea Grant — come from the public and private sectors and draw on a range of expertise. The ultimate goal is to foster coastal landscapes that are beautiful, functional, manageable and environmentally friendly.

“We’ve had requests for the native plant guides from coastal nursery managers and master gardeners, as well as novice garden enthusiasts,” says Sea Grant coastal economist Jane Harrison, who led the landscaping guide project. “A resident of Elizabeth City told me she simply likes red flowers. I suggested she plant coral honeysuckle to line her fence.”

“The guides offer something for everyone,” Harrison adds. “Whether you want to attract butterflies to your yard, plant storm-ready trees, or avoid excessive irrigation or fertilizer, these plant choices will help you get there.”

Just this summer, the guide earned an award for publication excellence from the annual Apex Awards, a national competition that recognizes achievements in print and digital media.

The following pages offer examples of what you’ll find in this resource.

For more information and to order copies of the guide or a companion brochure, visit go.ncsu.edu/CoastalLandscapes.

lead photo by Paul Hosier, Seacoast Plants of the Carolinas 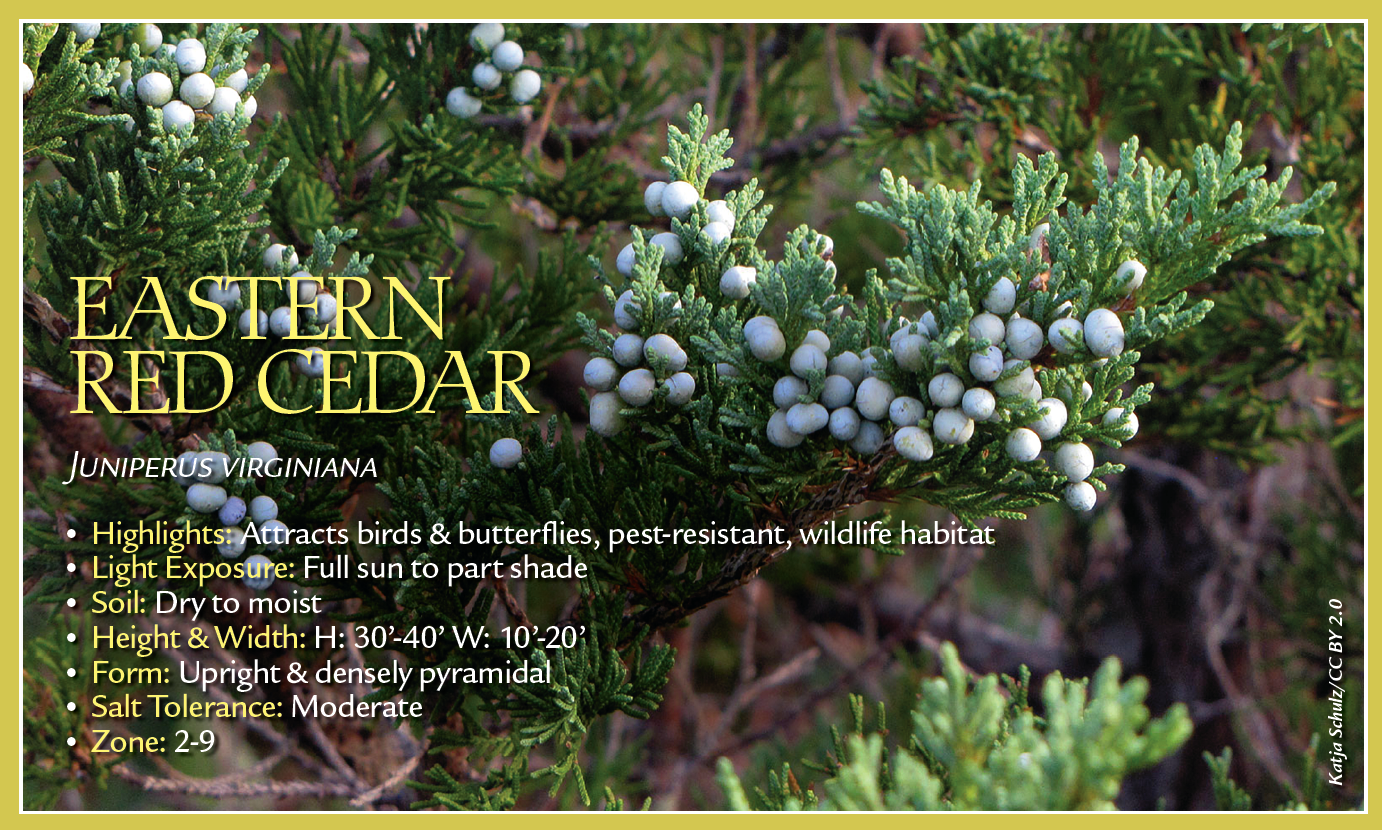 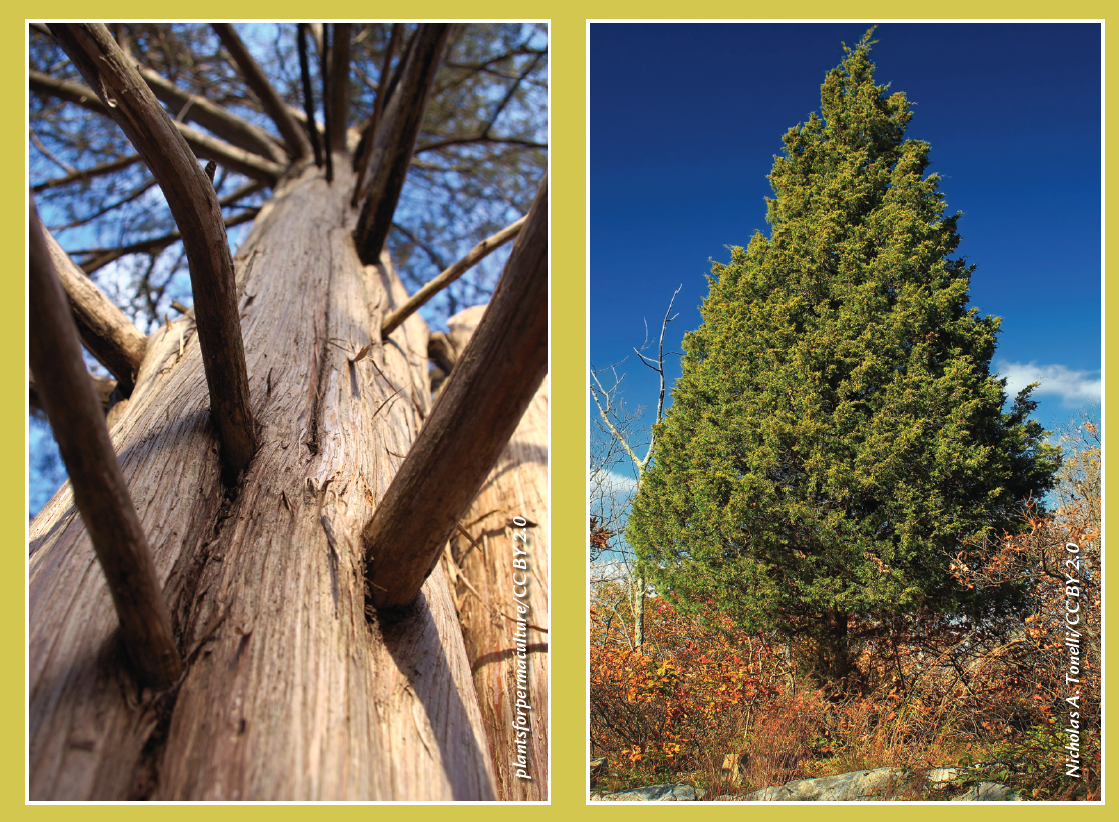 A dense, fast-growing, evergreen conifer with scale-like foliage found in forests or disturbed areas in fields and pastures and along fence rows. Its bark peels off in thin, shreddy strips that are collected by birds as nesting material. Female trees produce bluish, berry-like cones that ripen in autumn and provide nourishment for songbirds and small mammals. Eastern red cedar also provides winter cover to wildlife and is the larval host of the juniper hairstreak butterfly. Its aromatic heartwood is commonly used for cedar chests.

Suitable as a windscreen or buffer, this tough tree also boasts the best drought resistance of any conifer native to the eastern U.S. A smaller relative, the southern coastal red cedar (variety silicicola), found near ocean dunes, is significantly more tolerant of salt spray. Silicicola is harder to find in nurseries, however, apart from the “Brodie” cultivar. 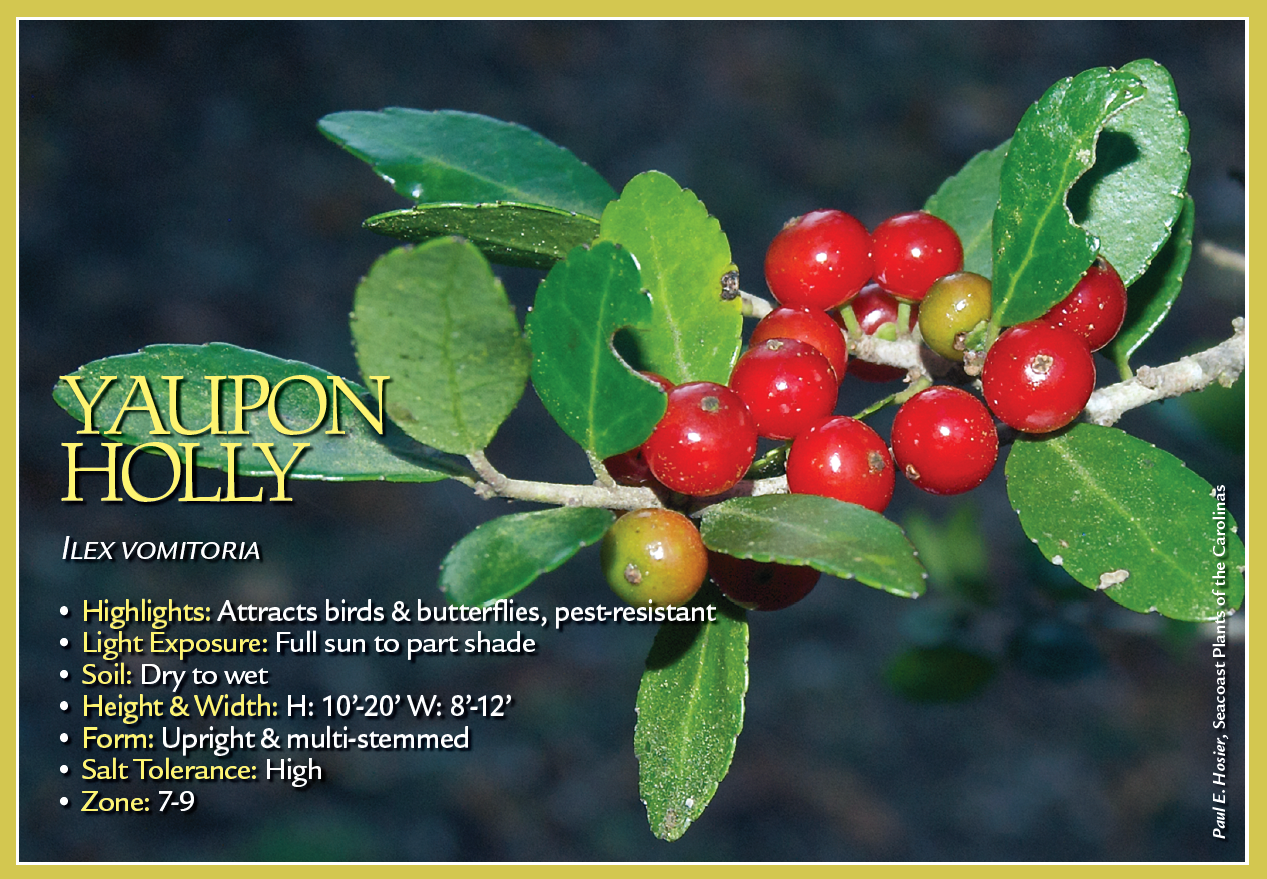 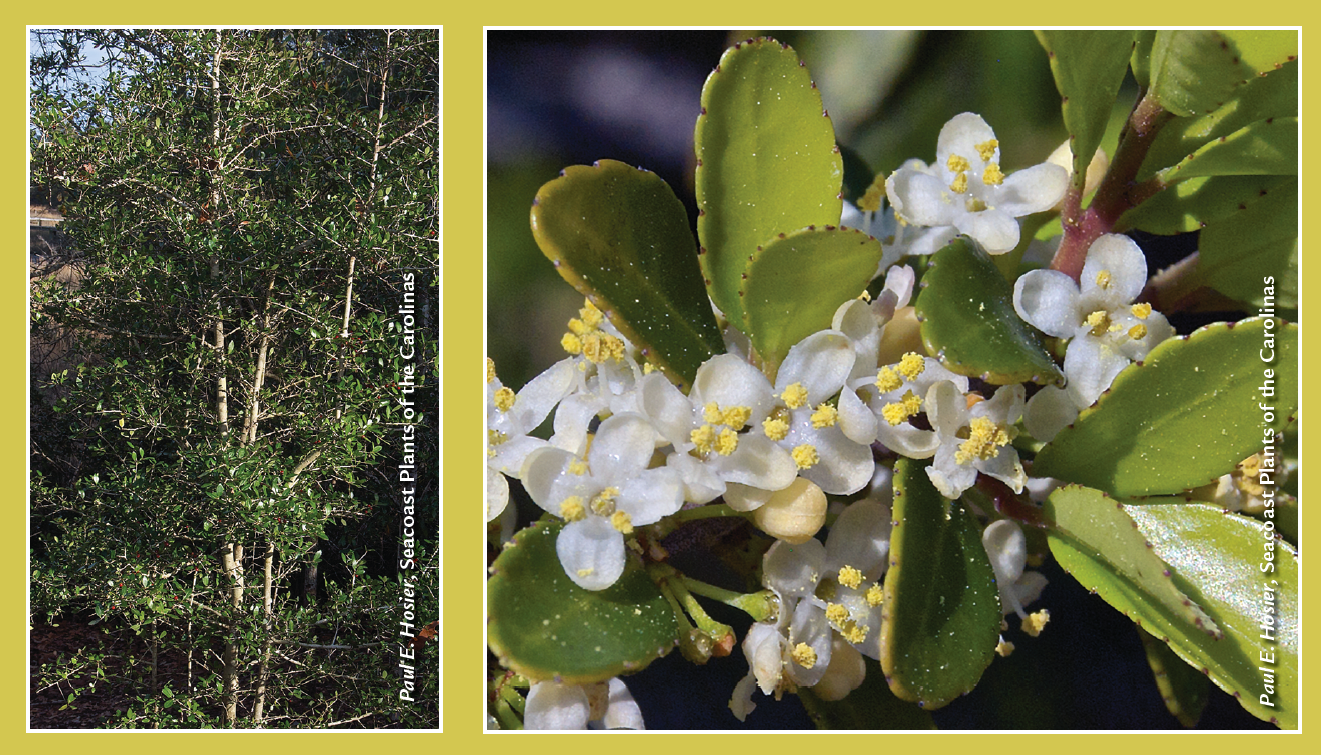 An evergreen shrub or small tree native to sandy woods, brackish and tidal marsh shorelines, dunes, maritime forests and shrub thickets. Plants are either male or female. On pollinated female plants, small, white, fragrant flowers give way to red berries that provide sustenance to songbirds and small mammals. Though toxic to humans, the bright fruit adds pizzazz to holiday decor. Yaupon holly is the source of a concentrated drink that Native Americans made to reportedly cleanse the body, hence its scientific name. Browned and dried leaves can also be steeped in hot water to brew a caffeinated tea. This species has been known to tolerate flooded conditions for extended periods of time. 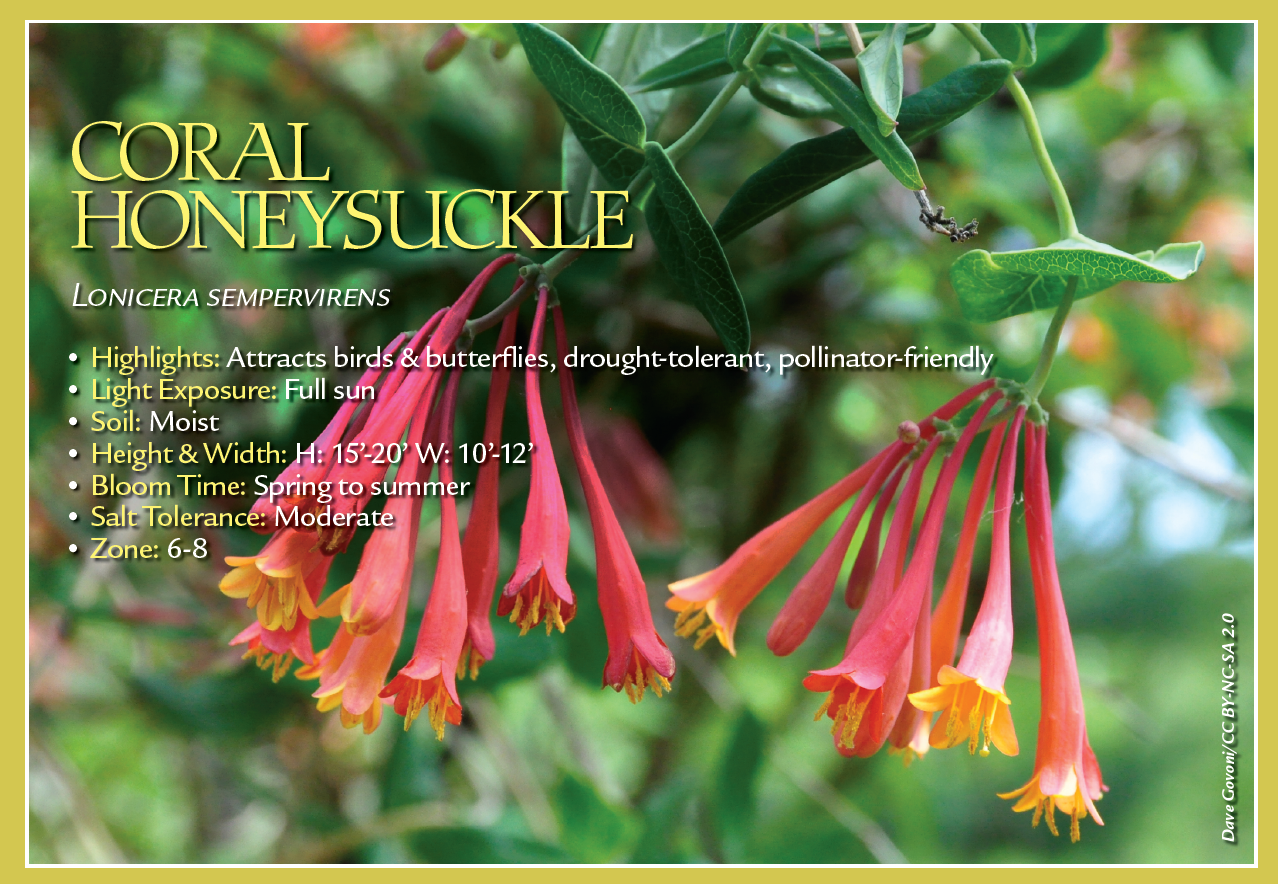 A fast-growing, woody, semi-evergreen vine that twines along the margins of maritime forests and maritime shrub thickets. One of the showiest of the vining honeysuckles, it dons long, tubular flowers that range from coral-red to orange-red and that may be lined with yellow. Coral honeysuckle is a larval host to the hummingbird clearwing moth. Various songbirds — including cedar waxwings, catbirds and cardinals — feed on its round, red berries, and hummingbirds seek its nectar. Unlike its invasive relative Japanese honeysuckle, coral honeysuckle is not aggressive. It blooms both in the spring and in autumn. 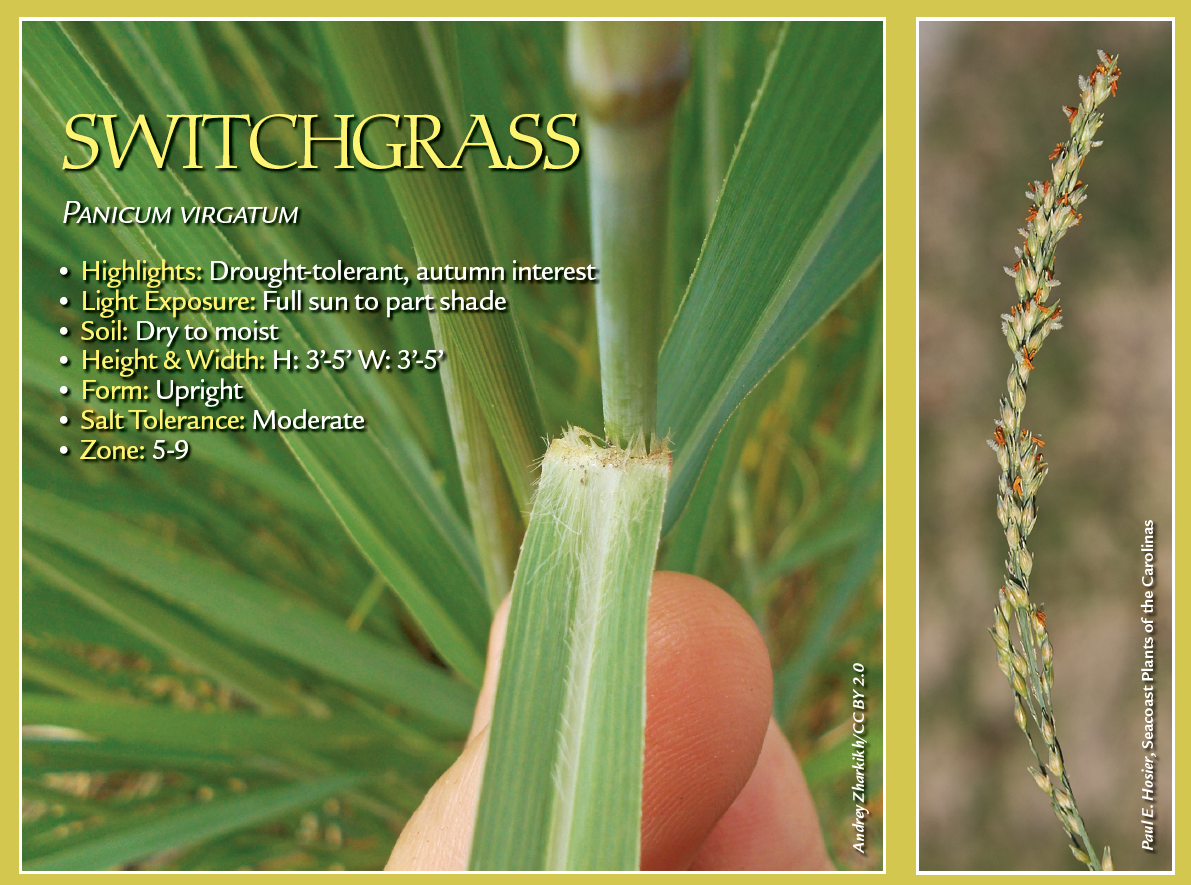 A fast-growing, perennial grass common in many coastal dune and marsh environments, as well as in tallgrass prairie. Its stems don pink-tinged flower clusters that are wind-pollinated. Autumn color often reveals reddish-purple streaks. Switchgrass is a boon to wildlife: A variety of wetland birds and songbirds eat its seeds; it offers nesting sites and cover for small mammals; and it is a larval host of various species of skipper butterfly. Switchgrass’ ornamental appeal and ability to thrive in poor soils makes it suitable for any coastal landscape. 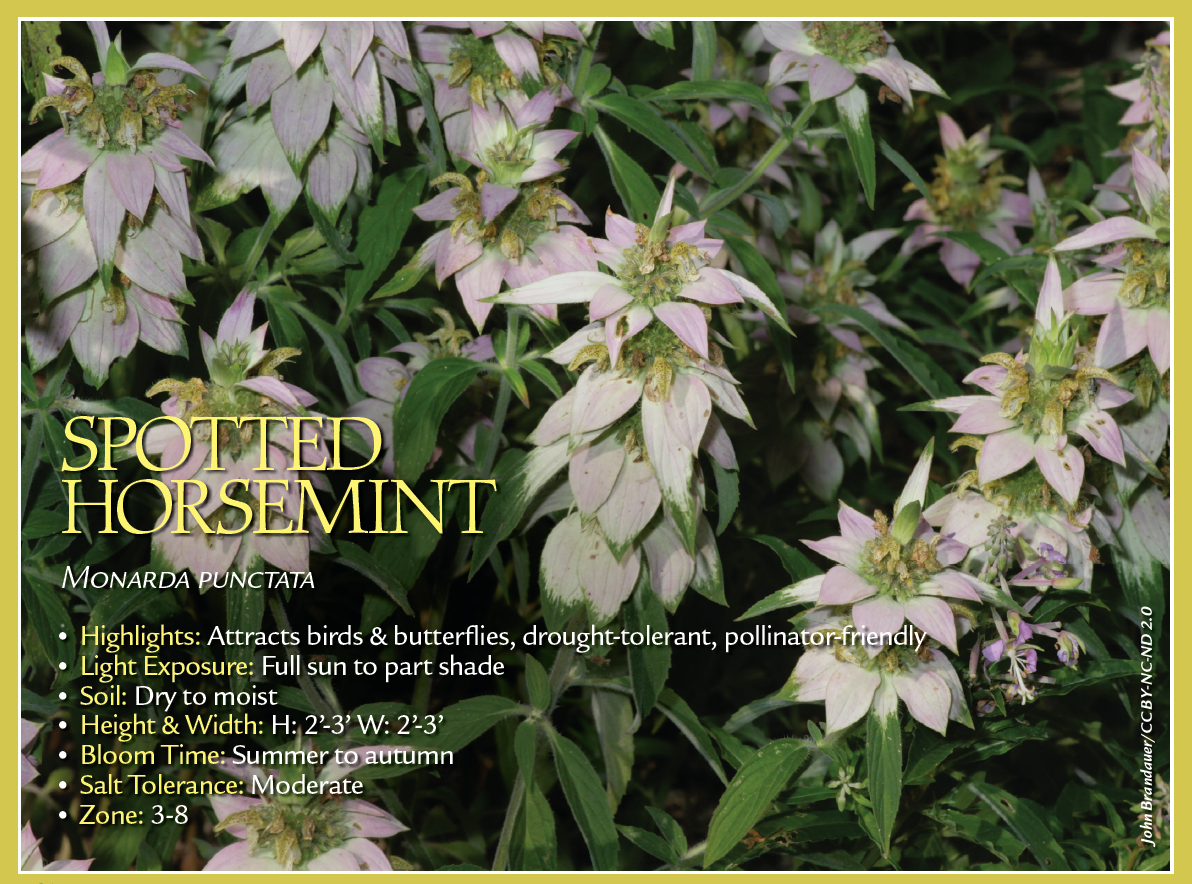 A short-lived perennial with aromatic leaves found in dunes and dry, sandy woods and fields. Purple dots speckle its pale yellow flowers, which emerge in mid-summer and grow in tight whorls at the top of the plant. Attractive lavender, pink or white leaf-like structures called bracts encircle the captivating blooms. The nectar and pollen attract hummingbirds, butterflies, honey bees, bumblebees, miner bees and plasterer bees. Spotted horsemint contains an essential oil called thymol, used as an antiseptic in some mouthwashes, and Native Americans drank tea made from its leaves to treat colds, fever and flu.

Also known as bee balm, this plant is well-suited to various types of gardens, including cottage, container, herb and butterfly gardens. It is unpalatable to deer, rabbits and other herbivores.