Is There a Future for Oyster Relaying in North Carolina?

For years, oyster farmers in our state have been telling researchers that they have seen greater numbers of healthy oysters in areas they harvest than in those they leave alone.

Nick Funnell is a graduate student in environment, ecology, and energy at the University of North Carolina at Chapel Hill. With Joel Fodrie, estuarine and fisheries ecologist at the UNC-CH Institute for Marine Sciences, Stevenson Weeks of Crab Point Seafood, and recent UNC-CH graduate student Zofia Anchondo, Funnell worked on a Community Collaborative Research Grant project to determine the ecological impacts of shellfish relays in North Carolina. 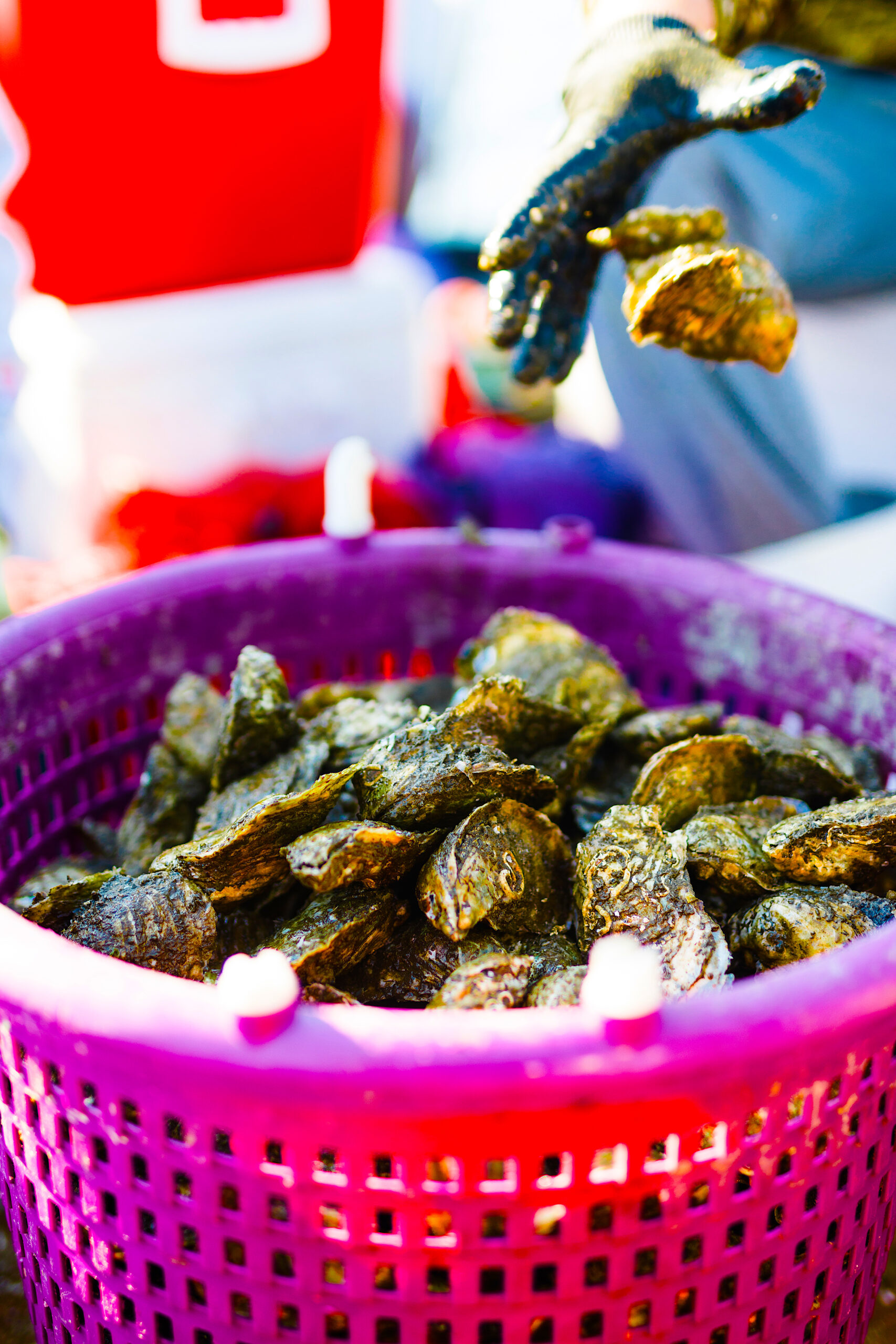 Farmed oysters (here) are available year-round. But from early April to mid-May in North Carolina, several areas that are usually closed to harvest are opened — under heavy restrictions — and farmers are allowed to transport oysters to active leases, a process known as “relaying.” Credit: Baxter Miller.

For North Carolina oyster farmers, periodic closures mean that the summer season can generate less revenue than that of their counterparts in northern states, who enjoy cooler water temperatures throughout the year. Warmer summer weather, combined with storm-induced freshwater pulses, provides a perfect environment for bacterial growth in N.C.’s many estuaries. Out of an abundance of caution for consumer health, the sale of local oysters is occasionally halted during periods of heat and rain to prevent the possibility of shellfish poisoning. Consumers can breathe easy, though, because oyster health is meticulously monitored.

Once the summer thunderstorms quiet and the temperatures drop, N.C. oyster farmers kick into high gear to make up for lost time and money. In addition to the normal activities of product distribution and lease upkeep, fall and winter are also the seasons for wild harvest. Permitted shellfishers of any experience level may remove oysters from open public waters between October and March (within the rules, of course). Some of these folks are doing so recreationally, removing a bushel or two here and there for a neighborhood oyster roast.

The entrepreneurial oyster farmer, however, sees this season as a prime opportunity to add future profits to a farm at no cost beyond labor. The more days spent harvesting wild oysters, the more oysters added to a farm. Wild harvest can be quite competitive for those involved, who often guard the locations of their favorite reefs with careful secrecy.

These farmers also know the value of local sustainability. They want to remove enough oysters to warrant the trip, while ensuring their secret spot remains a productive reef for years to come.

When the calendar flips to April, however, the rules change. Open access wild harvest ends. Spring rains begin. Leases are closed for business when freshwater pulses arrive. For some shellfishers, this period can finally be a time to relax after a hard winter of constant harvest and sales. For others, an opportunity to procure additional wild oysters arises.

From early April to mid-May, several previously closed areas throughout eastern North Carolina are opened for harvest — under heavy restrictions. The process of harvesting oysters from usually closed areas and transporting them to active leases is known as relaying. Because temporarily accessible areas are restricted due to consistently high pollution levels, relaying requires farmers to close their own leases for four to six weeks to allow ample time for the oysters to clean themselves before sale to the public.

In early March, the N.C. Department of Marine Fisheries announces the opening of the relaying permit application and determines which closed areas will be open for business. People who successfully apply may then harvest during set windows of time (typically one or two days a week for six weeks) under careful supervision from N.C. Marine Patrol. 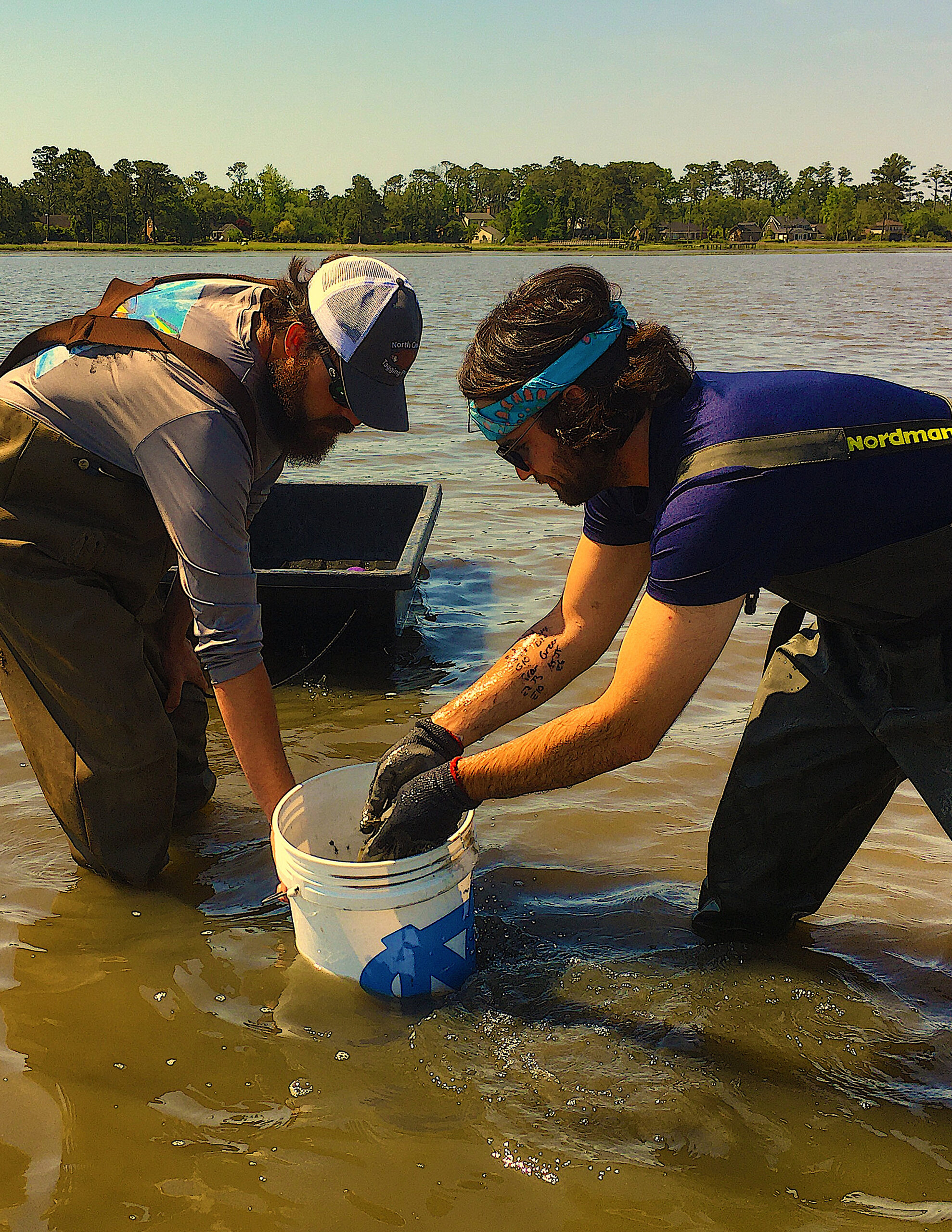 Within the shellfishing community, relaying is a highly controversial practice. The argument is fundamentally environmental. Critics say that the removal of oysters — which have prodigious filtering abilities — from polluted areas will further degrade areas with already poor water quality. Proponents argue that the removal of oysters actually promotes further reef growth and becomes a net environmental benefit.

One shellfisher told me a reef he and a few others had “completely flattened” just one year earlier yielded the largest legal-sized oyster haul they had ever experienced. The story grabbed my attention. The typical growth rate of oysters is generally considered to be about 1 inch per year. If the recovery of this reef was indeed what he claimed, these oysters would have roughly tripled the standard growth rate.

The central mechanism of this shellfisher’s account is well-established in ecology. He was describing disturbance theory — the idea that disruptions (either physical or biological) play a prominent role in ecosystem structure. This is closely tied to the theory of succession, which includes the classic example of the subsequent diversity bloom that can occur after periodic fires.

In disturbance theory, too many fires would lead to a non-diverse population of hearty grasses; too few fires would create an old growth forest with no understory. The happy medium is occasional fire activity, which would feature periods of high plant diversity as succession marches along before fire interrupts. This pattern of occasional interruption is known as intermediate disturbance.

If you are a farmer or gardener, you are an expert in disturbance theory. Your choice of when to prune, harvest, and mow all constitute carefully timed disturbances. Plow just before harvest: no bounty. Leave a species alone indefinitely: it grows wild. Well-disturbed is well-maintained.

For years, local oyster farmers in Carteret County have been telling researchers that they have seen greater numbers of healthy oysters in areas that they harvest than those that they leave alone.

We put these observations to the test. Using the expertise of these local oyster farmers, our resources at UNC-CH, and funding from North Carolina Sea Grant, we investigated several ecological factors associated with relaying. In neighboring areas where relaying occurred and did not occur, we measured oyster populations, their predators, health, and ability to remove nutrients to determine the impacts of relaying and non-relaying.

As of the one-year mark post-relay, oyster abundances in relayed areas have not yet recovered to pre-harvest levels. Despite the lack of recovery, the overall reduction in oysters from relaying appears to be relatively minor, as relayed areas still have very high numbers of oysters by ecological standards. Some experts consider the threshold of a healthy reef to be 10 oysters per square meter; our relayed reefs already exceed that — with an average of over 600 oysters per square meter.

We will be revisiting these sites once again in the fall and possibly beyond to track longterm recovery trajectory, as knowing the full recovery time of any given area is paramount for harvesters and regulators alike. 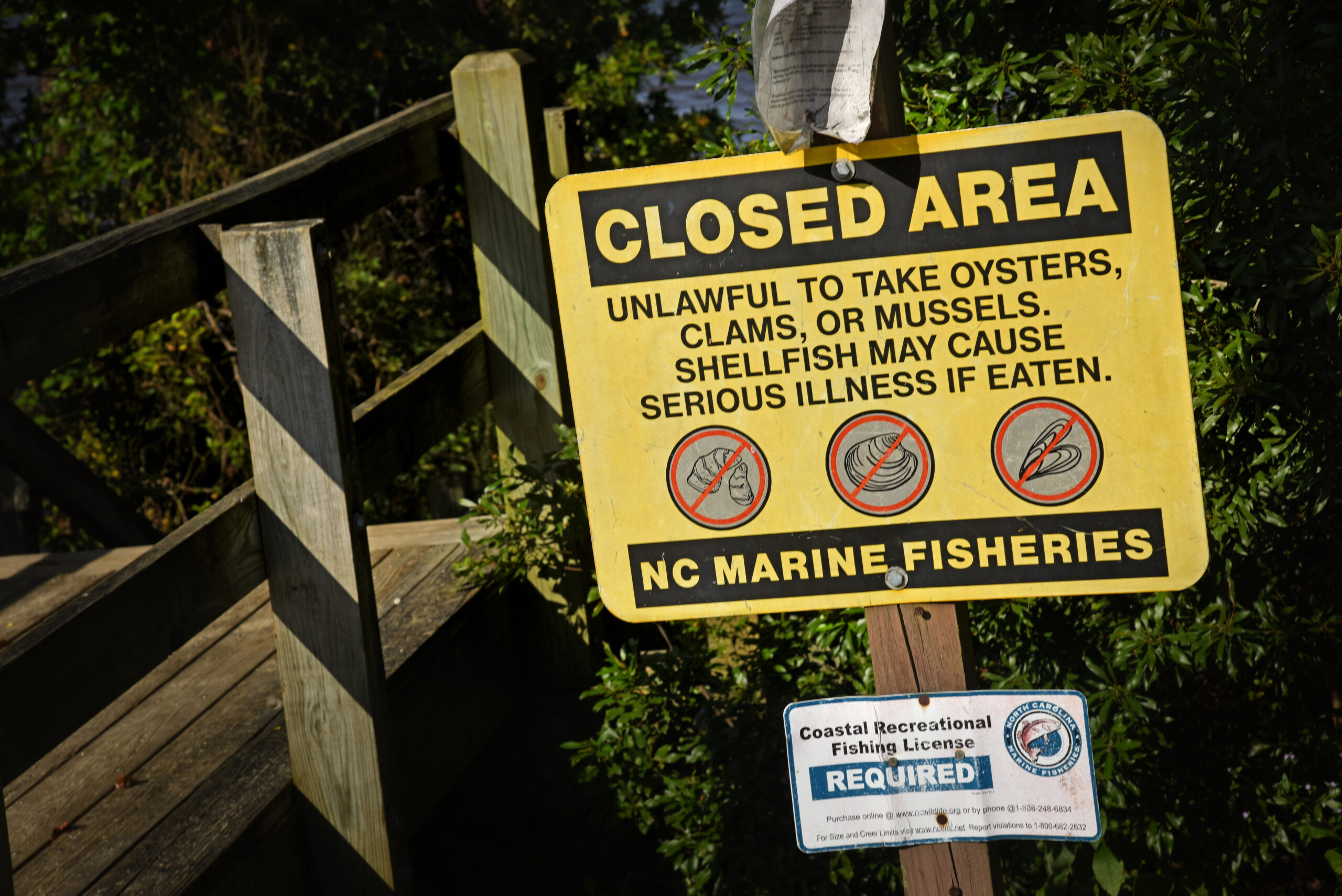 Officials meticulously monitor oyster health, and out of an abundance of caution for consumers, the sale of local oysters is occasionally halted during periods of heat and rain. Credit: NC State.

Is Relaying a Dying Practice?

Although shellfish relaying of some sort occurs in every state on the East Coast, oyster relaying in North Carolina might be a dying practice.

Wild harvest of oysters is hard work. I can personally attest to its challenges after asking some of the local farmers to teach me their techniques. Wild harvest is also old school. The classic oyster farm is essentially a natural reef, carefully managed by the lease holder. The farmer builds a bottom reef through wild harvest and relaying, letting it grow year after year.

The popularity of these bottom reef leases, however, is waning in favor of floating bags. Working a floating bag lease is still demanding, but it relies much less on adding wild oysters than it does on purchasing and developing spat (oyster larvae) in protective cages. It’s somewhat of a cleaner process — easier to observe, easier to manage (aside from storm vulnerability). While some oyster farmers do use relayed oysters to fill their water column bags, they are the exceptions.

From my conversations with various oyster farmers and my observations in the field, I speculate that diminished interest in relaying is correlated with state government regulations.

Each year, the North Carolina Division of Marine Fisheries (NCDMF) receives fewer and fewer relaying permit applications. Given the potential consumer health hazards associated with relaying — due to pollution related to land use, development, and agricultural runoff — the practice is heavily regulated. On any given relay day, Marine Patrol officers oversee the area and then escort each harvester back to his or her lease. At times, Marine Patrol boats have outnumbered harvesters.

Though there may be some occasional finger pointing and grumbling among shellfishers and coastal government organizations, the core causes of closures and the ever-shrinking areas suitable for healthy oysters come from upriver. Only comprehensive land management that incorporates both inland and coastal stakeholders throughout N.C.’s watersheds can address pollution that forces both periodic and consistent shellfishing closures. In the meantime, the exact impacts of relaying are important to study as we attempt to restore wild oyster populations all along the East Coast. If relaying does indeed promote wild oyster growth, the practice is not so antiquated that it is beyond saving. We ought to understand relaying before it disappears from our waters.