Back in July, just before SHARKFEST began, new regulations went into effect requiring use of a descending device in South Atlantic federal waters to help improve survival of released deepwater fish. But can shark appetites undermine this conservation strategy?

A research team led by one of the scientists who appeared on SHARKFEST, Marcus Drymon of Mississippi-Alabama Sea Grant, decided to find out.

Reducing mortality after catch-and-release in offshore recreational fisheries remains an important component of stock rebuilding for many reef fish. Mortality for these species can be high, due in part to injuries sustained during capture, coupled with high catch rates and various regulations.

Possible causes of mortality also include plundering sharks and other predators. Anglers and regulatory agencies alike want to know more about such opportunistic feeding, especially during the use of descending devices, which help released fish reacclimate to water pressure and return to deep waters.

To understand whether use of descending devices increases opportunities for predators to have a quick meal, researchers examined two GoPro camera data sets of red snapper from the Alabama Artificial Reef Zone in the northern Gulf of Mexico. This area is the largest artificial reef network in the United States, supporting avid catch-and-release fishing for red snapper. Anglers in this region say sharks often partially or completely chomp off hooked fish.

From 2016 to 2018, scientists collected a total of 1,483 videos from longline catches and 1,096 from descender releases. Sharks feasted on 54 longline catches but not on any fish released with a descending device. Videos also showed dolphins stealing from longlines 15 times, but, as with sharks, never from descender-released fish. Incidentally, 11 of those 15 instances of dolphins feeding off longlines occurred within a single two-day period.

Angler concerns about pillaging sharks have slowed the adoption of descending devices as a conservation strategy. However, results from this study show that descending devices aren’t actually baiting sharks or other predatory thieves, allowing released fish to live another day and help rebuild the population. 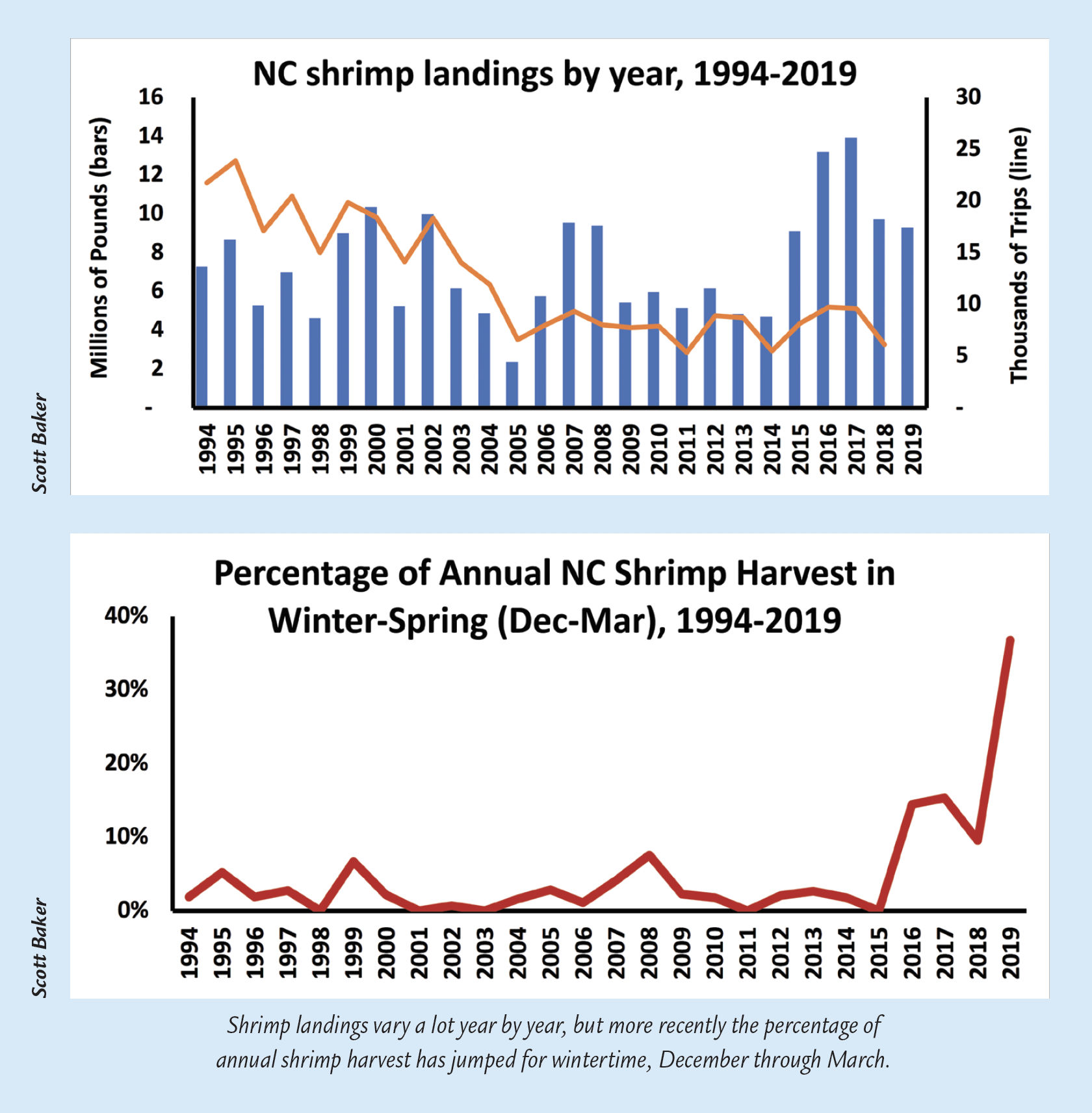 What’s Up with North Carolina Shrimp?

While it seems like a lifetime ago now, in early March I was invited to give a presentation at the annual North Carolina Catch Summit in Raleigh to discuss North Carolina marine fisheries and seafood trends. I had received several requests for topics to discuss beforehand, one being to provide more information about anecdotal reports of an increase in N.C. shrimp during the winter and spring months the past few years.

In North Carolina, wild-caught shrimp is one of the most important seafoods to the coastal economy, providing the livelihood for many commercial fishermen, a popular seafood for residents and tourists, and the bait-of-choice for many saltwater anglers.

Unlike most marine finfish, shrimp species are an annual crop, with fluctuations in their numbers closely linked to environmental drivers and biotic conditions. As a rule of thumb, historically 75% of N.C. shrimp are harvested in internal waters, with 25% coming from the Atlantic Ocean, predominantly off our southern coast. The last few years, however, fishermen have reported catching more shrimp in the ocean during the winter and spring. Are the numbers really up? And, if so, how would it compare to historic levels of shrimp harvest by waterbody and season?

N.C. Division of Marine Fisheries (NCDMF) provided shrimp landings data by month, year, and waterbody for 1994 through 2019. Comparing shrimp harvest by season during this period can show if and how the December through March periods are changing in relation to the rest of the year.

First, from a historical perspective, it is important to see that shrimp landings and the number of trips by year are highly variable. Over the last 26 years, annual shrimp landings have ranged from 2.3 million to 13.9 million pounds.

Next, during this same 26-year period, most of the N.C. shrimp harvest (76% of total landings) occurred in July through October.

It gets more interesting when we look at shrimp landings by waterbody and season.

Finally, when we look at shrimp landings by season, we really start to see some changes.

Again, it’s important to reiterate that very few shrimping trips typically occur during these months, because shrimp are usually not abundant in our waters then.

By the way, the predominant species associated with the December to March time period is white shrimp.

Since 2017, one year after North Carolina’s first uptick in December to March Atlantic Ocean landings, Virginia has consistently seen an increasing abundance of white shrimp in its nearshore ocean waters. This is highly unusual. North Carolina historically has been the northernmost boundary on the East Coast for commercial quantities of Penaeid shrimp species, which don’t do well in cold water. An experimental shrimp trawl fishery has expanded each year in Virginia since 2017, where six permitted vessels collectively harvested 65,000 pounds of shrimp in 2019.

It’s too early to tell whether changes in shrimp harvest by waterbody and season will be a consistent, long-term trend or simply a multi-year anomaly. These changes can at least partially be attributed to the global rise in sea surface temperatures, which is causing similar shifts for other marine finfish. Regardless, it has extended the shrimp season for N.C. fishermen and consumers requesting N.C. shrimp, a trend certainly worth watching. 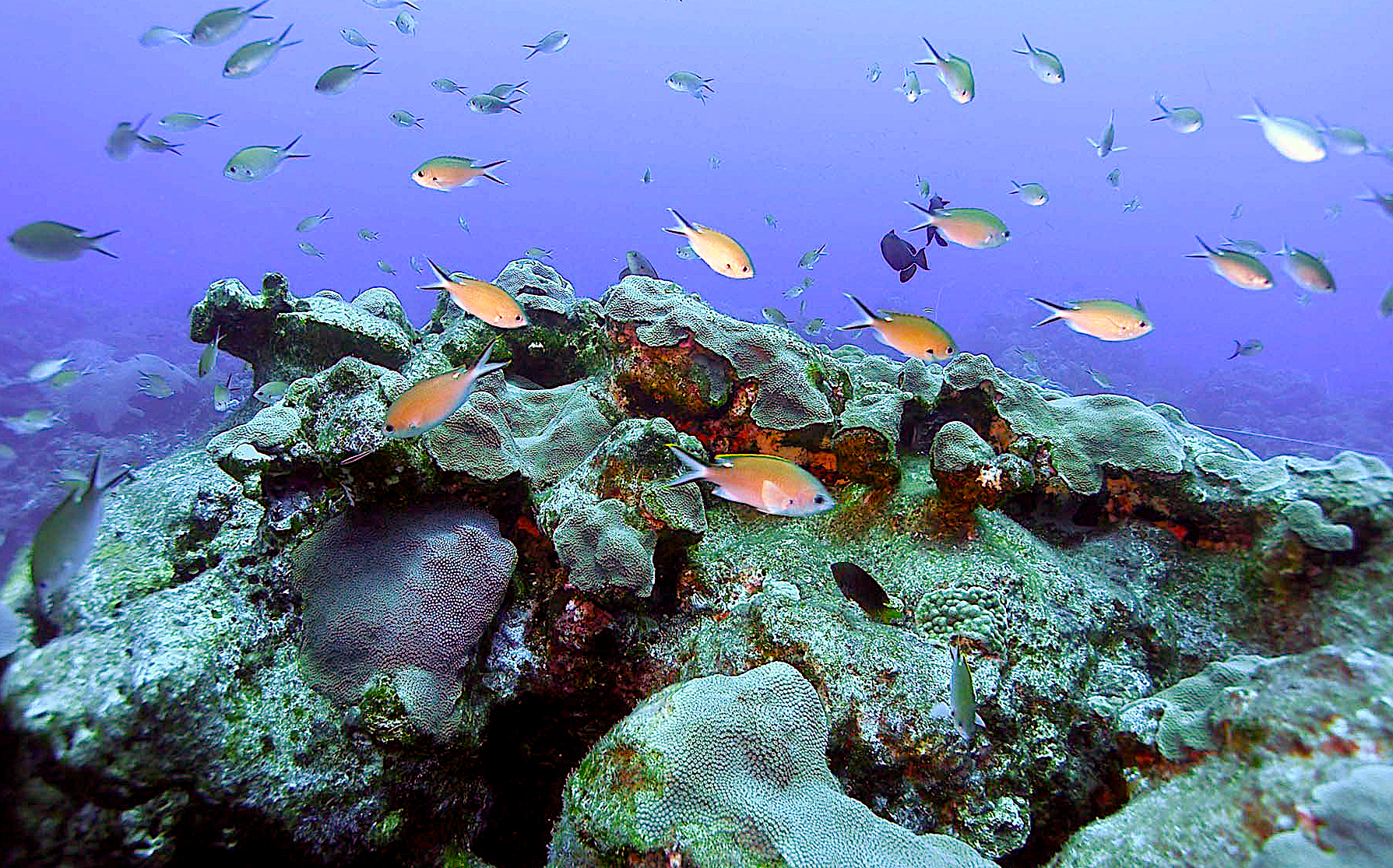 Research suggests that state-of-the-art modeling is the key to the automated identification of fish.

Fisheries managers need to correctly count and identify fish by species to estimate fish abundance and monitor ecosystem health. Traditionally, scientists have relied on lethal sampling practices to gather this information. However, whenever possible, scientists are increasingly relying on underwater video-based fish monitoring to observe and document fish populations.

Sounds perfect, right? But what’s the catch with this type of technique?

The challenge is that fish identification through video typically requires the use of skilled human video reviewers. Attempts to use computers alone have produced widely mixed results. But what if researchers could develop an algorithm that would allow computers alone to identify fish by species from video footage?

Whereas most previous automated fish identification systems used only the images to develop a computer algorithm, researchers in this study also incorporated many of the unique features of each fish species — such as body shape, color, and shading — into the process. Then, by using many different layers of data and decision steps, researchers developed and evaluated a “deep-learning neural network.”

This method was accurate 89% to 94% for fish species examined in typical underwater imagery. The higher range of classification accuracy is competitive with how well human experts identify fish by species.

This research indicates that further development of computer-based, automated fish identification classification systems from underwater imagery is warranted, and that these systems can be feasible and cost-effective alternatives to identification by humans.

The authors acknowledge that fish observed in underwater videos outside of these tests will likely be recorded under a wide range of resolutions, swimming orientations (e.g., towards the camera), speeds, and background clutter (like other fish) — criteria that will make classification success more challenging. However, this study provides important progress on a path to further advance this field of study. 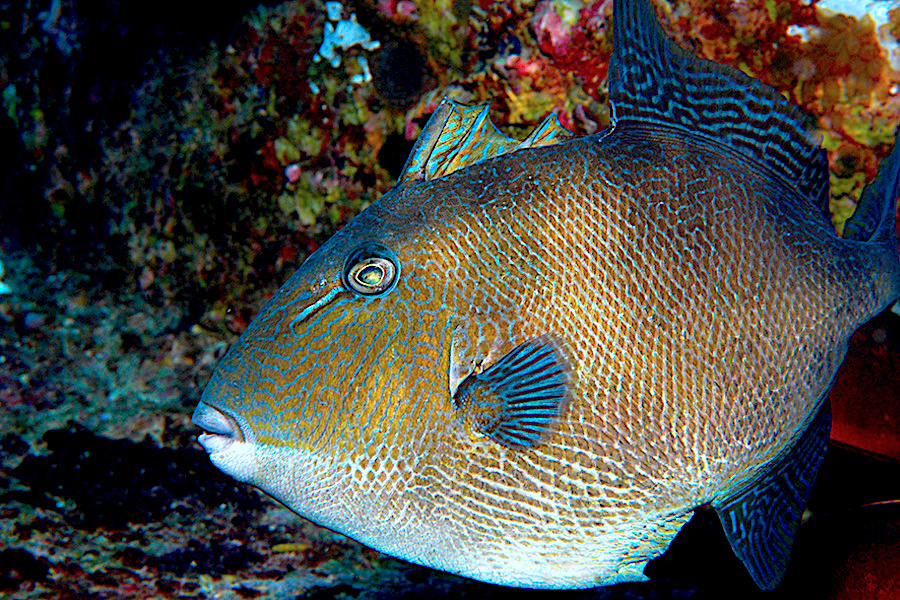 Gray triggerfish were prominent in a study of Southeast reef fish diversity. Fishery managers can use study results to predict areas of fish biodiversity at large and small scales. Photograph courtesy of NOAA.

How Diverse Are Temperate Reef Fishes On the Southeast Coast?

Temperate waters off the coast of North Carolina support a diverse reef-fish community. Saltwater fishing is wildly popular due to the accessibility of thriving reefs and wrecks in nearshore waters.

But unlike coral reef fishes in tropical environments, scientists have not studied temperate reefs to great extent. Fishery managers need data to document gradual changes in reef fish communities over time and to properly manage them for long-term viability.

Scientists wanted to know more about broad patterns and numbers of fish species inhabiting temperate reefs of the U.S. Southeast Atlantic. Using a fish trap mounted with a video camera, they collected underwater videos and fish samples at depths from 15 to 115 meters (49.2 to 377.3 feet) from Cape Hatteras, North Carolina, to St. Lucie Inlet, Florida.

Sampling occurred from spring through fall of each year. Scientists reviewed the videos to determine which fish species and families were most and least often observed on naturally occurring hard bottom reefs throughout the region. They then compared those observations to the number of species collected from fish trap sampling. Finally, the scientists examined how these observations changed with space, time, environmental conditions, and habitats.

Some species were observed much more frequently in North and South Carolina compared to Georgia and Florida, including black sea bass, bandtail puffer, white grunt, scamp, and gag.

Models suggested that the number of different fish species represented on a reef was highest at sites characterized by moderate depths, a high proportion of hardbottom, high elevation and slope of the hardbottom, and warm water.