The bright white sand dollars prized by beachcombers and coveted by craft makers were once masters of their seabottom habitat.

The elements that make a sand dollar so attractive served vital functions for the living creature: the five-pointed star in the center, the five flower petals radiating out from the star, and the five oblong holes.

Hathaway speaks with school groups, museums, and civic organizations about marine life. Sand dollars — related to starfish and sea urchins — are among the favorite topics.

Many species of sand dollars live in tropical waters of the Atlantic and Pacific oceans and are known by names such as sea cookies and sand cakes. They are built like Frisbees to allow food-filled ocean currents to pass over them easily.

When alive, sand dollars are brown or purple instead of white. They are covered in thousands of tiny spines that catch larvae, plankton, and algae and pass them along like a bucket brigade to their mouth in the center.

“If they’re brown and still have spines on them, throw them back into the water,” Hathaway says. “They’re probably still alive.”

The star on the skeleton was part of the food grooves that channel morsels to the mouth. The five-petal pattern around the star were sets of pores that extended to tube feet which allow for respiration, Hathaway says.

These sea creatures are 2 to 4 inches in diameter and live in groups by the hundreds on the sea floor, partially burrowing themselves into the sand to remain in place as they catch food. They don’t have many predators, but if threatened, they bury themselves entirely. 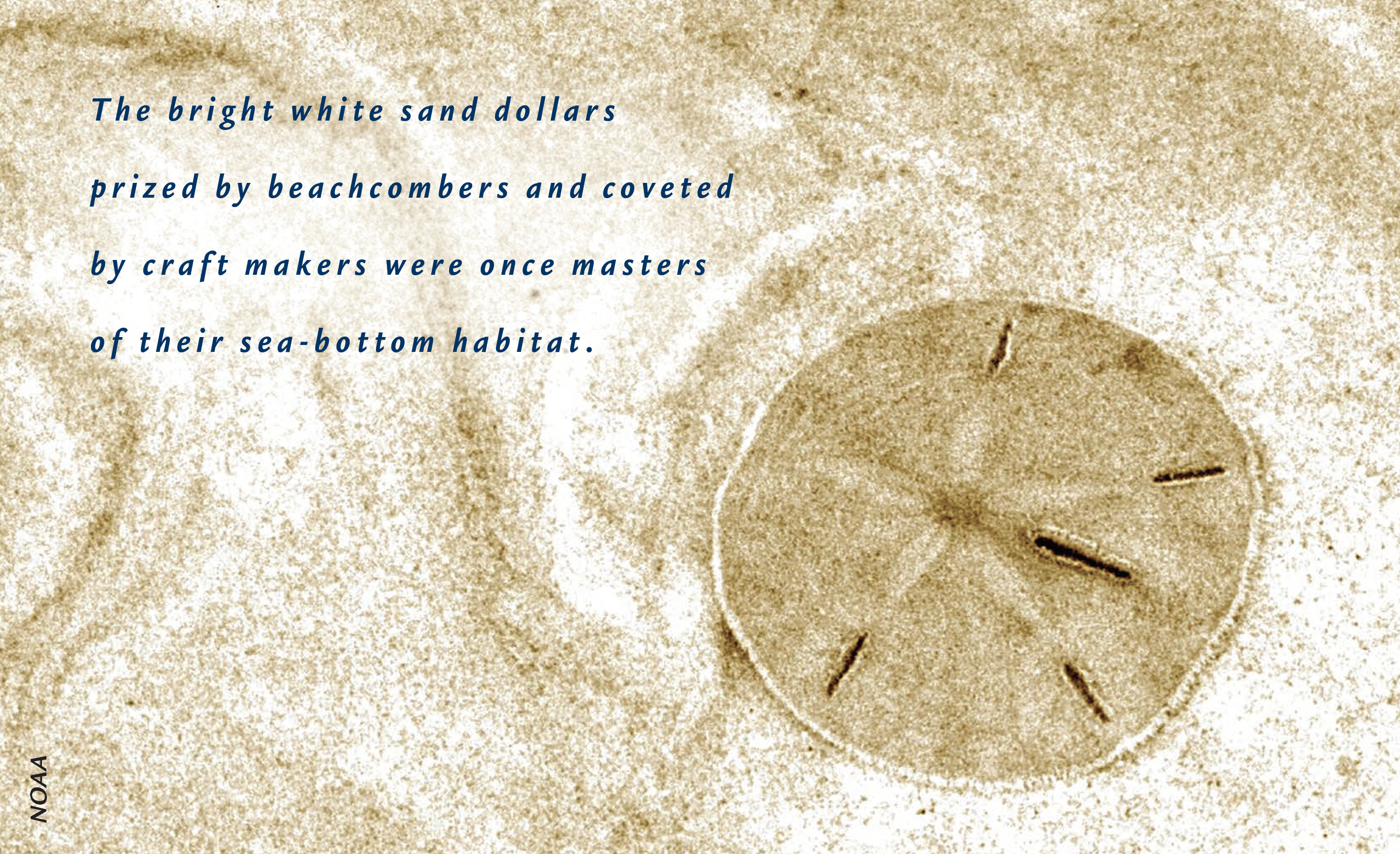 The creatures’ five oblong holes, known as “lunules,” let water pass through them to reduce the lifting pressure of the current. The holes also let sand pass through and the animals disappear more quickly into the sea bottom.

When they die and wash ashore, their skeletons become works of art.

Designs and jewelry made from them, and in their likeness, are among the most desired pieces of beach art, says Laura Parks, a manager at Seagreen Gallery in Nags Head.

“I think they are one of those things that are classic beach,” she adds.

As small, round, well-decorated objects lying on the beach, they look like coins. Legends say they are mermaid money or currency used in Atlantis, the mythical undersea city.

A well-circulated poem about sand dollars based on Christian lore tells of the flower shape representing the poinsettia and the holes depicting the wounds in Jesus. The star in the center of the petals suggests the star over Bethlehem. When broken apart, the five parts of the mouth each look like tiny white doves, a symbol of peace on earth.

Ocracoke and Portsmouth Island are among the best places on the Outer Banks to find sand dollars, but they can be found all to the way to Corolla, Hathaway says.

The best times are after storms and early in the morning before other collectors get there.

“One of the most frequent questions I get from tourists,” she says, “is ‘Where can I find sand dollars?’”

Find critters of all kinds in Coastwatch.

This story originally appeared in the Virginian-Pilot.