Yener Ulus is investigating how mercury changes from its inorganic form — which is less likely to transfer to animals or people — to a more toxic form when saltwater begins invading freshwater wetlands.

Coastal Currents
Mercury on the Rise

As sea levels continue to rise with each passing year, researchers increasingly are focusing their attention on how the change may impact coastal wetlands. While there is an abundance of research on the effects of sea level rise on the coast, few studies have addressed how rising seas might affect deposits of mercury, an environmental pollutant.

Yener Ulus, a Ph.D. student in environmental health sciences at the University of North Carolina at Greensboro, is tackling the question of mercury’s impacts on freshwater coastal wetlands. With support from a joint NorthCarolinaSeaGrant–WaterResources Research Institute graduate research fellowship, he is investigating how mercury changes from its inorganic form—which is less likely to transfer to animals or people—to a more toxic form when saltwater begins invading freshwater wetlands.

“We already know there is mercury pollution,” Ulus says. “But we don’t know what this perturbation would look like with sea level rise, hurricanes, storm surges, and floods.”

Mercury is present in almost every waterbody and is one of the most common pollutants in North Carolina’s freshwater fish. Thus, it potentially threatens the health of people consuming those fish. However, the form of mercury dictates the level of threat that this pollutant poses to ecosystems and to human health.

When saltwater invades freshwater wetlands, it can carry abundant sulfate into these systems, which sets off a chain reaction in the wetland.

“There are sulfate-reducing bacteria that use the sulfate,” Ulus explains. “As a byproduct it converts inorganic mercury into organic mercury — which we call methyl mercury, the most toxic form. This methyl mercury is in the water, sediment, the plankton, small insects, fish, and eventually humans who eat the fish.”

Into the Field — and Hurricane Dorian

When he gathers samples to study, Ulus and his team must drive five hours from Greensboro to his wetland study sites in Dare and Tyrrell counties. He dedicates up to five more hours to collecting sediment, water, and biota samples, then makes the return drive back to his lab. Even when Hurricane Dorian made its way to North Carolina’s coasts, he visited his sites for samples prior to the storm surge, while local towns were evacuating.

“One week after the hurricane passed, we went back to collect samples,” he says. “So, basically that gave me a chance to see how methyl mercury will vary when you have excessive amounts of sea water intrusion from storm surge.”

According to Ulus, those results were “amazing.” There was, indeed, an increase in methyl mercury.

With a clearer picture of the methyl mercury levels in the water and sediment at his wetland sampling sites, Ulus is beginning to ad- dress how the food chain, in turn, might reflect these levels. He hopes to sample more biota from his wetland sites to understand how methyl mercury moves through the food web, which he believes is essential for understanding how the toxin may affect human communities. 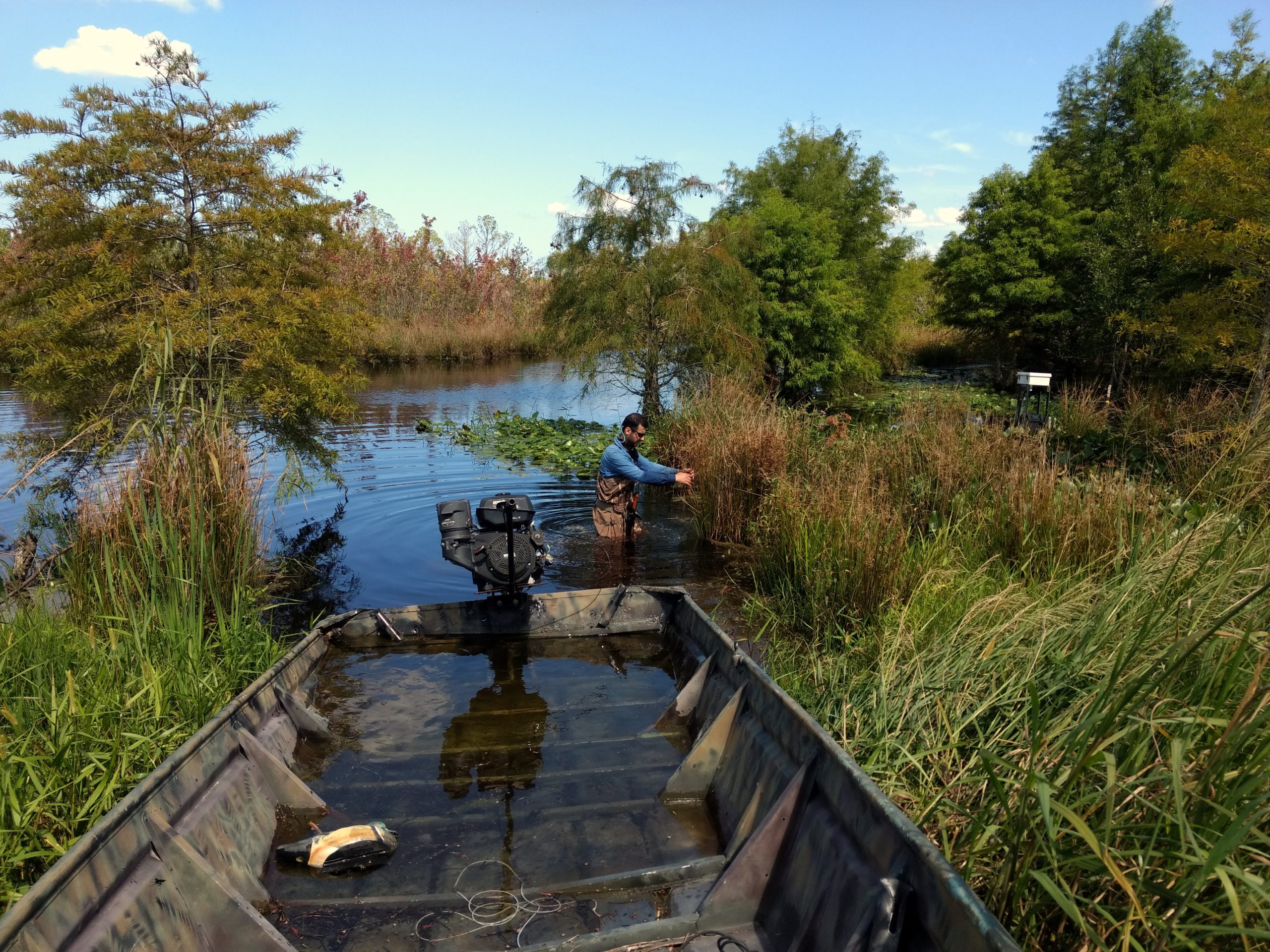 With a clearer picture of the methylmercury levels in the water and sediment at his wetland sampling sites, Yener Ulus is beginning to address how the food chain, in turn, might reflect these levels.

Ulus grew up in Arsuz, Turkey, a small green town near the Mediterranean Sea that relies on fishing and farming.

“I wanted to be the person who saves the environment,” he says, “while also being a good influence to those around me.”

He takes his research outside of his lab and field sites to spread awareness about mercury pollution in coastal areas. As a volunteer with UNCG’s Science Everywhere program, he teaches students from kindergarten to high school about mercury as a pollutant.

In Tyrrell County, one of the poorest counties in North Carolina and the location of one of his sampling sites, Ulus says many people don’t know about mercury.

“So, one of my purposes is to explain what’s going on in their own community about mercury pollution,” he explains. “Because most of them have no idea about that.” He contacted the town manager in Columbia, North Carolina, on the Albemarle-Pamlico Peninsula, about the need to inform town officials and residents about mercury pollution.

Ulus also presented his research in Poland at the 14th International Conference on Mercury as a Global Pollutant. In addition, he has presented and discussed his findings with government representatives and communities in his home country.

For Ulus, protecting human health is paramount, but he also emphasizes the obligation to protect and preserve wildlife and natural beauty.

“We should provide a good environment for any wildlife,” Ulus says. “When I go [to my wetland sampling sites] I see the blue herons — they are flying. Or I see the bears! This is our treasure, you know?”