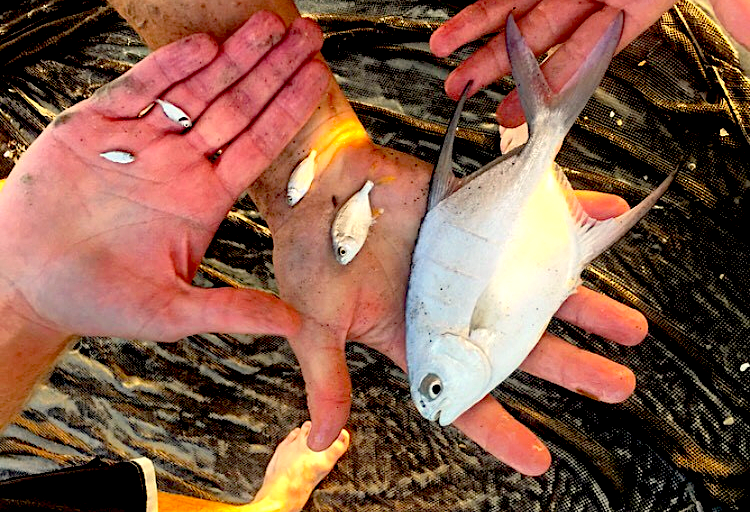 WHAT FISH SPECIES LIVE IN THE SURF ZONE?
At Wrightsville Beach, 84 different fish species use the surf zone.

The surf zone is an important region for fish communities and anglers alike.
Some fish are known to inhabit the surf zone throughout all of their lifestages, such as particular species of silversides and other bait fish. Others — such as spot and red drum — use the surf zone as waypoints between deep ocean habitats and estuaries. The surf zone also serves as important nursery habitat for the young of many species, including recreational favorites like Florida pompano and flounder.

This popular environment is surprisingly understudied. For example, in North Carolina we have had little established information on full fish communities that inhabit the surf zone.

How many fish species live in or use the surf zone? How long do they stay there? How does the diversity of the fish community change across seasons?

Researchers from the University of North Carolina Wilmington investigated the surf zone fish community at Wrightsville Beach to determine which species inhabit the area and when they are present.The researchers repeatedly collected fish using long-haul seine nets at seven sites along the beach and identified and counted the number of fish collected from each pull.

The research team identified 84 different species caught in the surf zone at Wrightsville Beach over 11 years. Of the total number caught, 10 species made up 95% of the total catch, meaning that a few species use this habitat in much greater numbers than others. This finding suggests that the surf zone may represent an important habitat for these species. 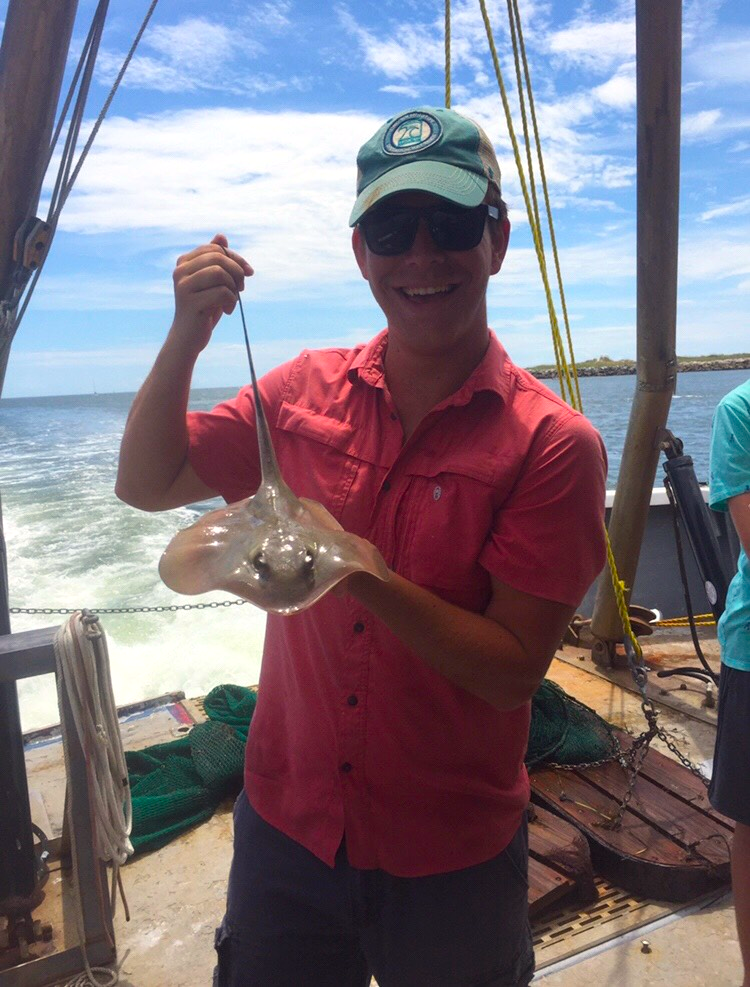 • What else did they find?

These researchers also found that the total number of fish in the surf zone peaks in the warm summer months, as does the diversity of the fish community. In June through August, a typical angler at Wrightsville Beach is likely to find more fish and more species in the surf.

As our understanding of the surf zone fish community increases with findings like these, we can begin to highlight fish species that rely on the surf zone for important stages of their lives. Many of the fish species that live in the surf in their early stages eventually move into offshore waters and represent important recreational and commercial fisheries. It is important to understand how these fish use the surf zone (for instance, as a nursery for their young or as a permanent home), so that we can ensure careful management and protection of this habitat and these fish.

WILL COBIA RETURN TO THEIR SUMMER SPAWNING HABITAT?
Electronic tagging reveals the answer.

Cobia are a moderately-sized open- ocean fish that recreational anglers love to catch for their aggressive fight and excellent table fare. Researchers have identified two genetically distinct populations along the U.S. coastline: the Atlantic stock and Gulf of Mexico stock.

Much of the data used to delineate thesestockscamefromfishtaggedinthe southern portion of their range. Additionally, a genetic study found differences between inshore and offshore cobia in North Carolina and Virginia.

But was the accepted boundary between the Atlantic and Gulf populations valid? Were there additional differences among cobia within these areas?

Researchers at NC State investigated movement patterns of tagged cobia to see if the species were homing to inshore or offshore areas during spawning months. The researchers surgically implanted 98 tags in cobia captured in North Carolina and Virginia. They also established an acoustic receiver array between Cape Lookout and Cape Hatteras and extending east to the continental shelf break to listen for the tagged fish. 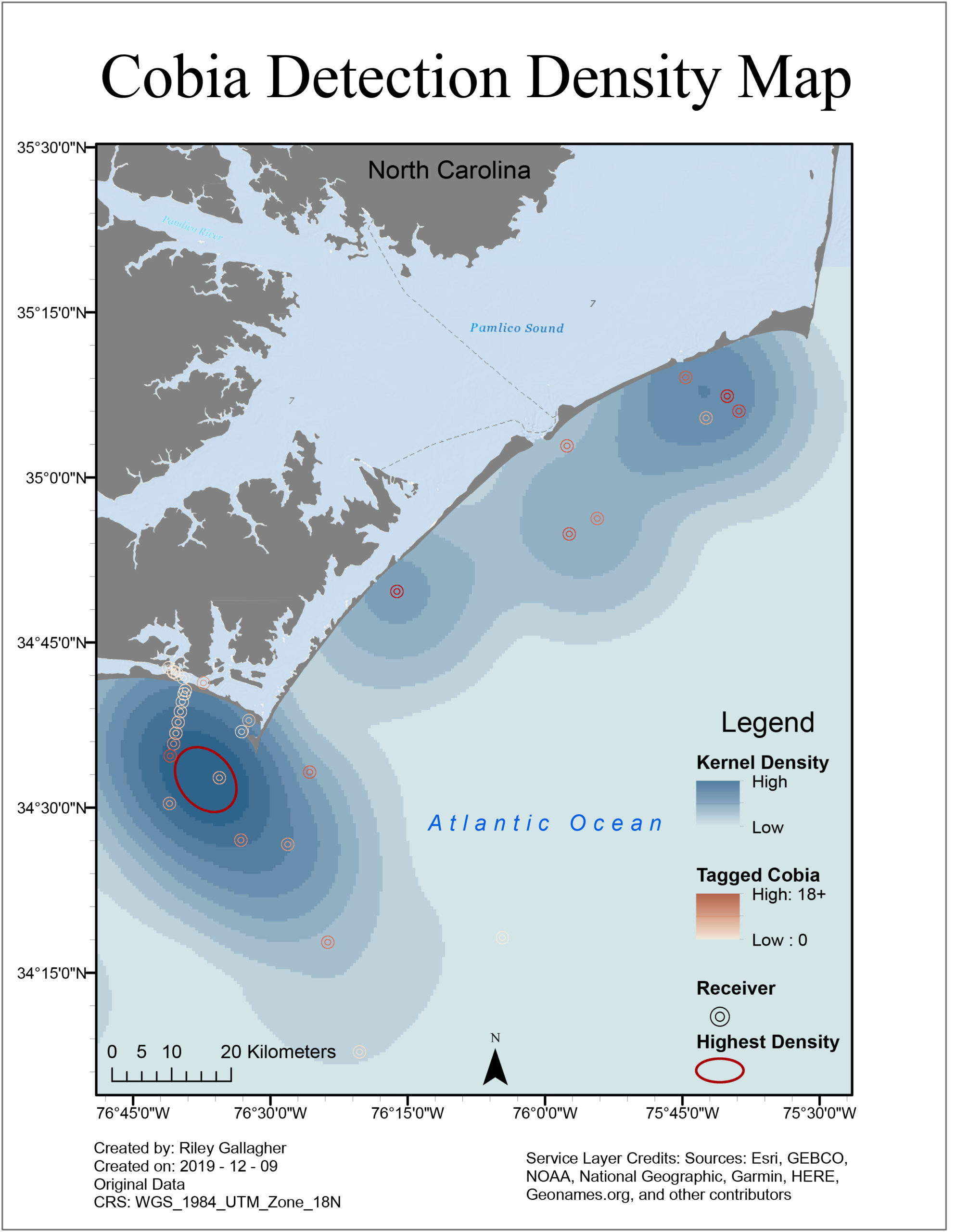 During late spring to early fall, researchers detected 45 of 54 cobia tagged in 2018. The bulk of these fish were inshore in Chesapeake Bay, with a smaller number detected in offshore ocean waters between North Carolina and Delaware.

• What else did they find?

As water temperatures dropped below about 68°F, cobia began migrations to overwinter locations. During winter, a few cobia were detected at outer continental shelf sites off North Carolina, and approximately

Researchers identified 84 different species in the surf zone at Wrightsville Beach.Typically, the total number of fish peaks during the summer. One quarter of cobia were detected south of the current stock boundary in the known “mixing zone” between Cape Canaveral in Florida and the Georgia-Florida state line.

As water temperatures warmed above 68°F in the spring, cobia began moving northward and westward. In summer 2019, 31 out of 32 cobia returned to their 2018 locations.

These findings provide strong evidence that cobia show a tendency to return to a particulararea.Theresearchconfirmed understandings of where the boundary lies between cobia populations and may explain genetic differences between inshore and offshore cobia.

Future research will determine if there are differences between inshore and offshore cobia that warrant different management strategies.

DO YOU HAVE WHAT IT TAKES TO BE A SEAFOOD SLEUTH?
Citizen scientists collected seafood samples to help determine seafood mislabeling — and they did it as well as the experts.

If you’ve paid any attention to the national and global seafood news over the past decade, it should come as no surprise that seafood mislabeling can be a common problem. A growing body of work suggests that between 19% and 30% of seafood is mislabeled globally. Research demonstrates that often cheaper or less desirable species are illegally substituted for the items sold.

The traditional method for gathering seafood samples for DNA identification involves scientists both collecting and processing the data and following strict procedures. But sometimes the desired study design doesn’t match what scientists actually can do within the constraints of manpower, funding, and geography.

Oceana, a conservation organization, conducted one of the largest studies of its kind to evaluate seafood mislabeling in the U.S.market place from 2010 to 2012.Those results have been reported extensively: 33% (421 of 1,243) of seafood samples collected across the country were mislabeled.

One of the unique aspects of the Oceana study was that the organization mobilized its members across the country in a grassroots effort to serve as citizen- scientist data collectors. 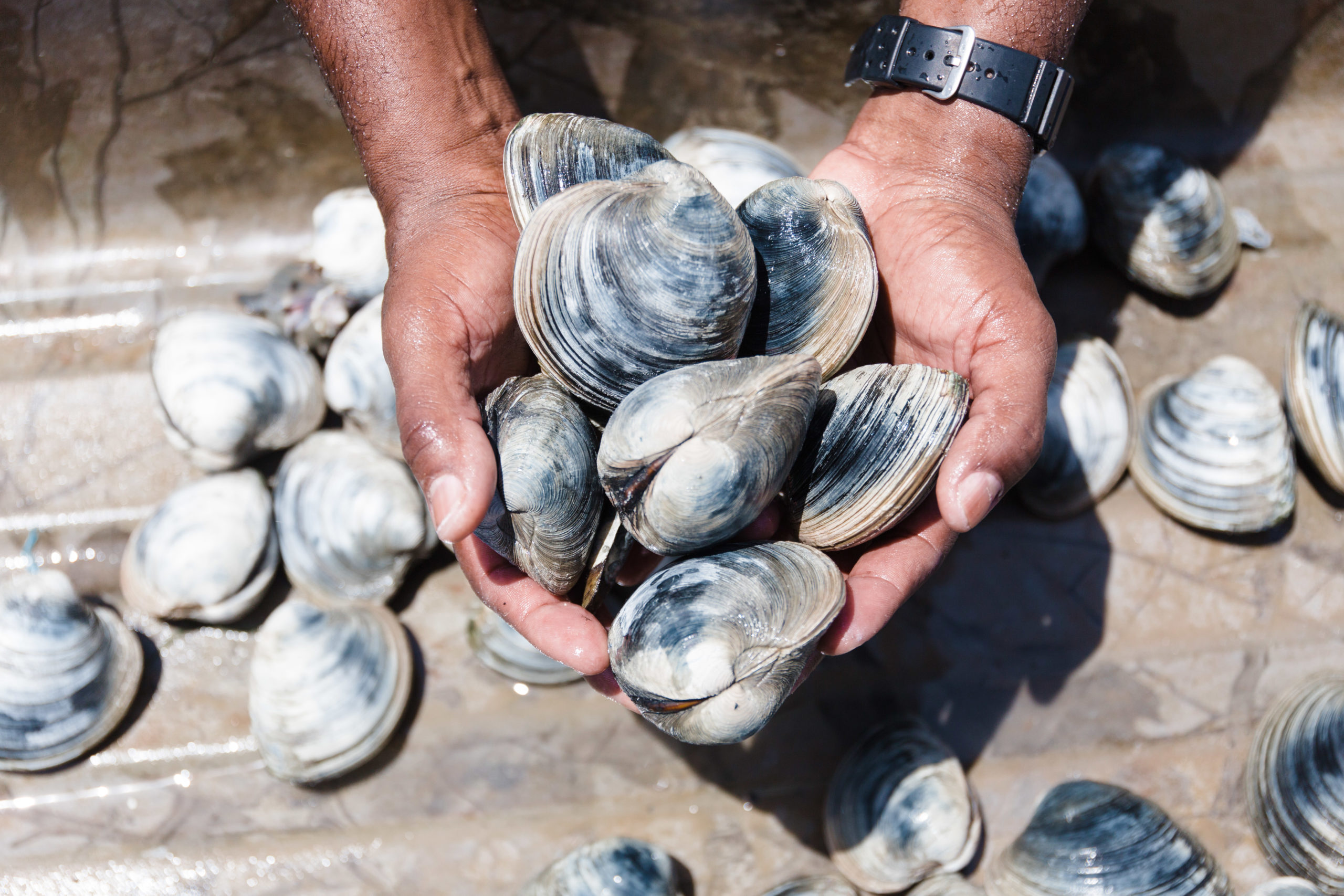 Investigators first perfected a simple sampling kit that the public could use to collect and submit seafood samples for DNA testing.

Investigators then used an email database of 55,346 Oceana members in 11 major U.S. metropolitan areas to announce the seafood fraud detection project and recruit citizen scientists. Volunteers selected two samples from multiple species available at grocery stories, retail markets, and restaurants in their area. Participants received no compensation for purchasing the seafood, and the sampling procedure for DNA analysis required them to save only a small raw or cooked portion. The research project paid for the DNA analysis.

One thousand fifty-eight of members signed up to be “seafood sleuths,” and each received a seafood test kit in the mail. Volunteers recorded information as the scientists had requested. Approximately 33% of the seafood sleuths returned 631 samples, nearly half of the samples collected for the entire study.

The citizen-science approach also provided a more informed and engaged online membership, who continued to take action to advance seafood fraud policies with policymakers long after the completion of the study. The project likely contributed to the creation of the Seafood Important Monitoring Program, which today requires catch documentation and traceability for select species brought into the United States.

The U.S. Food and Drug Administration keeps track of seafood items sold (or thought to be sold) in U.S. establishments. This list contains scientific and common names of 1,957 individual species. go.ncsu.edu/seafood-list