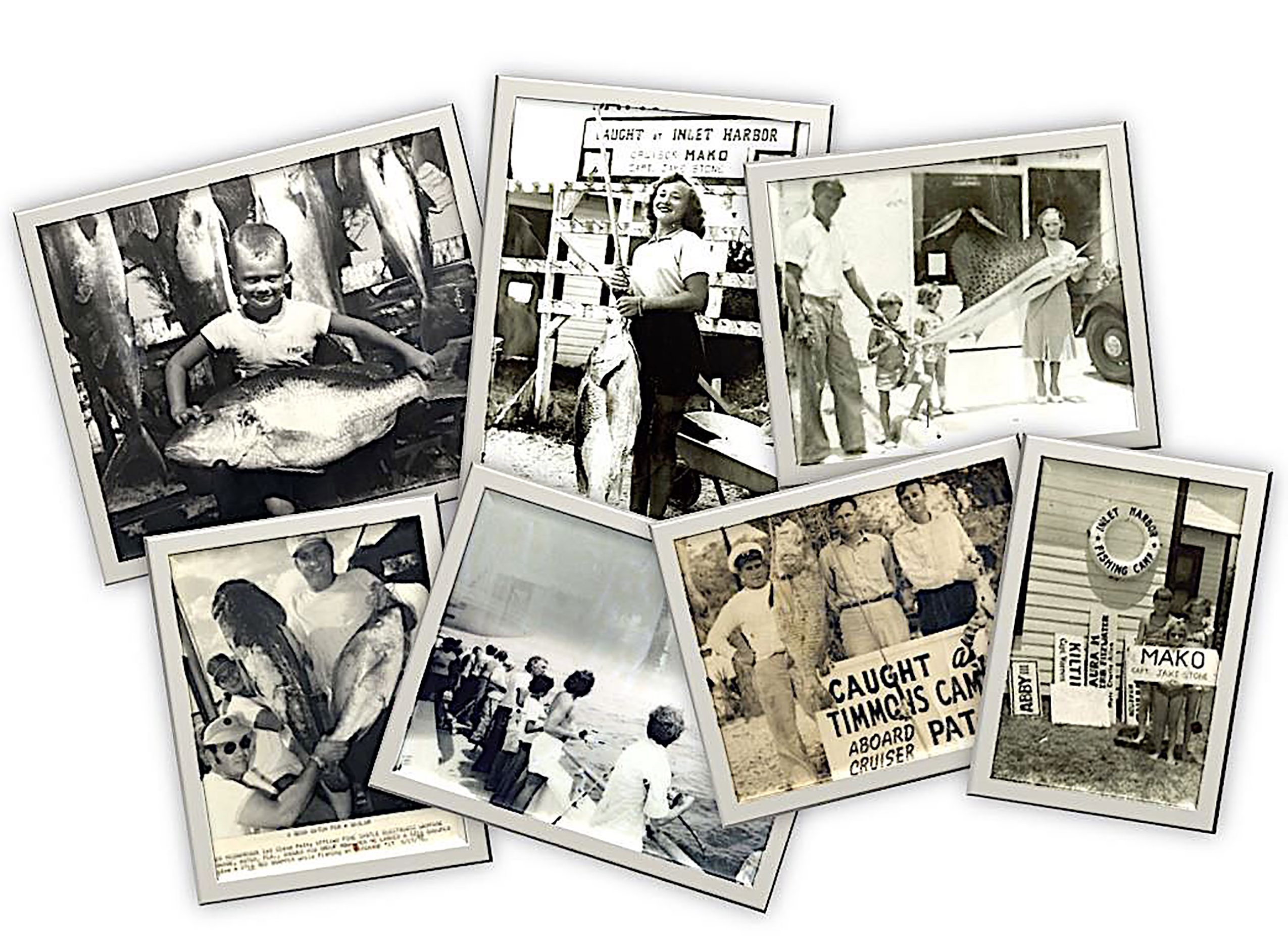 from the popular blog series on the latest science for anglers 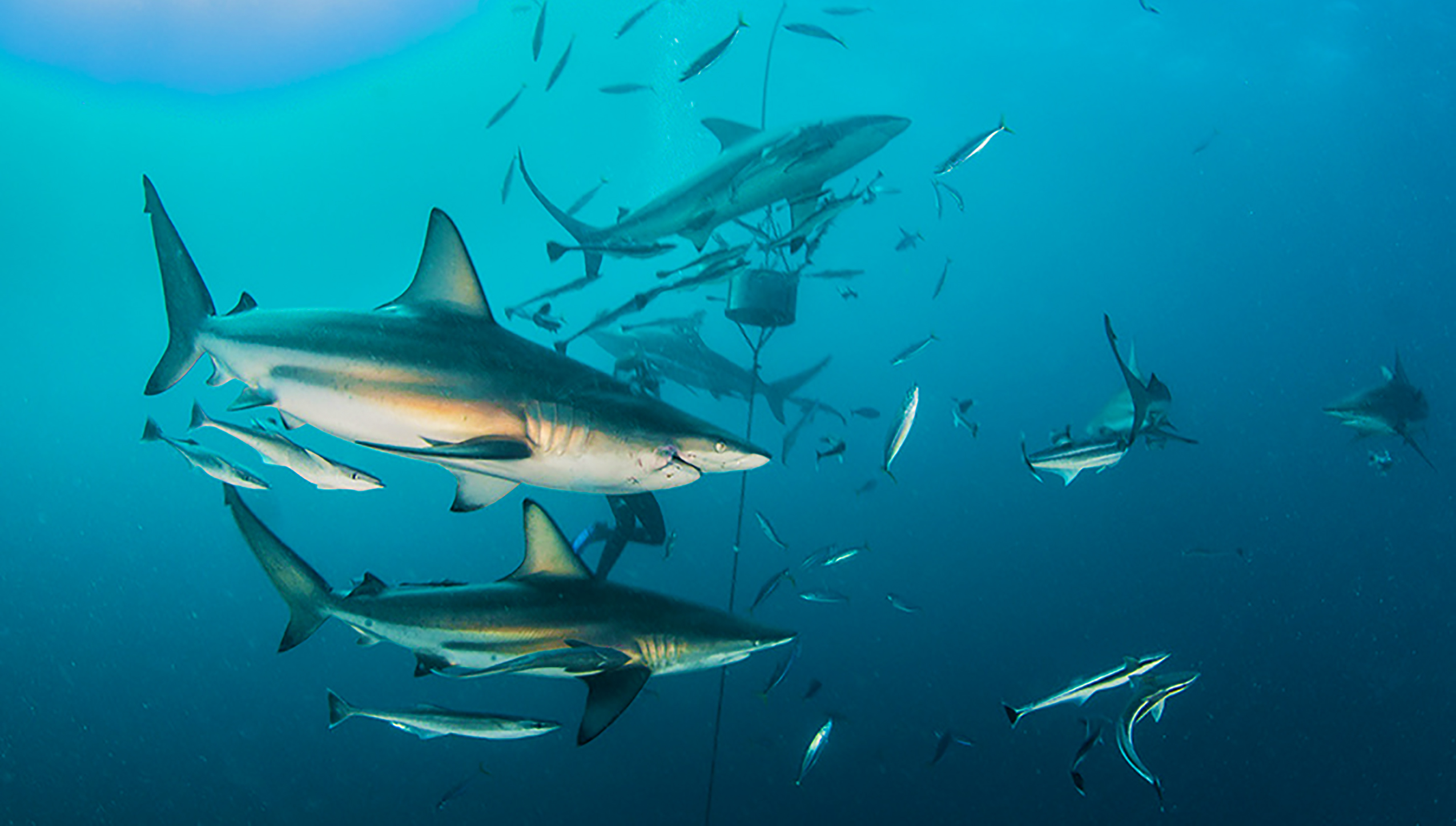 Prime angling from fishing piers is upon us. But, spring also ushers in the increased presence of larger sharks off North Carolina’s beaches, among them, blacktips. For those who would rather not mess with catching a shark – and who would rather keep their bait – here are some factors that could influence the probability of encountering one.

Fishing piers and other manmade coastal structures often become a hotspot for various species of fish. The blacktip shark is one of the most common shark species people spot at fishing piers on the North Carolina and South Carolina coast.

Anglers often have seen blacktip sharks feeding off their fish scraps, but researchers have believed these sharks frequent piers based on additional factors, notably tides and temperatures, as well as other environmental cues.

However, can the presence of anglers also affect where and why blacktip sharks gather?

If such patterns exist, revealing them could help to clarify the shark’s behaviors and help to design measures to minimize chances of incidental capture and injury at piers, especially since the current population trend for blacktip sharks is unknown.

Researchers from Coastal Carolina University and the University of Miami collected data on the presence of blacktip sharks along the northeast coast of South Carolina. They captured and tagged 12 of the species with transmitters and monitored their movements between five different piers from July to November in 2016. They repeated the process with four of the five piers from May to November of the following year.

Researchers detected 9 of the 12 tagged sharks post-release but detected a majority of the sharks only infrequently at piers.

The presence of blacktip sharks at fishing piers increased during the day with increasing tidal height, barometric pressure and angler count.

Wind speed and water turbidity did not appear to affect the presence of blacktip sharks.

Most of the blacktip sharks remained at the same pier where researchers originally had tagged them. The sharks made a higher number of visits and showed more movement around South Carolina’s Pier 14, 2nd Avenue Pier, and MBSP Pier.

Although this study drew on a very small sample size, it suggests that the availability of food and prey may be influencing the behavior of blacktip sharks at piers. Fish scraps and bait from anglers provide food sources for these sharks and attract other fish, which in turn also become prey for blacktip sharks. Such considerations can help inform management of coastal fish populations and fisheries. 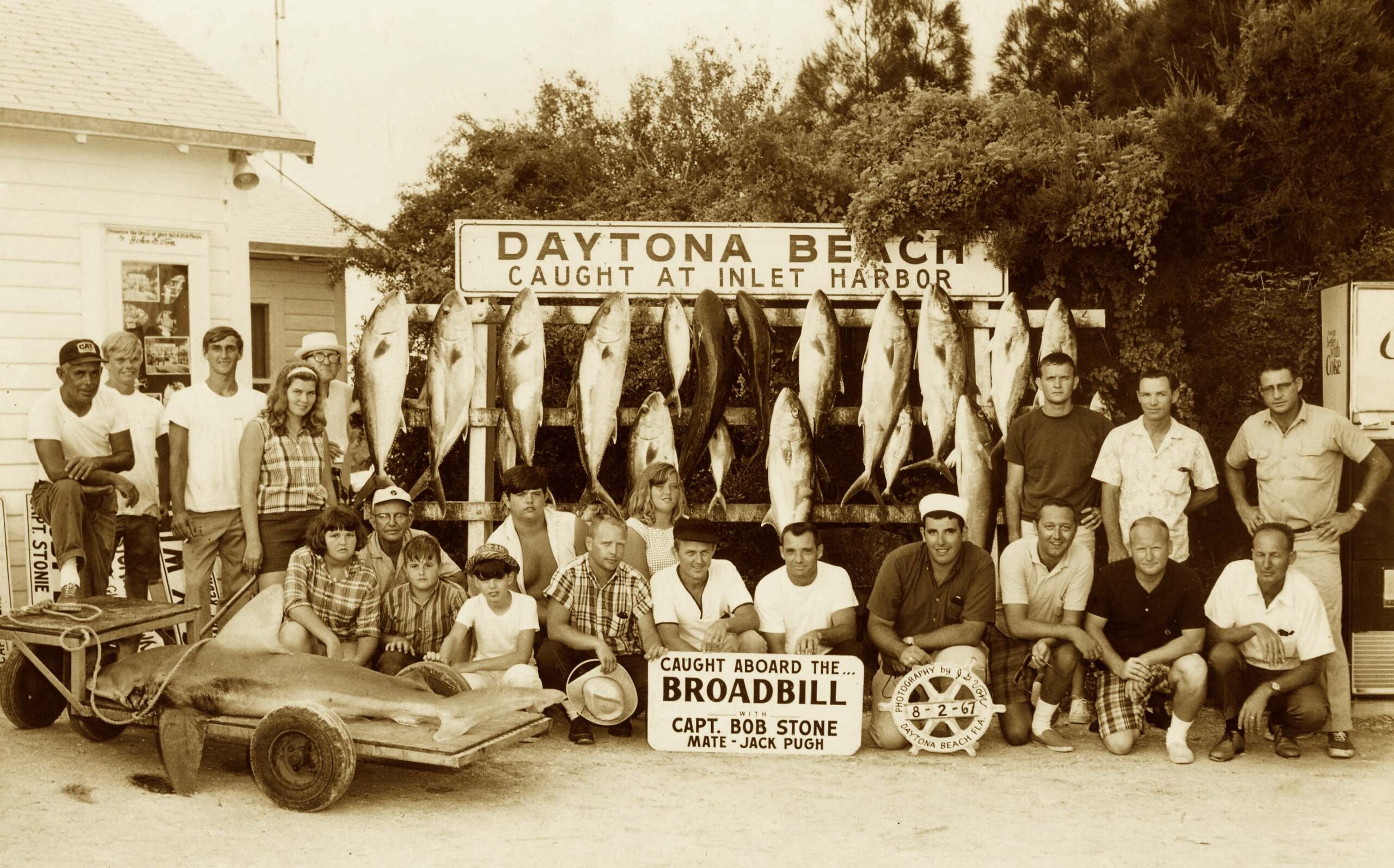 Daytona Beach in 1967 (here) and a montage of historic dock photos (lead image above), courtesy of Rusty Hudson & the Hudson, Timmons, & Stone families

Citizen scientists are helping to fill in the gaps.

FISHstory (rhymes with “history”), the South Atlantic Fishery Management Council’s citizen science project, will take participants back in time to the docks of Daytona Beach. The project plans to train volunteers to identify and count fish in historic fishing photos.

Knowing the species, number, and size of fish caught over time is critical in order to understand the health of a fish population. In particular, the diversity and length of these fish can be important for estimates of stock productivity.

However, there is little information available in the South Atlantic, from North Carolina through the Florida Keys, prior to the 1970s on overall catch or size composition in the charter and head boat fisheries. Historic dock photos, an untapped source of this important biological data, might help to recreate this data.

What are they studying?

The FISHstory Team is collaborating with Rusty Hudson, a retired fisherman, who has provided over 1,300 historic dock photos from his family’s head boat fleet in Daytona Beach from the 1940s to 1970s. Due to the large number of photos, the South Atlantic Fishery Management Council is turning to citizen scientists to help gather data.

FISHstory will gather information on species composition and length. Using Zooniverse, a crowdsourcing platform that hosts citizen science projects, volunteers will identify and count the fish and anglers in the photos. Tutorials and training materials are available, so even people unfamiliar with fish can help collect data.

The FISHstory team also will develop a method to estimate fish lengths from the historic photos. The method will be tested on King Mackerel, and, if successful, can be adapted to determine the lengths of other species, too.

What could they find?

FISHstory will launch in May. The project will help us better understand if there were changes in overall catches or seasonality of catches from the docks in Daytona during the 40s, 50s, 60s and 70s that we can compare with data from modern catch monitoring programs.

Additionally, counting the anglers in these photos could provide a rough estimate of fishing effort, and estimating fish lengths also might provide insight on changes in the size of fish caught over time.

Data gathered from this citizen science project exploring fisheries of the past could help us better understand the health of fish stocks today and into the future. If the FISHstory pilot project is successful, it could lead to the study of other fishing fleets throughout the South Atlantic and elsewhere.

The project needs citizen scientists. Do you want to test your fish identification knowledge? Reach out to us at  allie.iberle@safmc.net or julia.byrd@safmc.net to learn more. 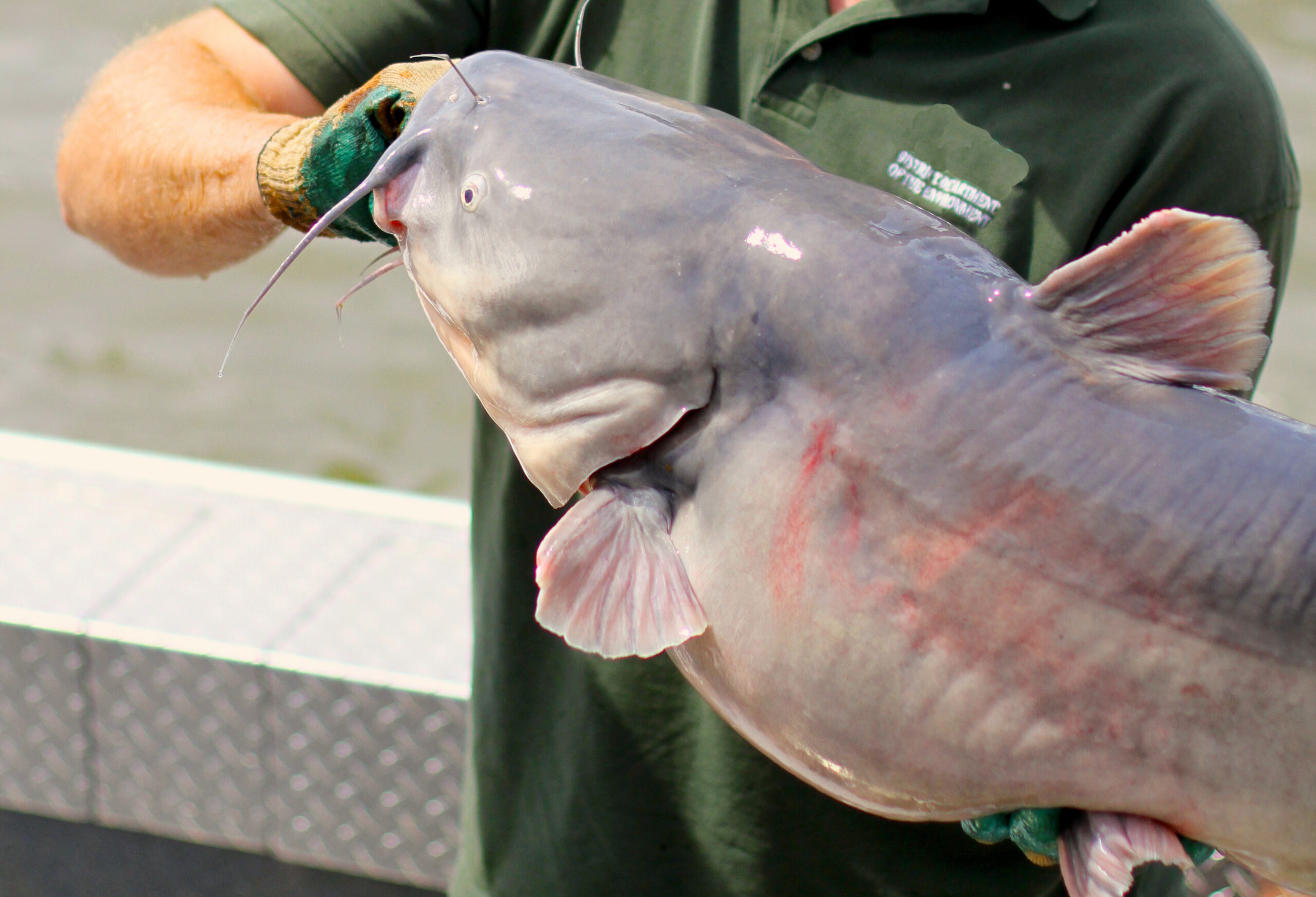 The formidable blue catfish, courtesy of US Fish & Wildlife

In February, in conjunction with the American Fisheries Society’s Southern Division Annual Meeting in Little Rock, the third International Catfish Symposium focused on communicating catfish science. The symposium included research on “hand-crank electrofishing” and its impact on nonnative catfish.

Hand-crank electrofishing (HCE) — or “telephoning” — is a recreational fishing technique that has been legal in North Carolina since 1985. As the name suggests, HCE involves using a telephone generator to produce low-voltage alternating current by turning a hand crank, which stuns catfish.

Nonnative catfish are voracious eaters and can really cause harm to food webs. Like many invasive fish, resource managers have been trying to get anglers to keep them and eat them.

Flathead catfish, blue catfish, and channel catfish have invaded North Carolina’s rivers, and catfish anglers have enjoyed fishing these species for their trophy sizes. However, the decline of populations of native fish species in our rivers, in fact, is partially due to the invasion of nonnative species of catfish.

North Carolina remains the only state to allow HCE as a method for dealing with the catfish invasion. Anglers are concerned, though, that HCE might remove too many trophy-sized catches and disrupt the biting patterns of catfish.

Researchers focused on three nonnative catfish species to understand better whether, when anglers used HCE, they displayed differences from other fish populations.

The researchers did find differences in several aspects of the populations of flathead catfish, blue catfish, and channel catfish in river reaches where HCE was allowed. These differences, however, were likely attributable to the variety and numbers of nonnative catfish, as well as other fishes in the river, in addition to environmental factors that include water depth and bottom structures.

With data from the project, researchers and policymakers can develop alternative techniques to limit the population growth of invasive catfish. In particular, the findings could shed light on if and how to modify and use HCE for ecological reasons.

The team found that hand-crank electrofishing does not significantly affect catfish populations. However, overall angler harvests do make an impact. A better understanding of the catfish sizes and species that anglers target and harvest would inform the management of nonnative catfish.