Above: A close-up of a crystal skipper butterfly’s body and head. Courtesy of the USGS Native Bee Inventory and Monitoring Lab.

When Al and Virginia Williams gaze out the back windows of their vacation home in Atlantic Beach, they see the stuff of nostalgia: a large sand dune that Al first encountered as a kid. Both sets of his grandparents had homes in the area, and he spent ample time exploring the environs. “He has fond memories of that one massive dune,” Virginia says.

The sentimental value of that stately sand pile — Virginia estimates that it’s higher than their raised, two-story house — is one reason the couple decided to purchase the dune from a vacation rental company. But they also wanted to preserve the natural landscape beyond their backyard. “It’s quite a pretty dune,” she says. “We certainly didn’t want to see it developed.”

What they didn’t know at the time was that by acquiring the mound they were helping to safeguard habitat vital to another coastal dweller: a native butterfly colloquially called the crystal skipper (Atrytonopsis quinteri), one of a family of butterflies known for their darting flight habits.

As far as we know, crystal skippers exclusively live on just a few North Carolina islands, including Bogue Banks, human-made Radio Island to the east, and Bear Island to the west.

Globally rare but locally abundant, the crystal skipper is a state mascot of sorts. “There’s something a little magical about a little brown butterfly that flits around the dunes,” says Carol Price, conservation research coordinator for the North Carolina Aquariums. “This is a real North Carolina treasure.”

Crystal skippers rely on dune vegetation that grows in the swales between beach-fronting sea oats and deeper-set scrub thickets. Adult butterflies sip nectar from various native flowers, such as southern dewberry and species of morning glory. But crystal skipper caterpillars have a more restricted diet: They feed solely on a native grass called seaside little bluestem.

The butterfly “persists in one of the starkest, harshest environments in our coastal ecosystems,” Price says. “It is really a tough place for a butterfly to make a living. And it is not just associated with that habitat — it’s dependent on that habitat.”

Crystal skippers rely on dune vegetation that grows in swales between sea oats and shrub thickets. Adapted from an illustration by David Williams for The Dune Book.

Over the past several decades, urbanization along Bogue Banks has fragmented and degraded habitat where seaside little bluestem thrives. Virginia Williams, who briefly lived in Pine Knoll Shores with her family before they moved to Morehead City in the 1980s, has seen the changes firsthand: “It’s developed incredibly in the last 30 years,” she says.

Despite her long ties to the area, she first learned about the crystal skipper last year, when she met Gloria Putnam, coastal resources and communities specialist for North Carolina Sea Grant. Putnam, Price, and colleagues were in the process of revegetating areas important to crystal skippers; the Williams dune was a prime site for replanting.

The dune enhancement project is integral to a larger, multi-partner effort to better understand and preserve the butterfly — not just for the insect’s sake, but for its ecosystem.

“When it comes to barrier island dunes, we talk about maritime forests and sea oats, but the narrow strip of land in between gets overlooked,” Putnam says. “For me, the crystal skipper can be the ambassador for this important stretch of habitat, helping to capture people’s attention and interest in preserving it.”

What’s in a Name?

Science first brushed with the crystal skipper in 1978, when entomologist Eric Quinter, of the American Museum of Natural History, netted a couple specimens during an expedition along coastal North Carolina. He later passed them on to a Smithsonian entomologist and skipper expert named John Burns.

Burns “immediately recognized the Atlantic Beach specimens as something different,” Michigan State University conservation ecologist Nick Haddad writes in his book, The Last Butterflies: A Scientist’s Quest to Save a Rare and Vanishing Creature. Eventually Burns assembled enough convincing evidence to call the insect a new species, publishing his case in the Journal of the Lepidopterists’ Society in 2015.

Research conducted in the mid-2000s by NC State University doctoral student Allison Leidner contributed critical insight into what we know about crystal skippers. With funding from North Carolina Sea Grant, Leidner used field and lab techniques to investigate butterfly movement and genetics, with an eye toward addressing their conservation status.

“She put crystal skipper on the map,” says Haddad, who was Leidner’s thesis advisor at NC State at the time. Leidner even coined the butterfly’s moniker, drawing inspiration from Bogue Banks’s tourist-friendly nickname — Crystal Coast — and from the insect’s sugary white wing spots. 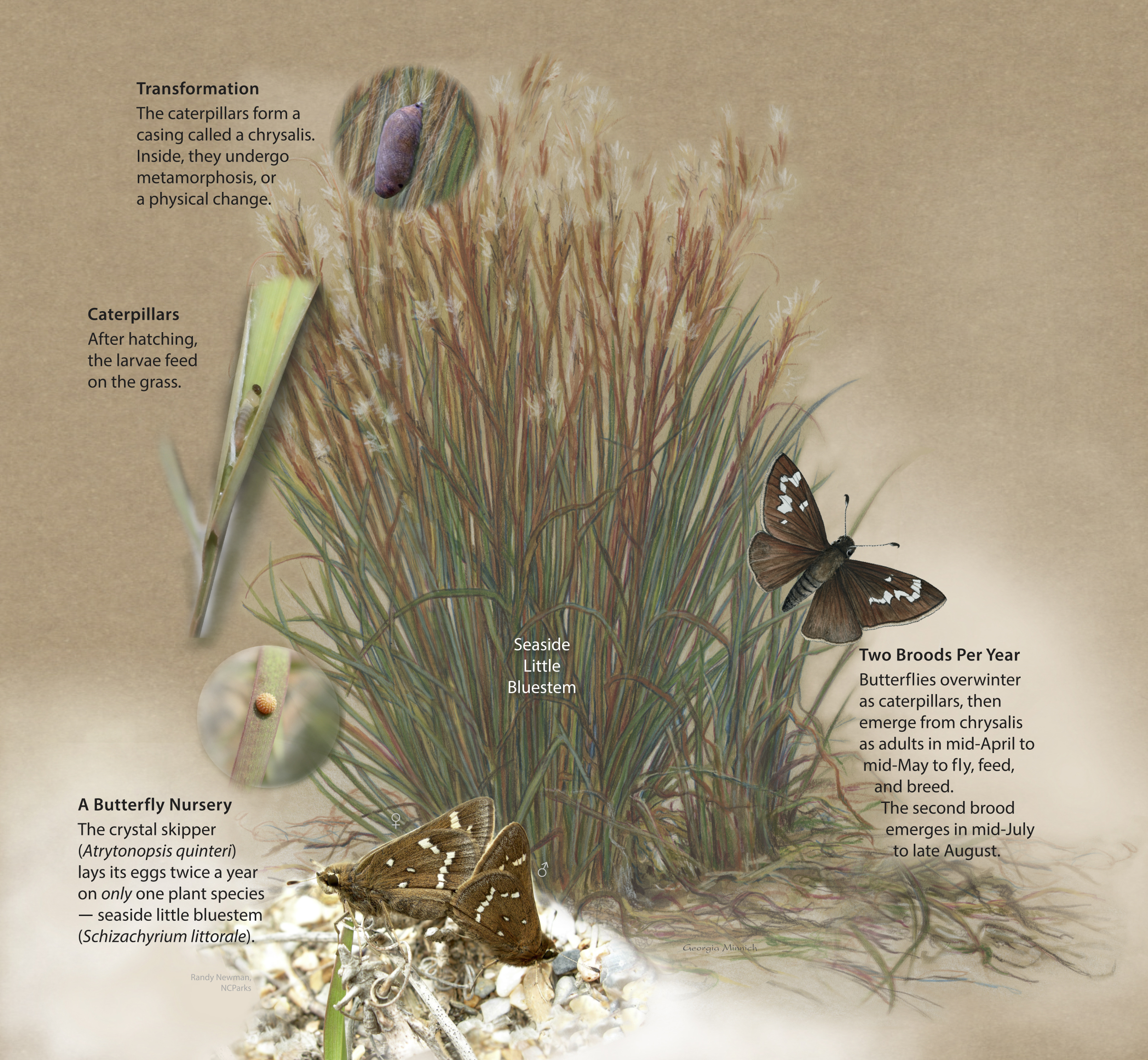 In contrast, the quality of the intervening habitat has deteriorated or disappeared, primarily from development, though other big threats include beach nourishment, insecticides, invasive species, major storms and storm surge, and climate change.

But crystal skippers have proven to be remarkably adaptive to their changing environment. Indeed, Leidner found that the butterflies exploit patches of suitable habitat amid development, in effect hopscotching over human-disturbed areas.

Ultimately, her findings suggested that “natural features, like ocean and maritime forests, were probably greater barriers to butterfly movement than development,” Leidner says. She cautions, however, that unabated urbanization could change the stakes.

“From my research, we really saw that habitat connectivity is important. But probably what’s even more important is just the amount of land available to the butterfly.”

On Bogue Banks, “development is extensive and progressing,” Haddad writes in his book. “The only way to increase the butterfly’s global population here is to engage people in low-cost conservation and restoration, especially on the dunes in front of their beach houses.”

That approach resonates with Sea Grant’s Putnam and the N.C. Aquariums’ Price, who have been leading a project to revegetate sites along Bogue Banks with seaside little bluestem and nectar plants as part of the Coastal Landscapes Initiative.

Four locations were chosen in part based on vegetation surveys done several years ago by NC State student Ian Grace. The new planting builds on dune enhancement efforts completed just before Hurricane Florence relentlessly drenched the state in September 2018. “We saw that there was a loss of plant material following Hurricane Florence,” Price says.

For expertise, Putnam turned to the North Carolina Botanical Garden at the University of North Carolina at Chapel Hill. Known for its native plant conservation efforts, the garden oversaw an effort to gather seeds from seaside little bluestem and nectar plants growing at Fort Macon State Park. Then garden staff propagated the seeds into plugs for planting.

Gathering seeds from known crystal skipper habitat was key, says N.C. Botanical Garden conservation ecologist Mike Kunz. “We want to use local plants because they are adapted to, and have coevolved with, the local ecosystem and all of its parts,” he says.

For instance, the bloom time of a nectar plant collected far outside of the skipper’s range might not jibe with the butterfly’s natural cycles. Given that adult skippers only appear twice a year — one brood emerges from April to mid-May, and a second from mid-July to late August — synchrony is essential.

Genetic diversity is, too. “We don’t want to just go collect a whole bunch of seeds from a couple of seaside little bluestem plants right on the side of the parking lot,” Kunz says. “We want to make sure we cover a whole range of ‘micro habitats,’ right? So, tops of the dunes, down the sides, in the lower areas.” 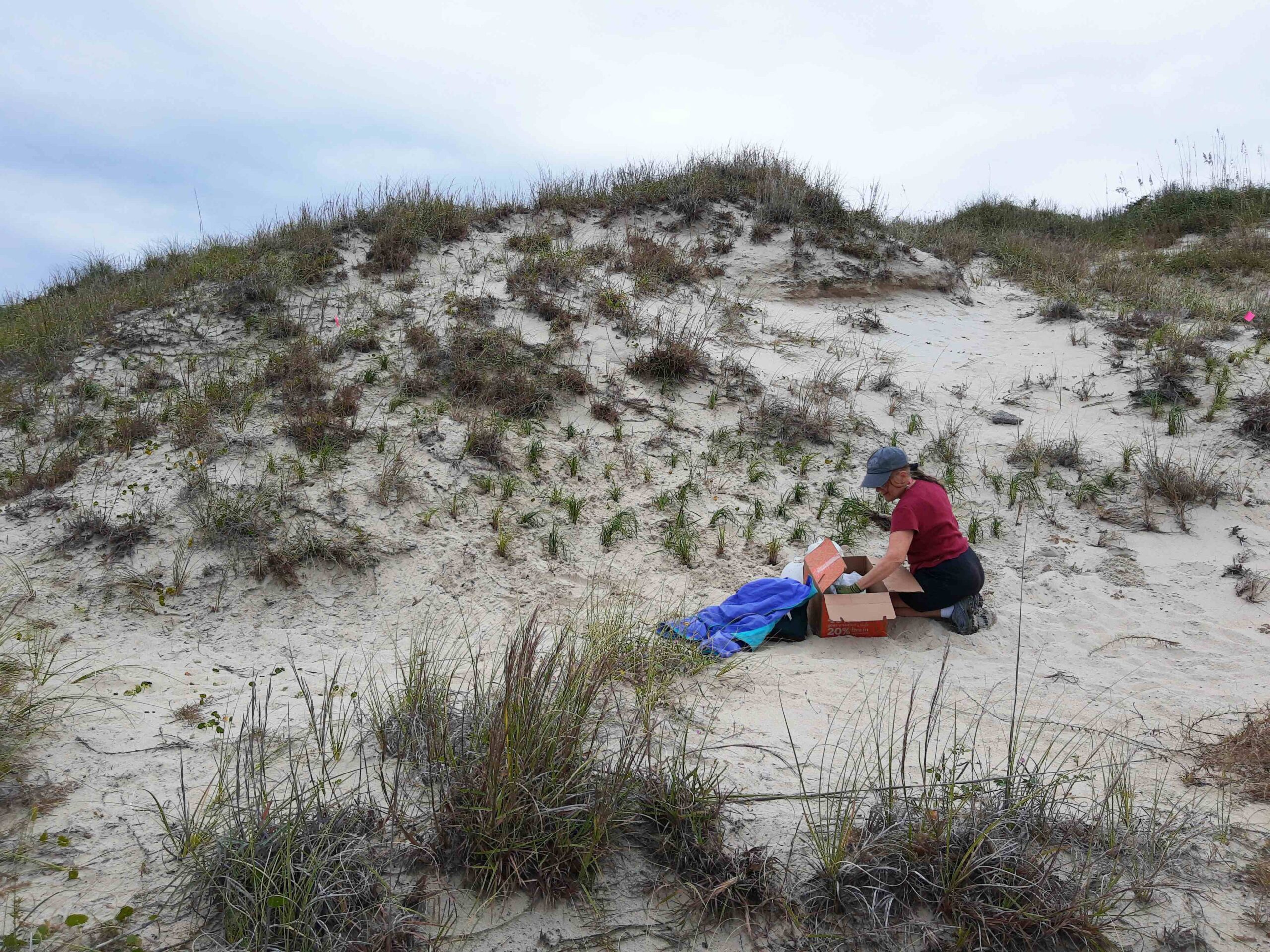 All told, the team installed 1,500 seaside little bluestem and 500 nectar plants over two planting sessions, which took place in October 2020 and this past March. “The cooperation and collaboration on this have been a lot of fun to be involved with and really cool to see,” Kunz says.

For her part, Leidner, who now works in the National Aeronautics and Space Administration’s Earth Science Division, is pleased to hear about the efforts. “When we look at conservation, we need to look holistically,” she says. Revegetating crystal skipper habitat supports a host of other organisms within that ecosystem — including humans who benefit from the storm buffer that healthy dunes provide.

“I think we have a responsibility to protect and steward these areas,” Leidner adds. “This is a butterfly’s home; this is also your home.” 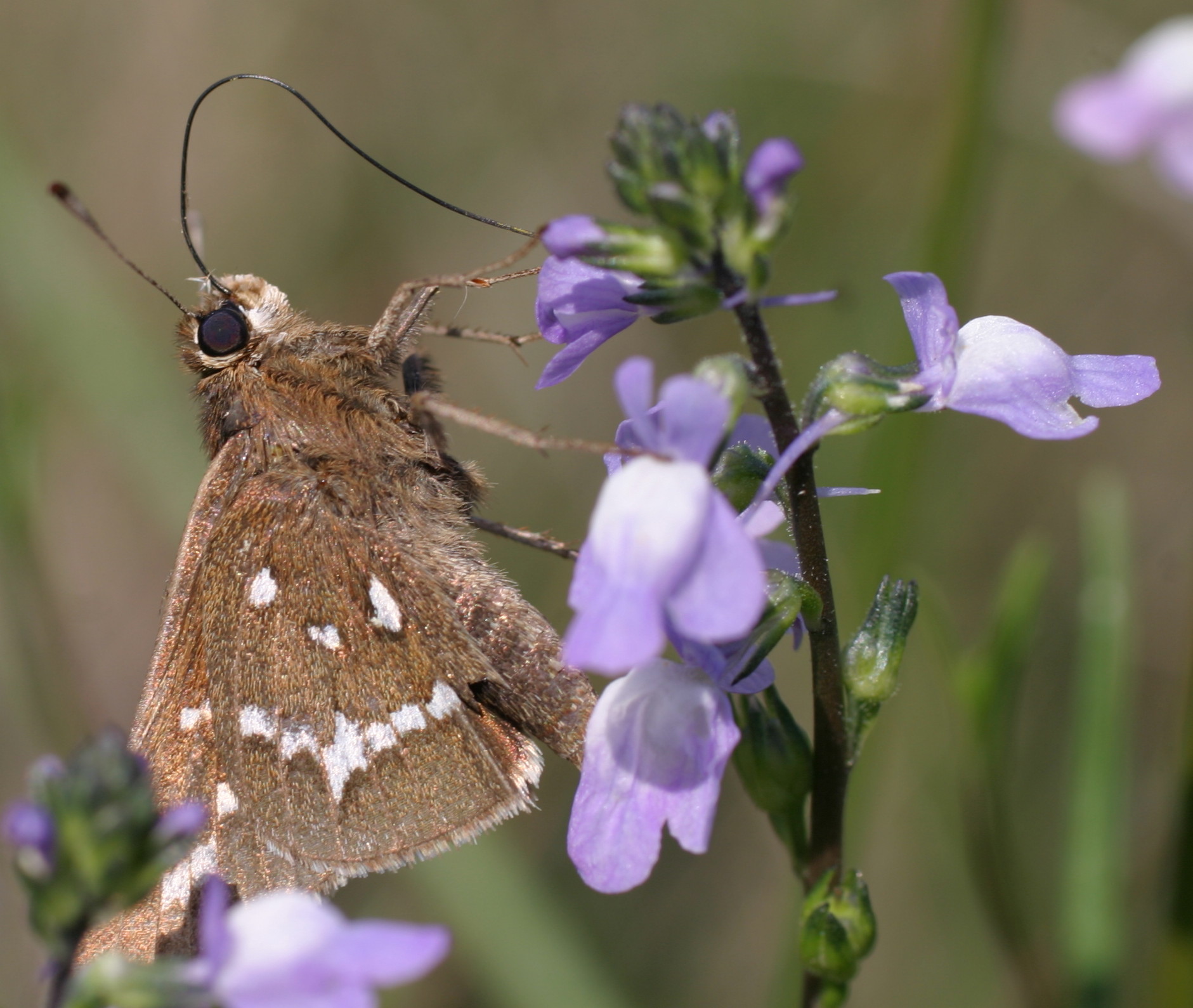 A crystal skipper on common toadflax. Photo by Sam Bland.

Now that she’s aware of the crystal skipper, Virginia Williams keeps an eye out for the lively specks. “I’m very excited to have them in the backyard,” she says. “If I knew where to get seaside little bluestem, I’d plant some more.”

The grass is hard to find in retail outlets, but Putnam is making inroads. She recently connected the N.C. Botanical Garden with master gardener Karen Mulcahy, who operates a native plant nursery called Above the Briery from her home north of Kinston. “Trying to enhance and restore environments is really appealing to me,” Mulcahy says.

The garden shipped her a package containing seaside little bluestem and various nectar plant seeds, along with propagation instructions. If her experiment goes well, Mulcahy plans to sell her native beauties at coastal farmers markets.

For the crystal skipper team, conservation doesn’t stop with planting. Since May, Price has been overseeing two NC State students as they conduct butterfly and vegetation surveys funded by the U.S. Fish and Wildlife Service. The purpose is twofold: to gauge crystal skipper abundance, and to get a better picture of which nectar plants adult butterflies use. Price hopes the experience will inspire more environmental stewardship. “I think there’s value in using this as a way to teach the young conservationists of the future,” she says. “This is what it takes, this is what it looks like, when you’re trying to save a species.”

The Coastal Landscapes Initiative is a multi-partner effort to address landscaping at every stage of the process, from planning and design to installation and management. The group has published a variety of digital and print resources, including a handy native plant guide, an interactive map of model gardens, and design templates for home gardeners and landscapers alike. Find them all at go.ncsu.edu/CoastalLandscapes.