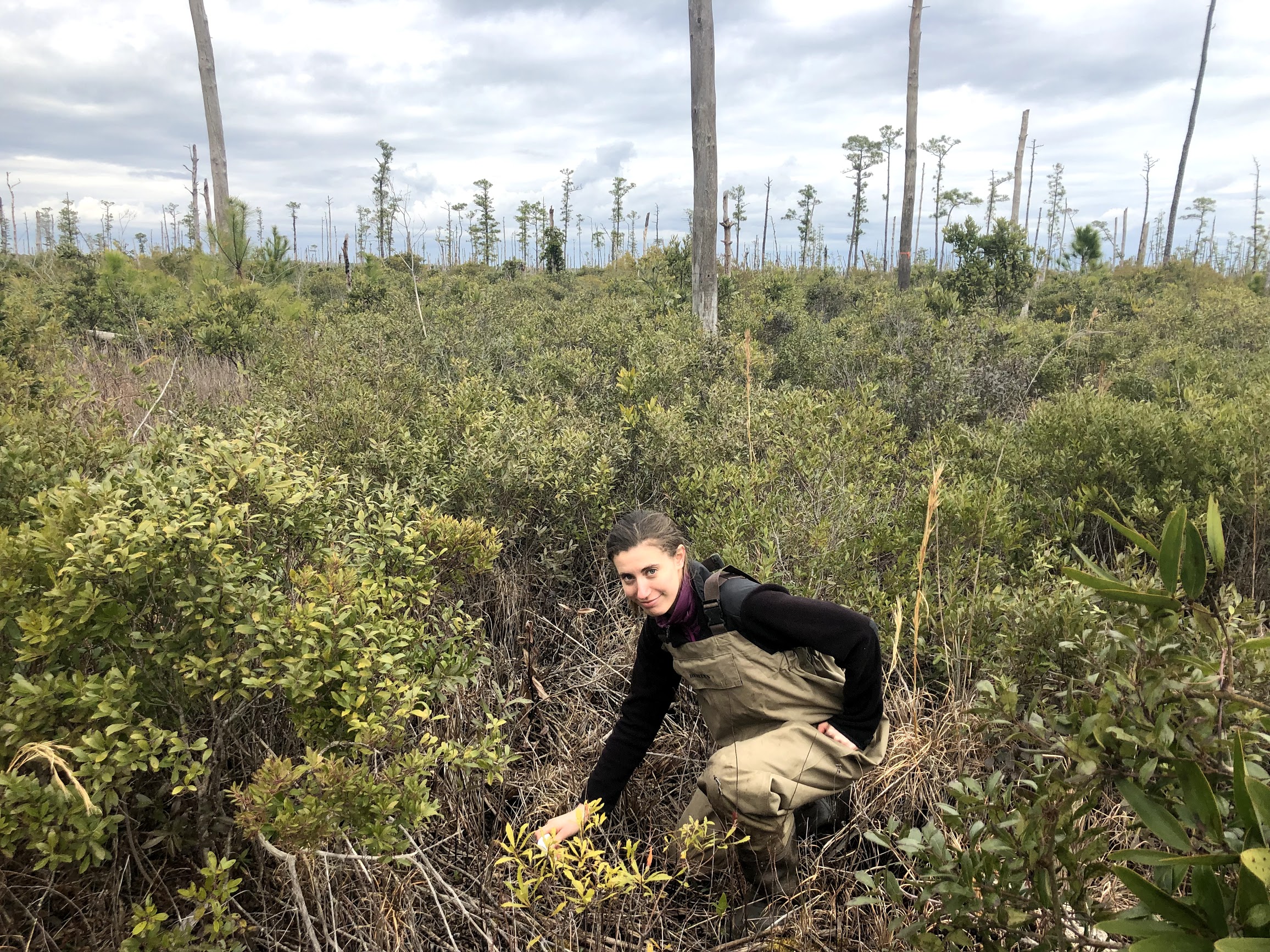 Emily Ury focuses on vegetation change to understand patterns of sea level rise. This photo and the lead photo are courtesy of Emily Ury.

“When you’re driving to the coast or the Outer Banks, you’ll see dead trunks and stumps that have no branches and leaves,” says Emily Ury, a Ph.D. student at Duke University. “When you’re seeing not one but hundreds of dead trees, it’s alarming. It raises the question, ‘What happened here?’”

North Carolina’s coastal region is home to many healthy, thriving, forested wetlands. In the past, only the occasional severe weather event could threaten these ecosystems with saltwater pushed inland. In more recent years, however, the soil in many of these wetlands is becoming saltier, killing plants and leaving stands of skeletal trees. Eventually these forests turn over into brackish marshland, driving out the plant and animal species that had called them home.

“There is this unique system of forested wetlands close to the coast,” Ury explains, “but in some areas, we’re seeing that ecosystem turning over in fewer than 10 years. That’s jarring.” 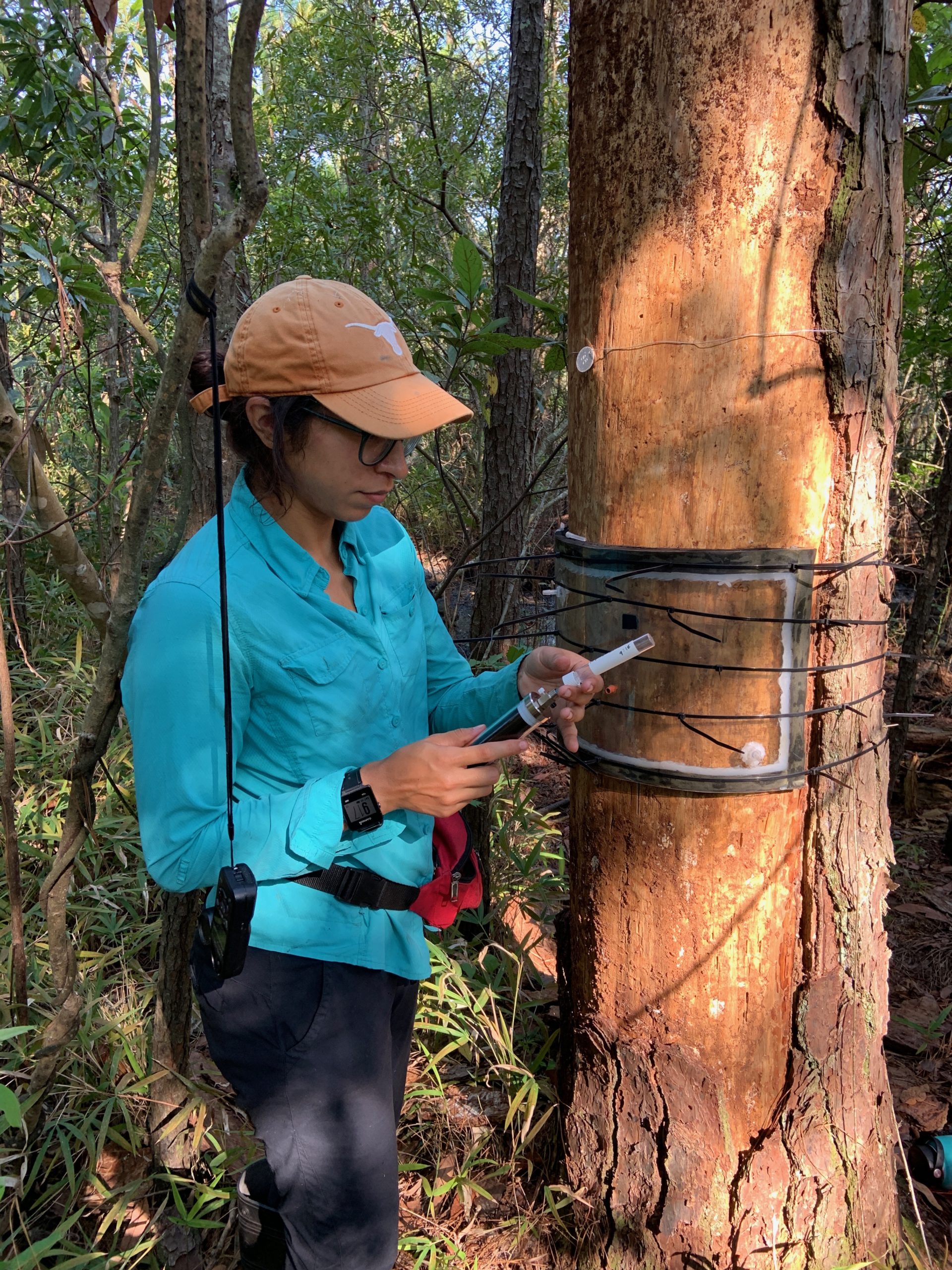 The resulting marsh eventually will become a sanctuary for myriad other plant and animal species. However, less is known about what happens during the transition, this ghost forest phase, or about the long-term impacts of wetland turnover.

Ury and NC State University’s Melinda Martinez, also a Ph.D. student, are North Carolina Sea Grant-Space Grant graduate fellows who are looking at how and why wetlands are turning into ghost forests. To do so, Ury and Martinez — along with their advisors, lab mates and a small but growing cadre of other labs and researchers — are using remote sensing data from several sources, including NASA, which funds Space Grant. Ultimately, they hope to understand how ecosystem turnover impacts the coastal region of North Carolina and beyond.

“These fellows are making important contributions,” says John Fear, deputy director of North Carolina Sea Grant. “Sea level rise and saltwater intrusion are important drivers of change in our coastal zone. Both of these studies will help us better understand how large areas of our coastal plain may transition due to these increasing threats.”

Eyes in the Sky

Martinez and Ury are utilizing an enormous compilation of over 30 years of photos and data collected through the Landsat Program, a network of Earth-observing satellites jointly administered by NASA and the U.S. Geological Survey. This remote sensing information is helping the two researchers scale up their findings to make inferences about entire regions.

Remote sensing technologies look at Earth from near or far and include radiometers, spectroradiometers, satellite sensors, LiDAR (Light Detection and Ranging), aerial imagery and other data collected from airplanes or various types of drones, such as unmanned aerial vehicles or unpiloted submersibles.

Jobi Cook, associate director at NC Space Grant, says that using “eyes in the sky” is integral for coastal research.

“Through programs like Landsat and other remote sensing data collection efforts, we have access to a treasure trove of information about every corner of our planet and can track trends and changes over time,” Cook explains. “North Carolina has a big chunk of coastal plain that’s essential for the environment and the economy of the state, so it makes great sense to use the datasets available through NASA and others to help researchers study the health of our coast.”

The View From Space

Emily Ury is not a native of the Alligator River basin in eastern North Carolina, where she conducts her research, so she has not watched these ghost forests form over the years with her own eyes. She is, instead, relying on decades of satellite data and images to show her the progression of the forests, snapshot by snapshot, a story of 35 years of change on the Alligator River. 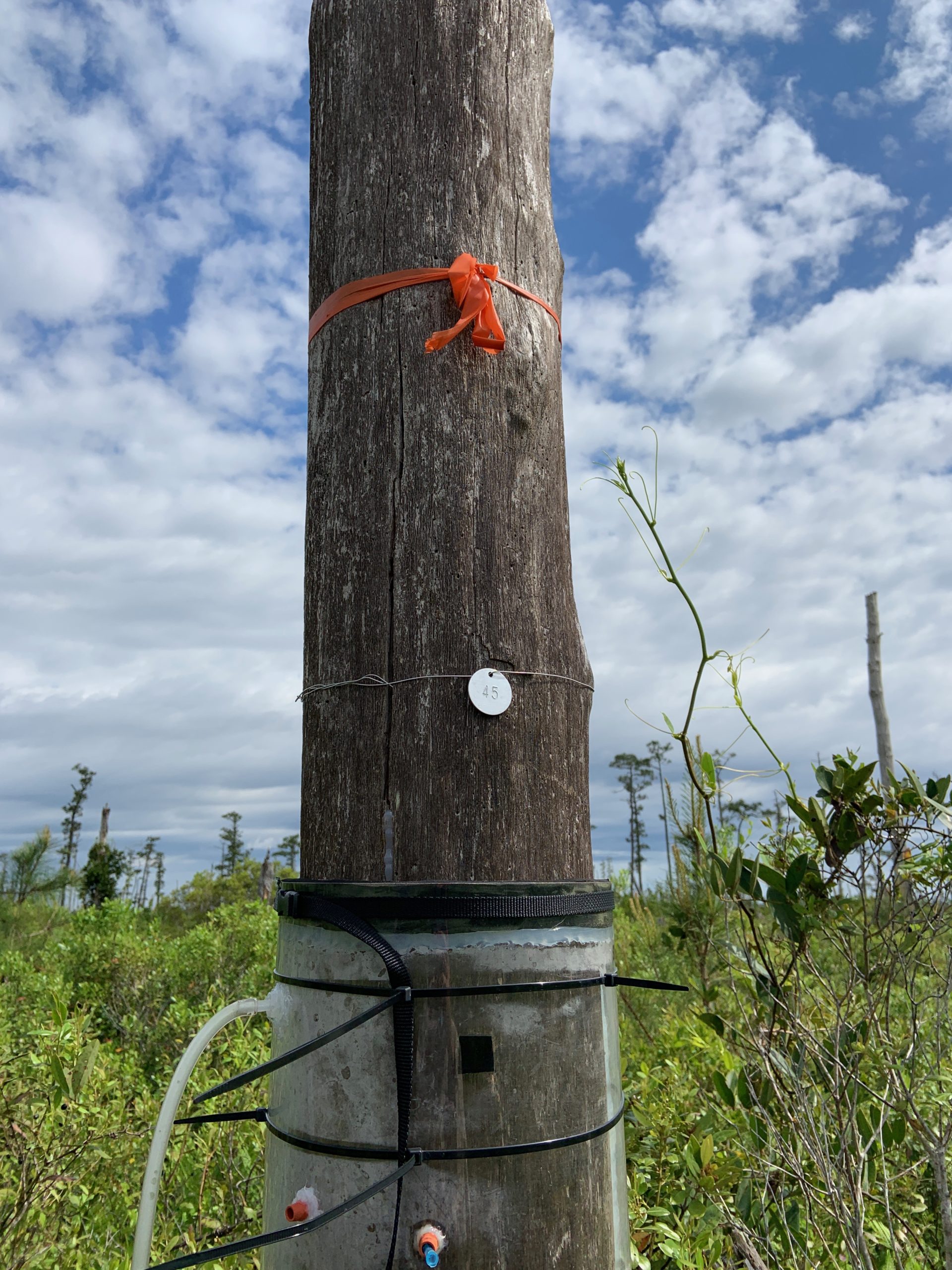 “The end result will be a case study of how to use remote sensing to observe the effects of sea level rise,” Ury says.

Ury has a background in biogeochemistry, looking at how chemicals, such as carbon, nutrients, and salt, move through the environment. As an undergraduate at Williams College in Massachusetts, she was interested in environmental contaminants in river ecosystems. For her master’s degree at Yale School of Forestry and Environmental Studies, she studied nutrient cycling in rivers heavily polluted from intensive agriculture in the Mississippi River Basin.

For her Ph.D. work, Ury was planning to study how salinity affects the capture or release of nutrients and carbon in soil, but she found herself drawn to figuring out where this phenomenon was even happening. Now, she uses vegetation change to understand spatial patterns of sea level rise and saltwater intrusion.

In doing so, Ury has dug deeply into the NASA/USGS Landsat Program’s satellite data to answer key questions: Why did this patch of trees die and not another one? Can we predict what’s next? Is saltwater intrusion caused by sea-level rise, inundation stress from flooding events, or is it from acute events, such as hurricanes? 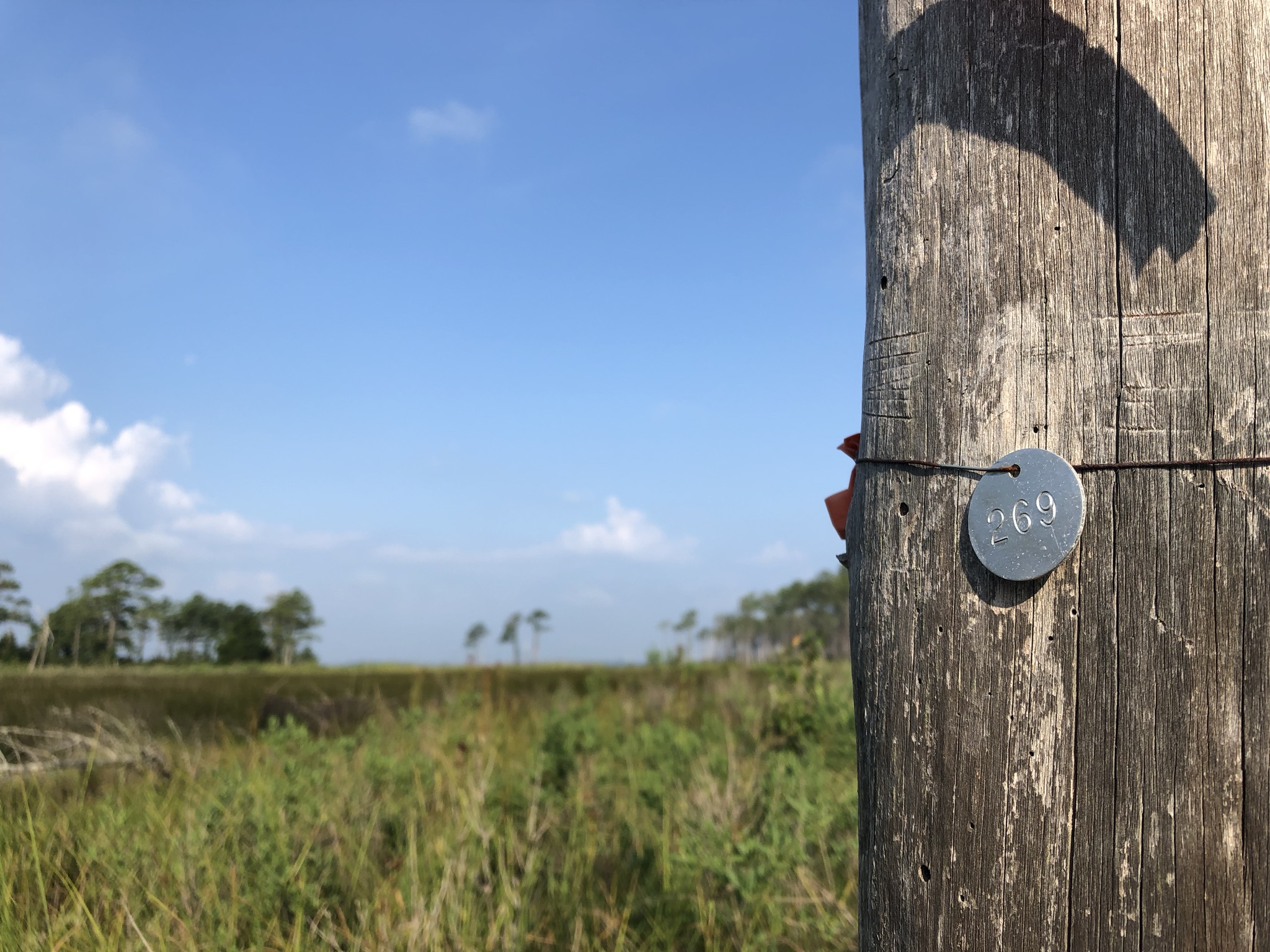 She says ghost forests appear at the places most vulnerable to saltwater intrusion, and they highlight the risks posed to all coastal forested wetlands.

“Now,” Ury explains, “we can create a time series to show the slow but steady decline of forests as they continue to convert to marshes. Every year, a little bit more of the forest is lost, with the occasional disaster year that catalyzes large declines in forested wetlands.”

Ury sees the potential for further research projects to take the current work to the next level through field experiments — experimental manipulation of wetlands to prevent or restore damage from saltwater intrusion events.

Eventually, she hopes to use her data to help predict how long it takes for forested wetlands to turn into ghost forests and then into marshes, as well as to determine under what conditions they may be able to change back.

“Some areas do recover,” she says. “But it’s not the overall trend.”

“I’ve been studying wetlands for so long, I’ve really started to appreciate this field,” says Melinda Martinez. But forested wetlands haven’t always been on her radar. 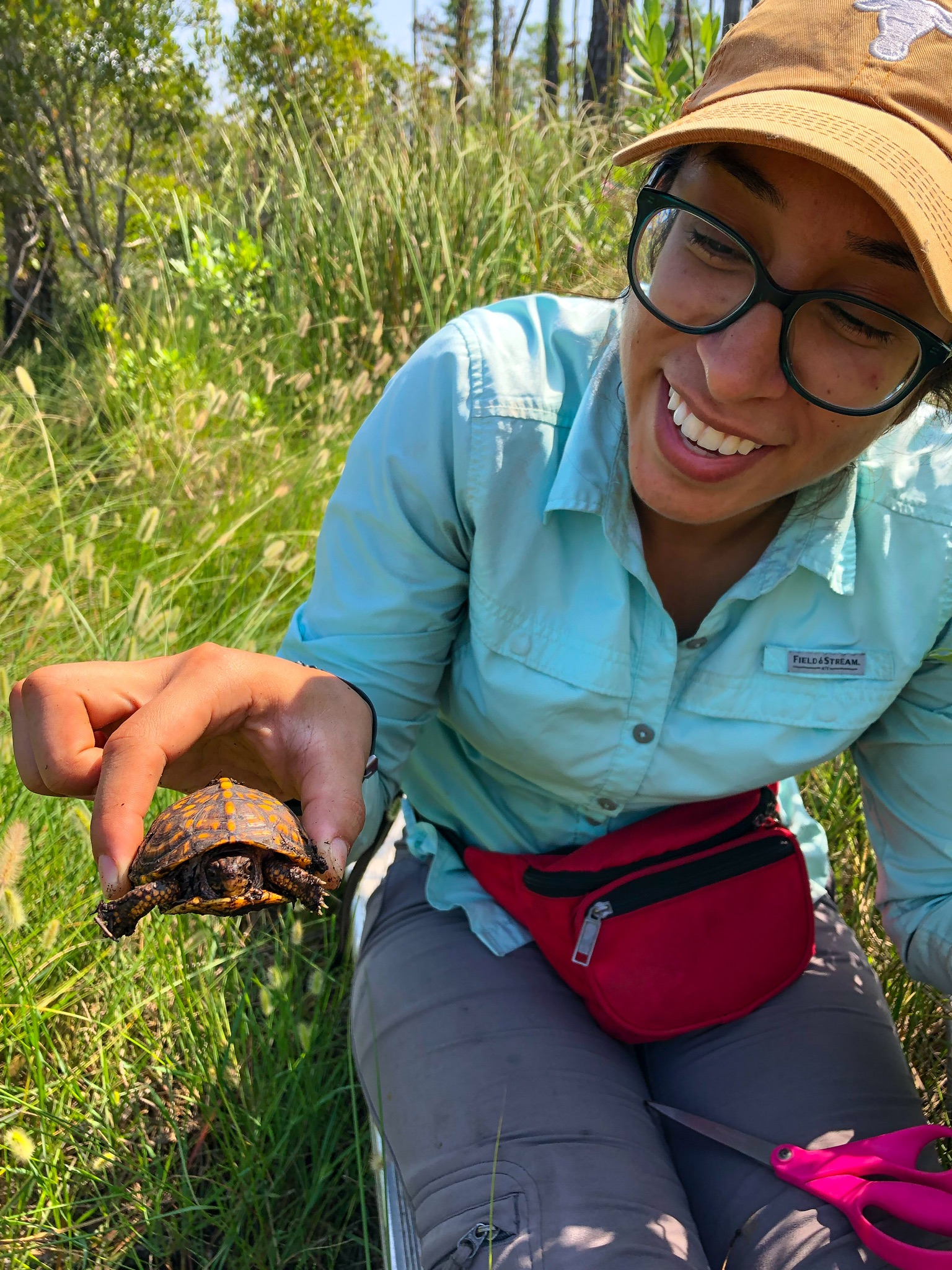 Martinez rescued a turtle who found one of the soil chambers that she uses to measure greenhouse gases in the ground. Courtesy of Melinda Martinez.

Growing up in Dallas, she was environmentally conscious and had a passion for the coast, but admits she had limited exposure to wetlands. That changed when, as an undergraduate at the University of Texas at Austin, she took an opportunity to study seagrass ecology in the Yucatán Peninsula.

That experience was her introduction to research into coastal issues. Later, she studied Texas’ barrier islands while at the Texas A&M University-Corpus Christi for her first master’s degree, leading her deeper into the coastal and wetland ecology field. She sought a second master’s at Northeastern University before studying in the Ph.D. program at NC State.

According to Martinez, there are only a handful of other researchers and labs studying ghost forests, which was a draw for her. There’s plenty of room for new discoveries — and from many different angles.

These researchers at the cutting-edge include Emily Bernhardt and Justin Wright, Ury’s advisors at Duke, as well as Marcelo Ardón, Martinez’s advisor at NC State, and Ryan Emanuel, also at NC State. All participate in a large research project the National Science Foundation supports on saltwater intrusion and are deep into their research at a time when ghost forests are gaining national attention.

Martinez also uses the NASA/USGS Landsat Program’s satellite photo compilation to detect the progression of ghost forests, as Ury does, but she zooms in to view ghost forests on a granular level: tree by tree. While Ury is trying to understand how, where, and why ghost forests form, Martinez combines remote sensing data and ground-level observations to uncover the impacts ghost forests make on the larger environment here and now.

Martinez spent the past summer not only sifting through satellite data, but also going into the field, attaching gas chambers to trees and measuring the outputs of carbon dioxide, methane and, the most potent, nitrous oxide.

Her data set already suggests a few trends. For instance, she sees evidence of much higher greenhouse gas emissions inside stands of dead trees compared to the levels expected in a normal forested wetland. Now, she hopes to tease out why.

“Wetland plants act as straws and naturally suck greenhouse gases from soil and emit them into the air,” Martinez says. She emphasizes that photosynthesis, the process of plants converting carbon dioxide into oxygen, is not the only gas exchange involved.

Anaerobic bacteria living in the soil of wetlands, ghost forests, and marshes are the originators of those gases in the soil, she explains, and they produce methane as a part of their life cycle, which the trees and plants then absorb and emit. When the trees die, however, they remain standing and continue to emit soil-produced gases. The decaying wood itself can also emit methane, carbon dioxide, and nitrous oxide, complicating Martinez’s efforts to measure them.

Martinez says she hopes she can begin to parse out the quantities from each source and find the fluctuations in methane and nitrous oxide emitted by landforms as they change. Someday, these measurements will help her and other researchers better calculate the quantity of greenhouse gases the landscape emits naturally.

“The next step,” she says, “will be to create a regional greenhouse gas emissions estimate.” In this way, her data will add a new tool to wetland managers’ toolkits, helping to inform decisions by accounting for the amount of various greenhouse gases the terrain is absorbing or emitting.

The information Ury and Martinez are compiling from their time as North Carolina Sea Grant-Space Grant graduate research fellows is certain to impact a field ripe for new discoveries. Ultimately, they may also help people the world over become more aware of our impacts on ecosystems — and provide important guidance for wetland managers and conservationists about the lands under their care.

Watch a Science Friday video about the research labs that Ury and Martinez work with: go.ncsu.edu/Ghost-tv.

from the Winter 2019 issue of Coastwatch