Life on a ‘Finger Between Two Bays’

Jimmy Morris (right) began clam farming in the early 1980s and built a thriving, highly adaptable family business. Today, growers and universities alike in our state have learned to rely on his expertise.

Resilience is a way of life for Jimmy Morris, founder of Morris Family Shellfish Farms and the Mill Point Hatchery in the small village of Sea Level, located in Carteret County’s Down East communities.

Often described as the dean of North Carolina shellfish mariculture, Morris began clam farming in the early 1980s. Phillip “Skip” Kemp, then a member of the North Carolina Sea Grant extension team, introduced Morris to the idea of growing shellfish. 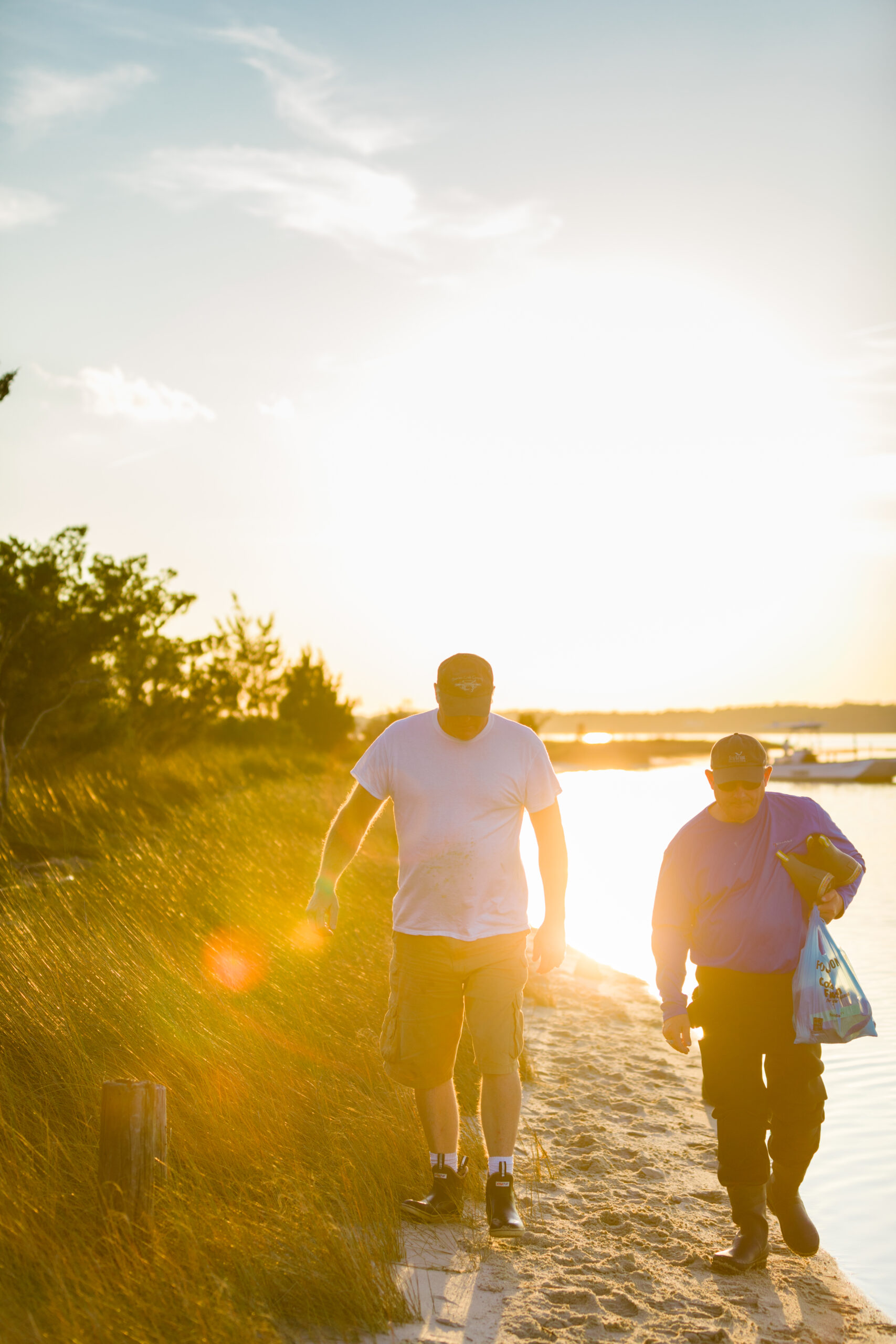 Morris has a scientific streak that builds on his natural curiosity and observations from years of working waters and land. Those combined skills prompted him to start the state’s first and still longest-serving shellfish hatchery, initially set up in a fish house he estimates was built in the 1920s.

Morris remains a grower, and a key partner in Sea Grant’s shellfish aquaculture research and outreach. Eric Herbst, who joined Sea Grant this summer as the coastal aquaculture specialist based in Morehead City, notes he connected with Morris early on.

“I was immediately impressed with his wealth of knowledge, not only of shellfish biology, but also gear and strategies, along with the business elements of mariculture,” Herbst says.

Back in the 1980s, Morris had made a slow but steady shift from being a fifth-generation commercial fisherman to becoming a full-time shellfish farmer, drawing upon his knowledge of working the waters of Core Sound, Styron Bay, and Nelson Bay.

He looked to mariculture as an opportunity to provide a balanced annual income by controlling the cycles of planting and harvesting. And as others saw his success, a small growers’ cooperative evolved.

“A lot of growers were fishermen in the same predicament that I was,” Morris recalls. “I helped a lot of them get started.” He still sells seed to some of those growers and their families, along with new oyster farms.

The first decade set a pace for the Morris operations.

But along the N.C. coast, the best-laid plans must be adapted to prepare for and respond to coastal storms. 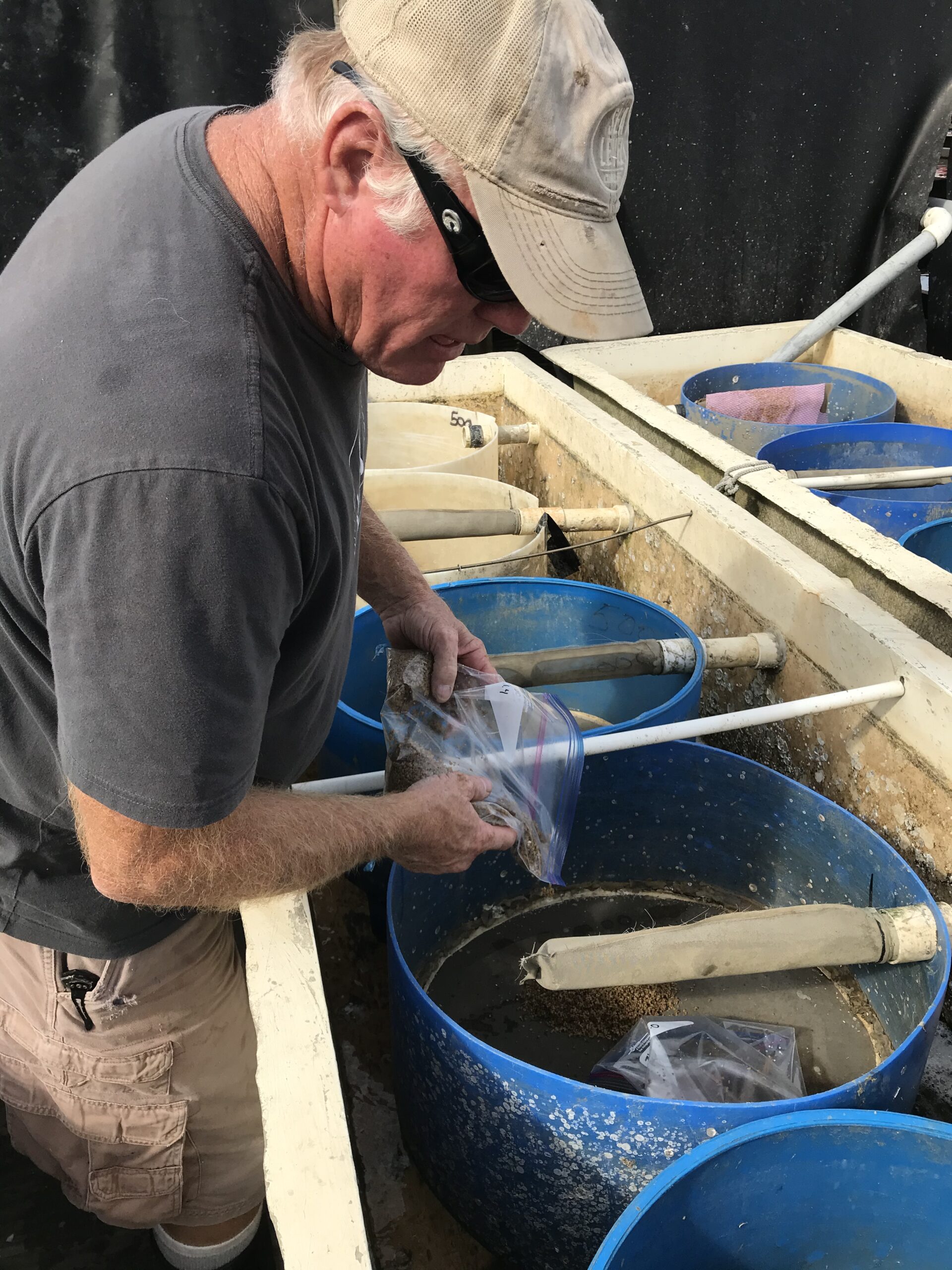 The Morris operation includes a hatchery and nursery for oysters and clams. Credit: Eric Herbst

In 2003, Hurricane Isabel destroyed the Morris family home, along with the original hatchery, nursery, and grow-out operations, totaling about 8 million clams. Learning from that storm, and recognizing that his land is “a finger between two bays,” Morris built a much stronger hatchery on higher pilings.

Getting the hatchery running allowed him to grow oysters to a stage known as eyed larvae, which the state needed for reef restoration and creating new oyster sanctuaries. “I earned money to continue rebuilding,” he recalls.

The Morris family also adapted how the farms were planted, choosing water-based gear that was better fortified to withstand hurricanes’ wave energy.

But in 2018, the farm again suffered significant damage as Hurricane Florence hit the docks, water tanks, and building, taking all his seed. The storm even moved a cast-iron pump off a pier that was already six feet off the water. “Hurricane Florence was 130 mph at Cape Lookout,” he recalls, “But Ocracoke didn’t get anything.”

Morris worked through 2019 and into 2020 in recovery mode, which included locating cages that had been carried into the woods. “I lost 1,000 and got about 800 back. The others must have gone out into the ocean,” he speculates.

But post-Florence water flow from inlets, along with favorable winds, also seemed to change the water chemistry during 2019. That was fine for his site, he says, as the higher salinity “keeps the oysters salty and growing.” 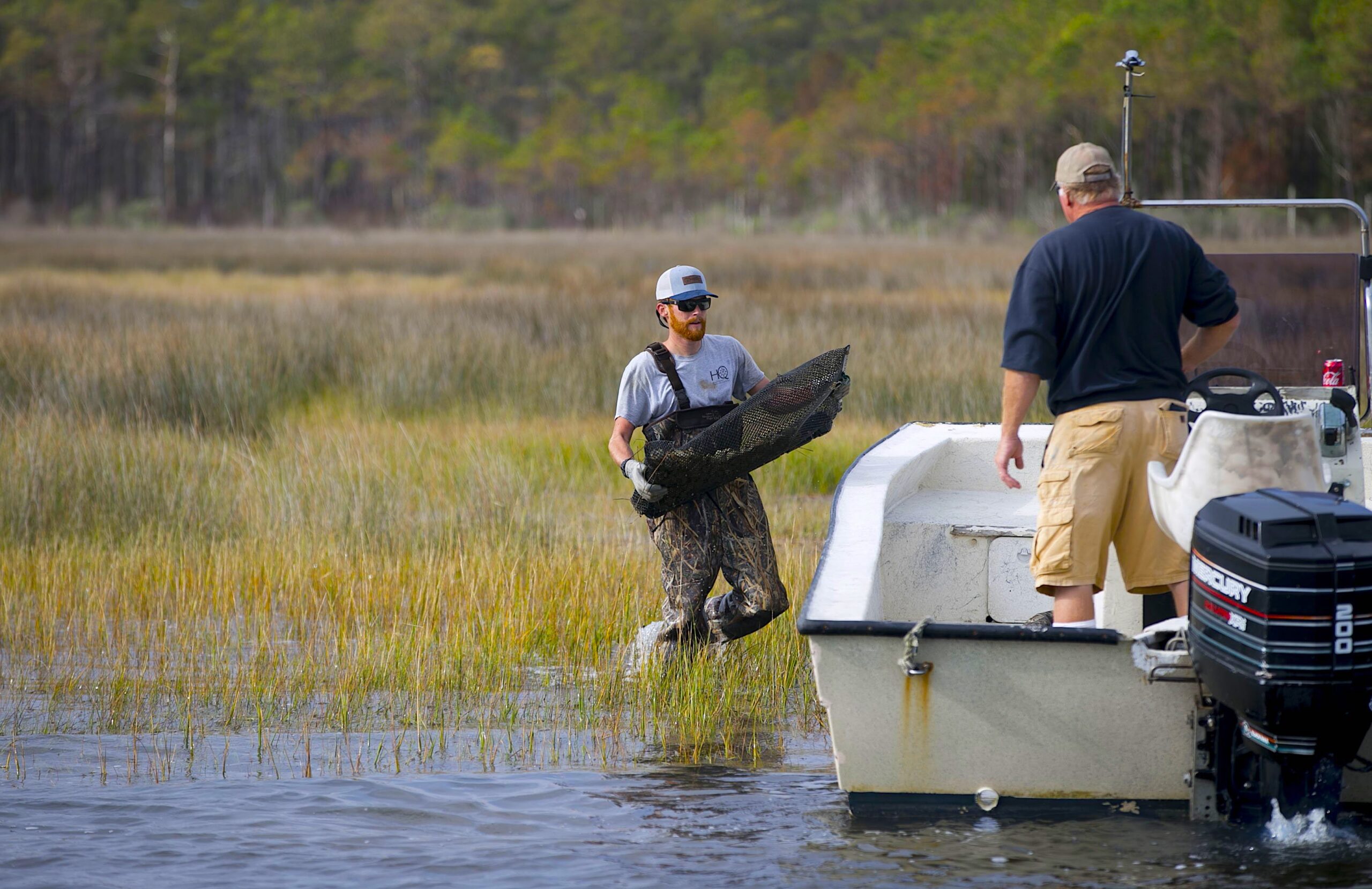 The Morris operation is often described as among the largest shore-based nursery systems on the East Coast. Through connections with hatcheries from Florida to Maine, he not only can help provide stability in seed supply for N.C. growers, but also gain information on innovations and new technology. 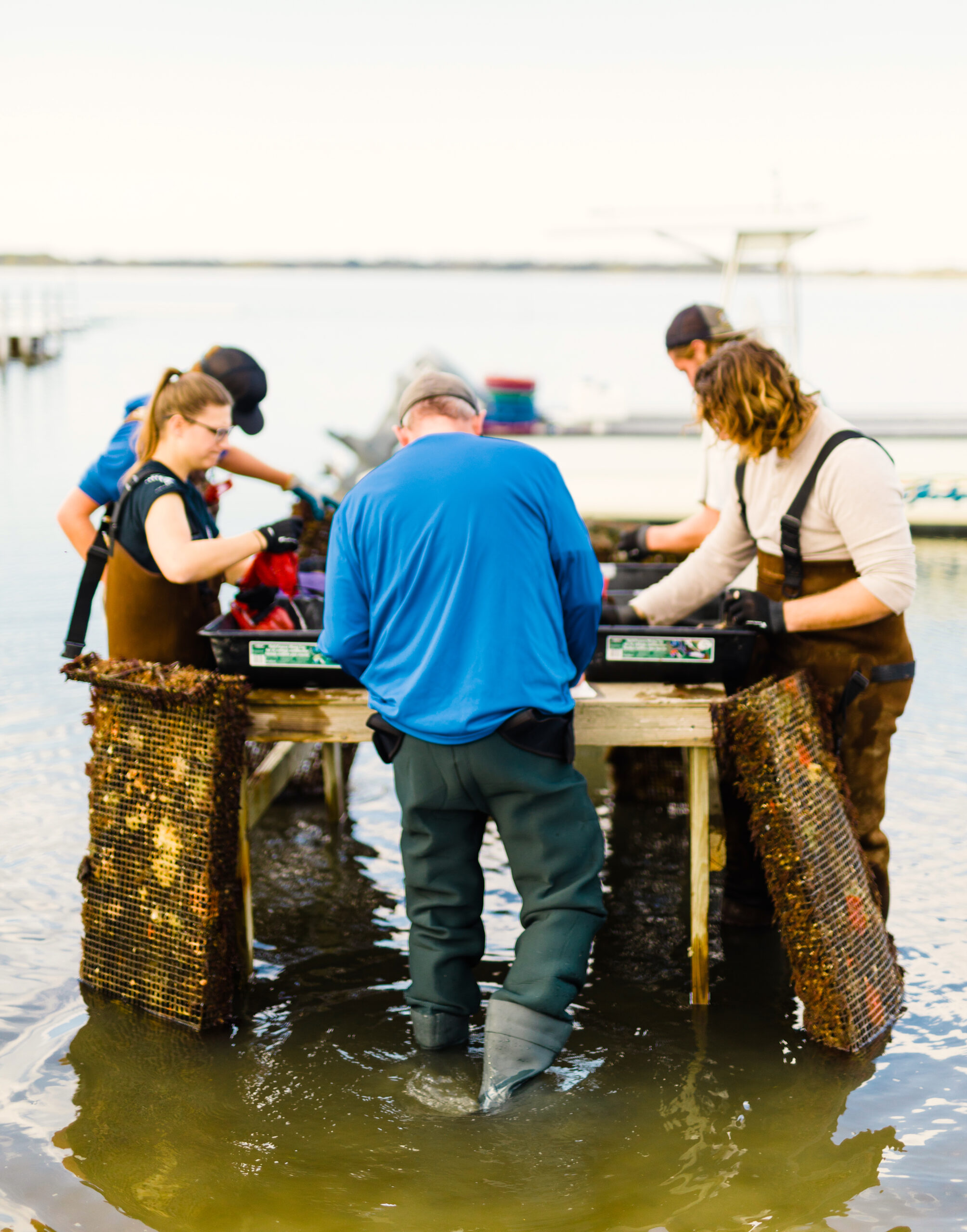 Students were among key members of a pre-pandemic Sea Grant research team that identified best methods and gear for oyster growout in various locations along the coast. Credit: Baxter Miller

Morris also has been a key partner with coalitions to restore reefs, producing more than 100 million oysters that were stocked in coastal oyster sanctuaries. He had the first contract to provide spat larvae for the state of North Carolina, which were set on shell to continue growing in designated estuarine waters. Restored reefs improve ecosystems, with some larvae even riding currents out of the formal sanctuary boundaries and boosting wild growth.

Today, three generations of the Morris family work in the aquaculture business. In busy times, they employ up to 10 workers from rural Down East communities. His nephew led tours for the N.C. Shellfish Farming Academy, which launched earlier this year.

Through the academy, North Carolina Sea Grant and Carteret Community College are providing lessons for new growers, as well as folks who may want to start a business. Funded by a grant from the National Sea Grant College Program and the National Oceanic and Atmospheric Administration’s aquaculture program, the academy is so popular that a second session was quickly added this fall.

“We take classes out to see his operation to get an idea of the work involved managing things at that scale,” explains Bryan Snyder, a mariculture associate with North Carolina Sea Grant. A few years back, Snyder was a student at CCC, and Morris was among his mentors for a research project.

Morris knows that results of demonstration projects are shared with competitors, but he sees the value in supporting the broader community.

Scientists from NC State University, the University of North Carolina at Chapel Hill, UNC Wilmington, and other universities, along with their graduate students, often seek out Morris as a collaborator. Those projects are not just on aquaculture topics. They include studies ranging from how soundscapes affect oyster larvae recruitment to the development of seagrass restoration approaches using clams, as well as studies of shellfish bacteria and their effects on humans and ecosystems. 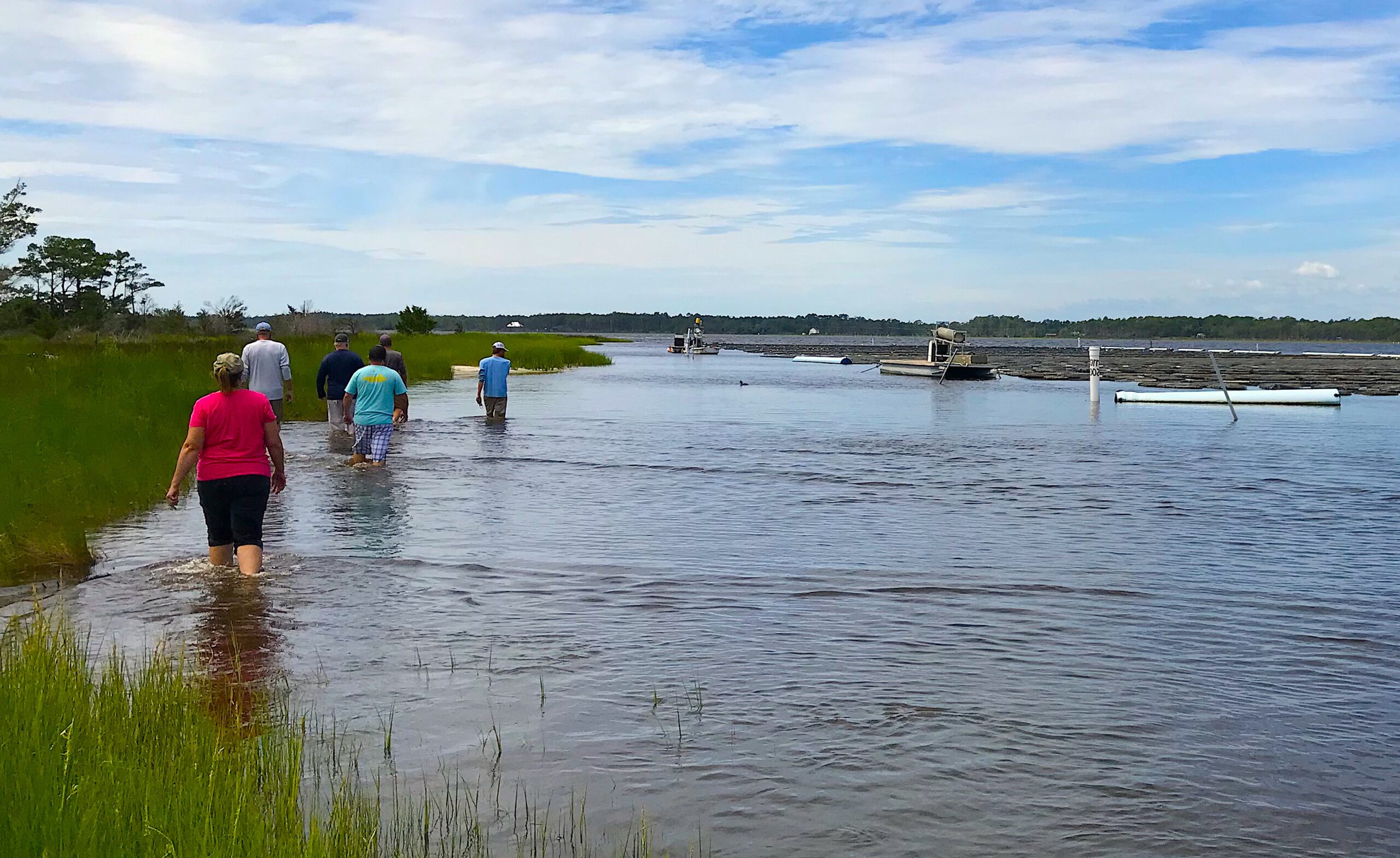 The new N.C. Shellfish Farming Academy (above) has included field trips to the Morris Family Shellfish Farms and the Mill Point Hatchery in the Sea Level community. Credit: Eric Herbst

“I am impressed with the long-standing relationship he has with North Carolina Sea Grant, serving as an industry partner or collaborator in multiple applied-research projects over the years,” Herbst notes.

A current initiative looks to diversify the shellfish species grown in the state. Dave Cerino of CCC leads a team looking at potential for crops of sunray venus clams, and the research team includes Ami Wilbur, who heads the shellfish hatchery at UNCW.

Morris has tested the clams and provides real-water perspective that identifies how survival and growth are based on changing salinity. Those changes can be especially strong when a storm may bring a flush of freshwater runoff downstream to some leases. 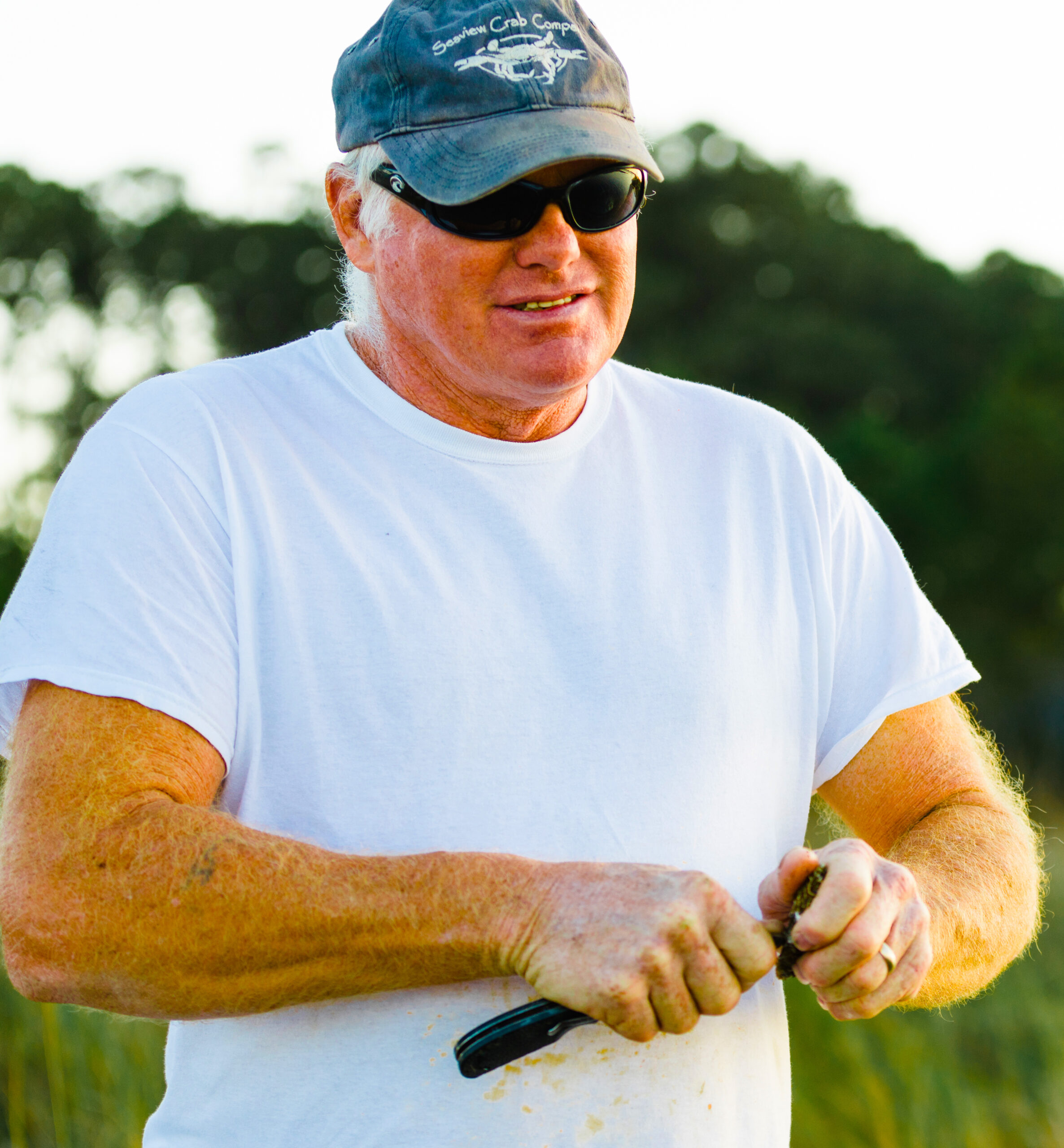 In recent years, Morris also has worked with Oyster South, a group that includes growers, researchers, gear businesses, restaurants, and others who support the industry. One project provided a digital microscope that he uses in research — and to demonstrate shellfish growth to visitors.

For example, high-resolution images reveal hard clams just two weeks old. “These clams are getting busy,” he explains. “They’ll be crawling before too long.”

The Morris farm was a demonstration site for a gear research project led by former Sea Grant aquaculture specialist Chuck Weirich, who praises the personal connections that Morris makes. “He may not be one to go to meetings, but he will take time to talk one-on-one,” says Weirich, who moved to the National Sea Grant Office in 2019.

And now, on any given day, you will find him on the phone, fielding questions about how to grow oysters and clams. Beginners to experienced growers stop to chat about challenges and expectations for new gear, weather forecasts, and much more.

When Ryan Bethea, owner of Oysters Carolina, was making his own shift to shellfish farming, he did an externship with Jimmy’s son James, who also grows shellfish. Bethea met and learned from Jimmy, too. “We couldn’t be here without them,” says Bethea, who continues to pay forward those connections in his own outreach efforts in the industry and beyond, such as participating in a Sea Grant video about mariculture careers.

In November, Morris hosted a field trip for the second session of the shellfish academy, answering questions and explaining gear and business choices.

And while a global pandemic has brought new challenges throughout the state’s shellfish supply chain this year, Jimmy Morris still sends shellfish to restaurants throughout the region and state, and has maintained a special connection to the Sea Level NC restaurant in Charlotte.

Down East customers also know to check the coolers at Lookout Grocery. Over the years, online orders have come from as far away as Florida and Texas.

As 2020 comes to a close, Jimmy Morris has no plans to retire. “This body is made to move,” he says with a chuckle.

information and resources about aquaculture