From Water to Air

When cyanobacteria go airborne, community scientists are helping to investigate. 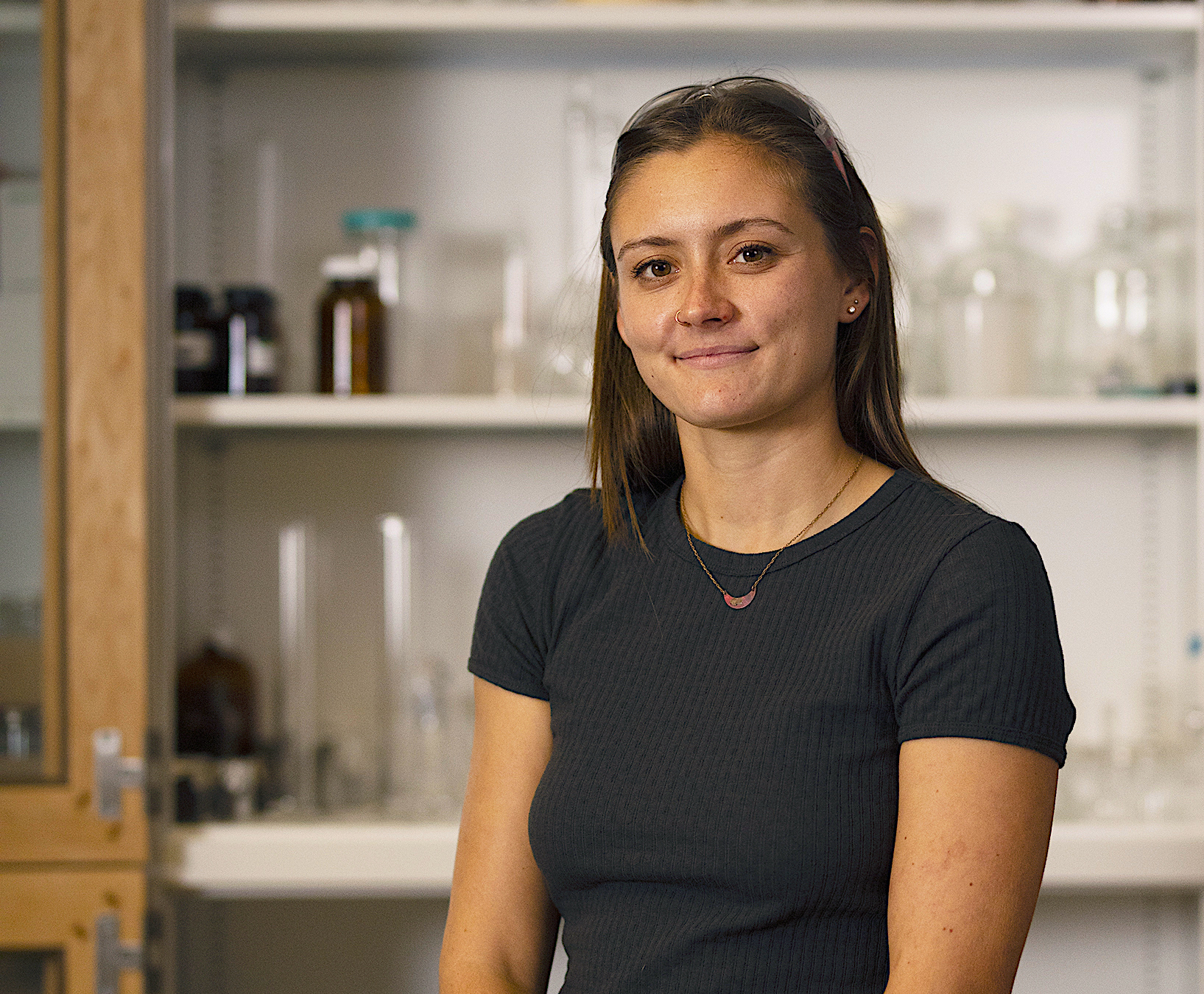 A PHOTO STORY BY MEGAN MAY

At the end of a gravel road, tucked deep into the woods, bald cypress trees dot the shoreline of Bennett’s Mill Pond. Great blue herons wade in the shallows, searching for their next meal. It’s July in North Carolina, and time on the water would be the perfect way to enjoy some peace and quiet. But not today.

Haley Plaas pulls on a pair of rubber gloves. She lays on the dock and gently reaches her hand in. A mucus-like substance clings to her glove as she pulls back, leaving stringy threads on the water’s surface. While brilliant in color, the network of blue scum across the pond is dangerous cyanobacteria, a type of harmful algae.

Sometimes confused with aquatic plants like duckweed, cyanobacteria can vary from looking like green or blue-green opaque, thin mats to translucent paint or dye. Blooms pose a threat to the local environment — leading to ﬁsh kills, ecosystem damage, and drinking water contamination. They can also cause illness in humans and death among pets and wildlife.

Harmful algal blooms (HABs) occur naturally, but human activities increase their frequency and intensity. HABs feed on nutrient runoff — anything from leaky septic tanks to fertilizers and industrial waste. While the U.S. South has dealt with this for years, it’s a growing global environmental issue exacerbated by climate change. Increased surface temperatures lead to warmer waters, and more extreme storms are followed by periods of drought. That combination is a perfect recipe for the algae — storms increase nutrient runoff into waterways, and then drought leads to stagnant, warm water.

Due to wind and wave action, HABs can move quickly through an ecosystem. An area can be healthy one instant and then contaminated in just a few hours. Cyanobacteria are the most common type of harmful algal bloom found in freshwater, but can occur in brackish or saltwater as well. Historically an issue in hot climates, harmful algal blooms are now found across the globe and in all 50 states.

While cyanobacteria directly impacts water quality, less is known about how it affects air quality. Enter Plaas, a PhD candidate in environmental science and engineering at UNC-Chapel Hill and a North Carolina Sea Grant advisory board member.

HABs emit cells and chemical compounds that travel as tiny atmospheric particles, called aerosols. Plaas has partnered with the Chowan Edenton Environmental Group (CEEG) to deploy PurpleAir air sensors along North Carolina’s Chowan River, part of the Albemarle-Pamlico estuarine system. Their goal is to see if blooms correlate with poor air quality due to an increase in these aerosols, and generate a wealth of accessible data in areas that are underreported.

CEEG educates the public about environmental issues and supports research efforts in the area.

“Water quality is a key issue here. It’s a big part of our livelihood,” says Colleen Karl, chair of the CEEG. “It affects the economy — just look at the number of people that commercially and recreationally ﬁsh. Farming is tied into it because they use the water for irrigation, among a number of other reasons. There’s also a lot of people that buy houses in the area because they want to be on the water. So it’s a concern for a lot of people.”

“By directly collaborating with community scientists, you’re connected to a network of people who are seeing these environmental issues every day,” she says. “It’s really important to put community members in the driver’s seat. I know this can’t be possible for all research, but for a lot of environmental and public health research it’s crucial to get feedback from the communities that you’re hoping to have an impact in.” 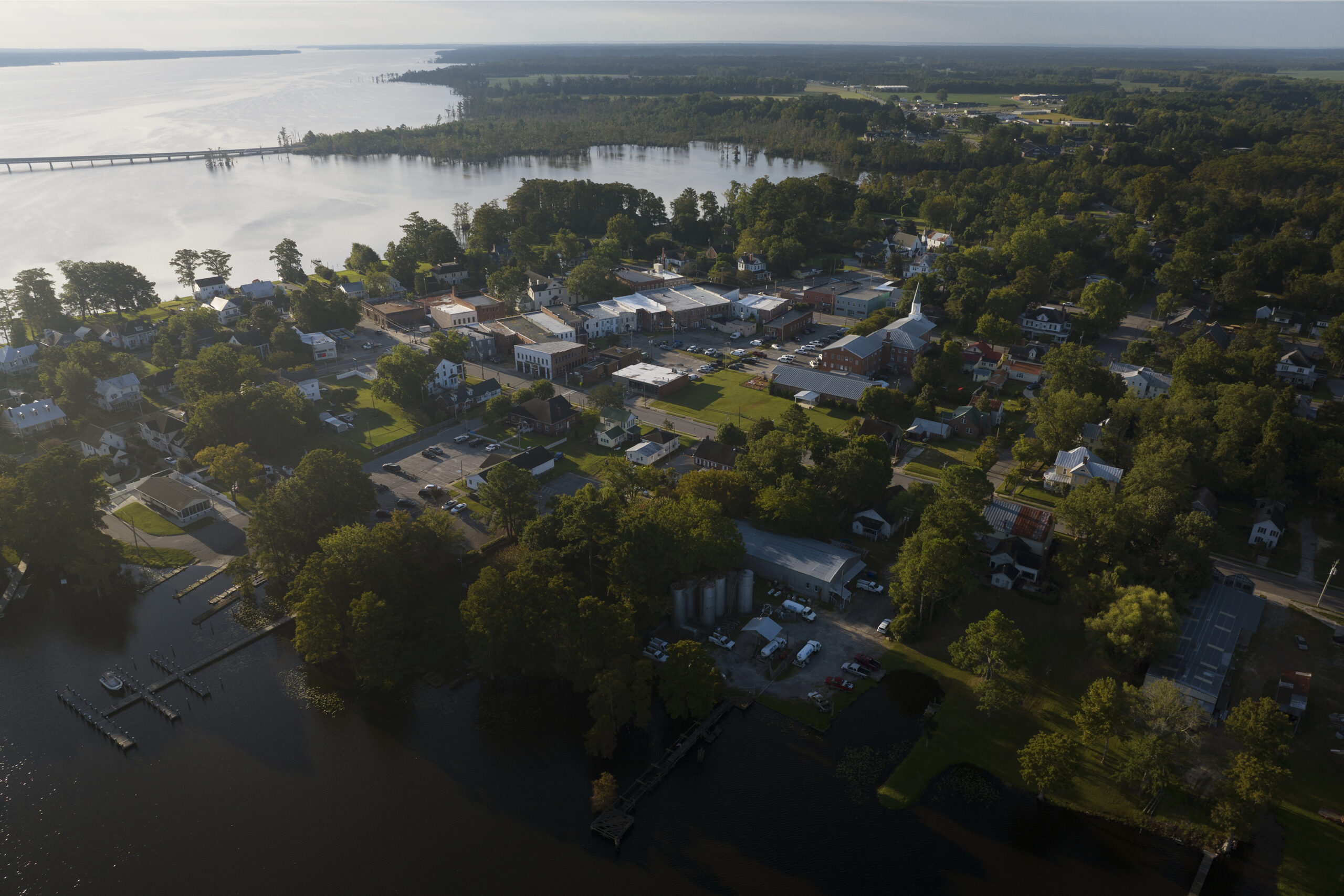 The PurpleAir project examines air and water quality in the Albemarle-Pamlico estuarine system, with a focus on the Chowan River. Not only does this region experience more blooms than other areas of the state, it also has a high prevalence of asthma among the population. Additionally, the size of the estuarine system — the second largest in the country — means that high wind and wave action can contribute to toxins moving easily through the river and its tributaries. 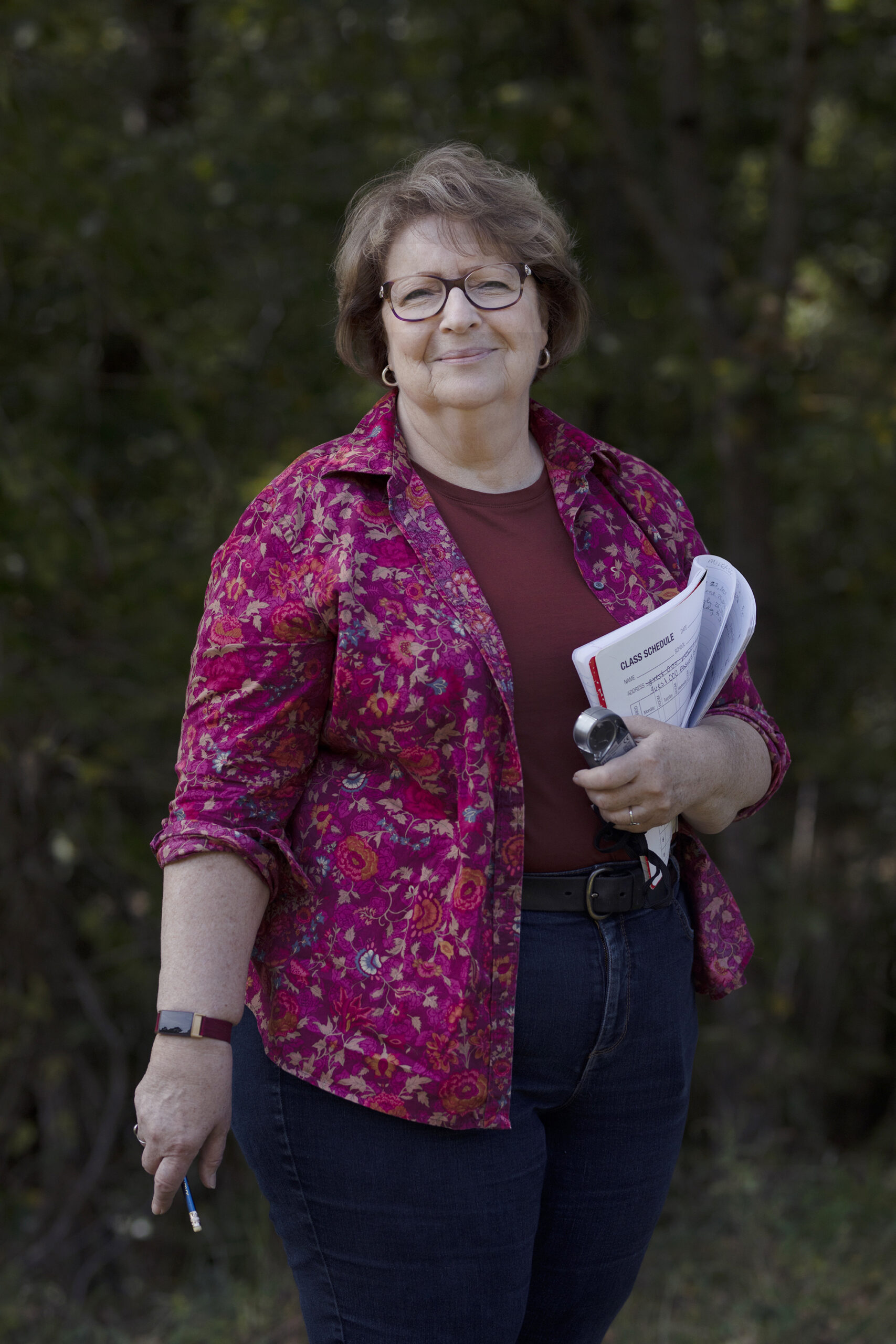 Karl (above), a former high school teacher and science outreach coordinator for NC State University, is passionate about introducing others to world of environmental research. Today, she brings that same energy to her work with the CEEG.

“One goal of the CEEG is to increase understanding of changes we experience in our local ecosystems. We all want the best environmental planning for the communities we call home,” she says. 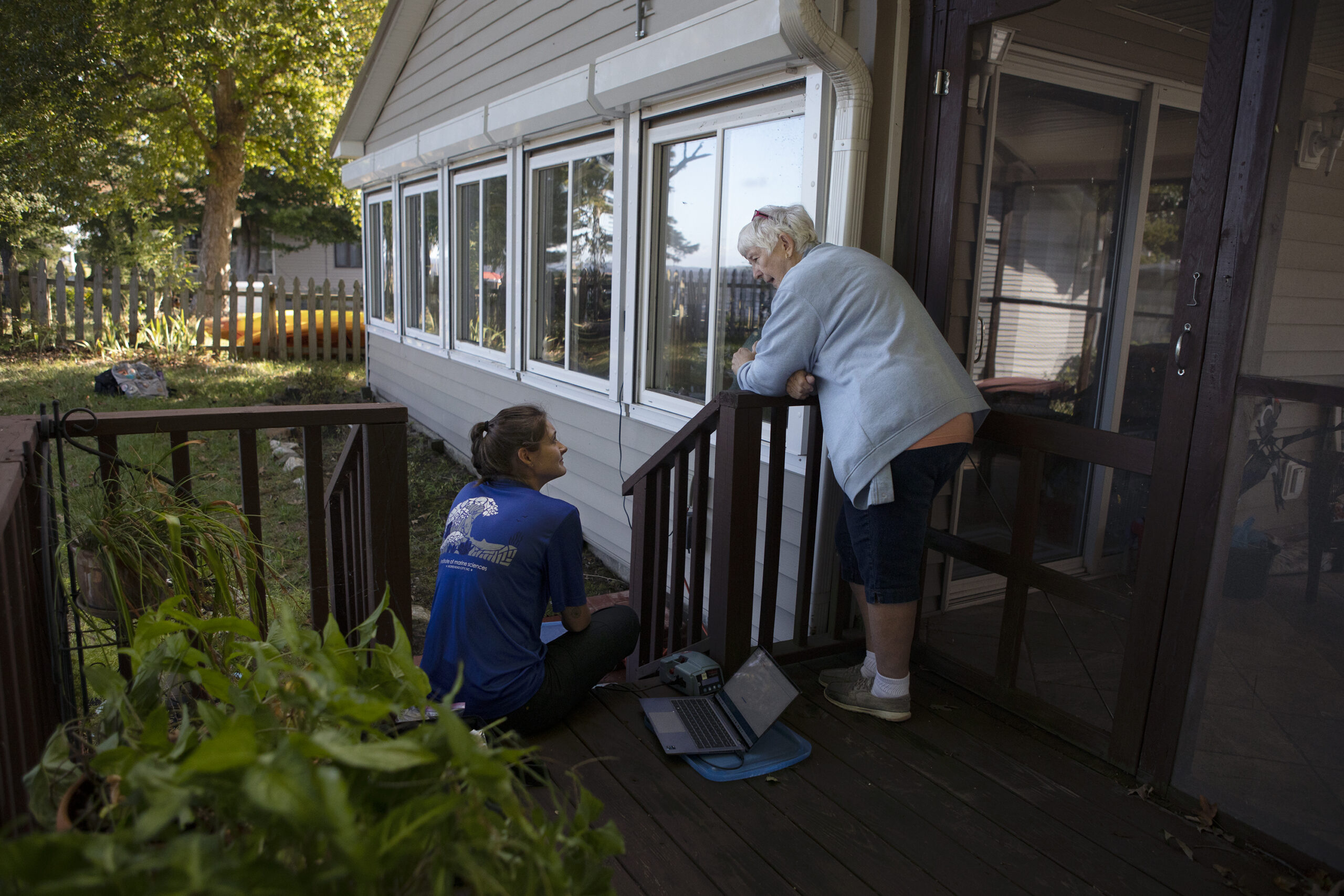 Here, Plaas chats with CEEG member Cathy Woody while downloading sensor data at her house. The team plans to deploy up to 30 sensors along the Chowan River. This project is being conducted for two years, but the sensors last far longer — providing valuable public data even after the study wraps. 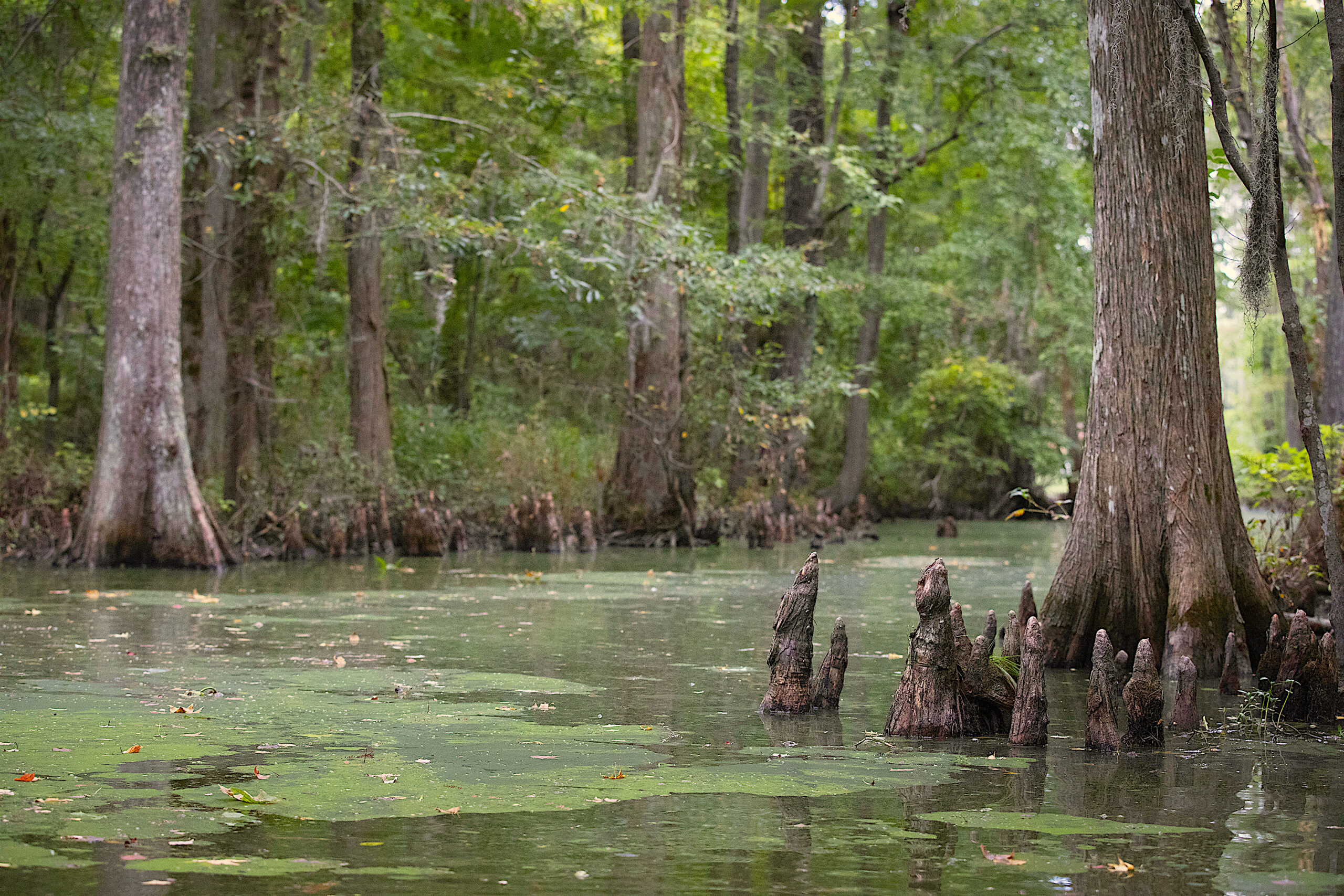 Above: Although the signs of a large bloom are obvious, smaller concentrations of cyanobacteria are invisible to the naked eye. Because of this, it’s important to not only know the visible warning signs, but also recognize when the conditions are ripe for a bloom. HABs thrive in slow-moving to stagnant, warm water with plentiful nutrient runoff. 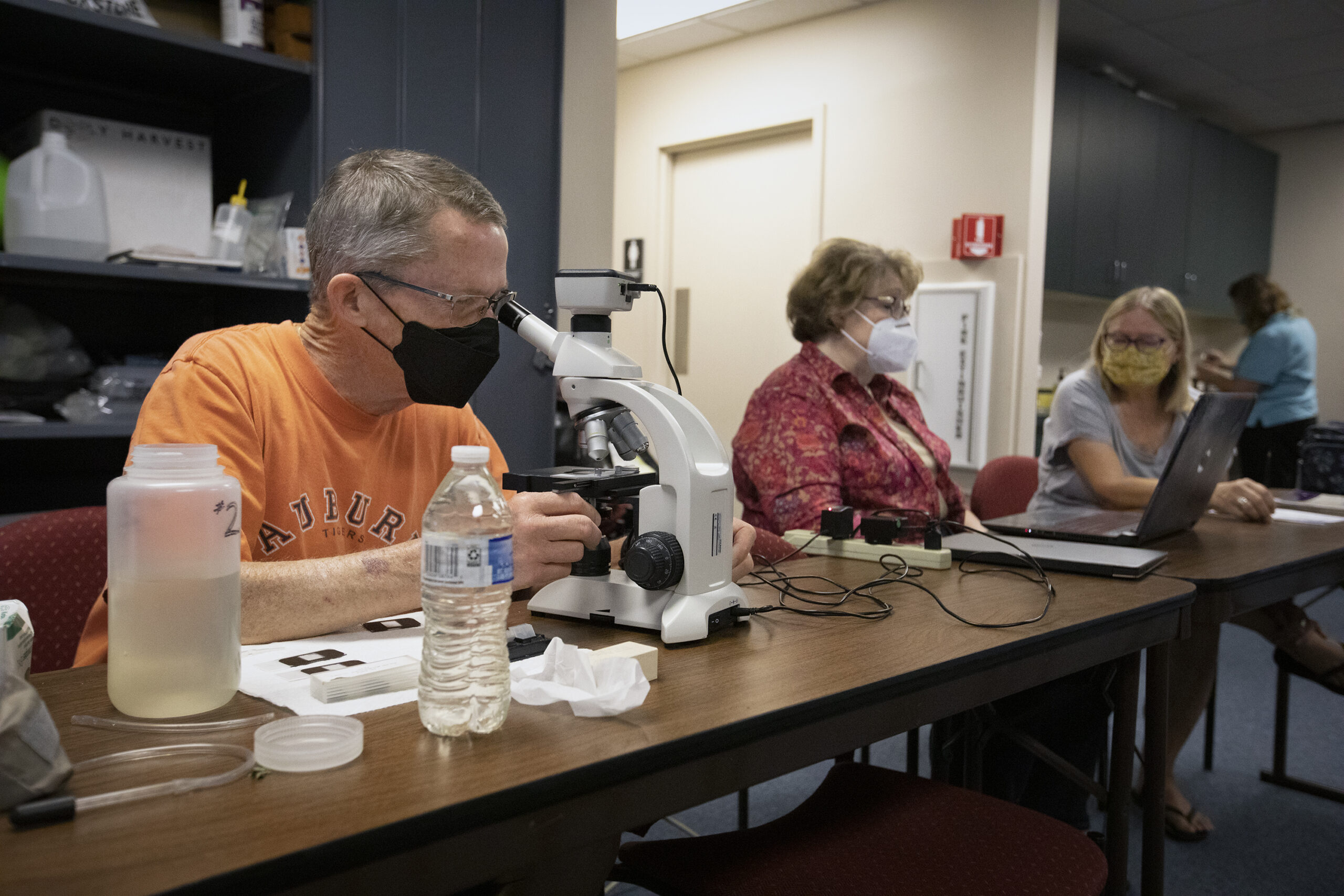 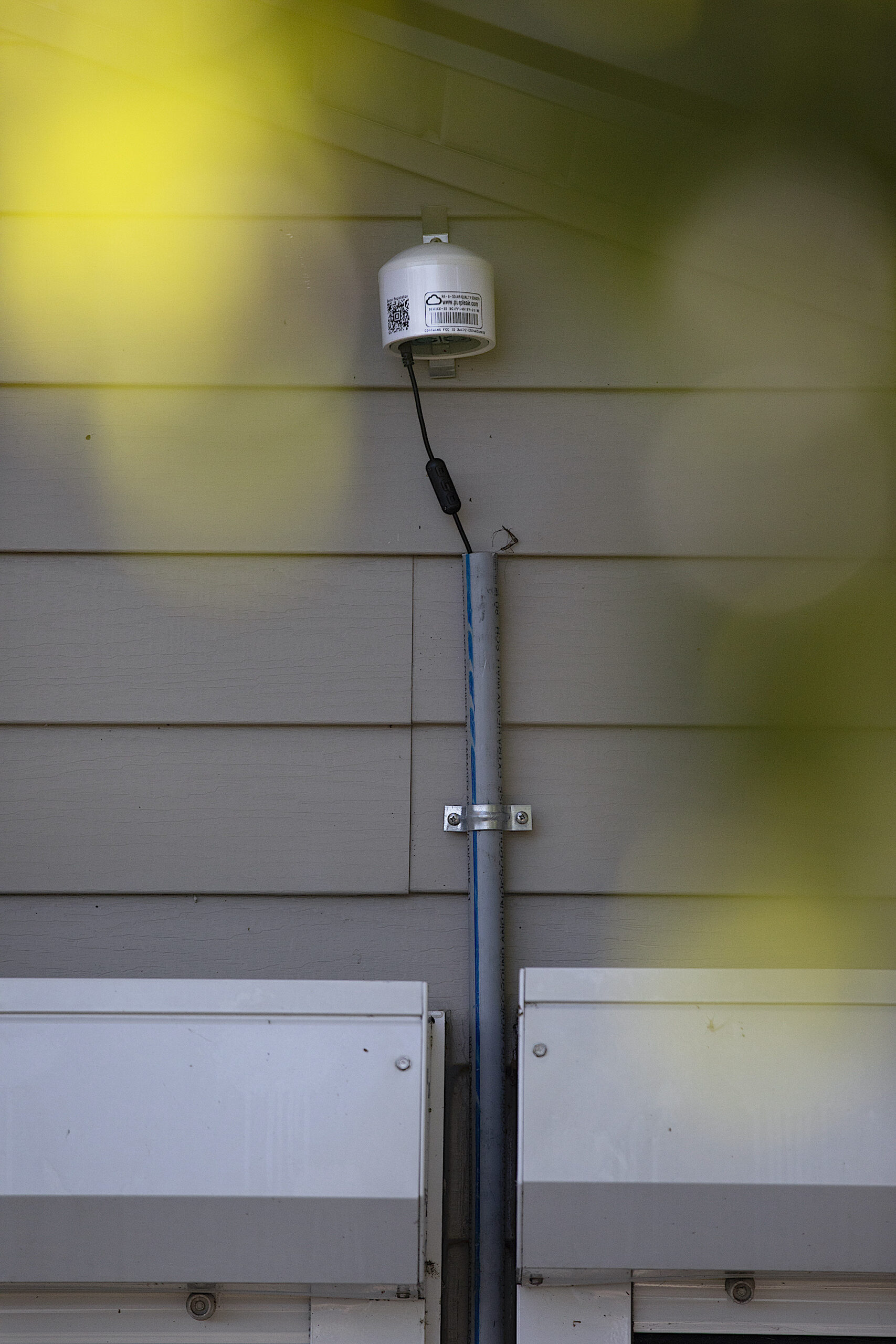 Sending data to the PurpleAir website every 10 minutes, the sensors measure the number of particles in the air, as well as humidity and temperature.

“We don’t have any information about aerosol composition from these sensors, we just know the amount that’s there,” Plaas explains. “But, since we’re looking over a big area and over a seasonal trend we’ll be able to see a cause-and-effect. If we see a bloom, then in the following days are we seeing increases in aerosol particles?” 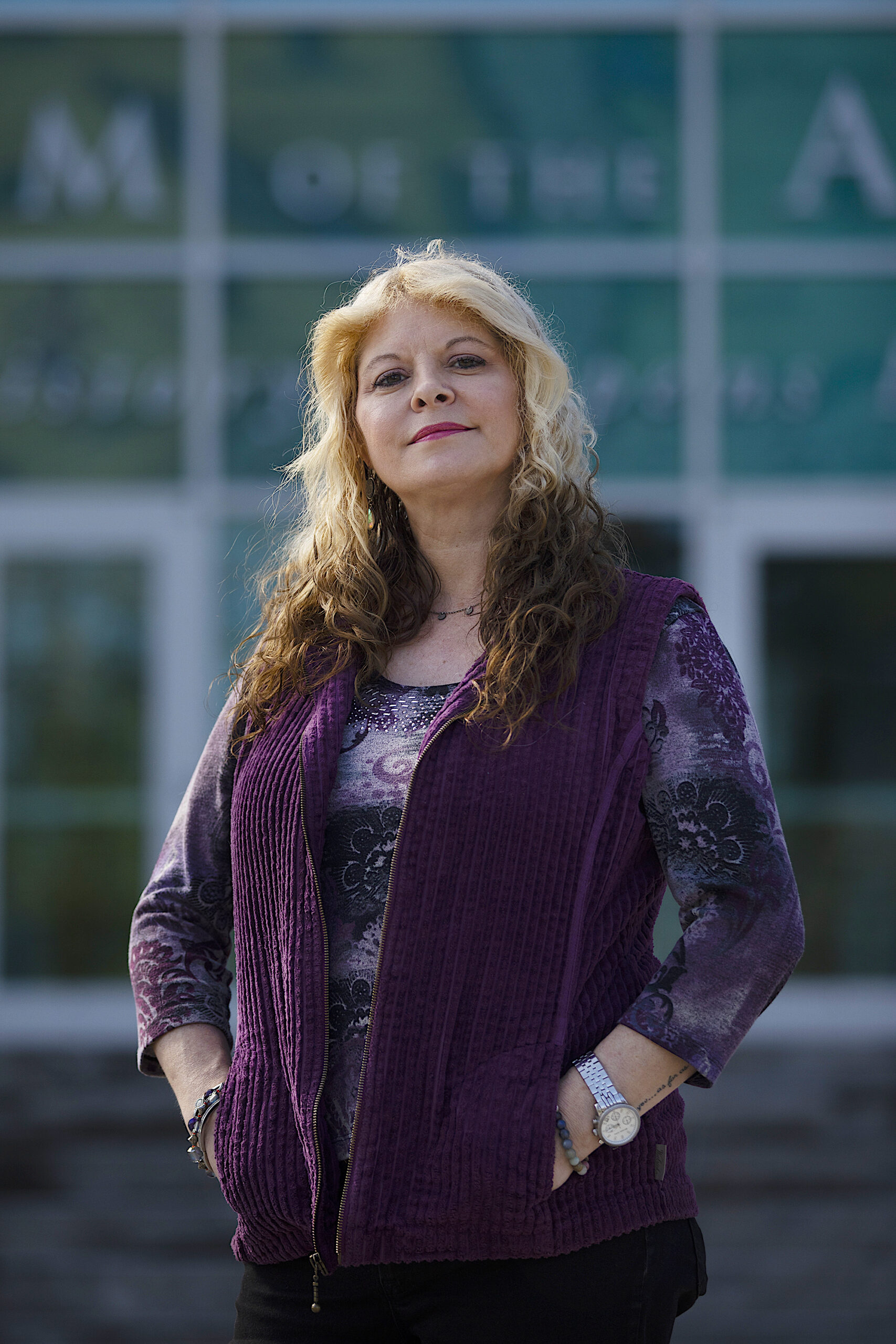 Barbara Putnam (here) is the operations manager at the Museum of the Albemarle in Elizabeth City. The museum serves 13 counties, interpreting and telling the history of the region. When Putnam was approached about hosting a sensor, she saw a connection between the air quality project and the mission of the museum.

“What better way to preserve history, even if it’s an environmental recording and not the recording of an artifact?” she asks. “You’re taking data from the environment and then creating a history of that.” 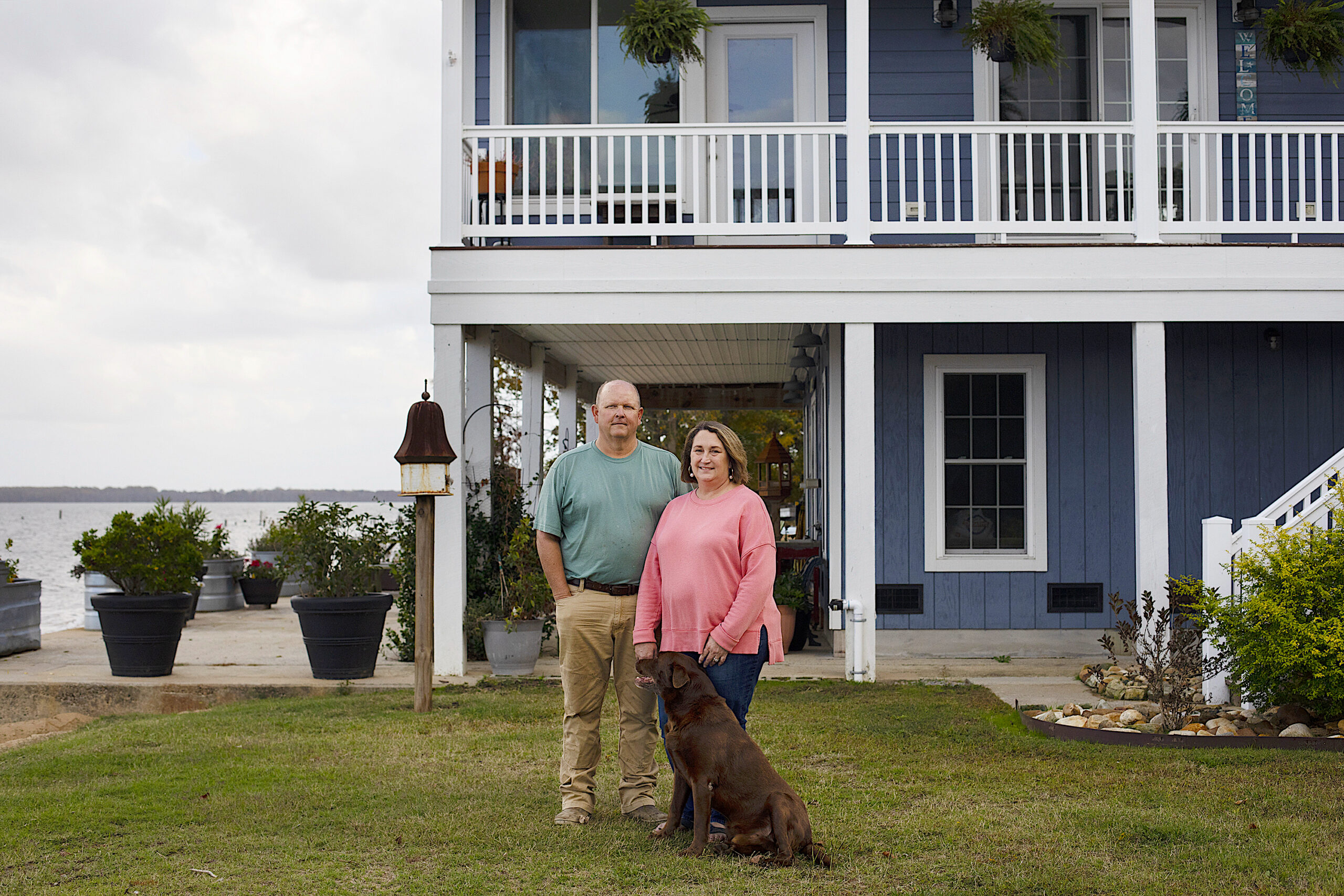 Chip Wynns grew up on the Chowan River. His family owned a ﬁsh company from the 1950’s until it was destroyed by Hurricane Isabel in 2003. He and his wife, Reba Wynns, have lived on the property since 2015. The Wynns’ love for the river made it an easy decision to host an air sensor. While they’ve seen water quality issues since living there, they say it’s much better than years past.

“The 1980s was horrible,” Chip says. “I remember it looked like fried eggs ﬂoating on the water. You could take a stick and pick it up it was so thick — slime, clumps, green, just nasty. There was a lot of debate about why. I think industries took a lot of the hit for that.” 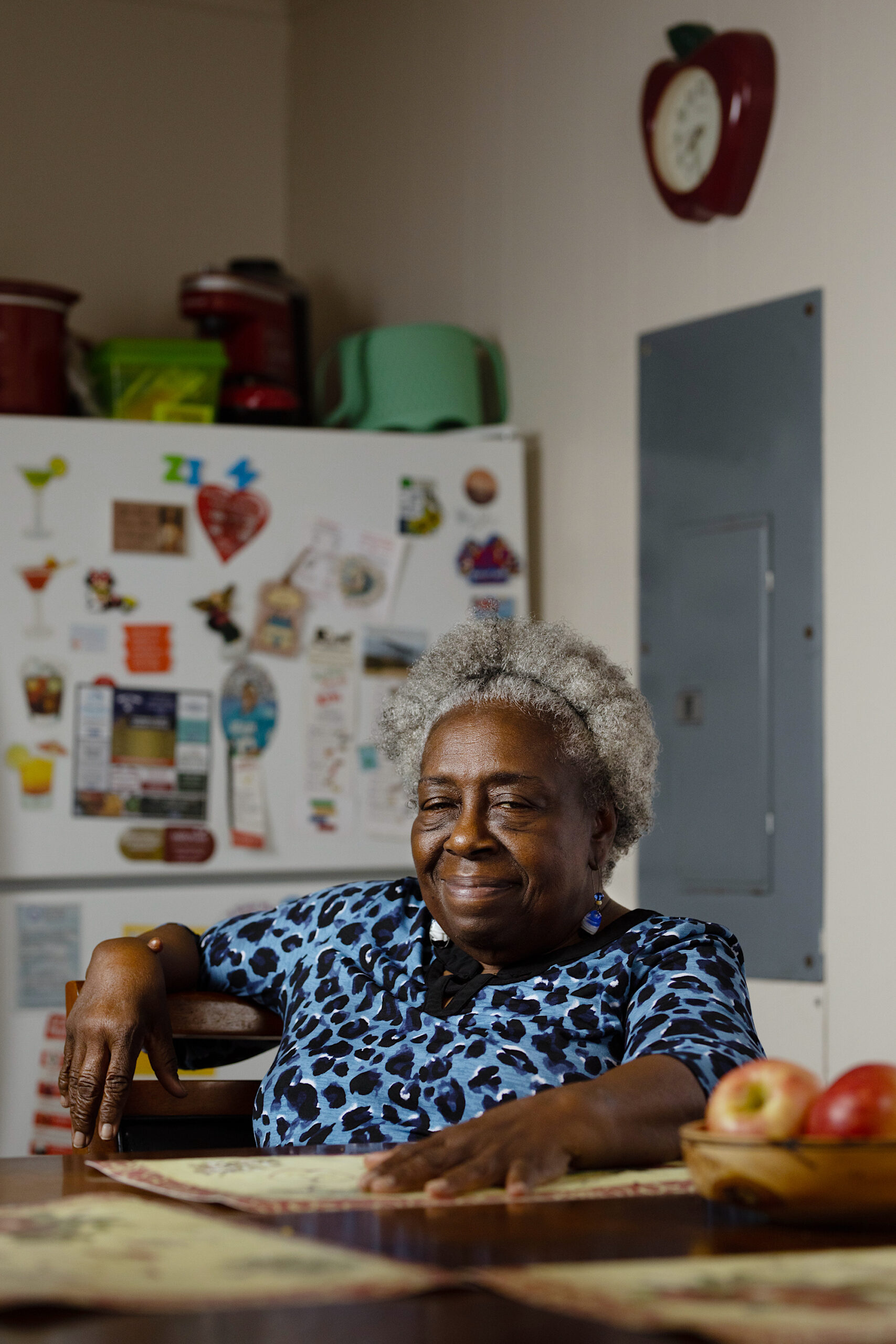 Lois Thompson (above) says air quality is a concern for not only her health, but also her 9-year-old grandson’s. That concern fueled her decision to host an air sensor at her home in Edenton. 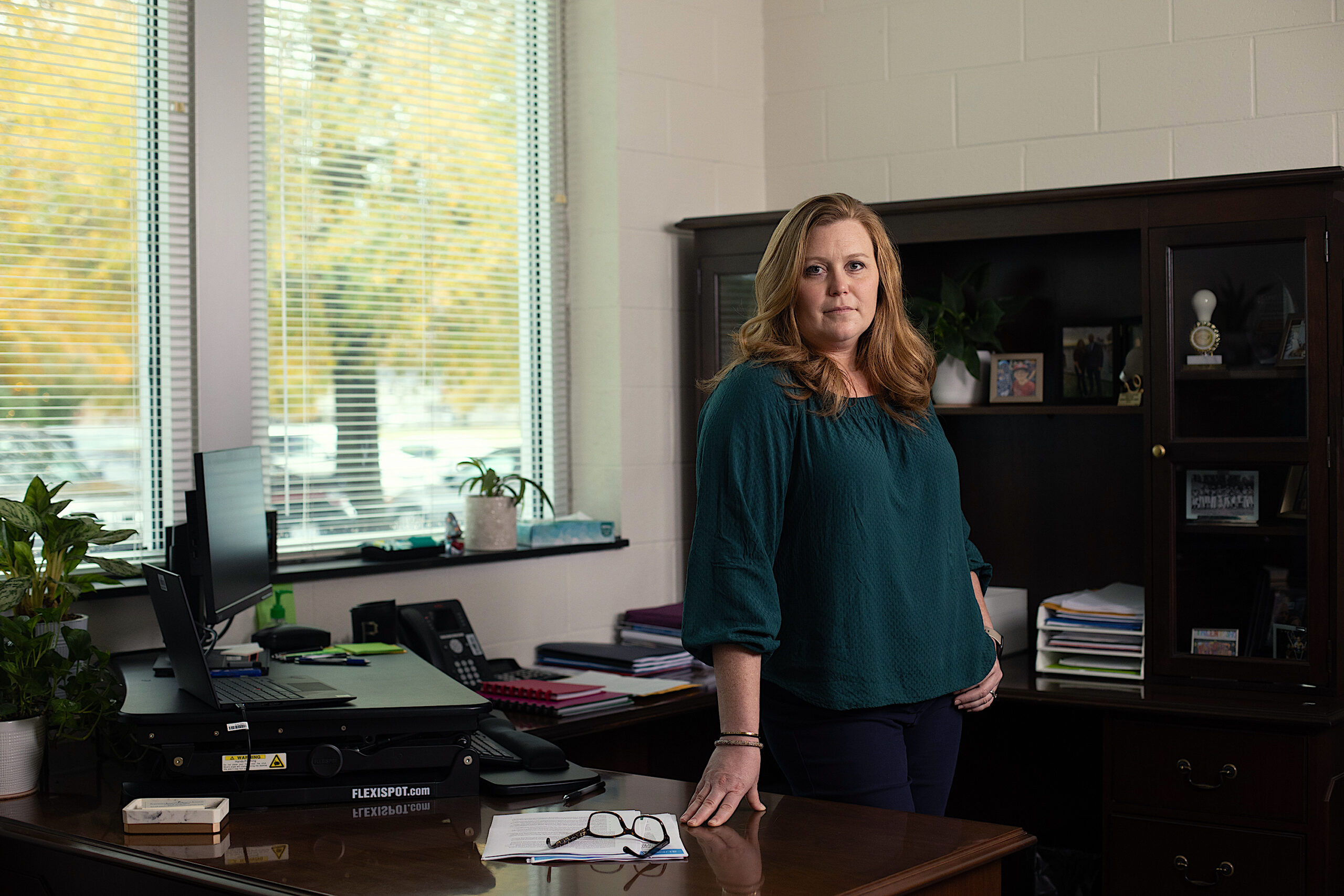 Albemarle Regional Health Services partners with researchers on a number of issues, including HABs. Besides the PurpleAir project, the public health facility is working with researchers at Duke University investigating the links between cyanobacteria and amyotrophic lateral sclerosis (ALS). Participating in research is a crucial part of serving the Albemarle community, says health director Ashely Stoop (here). 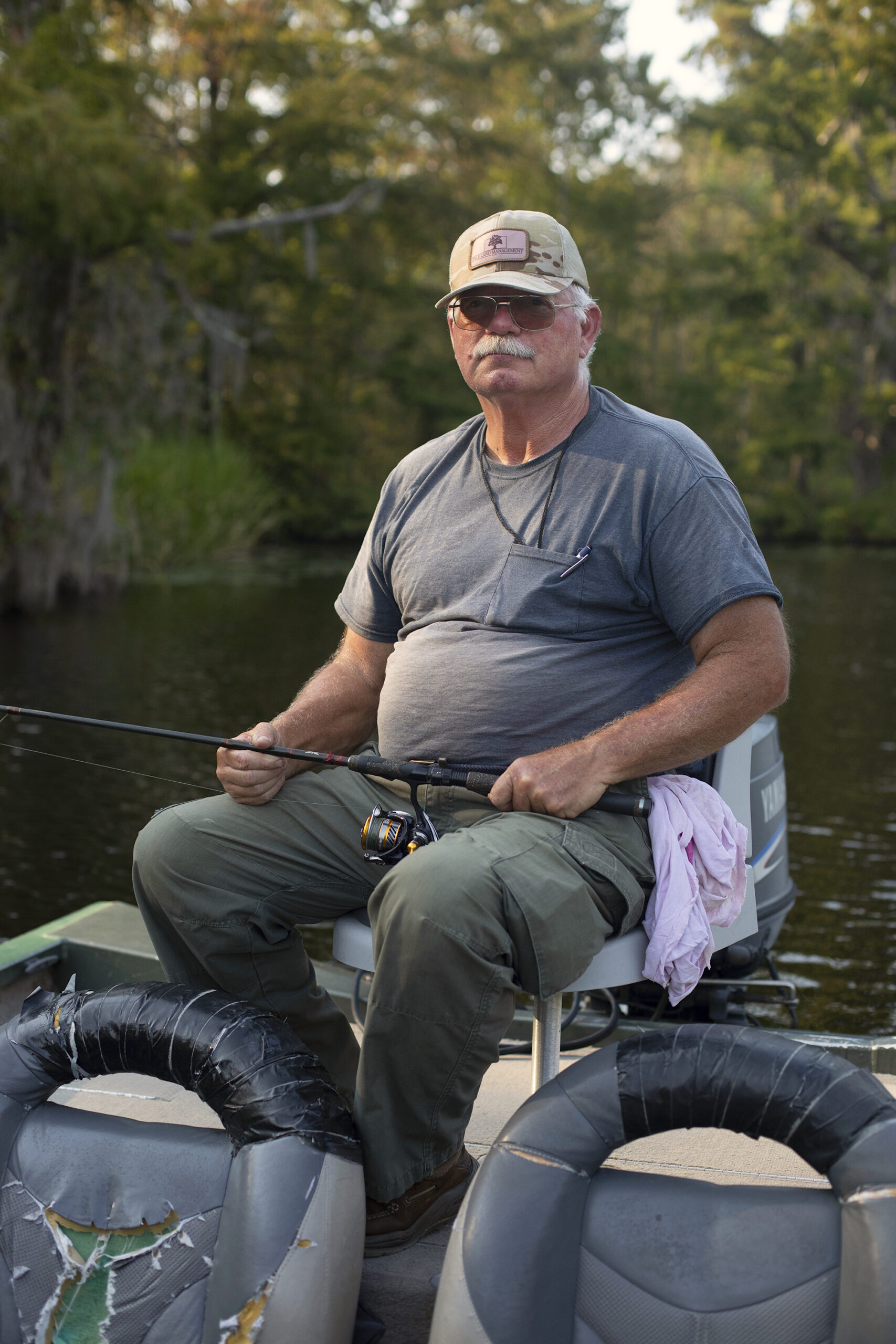 Stephen Hammer (above) has spent thousands of hours ﬁshing in North Carolina — usually in preparation for bass tournaments. With that much time on the water, Hammer and his peers can share updates to researchers and environmental groups.

“We’re looking at water quality all the time,” he says. “What color is the water? Is it moving? Is it coming in, is it going out? If you’ve got algae, you better move ‘cause you ‘aint gonna catch no damn ﬁsh.”

Fish and shellﬁsh can absorb toxins into their bodies, but little is known about the human health risks associated with consuming affected meat. The U.S. Food and Drug Administration recommends trimming the skin, fat, and internal organs — areas where toxins are most likely to accumulate — before cooking ﬁsh and to avoid eating the “mustard” of crab. The World Health Organization advises moderation in eating ﬁsh exposed to blue-green algae. 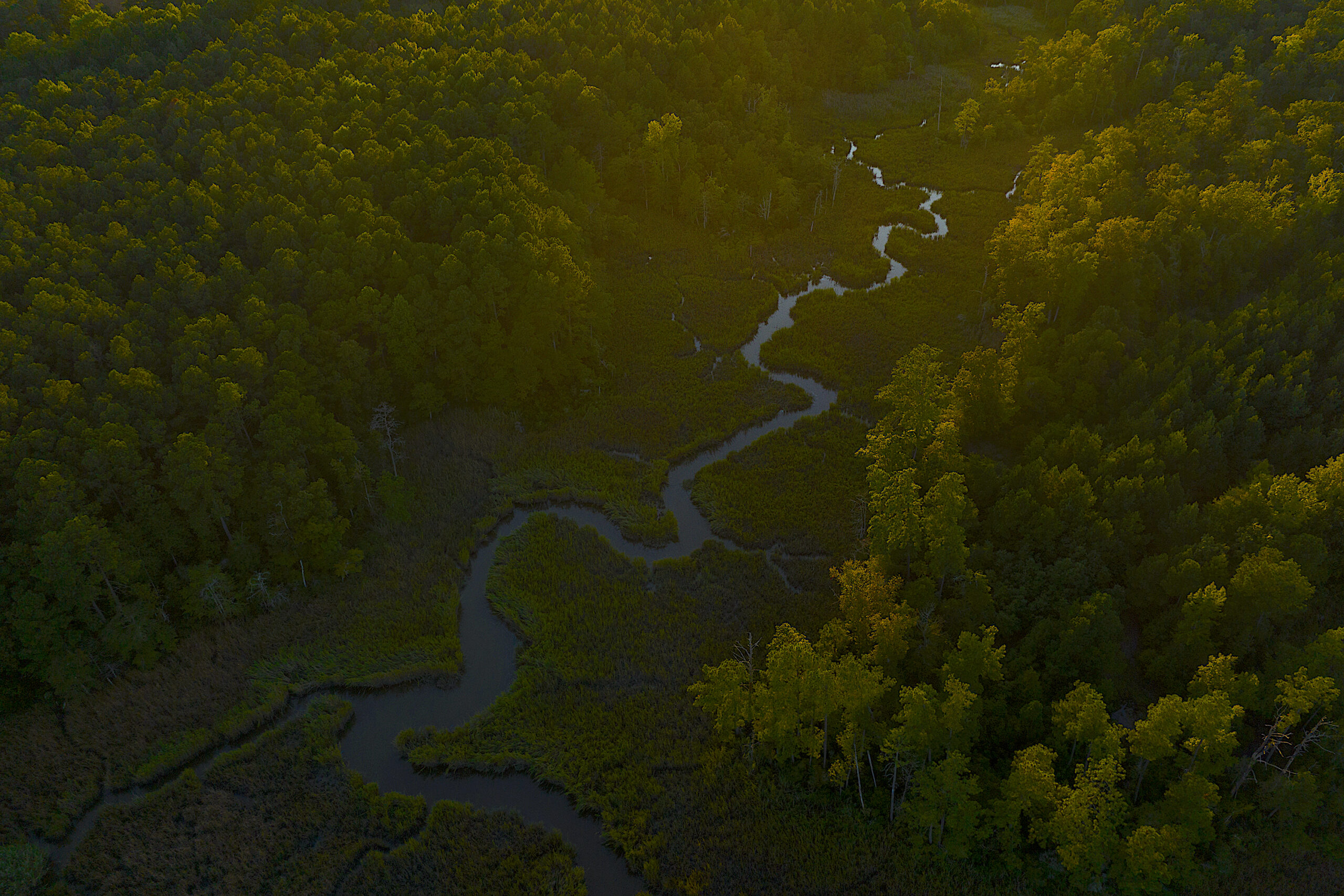 “I see the intention of science to be seeking knowledge to improve and better our societies,” she says. “I think the only way that you can really know if you are doing research that’s going to improve a community is if you’re getting constant feedback from them the whole time.”

Read Haley Plaas’s In Full Bloom from the Spring 2021 issue of Coastwatch.

Megan May is a science communicator specializing in photography and videography. With a background in journalism, she has a passion for collaborating with researchers to translate their work to the public through visual mediums.